There once was a farm that became an airport. So reads the first line of our modern fairytale, our religion for the age. It is also the promotional tagline chosen by the boosters of Pittsburgh’s airport, where a pair of signs sporting the slogan hang throughout. These Extraordinary Times: Indigenous Peoples and Coalition Building for Agroecology and Food Sovereignty

In this post I aim to elaborate my belief that, to build or spread food sovereignty, there is an increased need for diverse Peoples, communities and social movements to strengthen relationships and coalitions with one another. Our exchange of knowledges, strategies and practices will keep producing tangible results, and on the less tangible but equally important side, our solidarity will reinforce our resilience in the face of increasing unpredictability. What do we “get”? What is our gravity? What draws us together is the natural instinctive understanding that food is the staff, the stuff of life. The technique, called hugelkultur (HOO-gul-kul-tur), has the advantage of being simple to understand and easy to make, and lasting a long time. Hugelkultur beds basically involve piling wood – usually dried logs of various sizes – into a single ridge, piling vegetation, cardboard or newspaper over that, and finally a layer of soil on top. 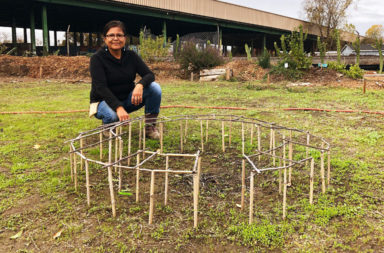 Farming in the Fog