Brian Czech once likened modern economic growth to a runaway train. This metaphor drives home the point that to save nature and humanity from an ecological train wreck, the most important thing is to decelerate the global economy. Unfortunately, much writing on environmental protection neglects this imperative and fixates instead on what we must accelerate.

For example, the must-read Living Planet Report, published last month by the World Wide Fund for Nature (WWF, formerly known as the World Wildlife Fund), uses variants of the word “accelerate” five times, but never “decelerate” or synonyms like “slow down.”  In his introduction, Marco Lambertini (WWF’s director general) calls for “innovation and acceleration towards sustainable production and consumption behaviours”.

Yet when it comes to economic activity, “innovation and acceleration” hardly evokes the proper attitude. What we really need is “exnovation and deceleration.”

I wonder if the WWF was influenced by the Ecomodernist Manifesto.

A group of “scholars, scientists, campaigners, and citizens” came together in 2015 to publish the Ecomodernist Manifesto.  Their stated goal is similar to that of steady staters – “to make life better for people, stabilize the climate, and protect the natural world” (page 6).  They cite motivations including “deep love and emotional connections to the natural world” (page 25), and “enduring commitment to preserve wilderness, biodiversity, and a mosaic of beautiful landscapes” (page 27). 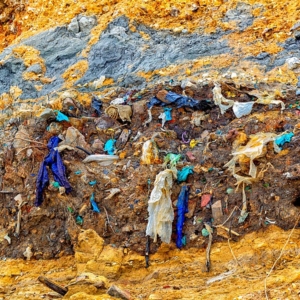 Overall, the authors “affirm one long-standing environmental ideal, that humanity must shrink its impacts on the environment to make more room for nature”.  But they emphatically “reject another, that human societies must harmonize with nature to avoid economic and ecological collapse” (page 6) . Instead, they advocate for “knowledge and technology, applied with wisdom”, to “allow for a good, or even great, Anthropocene.”

It seems to me that love of nature should motivate us to strive for a short Anthropocene epoch, to be followed by something much better; that is, an Ecozoic Era.  I also take issue with the ecomodernists’ refusal to countenance any limit to the scale of economic activity on Earth. They imply that we can and should achieve the first “long-standing environmental ideal” mentioned above–to shrink our environmental impacts–without decelerating the economy.

Despite the fact that we are right on track to fulfill the bleak projections found in The Limits to Growth (1972), the ecomodernists disparage “assertions starting in the 1970s of fundamental ‘limits to growth…’” (page 9).  Instead of degrowth toward a steady state economy, they urge faith in “accelerated technological progress” (page 30).

The Race between Growth and Efficiency

What are the prospects for a purely “accelerationist” approach to reducing our environmental impact?  To answer this question, we must first determine how much reduction will be enough.  Ecological footprint and greenhouse gas emission calculations provide us with essential clues.

Conservation biologists have rallied around the idea of giving half the Earth back to our fellow ten million species.  “Nature needs half,” in other words. This suggests reducing humanity’s ecological footprint from its current state of massive overshoot to just half of Earth’s biocapacity.  To achieve this by 2050 means hacking around four percent a year off the global footprint from now until then. Meanwhile, to keep global heating below 1.5° C, we must slash greenhouse gas emissions by five to ten percent per year. 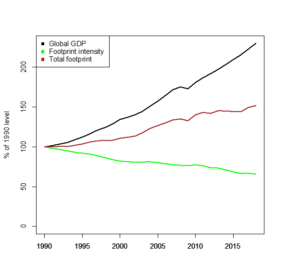 Our economic system does have some cost-cutting incentives for reducing environmental intensity, but these incentives are largely incidental and insufficient.  The classic example is when the profit motive drove 19th-century industrialists to adopt one technological invention after another, each reducing the amount of greenhouse-gas-emitting coal required to manufacture a given amount of goods.  And yet the past three decades have only seen footprint and greenhouse-gas intensity fall by 1.3 percent a year.

Rather than betting everything on the prospect of ramping up the rate of efficiency improvement by 400 to 900 percent worldwide, it would be far more prudent to scale down production while simultaneously adopting specific new technologies. Most obviously, we need to transition from fossil fuels to renewable energy sources.

How best then to achieve the degrowth we need until 2050, after which we can perhaps settle into a sustainable steady state?  To answer this question, we must decompose the size of the economy into its basic determinants:  population, employment, working hours, and labor productivity.  “Population” of course means simply the number of people.  “Employment” is the proportion of those people who work for pay.  “Working hours” tally the average annual number of hours per employee.  And “labor productivity” signifies the average amount of economic production per hour worked.  Multiply these four determinants together and you get the size of the economy, or GDP.

Of course we need to stabilize and then reduce population size.  But doing that in a fair and just manner is a long-term project and cannot be relied upon solely to achieve the 2050 imperatives for footprints and emissions. 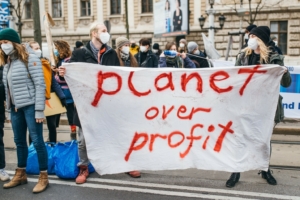 What about employment?  In our current system of political economy, reducing employment is a recipe for misery.  A better system, for example one that supplied a universal basic income, would afford more people the freedom to quit jobs that violate their dignity and ethical standards.  Nonetheless, it seems intuitive that most people would want more than a “basic” income, and thus still seek some kind of employment.

Far less necessary for—and indeed, often injurious to—human wellbeing are working hours and yes, even so-called labor productivity.  Shifting our economy from consumer goods, which we already have too much of, to “care, craft and culture” would enhance human well-being, albeit while reducing labor productivity.

Reduction in working hours arguably holds the most promise for achieving the post-growth, steady-state outcome we strive for.  Working hours have a tighter statistical connection to ecological footprints than do employment or productivity.  After controlling for idiosyncratic differences between countries and years, each one percent decline in working hours leads footprints to shrink almost as fast (0.98 percent).  In contrast, a one percent reduction in employment or productivity has reduced footprints by only 0.62 or 0.35 percent (respectively), on average.

Furthermore, lots of people want their working hours reduced.  Indeed, where ordinary people and especially workers have more power, they use that power to gain more “leisure” time.  It would seem, then, that labor unions, worker cooperatives, and other instruments of economic democracy will greatly improve our chances of cutting ecological footprints, greenhouse gases, and other environmental impacts down to size.