Ed. note: Parts 1, 2 and 3 of this series can be found on Resilience.org here, here, and here.

Oil Production in Russia and Asia

Figure 1 is a graph of the historical oil production for the FSU/Russia from 1973 through the first quarter of 2022 (Graphs in this report are personally prepared graphs from U.S. DOE/EIA data unless otherwise specified): Most of the FSU’s oil production from the 1970s until the breakup of the Soviet Union in the early 1990s was from what is now Russia.  In 1992, after the collapse of the FSU, the Caspian Sea region produced about 10% of what Russia produced in 1992. Since roughly the year 2000, there has been a full court press to produce oil in all of Russia.  Along with expanding exploration and production within Russia, new technologies have been used in the last few decades to maximize oil production. Many elephant fields have been discovered in these basins including Samotlor (22 Gb-seventh largest field in the world), Romashkino (16.5-17.2 Gb) and numerous others.  In 2013, the West Siberian Basin produced 6.2 mb/d and the Urals-Volga region produced 2.2 mb/d.  That represented 84% of Russia’s total oil production in 2013.

West Siberian Basin oil production has dropped about 10% over the last decade due to depletion and rising water levels in the oil reservoirs.  The United States Geological Survey (USGS) has estimated an ultimate oil recovery for the basin at approximately 200 Gb.  Realize that the USGS has a history of inflated oil reserves estimates so if anything, I would consider that the 200 Gb figure is on the high side.

The Urals-Volga region was discovered in the 1920s and has been extensively explored.  Production reached a peak in the late 1960-early 1970s at approximately 1.6 mb/d.  Production declined to under 300,000 b/d in the 1990s but has since rebounded with considerable advanced technology.

The Romanshkino oil field is the largest field in the Urals-Volga oil region and has produced over 15 Gb of oil.  It has a EUR of 16.5-17.2 Gb so there is still oil to be extracted but a lot less than in the distant past.  Approximately 87-91% of the initial amount of oil has been extracted.

International oil companies became interested in developing oil and gas in the Sakhalin Island region off the east coast of Siberia in the early 2000s.  Two projects: Sakhalin I and Sakhalin II were the result of that interest.  The region produced 348,000 b/d in 2018 and 258,000 b/d in the first 2 months of 2022.

ExxonMobil and Shell announced plans to exit the projects in May 2022 due to the Russia-Ukraine conflict which led to a significant oil production decline in May, particularly the Sakhalin I project. The EUR for the region is reported to be ~2.3 Gb.

Russia has only barely explored producing tight oil from fracking.  In 2019, Vladimir Putin said Russia would never go the fracking route because they don’t have to and because it’s bad for the environment.  That said, Gasprom (an oil and gas company based in Russia) has been working on horizontal drilling and fracking since 2016.

The U.S. DOE/EIA obtains their reserves estimates from the USGS which, as I’ve stated, tend to provide inflated oil reserves estimates.  As of 2013, the U.S. DOE/EIA had reduced the reported estimate of Caspian Sea region oil reserves to 48 Gb of recoverable oil.  A study by the oil consulting firm Wood McKenzie back in the early 2000s put the recoverable reserves for the region at 39.4 Gb.

Figure 4 is a graph of oil production from the Caspian Sea region from 1992 through the first quarter of 2022: Oil production within China has historically been dominated by the Daqing oil region.  The impression given by the media is that it is one field but there are actually many fields within the region.

The Shengli oil region is the second highest producing region in China and was discovered in 1961. It contains many oil fields as well.  In the early 1990s, it achieved a production rate of approximately 670,000 b/d.  In 2002, the production rate was 534,302 b/d.  Figure 7 is a graph of Shengli’s historical and projected oil production: Media reports indicate that the Shengli oil region is being developed for tight oil production. 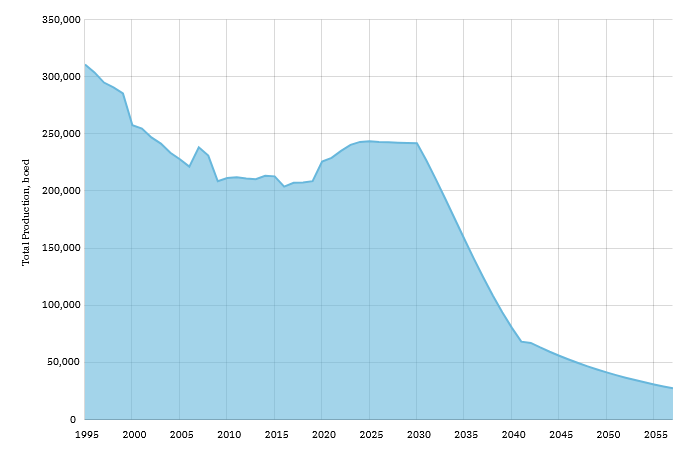 An oil producing region that has gained prominence in China more recently is the Changqing oil region.  It was discovered in 1971 and started producing oil in 1975.  For the period 2012-2017, it produced an average of about 475,000 b/d of crude oil and apparently has continued producing at that rate to the present.

China started to develop offshore oil in the early 1980s and production has become significant in the last few decades.  The China National Offshore Oil Company (CNOOC) produces oil from the Bohai Sea, Western South China Sea, and Eastern South China Sea.  Figure 9 is a graph of their production from 2010 through 2021. The CNOOC is projecting an oil production peak by 2030.  It’s reasonable to expect offshore oil production in China to decline in a pattern similar to that of the North Sea.

China is heavily dependent on oil imports.  Because of that, there is a strong push to produce as much oil as possible within China.  The oil industry in China is projecting to spend approximately $125 billion on oil exploration and development for the period 2020-2025 and drill approximately 118,000 wells.  Maybe the Chinese oil industry can hold off declining production for a while with an extreme effort but there are too many regions within China where production is declining to hold it off for long. Figure 11 is a graph of Southeast Asian oil production from 1980 through the first quarter of 2022: The only country that had more than a trivial increase in oil production from 2021 to the first quarter of 2022, more than a 2,000 b/d increase, was China, with an increase of 196,000 b/d.  Most of the countries experienced production declines from 2021 to the first quarter of 2022 including Indonesia, India, Australia, Brunei, Thailand, Burma and the Philippines.

Five of the countries associated with the Figure 11 graph have been in decline since before 2006: Indonesia, Australia, Brunei, Malaysia, and Vietnam.  Figure 12 is a graph of production for this group of countries from 1980 through the first quarter of 2022: Indonesia’s oil production reached a maximum of 1.69 mb/d back in 1977.  Indonesia has been on a fairly steady downward trajectory since the late 1990s as Figure 14 illustrates: Australia has been in general oil production decline since the year 2000.  Figure 15 is a graph of Australian oil production from 1980 through the first quarter of 2022: Oil companies are actively fracking wells within Australia but it hasn’t translated into increased oil production.  It appears that a lot of the fracking activity is associated with natural gas.

Another country that has fallen into decline in recent years is Malaysia.  Figure 16 is a graph of Malaysian oil production from 1980 through the first quarter of 2022: The most significant oil regions in the world have been highlighted in the first 4 parts of this report.  Hopefully sufficient evidence has been presented to argue that there are serious oil depletion problems in numerous regions around the world and that there is significant likelihood that global oil production will decline further from the 2018 maximum and possibly decline at a fairly rapid rate in coming years.  I expect to see significant upward pressure on oil prices in the future as well.  So how do the alternatives to oil look?  We’ll see in Part 5 of this report.