After forty-one years of drinking alcohol, I stopped six months ago. I’d done a couple dry Januaries and found that during the other eleven months of the year I had trouble limiting myself to five drinks a week. I figured it’d be easier to do zero than five, and I was right, at least after I got through the initial eight weeks. And every month since it’s gotten easier. 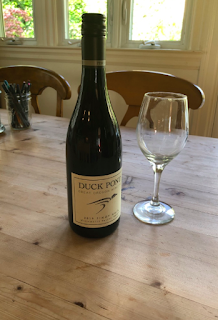 After forty-three years of driving, my husband and I went car-free last summer in San Francisco. There are parallels. Hang with me.

I started drinking alcohol in college at age eighteen. This was relatively late for my generation. As with most people, I saw alcohol as a mark of adulthood, good for socializing, relaxing, and easing stress.

I knew alcohol was prevalent in American culture, but once I went off it, how much reinforcement there is for drinking really slapped me in the face. It is inhospitable for a host/hostess not to offer their guests alcohol. Period. In restaurants waiters are visibly disappointed that your dinner bill will not include $25 for two glasses of wine. Friends suggest bars as a natural place to meet up in the evening. Within half a mile of my house there are two grocery stores, three corner stores, and four liquor stores that, combined, offer far more shelving feet of alcohol for sale than nutritious food. (Don’t get me started on the food deserts of impoverished neighborhoods.) Bottles of alcohol are on maximum view in every bar and restaurant (are that evening’s vegetables so elegantly displayed?) and pre-Covid, the quantity of alcohol consumed before, during, and after plane flights was frankly astounding. Remember all the chuckles and cute memes about quarantine drinking? Binge drinking went through the roof this past year, especially among women.

In TV and movies the characters show they’re having a good time by drinking. Alcohol ads oriented towards women paint pictures of intimacy, romance, and friendship. Alcohol ads promise men status, friendship, and sex. In social media, friends and family take selfies with their drinks to prove they’re having a good time. Our culture is saturated in alcohol, and if you don’t believe it, go off alcohol for a month and see how many times you are invited, encouraged, reminded, or pushed to have a drink. Even more annoying, some people may assume you have a psychological disorder since “normal” people choose to drink. And then you’ll hear at length why drinking is fine for them since they have no problem with alcohol. (Since I’ve done this to other people, it’s likely fitting that I’m now on the receiving end.)

And our society is largely unconscious of all of this.

And yet. And yet alcohol is toxic to the human body. Small doses are a little toxic; large doses are very toxic.

One of the biggest reasons I went off alcohol was middle-of-the-night insomnia. I was already meditating and exercising daily but still I would wake up at 2 am. Six months later, my sleep has vastly improved, but even better has been the benefits to my spiritual journey. I feel more connected to nature; I feel more connected to grace. I’m more conscious now of when I’m choosing between love and fear and I now more often manage to opt for love. Maybe this self-acceptance and heart-opening would’ve happened anyway, I can’t say for sure. I mention this knowing that many will have no idea what I’m talking about. That’s okay. The path is a breadcrumb trail, and those inclined to follow it will.

Still, I’m very conscious that by not drinking I’ve put myself outside normal human experience. And I’m still working to accept that people are puzzled and even disturbed by my choice, even as I used to be when I ran across someone who didn’t drink.

I was thrilled to get my driver’s license at age sixteen. It’s one of the most profound rites of passage we have for teenagers. A license means independence, power, and status! A heady brew indeed. Even though my family of six scraped along with just one car, and I had to wheedle my parents for every minute of driving I got, since I lived in a suburb with no public transit and no safe biking, that license significantly changed my life.

And so over the years I drove and drove and drove, even after moving to a city. Road trips, daily commute trips, and transporting children trips. (Trips to the orthodontist were nearly endless.) I saw cars as convenient, safe, and necessary because even though I lived in one of the densest places in North America, my way of life was still designed around a car. In fact, I chose my children’s schools partly based on how easily I could drive there and park.

Before we went car-free, my husband and I spent a few years seeing how little we could drive as a kind of hobby. We’d long been bicyclists, but after we both got electric bikes it became faster to get almost anywhere in the city by bike instead of car. When we traveled, we tried not to rent a car but instead took rail or light rail, a Lyft ride or two, and did a lot of walking. 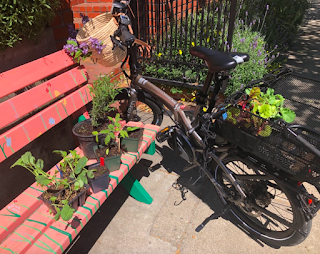 I’ve found that not driving has embedded more exercise in my daily life. It’s made me more connected to the nature around me, even in my urban neighborhood. (There are trees! Birds! Flowers! Stars! The Moon!) I’ve also discovered that not driving has improved my character. I’m less impatient, less aggressive, and less hostile as I travel. I’m more likely to see my fellow human beings on the street as equals rather than obstacles. Whether on foot, public transit or my bicycle, I’m not both powerful and anonymous like I am in a car. (Power and anonymity are not a good combination for the human psyche.) There’s more mutuality, more sense of sharing the street space rather than pushing through and dominating it. Though San Francisco has considerable problems with drug addiction, homelessness and encampments, when I walk or bike I generally only feel threatened by the actions of drivers encased in thousands of pounds of metal. 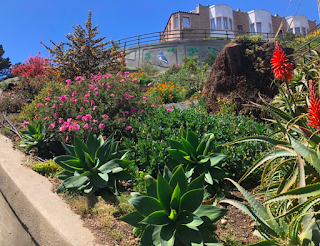 Car driving is reinforced in our society every which way we look. Literally. The basic design of our neighborhoods, our streets, and our cities is created to accommodate cars. In San Francisco a quarter of all land is dedicated to car driving or parking. Just like alcohol, cars are constantly sold to us. Women are told a car means safety, convenience, and status while men are promised sex, domination, and status. I rarely watch commercial tv, but my husband is a fan of sports. When I sit down with him in front of a football game I feel absolutely bombarded by car and beer ads. These ads aren’t random: they work. Indeed, one fourth of the cost of a new car is the cost of marketing and advertising. (Thought experiment: if car and beer advertising went away tomorrow, would there be any professional sports left?) 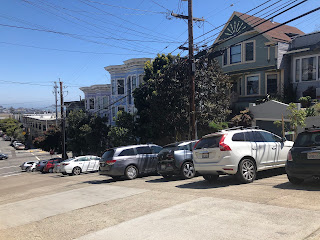 Best use of space?

Our culture is saturated in cars. Parking lots dominate our public spaces, and children spend more time strapped into carseats than in active play. The only place you can get away from cars are public parks/beaches/forests that offer good hikes. If you don’t believe me, try going car-free for a month. Impossible, you say! You live miles from where you work and shop. (Or, what I hear most often, you’d get killed by one of the crazy drivers on the road.) Exactly, I say. Our entire way of life, from the ground up, is designed to make Americans utterly dependent on their vehicles. And our society is largely unconscious of this.

Does drinking alcohol make you a bad person? No. Does driving a car make you evil? Of course not. Everyone is on their own path, has their own individual circumstances, and deserves to enjoy their life. Not drinking won’t automatically solve all your problems, and not driving won’t turn your community into Shangri-La anytime soon. But I suggest that there are very good reasons not to drink alcohol as well as not to drive a car before even taking into account alcoholism, drunk driving, peak oil, and climate change. I’ll also point out that while one set of choices is promoted, reinforced, and made as convenient as possible, the other set is shamed, challenged, or made as dangerous as possible. It would be nice if our society created a little more physical and psychological space for those who choose the path less taken. 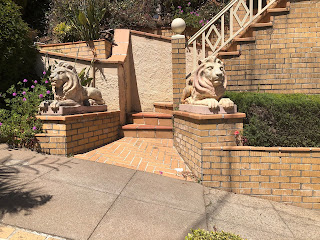