“Innovation” is ubiquitous as a way to describe beneficial societal change. Yet, the innovation language is deeply tied to a technology-centric and top-down ways of thinking that shackles the imagination and limits the pathways for change. Chris Maughan and Colin Anderson explore how proponents of agroecology – and other transformative visions of change – are better served by resisting the call of “the innovation imperative”, and to rather foreground the language of human rights, socially just creativity and people- and earth-centred processes of change. This article is a part of our column, Agroecology in Motion: Nourishing Transformation.

“What’s that you say? …stop using the word innovation…? …what are you talking about!?”

That’s the kind of reaction we expect to hear in response to our critical stance on the language of innovation. The term is everywhere – not only in agriculture, but in our research institutions, our responses to Covid, even our understanding of what makes for good parenting. In many ways innovation has come to describe all types of social and technological change. So how could we possibly hope to change that?

While innovation can almost mean anything to the point that it is meaningless, it is also used in very specific ways to further a narrow view of how to create societal change. As we explore in a recent publication, innovation is routinely deployed in a way that erases already existing practices, privileges the interests of large tech companies, and undermines more transformative people-centred visions of change.

Our sense of what social change is has somehow become inseparable from the commercial innovations of industrialists, tech developers, and corporate interests at the expense of the needs and agency of farmers (and other food producers) and their communities. According to Tim Wise, so many ways of thinking and acting have been disregarded because ‘the future is innovation and innovation is their proprietary technology’. Changing this way of thinking about change is vitally important in the pursuit of transformative societal changes.

Learning from Agroecology and Innovation in the United Nations

For a while now, we have been hearing misgivings about the ‘innovation’ language amongst our collaborators. We especially took notice of this dynamic in our participation in various processes at the FAO (Food and Agriculture Organization of the UN). FAO has been a key place where agroecology has gained attention and hard-fought legitimacy as a paradigm for social justice and sustainability in a transformed food system. Yet, it has been hotly contested and concerns were being raised that the ‘innovation’ language was one of the means through which agroecology was being contained and co-opted in both subtle and explicit/intentional ways.

We wanted to dive deeper into this to better visualize and understand this issue, to examine what the innovation language was ‘doing’ in the debates over agroecology. As part of our paper we systematically analyzed the public consultation organised around the publication of the High Level Panel of Experts (HLPE) of the Committee on World Food Security report on ‘Agroecological and other innovative approaches for sustainable agriculture and food systems that enhance food security and nutrition.’

The HLPE report was commissioned to gather evidence on agroecology’s potential to enhance food security and nutrition; however, under pressure from industrial interests, the scope of the report was widened to include ‘other innovations’ (e.g. Genetic Modification, Precision Agriculture). Agroecology would only be allowed to provide the focus of the report if it was presented as one of many innovations in the toolbox aimed at fixing the food system. Was this, we wondered, how agroecology was being undermined and coopted? – pushed from being about transformative paradigmatic change, into a minor technical fix at the margins of the dominant industrial, high-tech, corporate innovations?

The process behind the HLPE report seemed to be emblematic of how the term innovation was used to politically neutralise agroecology, and we wanted to investigate further. Why was the inclusion of ‘other innovations’ so important to those normally opposed to the transformational implications of agroecology? And what impact did it have on a report that many hoped would mark the belated entry of agroecology into the agricultural policy mainstream?

The consultation process for the HLPE report received a lot of attention – almost 150 written responses from a wide variety of differently positioned actors, from farmers’ groups, research organisations, industry groups, government departments, and NGOs. As such, it provided a unique opportunity to look at what happens when agroecology and innovation are put together.

We read, sifted and coded all responses, eventually sketching a framework intended to map the different ways in which innovation operates in the policy world and beyond – what follows is the results of this analysis. 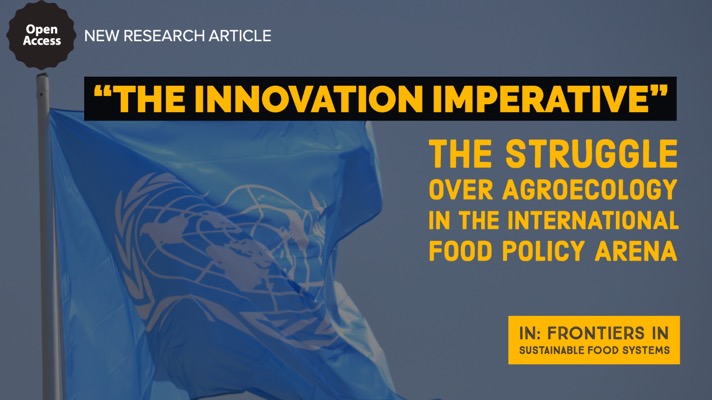 Although the ecological principles that underlie agroecology are critical, it is the emphasis on the collective knowledge, rights and agency of the ‘most affected’ that separates agroecology from production-oriented proposals for sustainable agriculture like climate smart agriculture, organics and sustainable intensification. Despite this, our study found that innovation language continually diminished the social agency of individuals and communities—or as the HLPE themselves define it, the ability to,

“define their desired food systems and nutritional outcomes, and to take action and make strategic life choices in securing these” (HLPE, 2019).

In our analysis we used the concept of ‘framing’ to make sense of what innovation does in relation to agroecology. One way to think about ‘framing’ is to think about a picture frame. The use of innovation to frame agroecology essentially involves a process of putting agroecology into a frame. Those doing the framing then draw on different aspects of the innovation language to make some things visible, while pushing other things out of the picture.

While our interest was in innovation as the main frame, we found that there were three ‘sub-frames’ (see figure 1 which gives more detail which can also be explored in the full article) that emphasized different aspects of innovation:

All three of these frames were fundamentally distinguished by their relationship to people’s agency. On the one end, innovation was being used to reinforce dominant conceptions of agency—overwhelmingly those exercised by individuals through markets—in ways that maintain the political status quo. On the other pole, proponents of agroecology put forward a counter-discourse for the collective rights and agency of peoples, especially the “most affected”, as the basis for an just and sustainable approach to innovation. 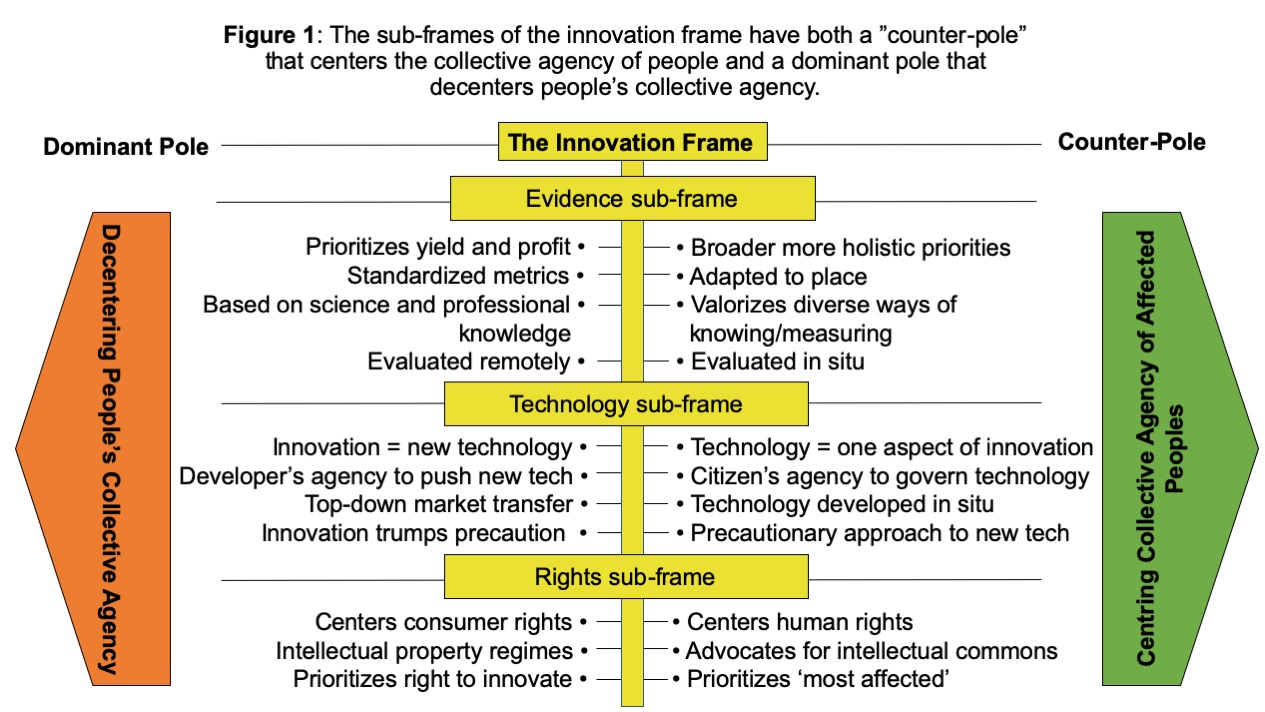 The role of the innovation frame in undermining collective agency, and thus the political aspects of agroecology, might not be that surprising given its origins and linked innovation systems in capitalist and neoliberal economics. The word innovation is used by many different actors for contrasting purposes, yet over almost a century of common usage, the term has become the friendly face of aggressive competition and freewheeling technological modernization. The innovation framing has consistently foregrounded the rights of  inventors, innovators, and intellectual property rights holders, while downplaying or masking the long term social and ecological deterioration that many novel technologies bring about which are largely borne by the most disadvantaged.

In contrast, agroecology challenges many of the assumptions that are bound up in the ‘innovation imperative’ including: the predominance of universal measures of success (like GDP or marketable yield), the notion that novel technology is the most important form of innovation, and perception of food producers as merely end-users or consumers. Centring the collective voice, agency and autonomy of food producers and their communities in decision-making on the governance of food systems is a radical shift that is by and large side-lined by the innovation imperative.

Innovation—often framed as novel technologies, transferred to users, to increase yield and profit—is an imperative only from the perspective of those fastened to the treadmill of expensive and privately-owned technologies. These findings are sadly familiar – similar dynamics have been observed throughout the history of technological development. Yet we feel this research is also timely, emerging during one of the most important years in agricultural policy in many years.

For example, the UN Food Systems Summit and the next UN Climate Change conference (COP 26) have already been criticised for failing to adequately integrate the needs of farmers and their communities. These two events occur at a crucial moment in history and appear to have been conceived as a way to open up markets for technology developers rather than as a way to enlarge the collective agency of small scale producers.

Whereas, agroecology represents a radical alternative to industrial agriculture, the innovation discourse largely undermines its potential. A more pressing imperative today is to adopt a language and practice that enables us to escape from the destructive tail-spin of agriculture. So, let’s move innovation to the background. Down with innovation! Instead let’s continue to build movements which foreground the collective rights and agency of food producers and citizens ahead of the profit motive. Long live rights, agency and social-environmental justice!

The full article can be viewed at: