People across the UK have been growing more vegetables this year. Seed producers have reported a large increase in sales since the appearance of Covid-19. This is not only a consequence of people having more time to invest in their gardens and allotments, but also, judging by the amount of stockpiling that took hold across many countries, a concern that they are going to have to provide for themselves as the crisis bites.

Food security has become a hot topic. But in the Shetland Islands, one of the most remote places to live in the UK, local people have been concerned about it for a while. Global pandemics aside, many Shetlanders are worried about the impacts of climate change on global food supply chains. They are at the end of the chain, as their food supplies are shipped in from the UK mainland more than 100 miles away – peppers from Spain have to travel an extra 12 hours to make it to the Shetland shops.

The Shetland economy relies heavily on its seafood exports and on global imports, which find their way to the shop and supermarket shelves. This is a symptom of the current global trade system, and adjustments would need to be made for Shetland to become more self-sufficient.

“If systems were in place, there could be enough local fish, dairy, meat and probably eggs in Shetland to feed the population,” explains Marian Armitage, chair of Shetland Food & Drink Association, which supports local food and drink producers. At some points in the year there is even a surplus of local milk. To avoid wastage, a local company has a new venture to make ice cream to support Shetland Farm Dairies.

Armitage assures me that many local people are committed to supporting the community shops rather than the supermarkets. The community shops have been working around the clock to ensure they can get provisions to people during lockdown, many arranging deliveries to those most in need. Shetland also has its own abattoir, which Armitage explains is rare these days, as many rural abattoirs have been closed down.

However, local vegetables and grains are difficult to source in Shetland. Crofters and farmers used to grow oats and beremeal, an ancient variety of barley, but these days you see more sheep and the occasional herd of photogenic ponies. This is all well and good when the shops can provide fresh fruit and vegetables, but what if the supply chain were to break? Already, fewer products are coming from Spain due to restrictions on shipping and workforce availability. 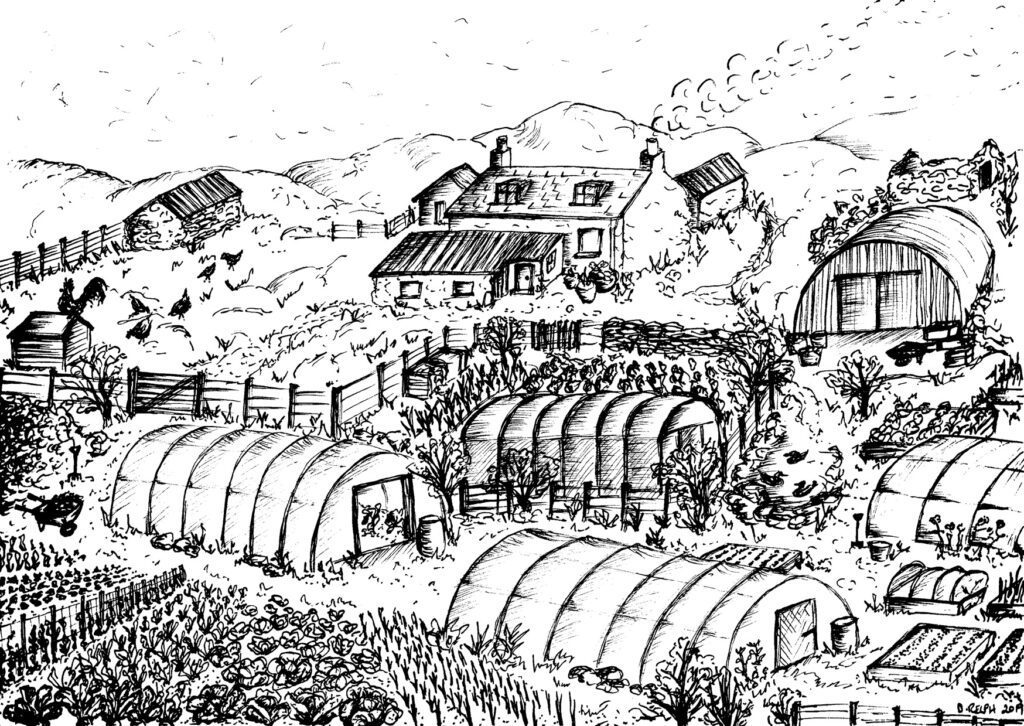 Alan Robertson and Penny Armstrong, the directors of Transition Turriefield, the most northerly community-supported agriculture project in the UK, know too well the challenges of growing crops in the far north. The short season with long daylight hours, coupled with a wet climate and strong winds, makes it very difficult to grow fruit and vegetables. The couple have been teaching Shetlanders how to grow crops in these challenging conditions, having experimented and learnt on their own land on the Shetland mainland. They tell me that in the past few years more and more people have attended their training sessions.

“We have seen a huge increase in folk wanting to grow stuff. They are a bit concerned about food supplies in the future. Nearly everyone in Shetland has a garden, so they have space to grow something,” says Robertson.

The invention of the Polycrub, a hardy Shetland version of a polytunnel made from recycled piping from salmon cages and semi-rigid polycarbonate sheeting, has helped to extend the growing season by around 100 days. The name is a play on planticrub, a term in Shetland dialect that describes the traditional stone shelters that crofters built in the past to protect cabbages. Polycrubs have popped up all over the islands, as people want to become more self-sufficient. 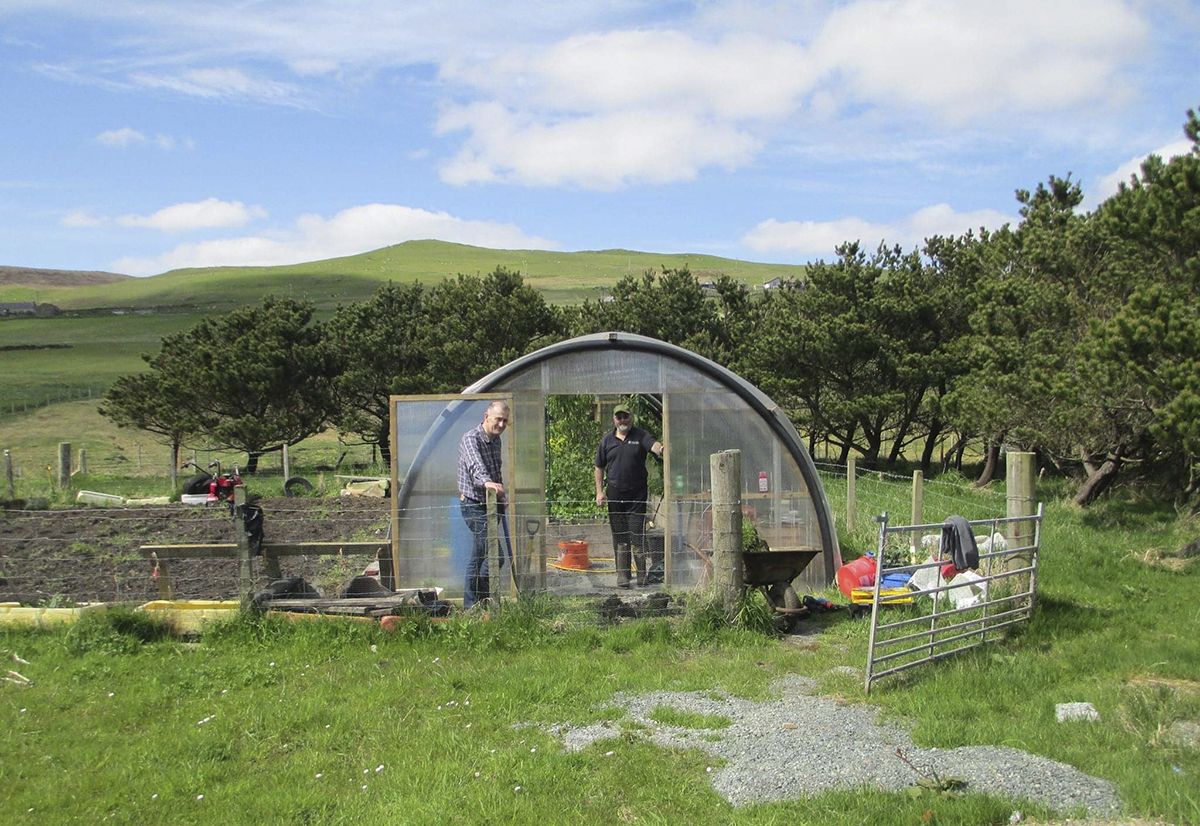 Armstrong tells me that before the pandemic hit, Part 9 of the Scottish Parliament’s Community Empowerment Act 2015 was about to be implemented by all local authorities in Scotland. This is a nationwide programme established to ensure that local authorities provide space and support for people to grow their own food. However, due to Covid-19 this is on hold, and there is little information for local people about what will happen to this council support in Shetland after the crisis.

Transition Turriefield relies on volunteer workers, and unfortunately the crisis has meant that volunteers are not allowed on-site. Where the couple were working long hours before, they must now work flat out in order to provide food for their local community. Their situation is not unique: many farms in the UK are struggling with their labour force. This is likely to have a knock-on effect globally, as although food supplies seem fairly stable at the moment, Covid-19 could mean that there will be a shortage of fresh produce and seeds next season. It’s not surprising, then, that people are turning back to the land. 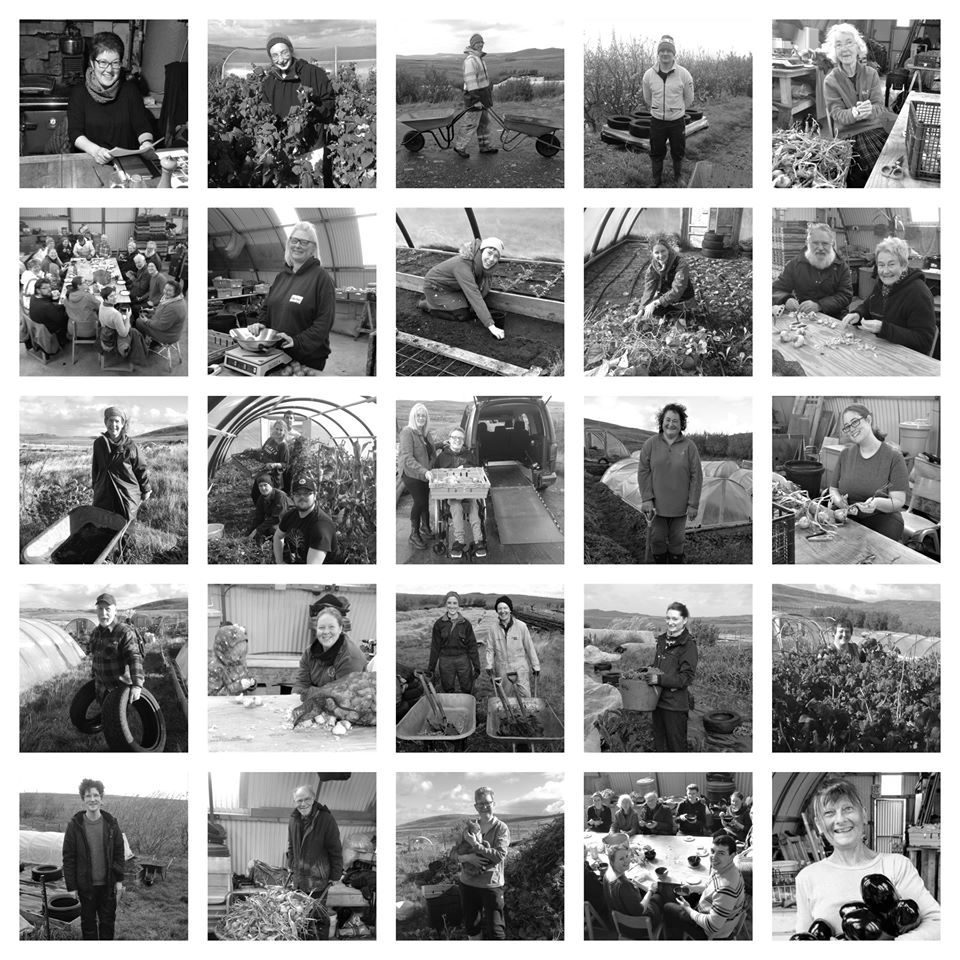 In Shetland, local shops are ready to help crofters sell their produce, using a flexible approach to take whatever they are provided with. Since the retail outlets are in place and there is plenty of land, Shetland has the potential to become more self-sufficient.

Shetland is a remote, beautiful and windswept place with a strong community spirit. However, despite its thriving local food scene, it is still inextricably tied up in the same fragile economic system, with similar challenges to the rest of the world. Who knows what impact the Covid-19 crisis will have on food supplies down the line, on top of the effects of a changing climate?

As the founders of Transition Turriefield say, it is better to work on food security now rather than wait until it is a problem.