As they photosynthesise and grow, tropical forests remove enormous amounts of carbon from the atmosphere, reducing global warming. However, forests are also themselves affected by this warming. If it gets too hot or too dry, trees will grow less and may start to die faster, decomposing and releasing that carbon back into the atmosphere.

This is why scientists like us are concerned that climate change will mean death outweighs growth, and tropical forests will eventually switch to releasing more carbon into the atmosphere than they take out. Our new research, published in the journal Science, shows that tropical forests can resist small increases in temperature – but only up to a point.

Such forests are found right across the tropics and although they’re generally hot and wet, this simplification hides a lot of variation in climate. Some forests at the southern edge of the Amazon reach 35˚C in the hottest months of the year, while others towards the foothills of the Andes reach no more than 26˚C. The jungles of the western Amazon and Borneo are wet all year round, while elsewhere in Amazonia and in Africa there are “rainforests” that have virtually no rainfall in the driest months. We used this variation to understand how climate affects the amount of carbon tropical forests store, and to predict how this might change in the future.

Why did we look at variation between locations to predict changes over time? Because, since individual trees live for a long time, even decades of monitoring cannot tell us exactly how a forest will respond to climate change in the long term. For example, Amazonian forests that are drying fastest are slowly shifting towards more drought-adapted tree species, but this is only evident if we look at the youngest trees. 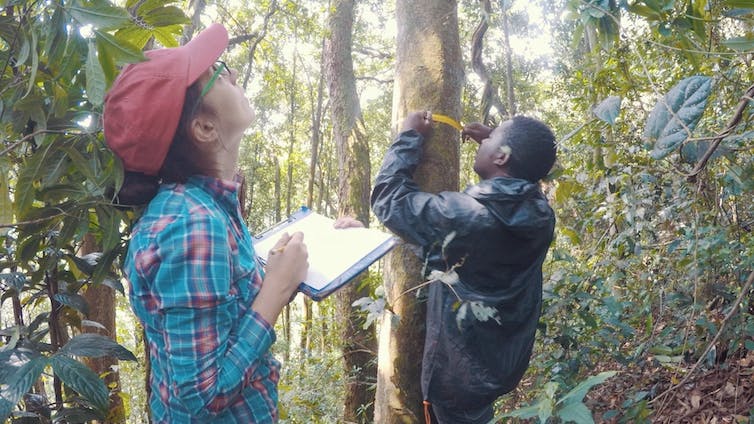 Looking at variations between different tropical forests gives us a unique perspective on how tropical forests might respond to future climatic conditions, as we can observe how forests grow in a particular climate after having had time to adapt. For example, we can use the difference in the amount of carbon stored by forests growing at 30˚C and 32˚C as a guide for how the former might respond over the long-term to a 2˚C increase in temperature.

So, we joined efforts with 223 other researchers. The international team measured more than half a million trees in 813 forests across the tropics. In each forest patch we recorded tree diameter, species and height. And a few years later we went back to measure how much each tree had grown, if some had died, or if new ones had established. Each tree had a numerical tag, which allowed us to track them over their lives. Overall we identified about 10,000 tree species and made two million measurements of diameter, across 24 tropical countries. 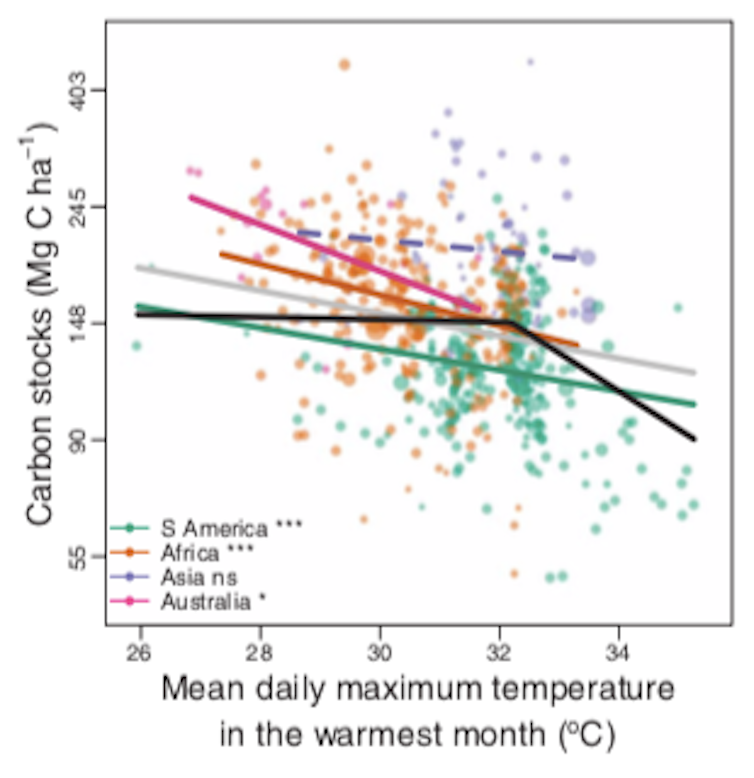 We found that tropical forests can tolerate small changes in temperatures, but only up to a point. Once annual mean daytime temperatures in the warmest part of the year hit 32˚C or more, these forests release four times as much carbon to the atmosphere per degree increase in temperature as they would below the threshold. This is mostly because hotter temperatures reduce tree growth, but it’s also down to heat combined with drought meaning trees are more likely to die and decompose, which releases carbon back into the atmosphere.

Adaptation is possible – if we act now

Our results indicate that we have an opportunity to ensure forests can adapt to climate change, but we need to act now. Firstly, we need to protect and connect the forests that remain, so that tree species are able to move as the climate warms.

But trees go from place to place very slowly: they can only “move” when animals or the wind carry their seeds somewhere else where climatic conditions are suitable. The more fragmented the forests, the less likely seeds can reach certain patches. Also, smaller patches are more affected by “edge effects” such as increased light, drier air and fire risks, creating challenging conditions for seeds to germinate and grow. Therefore, keeping forests connected is of crucial importance. 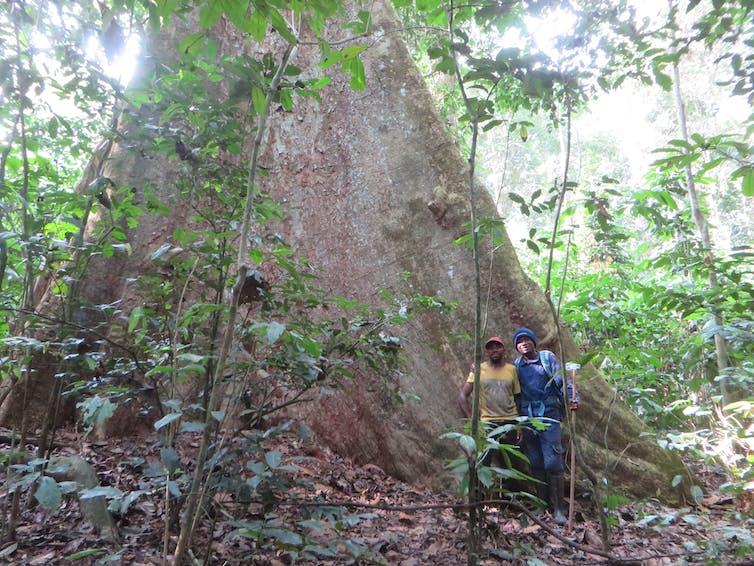 Secondly, we need to limit emissions. Even limiting global temperatures to 2°C above pre-industrial levels – already a best case scenario – will push nearly three-quarters of tropical forests above the 32°C heat threshold we identify. As each degree increase above the heat threshold releases 100 billion tonnes of CO₂ from tropical forests to the atmosphere, representing over 280 years of annual fossil fuel emissions by a country such as the UK, there is a clear incentive to avoid further warming.

Of course, reducing emissions is challenging. However, right now, humanity has a unique opportunity. During the current pandemic, emissions from transport, among other sectors, have been significantly reduced. So this shows that we humans can do it. We can design a healthier cooler future for all of us: rainforests and humans.