The coronavirus pandemic is, among other things, a tribute to human ingenuity and our relentless pursuit of globalization, an impulse thousands of years old. Previous civilizations, from the Romans to the Mongols, traded aggressively and invaded new ecosystems. They, too, connected far-flung geographies in innovative ways. None of it, however, ended particularly well.

By trading in all manner of peoples, plants, germs and animals, these empires diligently tested the limits of globalization and its growing complexity by seeding their own disintegration.

The corona pandemic, a pretty mild affair in the scheme of things, is telling us that we are now in the middle of a historic cycle where hyper-connectivity combined with hyper-complexity could rapidly lead to decline, if not collapse.

In fact, pandemics are not black swans, but predictable and natural events that often appear like clockwork in the evolution of human empires. They trigger other crises or partner up with them.

These mass reversals often appear after periods of intense population growth and changes in population density just as an imperial adventure unknowingly begins its descent.

In the process of pruning human numbers, pandemics invariably play a significant role in the disintegration of civilizations. They reveal wealth inequalities and technical fragilities. In this regard pandemics announce both the ending and beginning of things. They can have both negative and positive effects.

Peter Turchin, a Russian historian, has long argued that civilizations expand and contract in distinct waves or what he calls “secular cycles” that last about 300 years.

Here’s my rough sketch of his sharp thinking: In the initial wave, a troop of united elites marshal the masses to go forth and connect parts of the world with newfangled trade and political networks.

But as wealth and populations peak, the elites turn on each other as they seek to monopolize the spoils. (Turchin calls this a case of “elite overproduction.”) And then the cycle of expansionist thinking and radical growth comes to a crashing end with a roaring pandemic and other mayhem.

The Roman stoic Seneca observed that things do not perish as slowly as they come into being. Instead, “the way to ruin is rapid.” And pandemics prove the point.

But waves of disease aren’t the only horseman that take empires over Seneca’s cliff.

Cycles of global expansion also tend to be humbled by incompetent leaders, climate change (always a factor in decline), food shortages and forced migrations of people, which in turn add more fuel to pandemic fires.

According to Turchin, every growth cycle or pulsation comes in four distinct phases. A period of population growth, good eating and consensual elites is followed by stagflation, which begets some sort of economic or biological crisis that ends in a depression. And then the cycle renews itself.

Epidemics tend to erupt during the stagflation period for several reasons. That’s when populations peak and economic misery increases. It is also a period when long-distance trade connects everything; cities get too crowded and migrants clog the highways.

The Black Death, for example, found Europe in a dismal state of misery in the 14th century. The pathogen travelled down the Silk Road, a highway revived by the expanding Mongol empire, a flourishing global concern if there ever was one.

The Roman Empire offers another pandemic tale. At its height Augustus established the Principate in 27 BC. The Romans were such grand globalists that 400 African and Asian perennials can still be found sprouting on the grounds of the Colosseum.

As the Romans expanded into every nook and cranny of the Mediterranean and Africa, their wealth created new problems. Rome’s elites grew so large in number that their competition for power invited the kind of political polarization now eroding the United States. 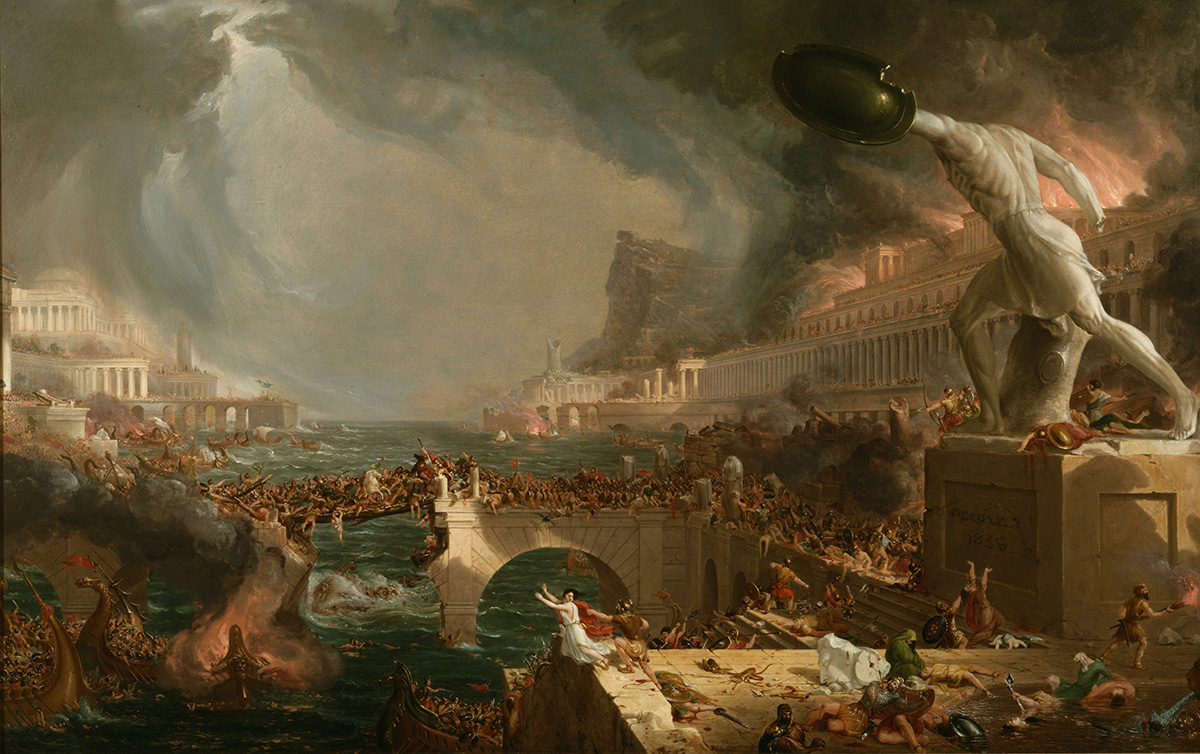 A plague exposed the fragility of the Roman Empire’s connectedness. Growing poverty and hoarding of wealth by elites was followed by decades of civil wars, and a population collapse. Destruction by Thomas Cole, circa 1836, is one of a series he painted on the rise and fall of the Roman Empire. Source: Wikimedia.

Three bad emperors were followed by five good ones. But the empire never completely recovered from the Antonine plague. Returning troops from the Near East probably dispersed the disease as effortlessly as modern day jet-setters.

This outbreak of measles or smallpox came in waves and killed a third to a quarter of the population. The disease rotted lungs, and victims spat blood.

The plague exposed the fragility of the empire’s connectedness. Growing poverty and the hoarding of wealth by elites was followed by decades of civil wars and a population collapse. A new cycle began with the late Roman Empire centred in Constantinople. But that cycle ended in part due to the impact of another epidemic, the plague of Justinian.

China’s Han Dynasty, which traded sorghum for camels in East Africa, followed a similar course as the Principate. Major epidemics accompanied its disintegration.

It can be easy in our fossil-fuelled civilization to imagine ourselves decoupled from such cycles, even history itself. We embrace the fruits of globalization while assuming we are protected by its risks because of our highly-evolved technologies.

In fact, technology can be the fuel to set pandemics alight. The Spanish flu of 1918 offers a cautionary example. It erupted during a period of unprecedented global movement of peoples. In Europe, troops from all parts of the world (and many ravaged by gas attacks) mingled with Chinese workers building trenches for warring empires. As soldiers fought and died in those trenches, the crowded Western front helped the flu virus become more virulent.

Steamships, a marvel of global connectivity, brought the pandemic everywhere in record time, killing more than 100 million people in a world occupied by 1.8 billion people.

It arrives at a point in the cycle where much of the industrialized world is experiencing declining economic fortunes. The second half of the 20th century delivered exponential human population growth, which now appears to have peaked at nearly eight billion.

In this period of fast globalization the virus emerged in China, the world’s new economic kingpin and energy consumer. The country pursues global trade dominance while its one-party state holds onto power by granting its citizenry the means for steadily increased consumption. Its cycle at the top of the globalized heap may be short.

One reason China has long been identified as a hot spot for emerging diseases such as avian flu and SARS is because of the intense pressures its population places on biological diversity. Now China has made itself a global crossroads, sending its products and emissaries everywhere on the planet to advance its economic interests.

When Europe colonized North America, its deadly pathogens killed nearly 90 per cent of the continent’s inhabitants. “Bringing previously isolated ecosystems together is much like flicking a cigarette lighter near open containers of gasoline,” wrote the great historian Alfred Crosby Jr. “Some of the time nothing will happen. Some of the time the fumes will ignite and blow your head off.” 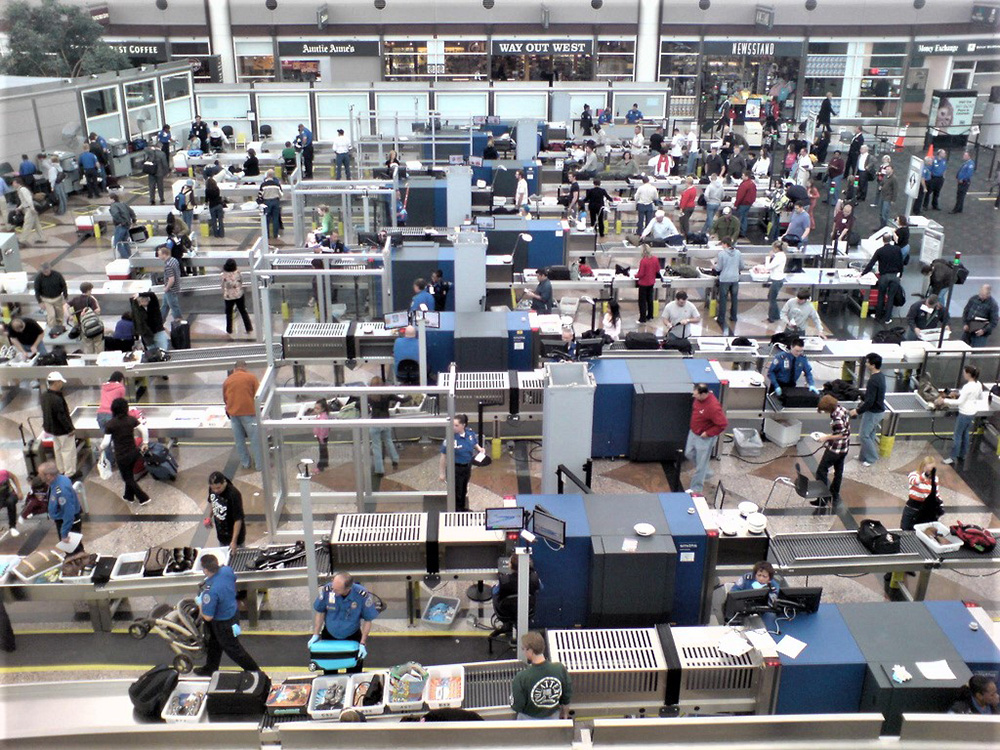 A busy day at Denver International Airport. Like COVID-19, the Spanish flu of 1918 erupted during a period of unprecedented global movement of peoples propelled by new technologies. Photo: Wikimedia.

Disease ecologists and other experts have repeatedly warned that unpredictable pathogens will explode from the new frontlines of globalization. As Dan Werb explained in the New York Times several months ago, the virus instantaneously exploited the rich pathways offered by global connectivity.

At the time of the SARS outbreak, China had about 233 international airline routes. But 16 years later it offered COVID-19 nearly 800 routes. During that same period the number of Chinese travellers jumped from three million to 53 million a year.

It is unlikely a computer could have designed a better network for rapid diffusion of a novel pathogen. Wuhan, where the pandemic began, is a major transportation hub for central China. Every year it facilitates the largest human migration on the planet as hundreds of millions of Chinese people celebrate Lunar New Year and crisscross the country in planes, trains and automobiles.

Nicholas Nassim Taleb, the former quant trader and now a professor of risk engineering, warned about the fragility of this global connectedness on Jan. 25.

With two colleagues he wrote a short note on systemic risks posed by what was then an emerging pathogen in Wuhan. Taleb, a math guy, described the contagious virus as “an extreme fat-tailed process owing to an increased connectivity, which increases the spreading in a non-linear way.”

In plain English, that means a new pathogen can have unexpected consequences that build exponentially. Therefore, to prevent ruin, argued Taleb and his colleagues, the general precautionary principle should prevail.

The note added that “Global connectivity is at an all-time high, with China one of the most globally connected societies.”

The only way to stop a virus moving through highly-connected societies is to quickly reduce or shut down global pathways. If governments don’t act quickly and agilely, the pandemic will overwhelm them.

The intensification of global connectivity has consequences for the survival of the species if a highly-fatal pathogen were to emerge, added the note. “With increasing transportation we are close to a transition to conditions in which extinction becomes certain both because of rapid spread and because of the selective dominance of increasingly worse pathogens.”

Because of the increased connectedness of the world, a pandemic can’t be assessed like any other risk. “While there is a very high probability for humanity surviving a single such event, over time, there is eventually zero probability of surviving repeated exposures to such events.”

The note concluded with an urge to disconnect, at least for a time. “It will cost something to reduce mobility in the short term, but to fail to do so will eventually cost everything — if not from this event, then one in the future. Outbreaks are inevitable, but an appropriately precautionary response can mitigate systemic risk to the globe at large.”

No government took the note seriously because very few elites understand what an unsafe and unpredictable world they have built for ordinary people.

But this much is now plain. The intensification of globalized networks creates more instability, insecurity and unpredictability. Even civilizations with computers can cultivate too much complexity, peak and decline.

Unpredictability can arrive in the form of tyrannical technologies, the cascading effects of climate change or in the form of a globe-trotting pathogens.

As a consequence, tomorrow will not look like yesterday. This modest pandemic, which will be followed by more pathogenic mischief, has reminded us that our society has entered a very dangerous phase in its historic cycle.

Can we build a simpler society that can survive random shocks? Can we re-localize the economy, tax the rich, support small farms, simplify our brutal technologies, power down and distribute authority more evenly among local communities?

Or do we return to “normalcy” by courting more catastrophe with accelerated globalization, sending ourselves galloping over the cliff?

This pandemic has given us a clear historic choice: change or collapse.