Blue carbon is increasingly being championed by organisations and governments as a tool for climate change mitigation and adaptation, as well as addressing multiple Sustainable Development Goals (SDGs).

What is blue carbon, how much potential does it actually have, and how could we use it?

The term “blue carbon” encompasses vegetated coastal ecosystems of seagrasses, tidal marshes and mangroves, which are highly efficient at carbon drawdown or biosequestration – capturing atmospheric carbon dioxide (CO2) using biological processes – and which store huge amounts of carbon in their plants and soils (Macreadie et al. 2017a). They may have a very large potential for further storing carbon, and are also are significant biodiversity hotspots.

Terrestrial ecosystems have attracted much attention for their capacity to mitigate climate change as a carbon store (or “sink”) for sequestering carbon from the atmosphere, but water-based ecosystems have received comparatively little attention until recently.

Globally, blue carbon ecosystems are smaller in extent than terrestrial ecosystems, but they have the potential to sequester ten times more carbon per area unit than land systems, and are twice as effective at storing carbon in soil and biomass (McLeod et al. 2011; Wylie et al. 2016). Blue carbon ecosystems, in the form of seagrasses, salt marshes and mangroves, cover 0.2% of the world’s ocean surface, yet contain 50% of total carbon buried in marine sediments (Duarte et al. 2013).

As with terrestrial ecosystems, degraded blue carbon ecosystems can shift from being a carbon sink to a carbon source, that is, changing from storing additional atmospheric carbon to  releasing carbon (Pendleton et al. 2012). Studies show that the continued degradation of seagrass ecosystems globally is comparable to annual rates of fossil fuel CO2 emissions in many small countries (Greiner et al. 2013). Maintaining the health of blue carbon stores is vital to climate change efforts, as continued ecosystem degradation will detract significantly from mitigation strategies and contribute to further warming. Instead of being an emissions source, these ecosystems have the potential to store vast amounts of carbon.  Ecosystem restoration can draw down increased amounts of carbon from the atmosphere.

The amount of carbon stored in blue carbon ecosystems’ plants and soils is now estimated to be significantly larger than previously thought, highlighting their importance in the carbon cycle and the need for policies to protect them, and to prevent degradation (Pendleton et al. 2012). By restoring degraded seagrass ecosystems, the carbon sequestration capacity of these ecosystems can increase by up to four times (Greiner et al. 2013). 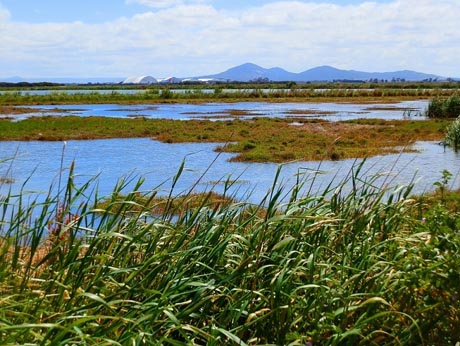 Climate change projections show an expected increase in extreme weather events, which will increase pressures on coastal areas and ecosystems (Steffen et al. 2018). Natural infrastructure in the form of healthy ecosystems can be vital for increasing the security of coastal communities, by acting as a physical barrier to reduce risks associated with some extreme weather events such as storm surges. Wave heights associated with Hurricane Wilma in 2005 on the USA’s east coast were reduced by 72- 86% in an area of 7-8 kilometres of mangrove habitat (Sutton-Grier et al. 2015).

In addition to reducing the risk of coastal flooding, erosion and storm surge and the associated damage costs, blue carbon ecosystems can provide other social and economic benefits, including increased opportunities for tourism, recreation, education and research (Sutton-Grier et al. 2015).

An extreme marine heatwave event in Western Australia in summer 2010/11 resulted in the loss of 22% of seagrasses in a 4,300 square kilometre area, with an estimated two-to-nine billion tonnes of CO2in the following three years (Arias-Ortiz et al. 2018).

Above-average temperatures and reduced moisture levels also contributed to dieback of mangroves in the Gulf of Carpenteria in Queensland and the Northern Territory in the summer of 2015/16, with approximately 6% of mangroves lost in the region (Duke et al. 2018).

More than 13,000 square kilometres of tidal marshes have also been lost since European settlement due to agricultural, urban and industrial development, building of levees and extreme weather events (Macreadie et al. 2017b). Although many tidal marsh areas are now classified as endangered and receive better protection, regenerating large areas of these degraded ecosystems could restore their carbon storage capacity (Macreadie et al. 2017b).

Where to now for blue carbon?

Since the founding of the IPBC in 2015, some progress has been made in Australia on research and reporting on blue carbon. Seagrasses were included in Australia’s greenhouse gases National Inventory Report 2016 to the UNFCCC (International Partnership for Blue Carbon n.d), and the IPBC has partnered with Deakin University’s Blue Carbon Lab for research into blue carbon ecosystems distribution, feasibility assessments for carbon offset initiatives, identifying threats to ecosystems and management techniques (Blue Carbon Lab n.d.).

To date, national policies have not been implemented for blue carbon ecosystems specifically for climate change mitigation and adaptation purposes. The IPBC identifies “testing and developing optimal management approaches” as a key objective, with potential for local management on behalf of funding partners such as NGOs, researchers, government and the private sector (International Partnership for Blue Carbon n.d, p. 11). Major challenges lie in forming a cohesive set of policies for a range of blue carbon management policies, and securing adequate and accessible funding for blue carbon projects (Herr et al. 2016; Macreadie 2017).

Australia must now take the next step in protecting and restoring blue carbon ecosystems beyond the research phase. It is well placed to do so, with a breadth of international studies and literature to support new projects and policies.

Sutton-Grier, A, Wowk, K, & Bamford, H 2015, ‘Future of our coasts: The potential for natural and hybrid infrastructure to enhance the resilience of our coastal communities, economies and ecosystems’, Environmental Science & Policy, vol. 51, pp. 137–148.