The more I study the story of the Roman Empire, the more I see the similarities with our world. Of course, history doesn’t always repeat itself, but it is impressive to note how with the start of the collapse of the Western Empire, the Roman elites abandoned the people to build themselves strongholds in safe places. Something similar may be starting to occur in our times and our elites may decide to seek for safe havens while leaving us to drown, starve, or burn.

Rutilius Namatianus is known today for his “De Reditu Suo” (of his return). It is a long poem where he tells us of his travel along the Italian coast around 416 AD, during the last decades of the Western Roman Empire. We read in it a chilling report of the ongoing collapse: abandoned cities, wastelands, ruined roads, and more.

But who was Rutilius Namatianus, and what was he doing? A patrician, a powerful man, a rich man, and also a liar and a traitor. He was running away from Rome, probably taking with him gold, slaves, and troops with the idea of building himself a feud in Southern France, where he had some possessions. In doing so, he was abandoning the people of Rome to fend off for themselves. The people whom it was his duty to defend as praefectus urbi, the prefect of Rome, the delegate of the Emperor himself.

Namatianus was doing nothing worse than other rich and powerful Romans were. Emperor Honorius himself had run away from Rome, settling in Ravenna, protected by the marshes surrounding the city and with ships ready to take him to safety in Byzantium if things were to get really bad. When Rome was besieged and taken by the Visigoths, in 410 AD, Honorius did nothing, preferring to get busy with his chicken (a legend, but with elements of truth).

If you read the chronicles of the early 5th century AD, you get the impression of total mayhem, with barbarian armies crisscrossing Europe and few, if any, Roman nobles and commanders trying to defend the Empire. Most of them seemed to be maneuvering to find a safe place where they could find safety for themselves. We don’t know what was the final destiny of Rutilius Namatianus but, since he had the time to finish his poem, we may imagine that he could build himself a castle in Southern France and his descendants may have become feudal lords. But not everyone made it. For instance, Paulinus of Pella, another rich Roman, contemporary of Namatianus, desperately tried to hold on his possessions in Europe, eventually considering himself happy just for having been able of surviving to old age.

We see a pattern here: when the rich Romans saw that things were going really out of control, they scrambled to save themselves while, at the same time, denying that things were so bad as they looked. We can see that clearly in Namatianus’ poem: he never ever hints that Rome was doomed. At most, he says, it was a temporary setback and soon Rome will be great again.

Of course, history doesn’t have to repeat itself, even though we know that it often rhymes. But the similarities of the last decades of the Western Roman Empire with our times are starting to be worrisome. Most of our elites aren’t yet running away, but some of them seem to be thinking about that (see this article by Kurt Cobb). And some are starting to build sophisticated luxury bunkers where to take refuge.

What’s most impressive is the change in attitude: as long as problems such as climate change were seen as needing just cosmetic changes, they were discussed and governments pledged to do something to solve them. Now that the problems start to be seen as impossible to deal with, they are ignored. The change is especially impressive for those regions where the climate threat is closer in time. The elites of the Maldives and the Kiribati islands (*) have reacted by denying the danger, while at the same time selling off what they have and getting ready to leave for higher grounds.

We have to be careful here: there is no conspiracy today (just as there wasn’t in Roman times) of people getting together in a secret room to decide the fate of humankind. There is, rather, a convergence of interests. People who are sufficiently wealthy to buy themselves a survival bunker may decide to do so and, at that point, it is in their best interest to downplay the threats.

It is a very different attitude from that of middle-class people. We (I assume that most readers of this blog are middle-class people) don’t have the kind of financial clout needed to plan for a future as feudal lords among the ruins of a collapsed civilization. That’s why some of us keep catastrophistic blogs, “Cassandra’s Legacy“, for instance. Blogs can hardly save us from collapse but, at least, they are efficient means of communication and maybe that’s what we need to plan for the future.

So, returning to Roman history, what happened to the Romans who couldn’t run away and reach their castles? We know that not all of them survived, but some did. While the institutions and the state crumbled down, resilient communities started to appear, often in the form of monasteries or secular communities created around “overseers” (bishops).

Can we think of something like that for our future? Yes, it is an idea that’s developing in several forms, transition towns, for instance. So far, it is just an embryonic idea, but it may grow into something important together with new ideas on how humans can relate to the ecosystem. The Romans, after all, developed a new religion to help them deal with the collapse of their society. And, as I said, history never exactly repeats itself, but it rhymes.

Some more details about the experience of ancient Rome with collapse. First of all, what was the origin of the 5th-century collapse? We have to go back to “peak empire” when the Romans reached the limits to their expansion. It was in 9 AD when three Roman legions were massacred by the Germans in the woods of Teutoburg. Their commander, Publius Quinctilius Varus, committed suicide.

How could it be that the Romans, no fools in military matters, sent three of their legions blithely marching into a thick forest where a large number of German warriors were waiting to cut them to pieces? The only possible explanation is that Varus was betrayed: someone wanted to see his head rolling, and they did. It is remarkable how fast and effectively Octavianus, emperor at that time, exploited the defeat for his personal political gain. He spread the rumor that he was so saddened by the news that he would walk in his palace at night, muttering, perhaps hoping to be heard by the Gods, “Varus, Varus, give me back my legions!” If there ever was a viral meme, this was one, still with us more than 2,000 years afterward!

Maybe Octavianus had Varus stabbed in the back, or maybe he just exploited Varus’ incompetency as military commander. In any case, the Teutoburg disaster had the same effect as our 9/11 attacks on Roman society. It scared the Romans deeply. That sealed the role of Emperors as protectors of the people. Eventually, politics is mostly a racket: people pay to be “protected.” Against whom? Typically, if there is no ready-to-use enemy, one needs to be fabricated on purpose. For the ancient Romans, the Barbarian menace (we would call them today, ‘immigrants’) was much exaggerated. The problems of the Empire were mostly internal and would have required deep reforms. Instead, the Emperors – and the Romans themselves – refused to admit that and they concentrated on military measures only. It was good business to keep troops and build defensive walls. Again, the similarities with our times are evident.

Things moved slowly in Roman times, so the strategy of concentrating all efforts on the military system seemed to pay, at least for a couple of centuries. If you read the memories of Emperor Marcus Aurelius, you get the impression of a person who genuinely believed that his duty was to defend the Empire. He couldn’t understand that the excessive military expenses were ruining the Empire; most empires in history have destroyed themselves exactly in this way. Similarities with our times? Oh. . .

Things started going bad after Marcus Aurelius and the Empire all but collapsed during the 3rd century AD. It managed to get together again in a form that reminded more of a zombie than of the glorious empire of the early times. But the puls (**) really hit the fan with the end of the 4th century, when the Roman Elites started running for their lives. Many of them succeeded, while the poor were left in the puls – or not even that. Between 400 and 800 AD, the population of Rome fell by over 90%, mainly because of famine and the associated plagues.

(*) The fact that coral islands are “alive” gives them a certain capability of coping with the sea level rise caused by global warming. But there are limits to how fast the coral can grow and to the level the islands can cope with.

(**) If you are curious about what may be hitting the fan, you can see here a bowl of puls, a typical Roman food. It was a soup made with farro grains. 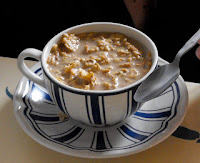