Learning primitive skills offers an opportunity for people to reconnect to the environment and to gain a deeper understanding of sustainable living. The U.S.-based MAPS Meet provides a forum to learn these skills.

The Mid-Atlantic Primitive Skills (MAPS) Meet 2017 started with a grand demonstration. Literally. Fire-making, one of the four life-saving skills (along with shelter building, water finding, and food provisioning), is typically the first skill novices are encouraged to learn. Students are taught to make a hand-sized fireboard, spindle, and bow, and to patiently, almost lovingly, draw a coal out of the wood through friction alone. But during this year’s MAPS meet, Bill Kaczor, the director of Ancestral Knowledge and the MAPS meet, along with his troop of trainers, brought this teaching to epic proportions, presenting a fire-making kit the size of a person and requiring the cooperation of half a dozen people to make it work. The symbolism was clear: these skills are big, they’re important, and they take a village to make work.

During a long holiday weekend in May, more than 200 people gathered from around the U.S. mid-Atlantic region to learn and practice their “primitive” (or traditional or Indigenous) skills—from skinning a rabbit, to identifying useful, edible, and dangerous plants, to making simple debris hut survival shelters. (Helpful hint: if you’re ever stranded in the wilderness, get your shelter squared away first—not fire, not food, not even water, because if you freeze to death at night, you won’t have a chance to die from thirst or hunger.)

Over the course of just four days, 25 teachers taught more than 80 classes. Some participants dived deep into learning how to “knap” (shape) stone to make tools or how to convert a hide into clothing; others learned how to make rope and pigments; while others converted bamboo, bark, branches, clay, gourds, and rawhide into containers of all shapes and sizes (without plastic, it seems making containers is a substantial job).

Returning to the Wilderness

The path that Bill Kaczor took to be a primitive skills expert and advocate wasn’t a particularly straight one. He started his career touring as part of the road crew with the Grateful Dead and eventually found himself owning a couple of skateboard shops in the Washington, D.C. area. But in 1989, a friend handed him a book by Tom Brown, Jr., the renowned primitive skills expert. It took Kaczor five years and another friend to recommend that he take Brown’s course to explore the topic further, which he did in 1994. 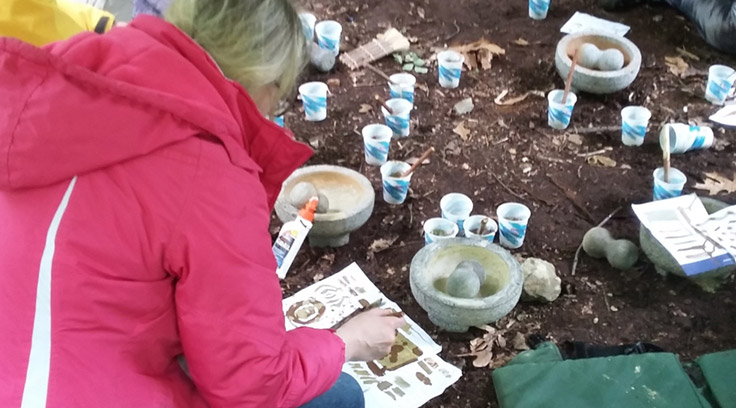 Not long after that, Kaczor was regularly practicing his primitive skills on the front porch of his skate shop in College Park. Weaving baskets, making fire, tanning hides—naturally he got strange reactions from his customers. He then became an instructor at Brown’s Tracker School. He then sold his shops and, in 2002, he, his wife, and a few others founded the organization Ancestral Knowledge “to teach ancient and modern technologies, activities, and philosophies that support a sustainable lifestyle.” At around the same time, the MAPS group created the MAPS Meet, which after a few years became a project of Ancestral Knowledge. In reality, Kaczor—who at the Meet is dressed in a deer-hide jacket that he hunted, tanned, and sewed himself—notes, “I grew up fantasizing about being able to do this stuff.” As a boy, Kaczor loved playing in the forests and farmland that surrounded his home. “When I went to Tracker School, I realized this is what I wanted to do since being a kid.”

What draws a couple hundred people from Washington, D.C.—one of the busiest, most career-focused metropolitan regions in the United States—into the woods to learn these seemingly outmoded and not-so-relevant skills? Who gives up their holiday weekend to come to MAPS? “There aren’t many preppers here,” says Kaczor, “not many granola hippies either.” He suggests that the audience is more “awakened people who understand that this stuff is good to know, who understand that farming practices are out of balance, that financial practices are out of balance. Sustainability is on people’s minds.”

Of course, being so near to D.C., there are “more city-conformist type folk trying to break free of that mentality—people walking that razor-edge between these two worlds,” explains Kaczor. But MAPS offers a “cleansing of our souls,” a chance to unplug from the stress and unsustainability of modern living. The Value of Primitive Skills As Kaczor points out, “sustainability and stewardship” are a central part of Ancestral Knowledge’s mission. As is getting students—and particularly children—to connect with nature. Many attendees of the MAPS Meet have children, and bring them each year to get them playing freely in the woods. And free they are. While there are morning classes for the children, much of the time they just run wild—a rare opportunity in the modern world of too many school and sports commitments, organized playdates, urban traffic, and fear of strangers. Not to mention, a disconnection of many parents to nature. “One parent in DC came to me, and said, we’re so glad you do this because we’ll never go outside.” As Kaczor explains, we have a chance to correct this with kids.

Not only is there a robust kids program at MAPS, but Ancestral Knowledge has developed a series of summer camps and homeschool groups. As Kaczor describes, the organization is teaching children skills, knowledge, and a desire to explore. But more than that, “we’re mentoring kids in teamwork, communications, and leadership. We’re teaching children to be teachers without them knowing we’re teaching them to be teachers.” This type of experiential learning or “Coyote Teaching,” explains Bill, is “the opposite of helicopter parenting.”

Many courses are offered to adults, too—for those who do venture outside. These include short classes like those at MAPS as well as intensive long courses, such as “The Spirit of the Hunt,” where students learn to make a bow and arrows and to stalk, hunt, dress a kill, and tan a hide over the course of several months. “This is our birthright,” says Bill. “This is the knowledge we need to know. Once it is gone, we are aliens from our instincts, and, once alienated, we are done as a species.”

Fortunately, programs like Ancestral Knowledge and the MAPS Meet are preserving, curating, and developing these ancient skills and will hold them in trust for an era when we may, once again, rely heavily on them.