Doughnut Economics, by Kate Raworth (Chelsea Green, 2017) is an interesting book that goes in the right direction in the sense that it promotes a circular economy, but it leaves you with the impression that it missed that extra step that would have lead it to define the goal in the right way. Bridging the gap between standard economics and biophysical economics is still far away.

So, what is this “Doughnut” that gives the title to the book? Initially, I had imagined that it was supposed to be a sort of mandala representing the concept of circular economy. But that doesn’t seem to be the case: circular mandalas often represent the cyclical movement of a wheel, but the doughnut doesn’t (as, indeed, most doughnuts are not supposed to be used as wheels). Here is how it is represented in the book: 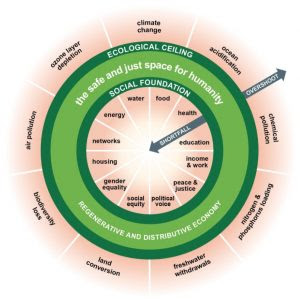 It is described as “a radically new compass for guiding humanity this century.” Ambitious, to say the least, but how is that supposed to work, exactly? Maybe I am missing something, but I not sure I can understand why the numerous concepts appearing in the figure should be arranged in a “doughnut.”

The problem with the doughnut is not so much understanding why it is shaped like a doughnut, but what it lacks. Look at the outer ring; you will see 10 sectors, all related to pollution: climate change, ocean acidification, chemical pollution, etc. Something is conspicuously missing and it is not a minor element of the overall picture. It is natural resources and, in particular, non-renewable resources (*)

Natural resources, their depletion, and the related concept of “overshoot” are not just missing from the doughnut, they go mostly unmentioned and unnoticed in the whole book. To give you an example, Raworth mentions only once the 1972 study “The Limits to Growth” that was the first to pinpoint the resource problem. In a discussion of less than than two pages, I think her position can be summarized by the following statements:

Mainstream economists were quick to deride the model’s design on the basis that it underplayed the balancing feedback of the price mechanism in markets. If non renewable resources became scarce, they argued, prices would rise, triggering greater efficiency in their use, the wider use of substitutes, and exploration for new sources. But in dismissing World 3 and its implied limits to growth , they too quickly dismissed the role and the effect of what the 1970s model simply called pollution … World 3’s modeling of pollution turned out to be prescient…. recent data … find that the global economy seems to be closely tracking its business-as-usual scenario.

As it is often the case in this book, Raworth’s statements need some work to be interpreted because they are always nuanced; if not vague, as when she says one should be “agnostic” about economic growth (**). Here, the interpretation seems to be that The Limits to Growth may have been right, but only because it took into account pollution. Instead, its treatment of non-renewable natural resources was wrong because depletion can be completely neutralized by market factors. Raworth doesn’t seem to realize that she is contradicting herself, here: if the “business as usual” scenario produced good results in terms of comparison with the real world’s economy, it is because it contained depletion as a major constraint. World 3 could also be run in the hypothesis of infinite natural resources, with pollution the only constraint, but the results would not be the same.

That’s the thread of the whole book: natural resources are not a problem; we should be worried only about pollution. Raworth doesn’t link the concept of the circular economy to recovering non-renewable resources; she proposes only in relation to abating pollution, with the corollary that it also brings about also better social equality. This is not wrong; it is true that a cyclical “regenerative” economy would be able, in principle, to reduce or eliminate pollution. Still, it is curious how the question of mineral resources is so conspicuously missing in the book.

Kate Raworth is described in the book flap as a “renegade economist”, but she still reasons like an economist. The idea that the price mechanism will make depletion always irrelevant is old and it goes back to the 1930s, when the so-called “functional model” was presented, stating exactly what Raworth describes. The idea is that market factors will always re-adjust the system and magically make depletion disappear. By now, the functional model is deeply entrenched in the standard economic thought and there seems to be no way to dislodge it from its preheminent position.

The interesting point is that not only economists tend to dismiss depletion as irrelevant. In recent times, the whole “environmental movement” or the “Greens” have taken exactly the same position. All the debate about climate change is normally based on the supposition that minerals, and in particular fossil fuels, will remain cheap and abundant for the current century. If this is the case, it makes sense to propose to spend untold amounts of money for carbon capture and sequestration (CCS) rather than for renewable energy. It goes without saying that, if this assumption turned out to be wrong, the whole exercise of CCS, if it were undertaken at the necessary scale, would turn out to be the greatest resource misplacement of resources in human history, possibly even worse than nuclear energy.

Why is that? As a puzzle, it is difficult to solve. In principle, resource depletion and its negative effects would seem to be easy to understand. Easier than the complex chain of physical factors that leads from the emission of greenhouse gases to disastrous events such as sea level rise, heat waves, hurricanes, and the like. Maybe it is just a question of the lifetime of memes. The meme of depletion started before that of climate change and it is now in its downward trend. Whatever the case, we seem to be locked in a view of the world that misses some fundamental elements of the situation. Where this special form of blindness will lead us is all to be seen.

Getting back to Raworth’s book, despite the criticism above I can also say that it is worth reading for its broad approach and the wealth of concepts it contains. Its discussion on how the science of economics came to be what it is nowadays is, alone, worth the price of the book. Although it misses part of the problem, it may open up new views for you.

(*) You may also have noticed that the concept of “overpopulation” is missing in the doughnut. On this point, Raworth maintains in the text that if people are given the possibility of having a life free of deprivation, they won’t reproduce like rabbits – a concept on which I tend to be in agreement; even though its practical implementation in the current world’s situation is problematic, to say the least.

(**) The idea of a “zero growth” or “steady state” society would seem to be a fundamental feature of a circular economy, but it is barely mentioned in the book