Fifty years ago the editors of The Ecologist published a book that condensed their thinking on ecological problems, and the necessary solutions to them. Five decades on and the book’s prognosis has not only been borne out by experience, but many of the changes it proposed are supported by the latest academic research.

Unfortunately the book, and its content, has largely been ignored. Its prognosis, and solutions, are still so radical that many in the green movement will not make such arguments. In fact, since the movement compromised its values under the banner of ‘green’ at the beginning of the 1990s, such radical discourse has been expunged from mainstream ecological debate.

This dialogue is framed from the very first paragraph:

“The principal defect of the industrial way of life with its ethos of expansion is that it is not sustainable. Its termination within the lifetime of someone born today is inevitable – unless it continues to be sustained for a while longer by an entrenched minority at the cost of imposing greater suffering on the rest of mankind.”

That perspective – framed within arguments for ecological justice – is the present-day conclusion of recent academic research. A similarly critical view of affluence has also been the subject of much academic research over the last decade or so.

What this book forces us to ask is that, if ‘contemporary issues’ were accurately described and diagnosed fifty years ago, why has no progress been made since then?

The realistic answer to that is that the green movement itself, due to its own class and affluence bias, is unable to address the seriousness of the issues of growth and material consumption. Their message focusses on techno-fixes, and seeking reform rather than change.

As the book states:

“The developed nations consume such a disproportionate amount of protein, raw materials and fuels that unless they considerably reduce their consumption there is no hope of the undeveloped nations markedly improving their standard of living. This vast differential is a cause of much and growing discontent, made worse by our attempts at cultural uniformity on behalf of an expanding market economy. In the end we are altering people’s aspirations without providing the means for them to be satisfied.” 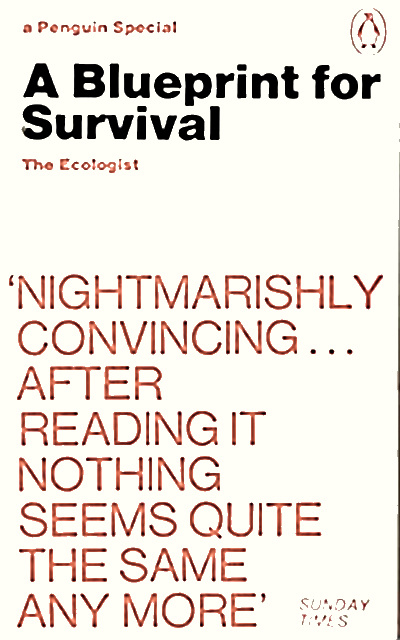 From minimalism to ecopsychology, affluence and consumption are the subject of much recent, seemingly ‘novel’ discussion. But again, this book was outlining the pointlessness of consumption, and of distancing ourselves from nature with technological distractions, decades ago.

The cutting edge of ecological research today studies the complex interactions which support and stabilise ecosystems – from woodlands to the entire global climate system. Recent research outlines our lack of knowledge of these complex ecological interactions, such as climate ‘tipping points’. But this book highlighted the importance of ecological complexity long before:

Industrial man is reducing complexity in other ways. For instance, economic pressures for farmers to reduce the different strains of crops under cultivation. Only those that present short-term economic advantages tend to survive. This process has been accentuated with the so called ‘green revolution’.”

That last point, on the green revolution, is critical to biodiversity. Pouring resources into mechanised farming has, temporarily, averted the global famines feared in the 1960s. In reality, though, all that process has done is create a global biodiversity crisis, which today is affecting farm production through localised droughts, desertification, chemical-resistant pests and diseases, and soil erosion.

Fundamentally, though, the book frames its broad ecological arguments in terms of a crisis of economic ideology:

“We must come to assess our standard of living not by calculating the value of all the air conditioners we have made and sold, but by the freshness of the air; not by the value of the antibiotics, hormones, feedstuff and broiler-houses, and the cost of disposing their wastes… but by the flavour and nutritional quality of the chickens themselves; and so on. In other words, accepted value must reflect real value, just as accepted cost must accept real cost.”

The ‘heterodox economics’ movement which sprang-up in the wake of the 2008 economic crash is foreshadowed in this book. The more long-standing discipline of ecological economics is identified as the solution to many of the problems the book discusses.

The greatest challenge the book proposes is to recognise that today’s dominant ‘Western ideology’ is not fit for our continued survival. Consequently we need a new philosophy that addresses the impacts of human expansion with radical new responses.

As the book says:

“We are sufficiently aware of ‘political reality’ to appreciate that many of the proposals we will make in the next chapter will be considered impractical. However, we believe that if a strategy for survival is to have any chance of success, the solutions must be formulated in the light of the problems and not from a timorous and superficial understanding of what may or may not be immediately feasible.”

The fact this book identifies various ecological problems, alongside solutions that are still relevant today, is a condemnation – not support – for the contemporary environment movement. The movement abandoned the radical approach of this similar works in order to try and win political favour in the 1990s. Clearly, that approach has failed. 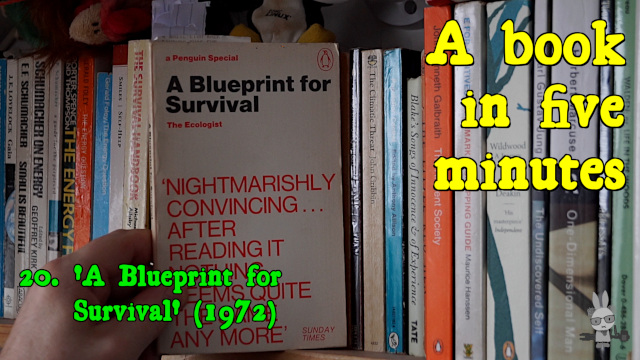 Fifty years after its publication, this book represents not only an affirmation of our effects on the environment, but also our failure to engage with that reality – and the changes necessary to avert that inevitable outcome. The solutions are known: The difficulty is not in the prognosis, but in our failure to act with sufficiently radical foresight.