Cuba is going through a serious economic crisis, aggravated by the pandemic (discussed here). Here’s the deal: the shelves of food shops are empty.

As soon as we arrived at the Hemingway Marina, a guard greeted us with a cigar in hand. With our feet on the ground, we rush to discover the intriguing capital of Cuba, the so-called largest city in the Caribbean! Relieved, nothing has changed since Buena Vista Social Club: the old cars are still running, Cuban music is playing on every street corner and rum fills the shelves. 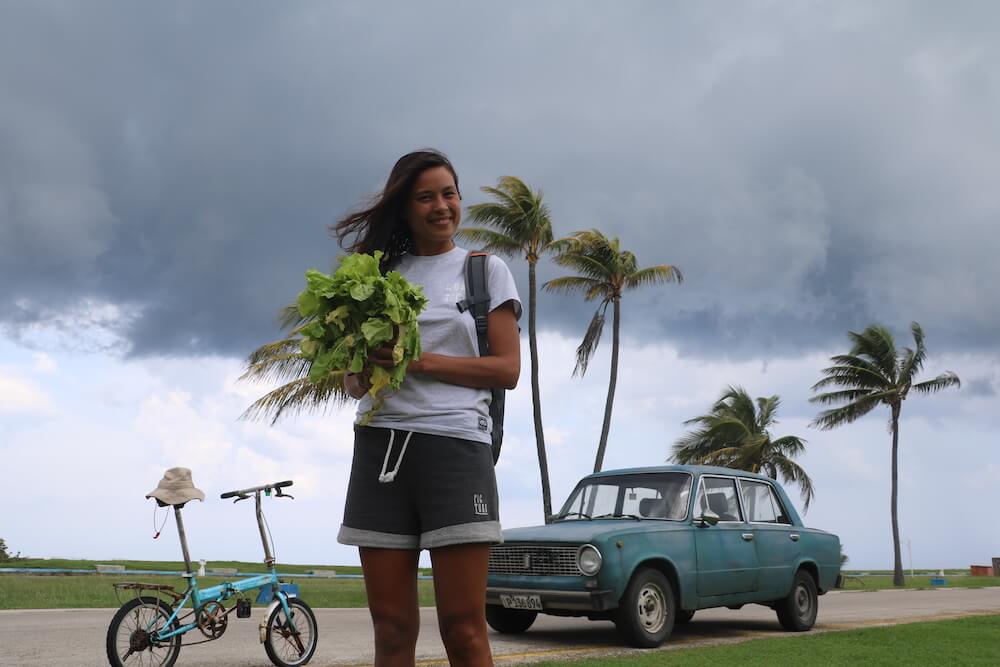 Permaculture spaces in the middle of the buildings

On our way, we surprisingly discover permaculture spaces in the middle of the buildings! Organopónicos are places where fruit and vegetables are produced in the city without pesticides or chemical fertilisers. It is a technique of urban agriculture originating from the island: it consists of growing vegetables in low concrete walls filled with organic matter and living soil, with micro-irrigation lines laid on the surface of the plants grown.

The Cuban Organoponicos have developed gradually since the fall of the Berlin Wall and the Soviet Union. Cuba lost its main buyer of sugarcane and its main supplier of oil for the production of chemical fertilisers and pesticides. A serious economic crisis ensued and, due to a lack of food, the population spontaneously started urban agriculture. This movement was able to grow thanks to a state policy of land distribution and cooperativism. 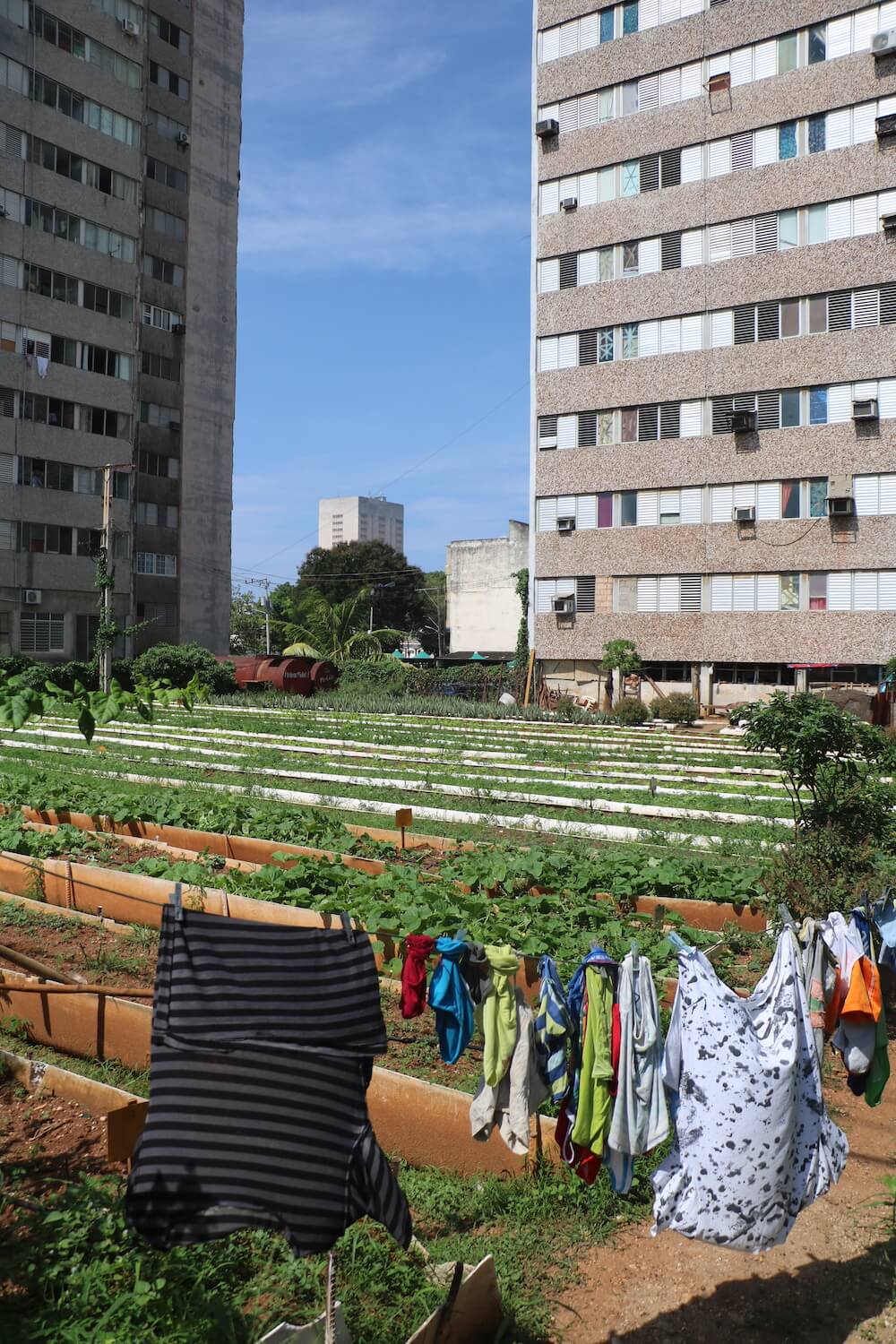 In a world where the digital footprint seems to be increasing every day (it will have tripled in 15 years according to the French GreenIT), we were looking forward to this stopover to study what is called “the low-tech Internet”. At the Low-Tech Lab, we are sensitive to the digital impact (by the way, our website on which you are reading this blog is low-tech (see blog post).

With ingenuity, Cubans have indeed developed several alternatives to the Internet: “underground” networks allowing citizens to reappropriate their means of telecommunication, “offline” media distribution networks, or the design of antennas to increase the range and signal strength of WiFi antennas, made from recycled components such as old USB keys, deodorants, metal cans, copper cables and plastic tubes. 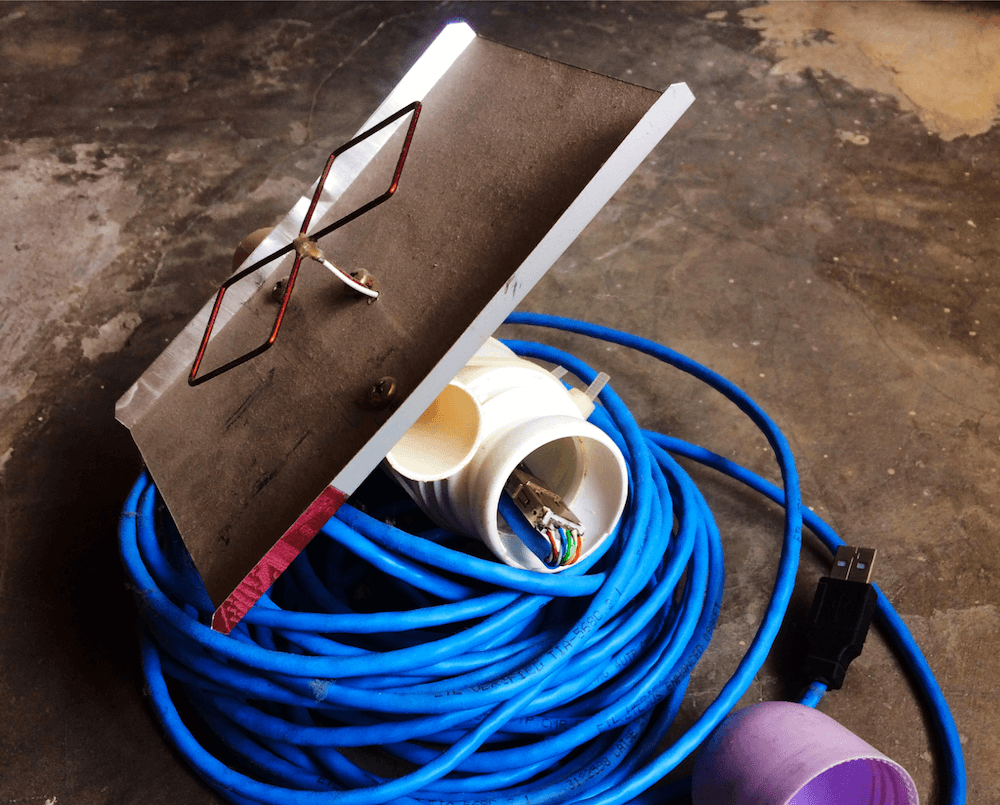 Surfing the internet has become a daily task like eating and drinking. Just like each tomato that reaches our plates, there is an ecological impact behind each google search: each click, each browser page, each video downloads tons of information stored in data centres installed all over the world, which are in turn cooled by other machines.

Here we discover a local network: the data is on the users’ computers and the network allows the data to be exchanged locally between them.

With the help of the offline internet network organisation, one connects to the network by installing an antenna that one can build oneself. In addition to overcoming the problems of limited connection, this system is very economical: you pay once for the antenna equipment and then have access to the network for free. What resilience in the event of pandemic or climatic events!

This intranet is inspired by the one built by an online gaming community because of the precariousness of the equipment and access. Back then it was wired systems, today it is a hybrid mesh with wired and wireless (wifi) components. The largest of these, Havana’s SNET (street network), emerged around 2001 and evolved from hundreds of local neighbourhood networks connecting to each other. It has long been considered the largest community network in the world, entirely isolated from the Internet, linking tens of thousands of users, with some 8,000 computers in Havana alone. 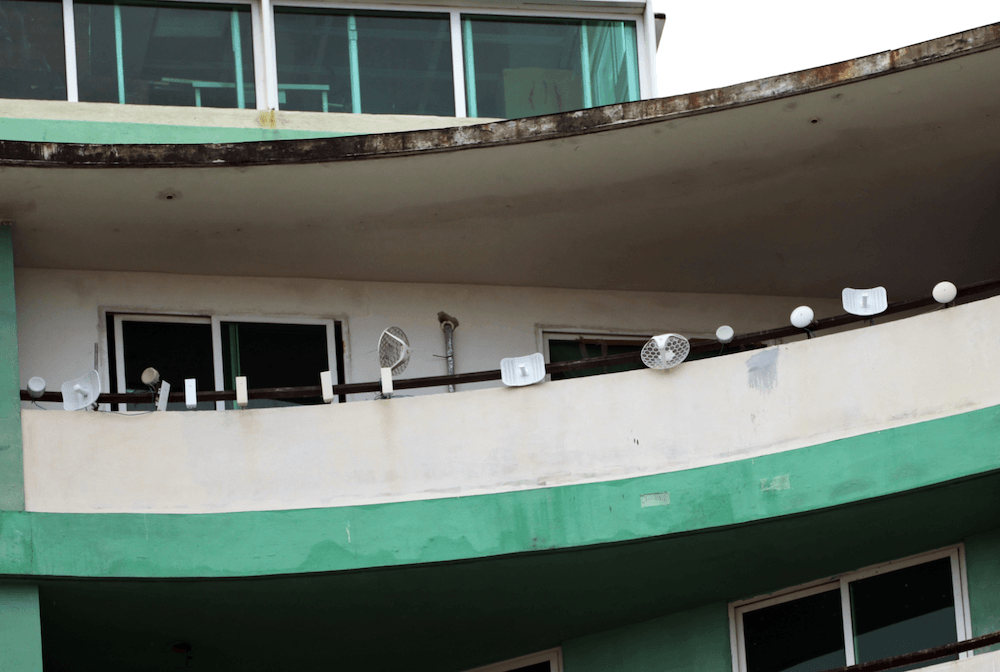 One of the central nodes of the SNET network © Nesto Siré

SNET, now called JDC, has become an offline mesh network operating within the island. Several networks in Cuba are being connected to each other. They are linked via M2 and M5 NanoStations, generating private Wi-Fi and LAN networks running from the capital of Cojímar in eastern Havana to the city of Bauta in the neighbouring province of Artemisa in the west. Other similar networks, albeit with a smaller geographical scope, have also emerged in cities such as Matanzas, Santa Clara, Camagüey or Holguín, further to the eastern end of the island.

WEEKLY PACKAGES FOR EVERYONE

Other networks provide the “Weekly Package” (Paquete Semanal), a collection of one terabyte of media (music, TV programmes, films, games, etc.) assembled on a USB stick and distributed once a week throughout the country from hand to hand. It is an alternative developed with the complicit silence of the Cuban state. Mainly based on piracy, a Paquete Semanal contains 15,000 to 18,000 files, different depending on the distributor and the week. It is accessible every week throughout the country at a price equivalent to two dollars. Because its price is not really low, several people usually get together and contribute to its purchase.

The Weekly Package has been thriving for over four decades.

Its history begins in the 1970s, a decade after the start of the Cuban Revolution and the nationalisation of all mass media. A network of clandestine markets based on the rental of entertainment equipment escaped state regulations and developed throughout the island. At first, books circulate underground, then magazines, video cassettes, CDs and then DVDs…

We tested the Paquete Semanal on board the Nomade des Mers and although the question of copyright is raised, it is still not at the centre of the public debate, even if it produces friction in Cuba: in a country that suffers from a commercial and economic blockade, piracy has naturally become an alternative accepted by the State to meet the simple need to access information. It is the most important popular cultural phenomenon in the contemporary Cuban context, the result of decades of ingenuity and organisation of informal networks.

Many thanks to Nestor Siré for sharing his fabulous work on the world of low-tech internet. More information: his website.

THE HUMAN INTERNET: IMMERSION IN THE COPINCHA

The pandemic, which is gaining ground every day, makes our mission difficult. It was impossible to travel around the country to meet all the low-tech projects we could find. But we ended up knocking on the door of Maurice, a young Cuban who is very active in the network of Cuban makers. In 2018, he transformed his flat into a real workshop: La Copincha (“The Co-Makers”). It is the only makerspace on the island. 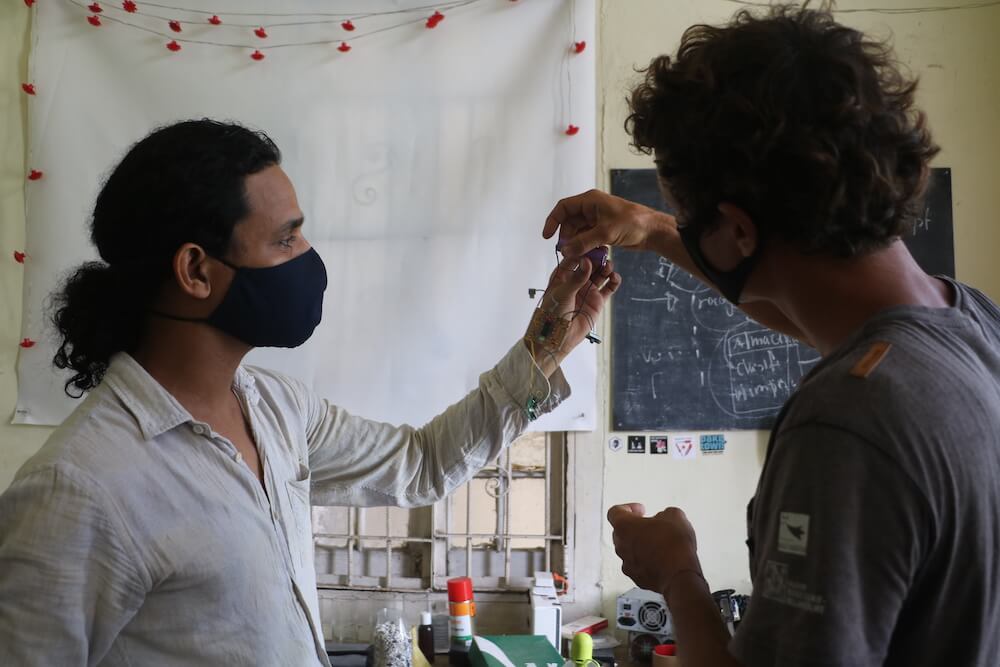 After walking through the kitchen, we discover a workbench full of tools. Each cupboard, each stool, is filled with electronic circuits, motors, and all sorts of well-sorted salvaged parts ready to be used for making prototypes. The Copincha is a space open to all to make, tinker, repair, reflect and meet. Before the arrival of the Covid, Maurice welcomed about twenty people every day! He shows us some of the projects he has completed. At the back of the workshop, we recognise a machine from Precious Plastic, which recycles plastic waste. There is also an ingenious communication system that sends data to phones, Arduino electronic circuits “made in Cuba”, a camera that automatically turns towards you to take your picture, a clever transformation of bottle caps to form irrigation pipe junctions… We discover that the workshop is a creative space for both technical needs and artistic desires. 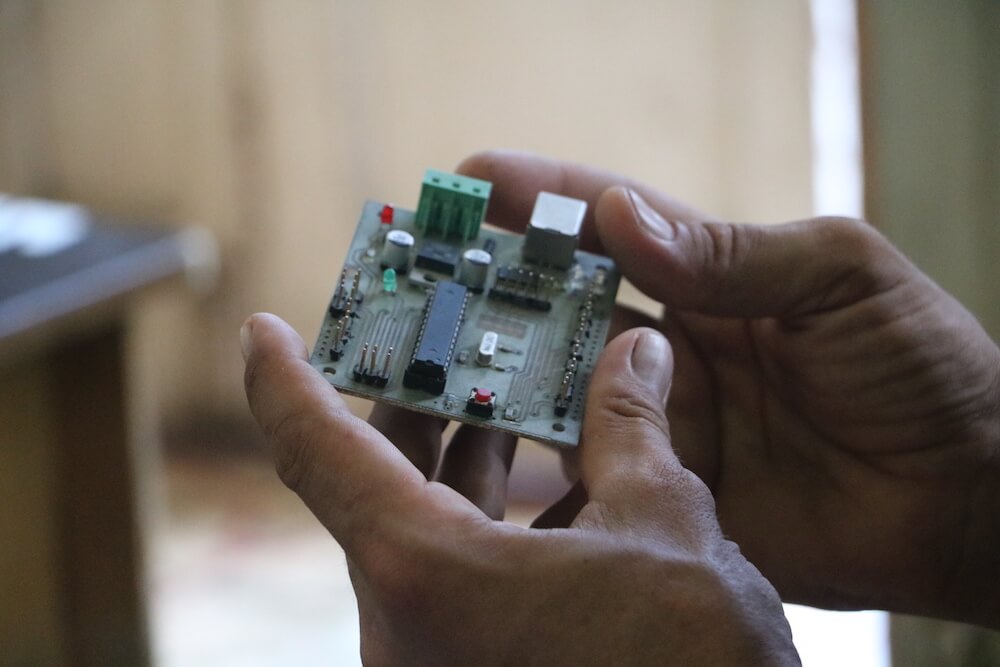 Arduino made in cuba © Low-tech Lab

Maurice does not stop at simply making his place available. He is convinced that networking will lead to good innovations. To this end, he and his friends organise café-rencontres where they discuss various topics such as urban mobility, invite project leaders to present their work to the community and organise repair cafés. Each meeting is an opportunity for him to create connections from which new ideas and projects can be born. Maurice sees Cubans as the neurons of a large brain: by connecting them, intelligence can be born and solve many of the problems the island is going through! 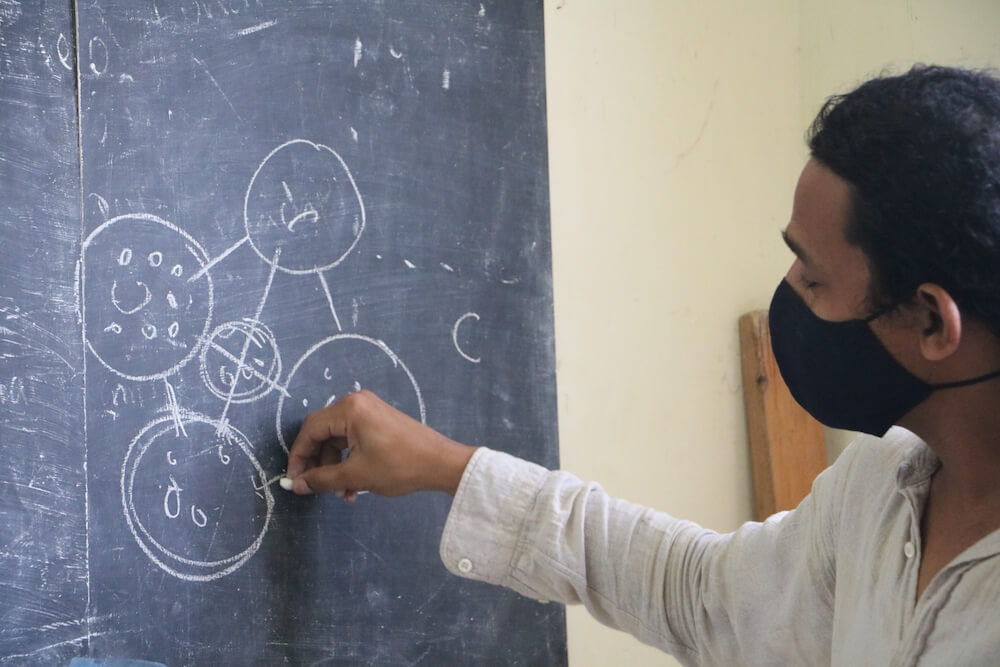 The next day, it was our turn to welcome Maurice aboard our floating Copincha. We present him with our work and all our onboard prototypes. We are passionate about the same subjects and, even if we already have to leave for other ports of call, a new synapse is created between the Cuban network of makers and the Low-tech Lab! 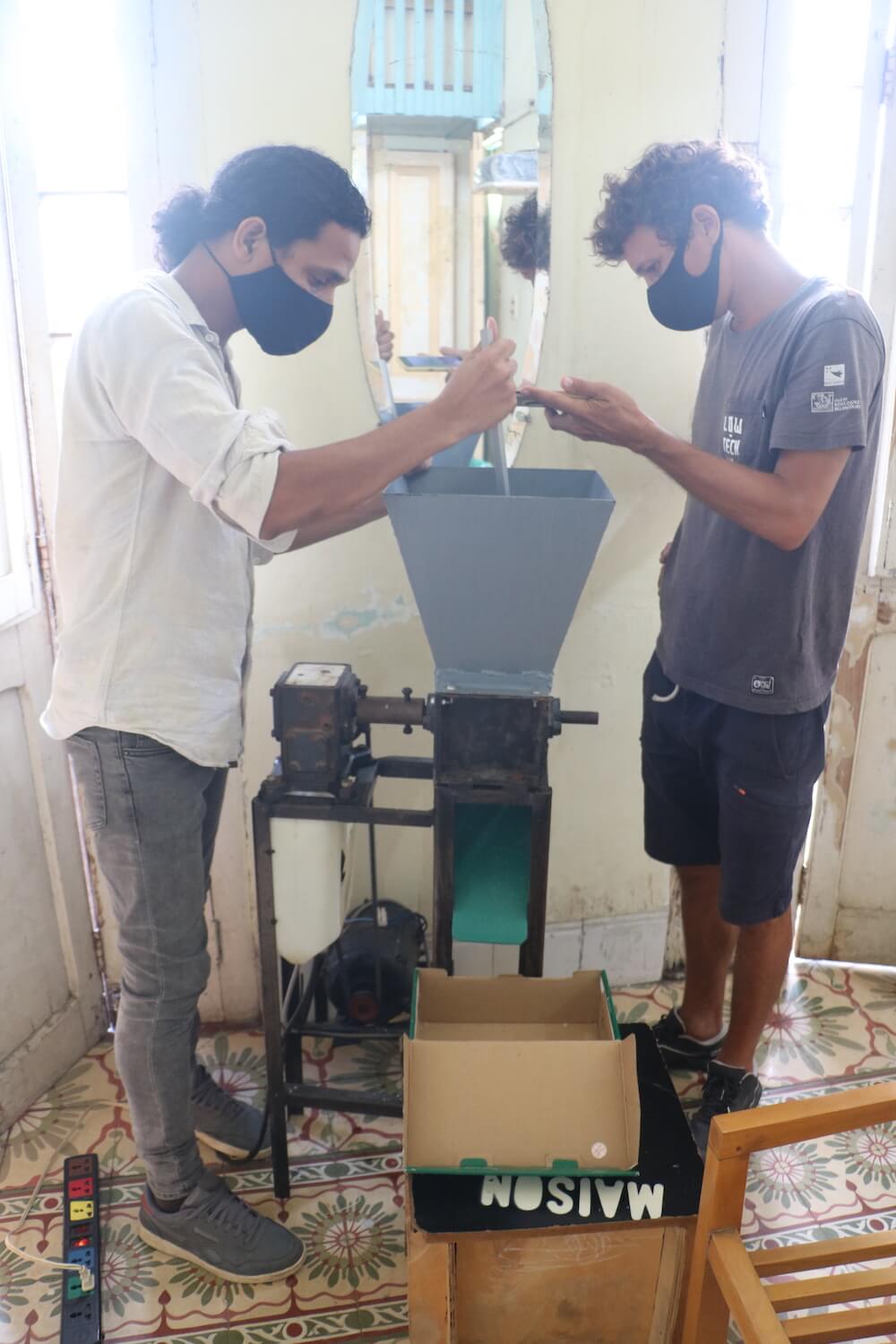 Seek and you shall find, but above all, contribute because these tools are open to all!