Can you think of a book published in the twentieth century that we still remember 50 years later? There is one that has left such an important mark that we are celebrating its fiftieth anniversary. It is the report to the Club of Rome published in 1972 with the title “The Limits to Growth”. 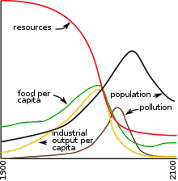 “The Limits to Growth” was a study of the future of the global economy. Its basic message was that growth could not continue to go on forever on a finite planet. And not just that. It also said that if we continued to exploit natural resources without worrying about depletion, pollution, and overpopulation, things would start to go pretty bad: the economy would collapse. When? Maybe during the first 1-2 decades of the 21st century.

The message of “The Limits to Growth” was hard to digest in the 1970s, an age of optimism and enthusiasm for technological progress and economic expansion. So, from the beginning, the study was criticized and demonized in every possible way, so much that many people, still today, are convinced that it was “wrong” for one reason or another. Actually, there was nothing wrong with the study: it was only affected by the unavoidable uncertainties in the parameters of the system. But the very fact that it was demonized so heavily means that it said something fundamental, relevant to our survival as a civilization and perhaps even as a species.

But what was so special about that book? Many things: perhaps the most important one was that it was the first study that addressed the problems of the future of humanity in a “systemic” way, that is, using a model that, for the time, was incredibly sophisticated. Let me explain: today there is a lot of talk about “artificial intelligence,” but the concept was born in the 1960s. “The Limits to Growth” was part of the concept of using computers as a tool to help human intelligence.

One of the problems we face when we try to manage complex systems, that is systems where many factors interact with each other, is that the human mind heavily relies on “intuition.” We tend to focus on single parameters and consider them as the only relevant factor. Did you notice how people tend to interpret the world’s problems on the basis of single factors? “Overpopulation!” “Climate change!” “Pollution!” “Peak Oil” “The public debt!” and so on. All these are relevant factors, certainly, but none of them is the only problem. But how can we estimate their effect when every single factor interacts with all the others? If you focus on the wrong parameter, you can make enormous mistakes.

That’s where a computer can be helpful. The computer is not intelligent, but for this very reason, it is not swayed by ideology or other kinds of personal biases. So, in 1972, the authors of the “Limits to Growth” created a computer-based model that analyzed the human economy according to various hypotheses on the availability of resources, pollution, population growth, and other things.

It was not a prophecy, not a political program, and not a religious revelation, either. The “Limits to Growth” model was simply an evaluation designed to answer the question, “what will happen if ……?” The results were stark clear. If the economy remained focused on growth at all costs, the global economic system would reach its physical limits around 2010-2020. And it wasn’t just a matter of stopping growth. It was much worse: the model predicted the collapse of the system.

Today, given the current situation, we may legitimately wonder if we are finding ourselves at the beginning of the collapse that some of the scenarios of “The Limits to Growth” had seen in store for humankind. Is that our future? Maybe, but let me repeat that “The Limits to Growth” was not a prophecy: there was nothing unavoidable in the scenarios it proposed. And the authors never saw themselves as prophets of doom. The study was conceived as a roadmap to avoid collapse!

Unfortunately, we didn’t put into practice the solutions that the study proposed, such as reducing the consumption of natural resources, slowing down economic growth, and the like. But it is also true that today many things have changed. The revolution in renewable technologies has changed the rules of the game. With renewable energy, in principle, we can phase out fossil fuels and avoid the main causes of the coming collapse: depletion and climate change. Yes, but this does not mean that renewable energy comes for free: we have to invest in it and not a little. Unfortunately, up to now, we have not invested enough, not to mention the bureaucratic obstacles that hinder the new installations.

Even if we could move toward renewables fast enough that we could smoothly replace fossil fuels, that would not be sufficient to avoid all problems. Never forget that the origin of collapse is its opposite: growth. Already long ago, the Roman philosopher Lucius Annaeus Seneca, noted that ruin is rapid after growth: it is called the “Seneca Effect.” If we want to avoid the “Seneca Cliff,” the rapid decline that arrives after the growth phase is over, we need to recognize the limits of our planet. Growth at all costs is a dream of the 20th century, that we must abandon now.

So, we are facing difficult times, but we can muddle through if we make the right choices. Meanwhile, there is a new book that re-examines the whole story of “The Limits to Growth” and its relevance for our present and our future. It is titled “Limits and Beyond,” a multi-author book that includes contributions from 21 authors, including two of the original authors of the 1972 “The Limits to Growth.” It is edited by Ugo Bardi and Carlos Alvarez Pereira. Already available for purchase!