Ed. note: This article first appeared on ARC2020.eu. ARC2020 is a platform for agri-food and rural actors working towards better food, farming, and rural policies for Europe.  You can read Part 1 of this article on Resilience.org here.

The Sustainable Food Consortium is a collective of local people working to make the food transition a reality in the territory of Redon, Brittany. It began as an attempt to recreate the atmosphere of a popular farming festival. One of its co-founders, slow food cook Xavier Hamon, tells us about the journey so far, and shares his latest fair local food project – an on-farm restaurant. Part 2 of a conversation with Valérie Geslin.

Fête de la vache nantaise is a farming festival that happens every four years. It’s run by local breeders of the Nantaise cow. It started off small and at the last one there were 60,000 people over three days.

The main topic is: how does that bring everyone together in a territory? It’s a rare alchemy. People wouldn’t miss this festival for anything. I had time and I was there two or three days a month to organise part of the festival.

It’s an incredibly fertile ground and everyone gets involved: 1500 volunteers over 3 days. There are 80 people in the organising team. There was one paid member of staff in 2018. At the end of the festival, they said if we do it again, we have to hire staff for some of the roles because it was too big!

Time to reorganise and reposition

As a result, some of us made a proposal to the Redon conurbation authority [communauté d’agglomération] to create a collective: the Sustainable Food Consortium.

The consortium is independent. There’s no legal entity. It’s an agreement between actors who decide to team up for a given period on a given issue, and it defines the remit of each. At the moment, the purpose of the consortium is to bring together, quite broadly, local actors and groups.

We united behind policy advocacy – the first collective political construction. The Redon conurbation authority was looking to break down these barriers; it’s become fairly easy.

I’m attached to the consortium even though right now it’s having a hard time. It helped us determine our weight: a territory that knows what it wants in spite of huge political obstacles. The consortium is not supposed to last long – just the time to organise the territory differently and let everyone reposition. It needs to gain recognition from politicians.

What’s interesting is working with people. When you bring in people who aren’t in farming or food, from other backgrounds, words are measured. I find it interesting to learn not to say everything and anything, to measure or argue your point.

In December we told our elected representatives that we need resources to proceed. We looked for European funds, grants to animate the work. Because we got no positive response, we decided for the first time to stop taking the place of the municipal funding. We had coordination, we were doing lots of things and, yet again, volunteers filled the gaps. 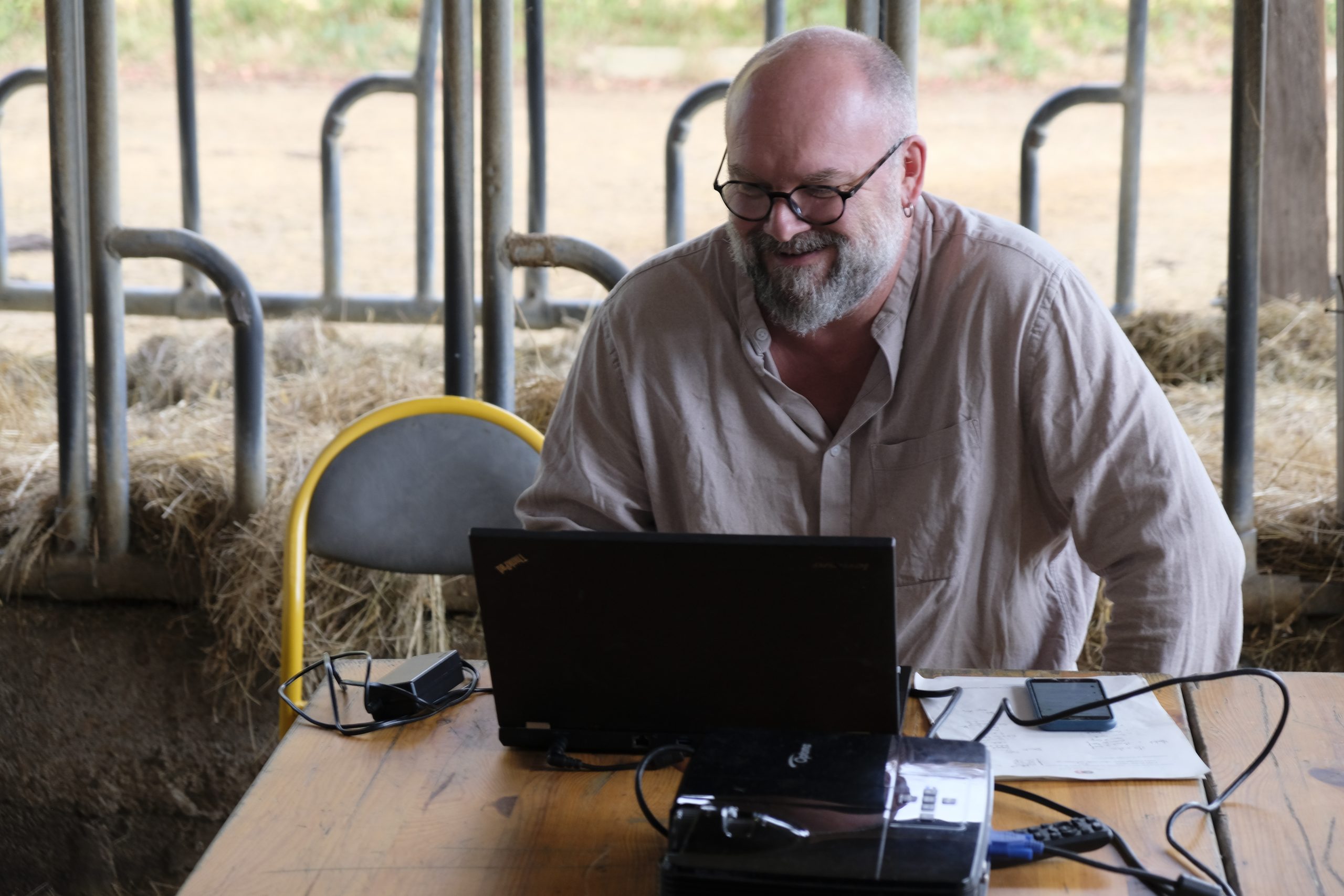 “We know how to do things differently”: for Xavier, the famous transition is about changing the power-based relations between cooks and farmers. Photo: Hannes Lorenzen

Now I come to the final topic which for me could be a key to the future. My experiment with la Ferme des 7 chemins, with the idea of an on-farm restaurant, is emblematic.

The three associates of the farm (GAEC) bring in another dimension of farming: economic development, personal development, family life. They told me: we’d like to create a restaurant on the farm. Come and discuss this project with us. Friends who have restaurants in Paris are discussing with them. These two worlds have been working together for years but they have to get to know each other better with this common project.

The restaurant managers bring their industry costs, their ideas, and their economic and social model. Then there are the producers with their farm. It’s something else entirely than an economic model or a local breed: they want to create a space that showcases the territory as a hive of cultural activity. We have to learn to do that together.

I never earned so much in my life!

Then there’s the customer. We were working on a costing with [the farmers] Mathieu and Cédric. There’s  market on the farm on Friday evenings. I offered to do a cookery workshop using products from the market.

We shared the meal. After preparing it, we costed the recipe. And the variable was the cook’s pay. It was great. I’d put in all the expenses including electricity, rent, and so on. We divided by the number of servings. The only unknown was the cook’s hourly rate. We asked people to define this unknown. I never earned so much in my life as I did that day! They all wanted us to be paid well because they estimated that a normal wage is €2,000 – €2,500. I explained to them that that was far from the reality. They were flabbergasted.

Another question was to do with the farm products: Can you make a living from this? The restaurant should be for that. The on-farm project is crucial but there’s no model to follow. And it won’t be a model either. We’ll just be able to summarise the steps we had to go through to find a balance.

Voilà. That’s my relationship with farming. These power-based relations need to change. The famous transition. We know how to do things differently. Plenty of solutions have been around a long time. What we don’t know how to do is give collective organisations the means to emerge and not just follow the political funding. We must have the capacity to make time to think out the structure collectively without losing the political thinking.

In conversation with Valérie Geslin. Translated by Louise Kelleher. This conversation has been edited for clarity.