What’s it really like to start a Transition group? To stick your head above the parapet and see who in your community would like to engage in community action to build a better future? And how do you get something off the ground with all the constraints of a global pandemic?

Despite the Covid crisis, or perhaps in some ways spurred on by different rhythms and priorities, new Transition groups have been forming across the country, and others reforming after years on ice. Chris spoke to three organisers to find out about their journey. 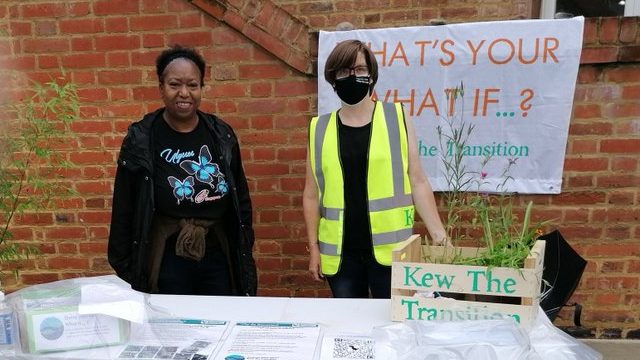 Neighbours Mex and Caitlin founded Kew the Transition in the midst of the pandemic.

Kew the Transition emerged right in the midst of the pandemic.  Mex Ibrahim, cofounder said the pandemic made people more interested in their local community:

“It was started by my neighbour who lives a few doors down – she wanted to try and get a few of the neighbours together, to see what we could do. We’re in a really green area in Kew, but there’s not really a lot of action amongst the community.”

With restrictions on meeting up, they held a few zoom meetings, street stalls and took part in the What Next? summit and Transition Network’s Launch Online training to find out more. 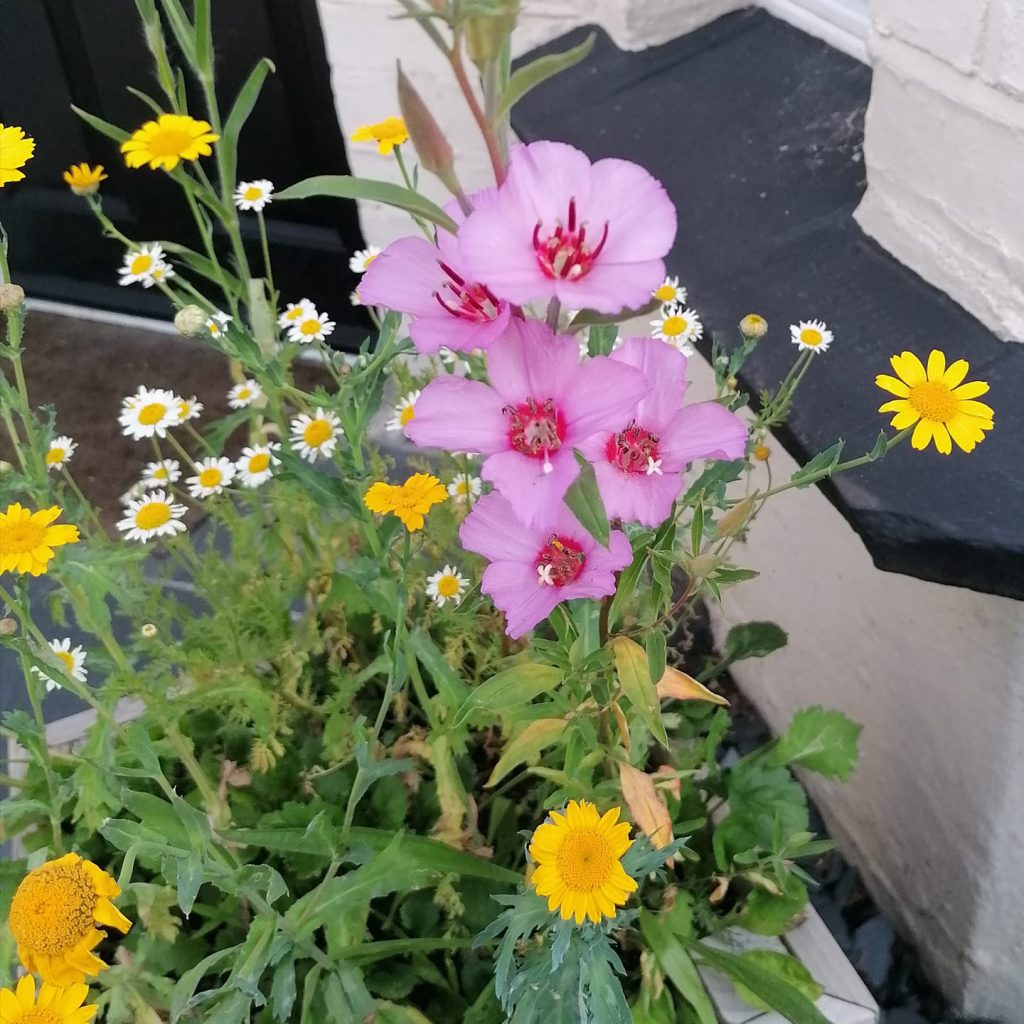 Kew Mini Meadows popped up along main roads and public spaces and were a great conversation starter.

When Bounce Forward seed-funding was offered to groups, the Kew group applied to create some mini meadows – planters of wild flowers for schools, public spaces and for households to adopt, water and tend. The mini meadows had a sign introducing Kew the Transition, and as they appeared on the main road, they made a great talking point to introduce the group.

Though the core group were neighbours living along one road, it was forming a Transition group that forged new friendships. Mex said:

“I had seen a few of the other people before but I didn’t really know them, so this has definitely brought us much closer together.”

Soon people in other parts of Kew wanted to get involved. Being present in the local community helped to spread the word, said Mex:

“I think the best thing that’s worked for us has been putting up posters on lampposts outside shops because people tend to respond to those better than our social media.”

As restrictions ease, their hope is to get off Zoom, meet together face-to-face and get excited about some concrete plans for 2022. Involving more people and connecting with local groups will bring new energy, Mex added.

While the pandemic has made it hard for community action, it has also created new opportunities. Across the country, in Middlesborough, Transition Teesside first came together on Zoom, something with which we were becoming all too familiar.

Catherine Howell had tried to start a Transition group some years ago, but it fizzled out. Now working for a food growing social enterprise, she saw the need for a way to bring people and groups together across a range of interests. Catherine said:

“I always liked Transition Towns because it seemed to be quite an easy approach, not onerous, not political, it seemed like a nice friendly framework. I got together with a few people and suggested that we reignite this.”

The chance to apply for Bounce Forward seed-funding came along at just the right time for the fledgling group – they used it to develop a logo, website, hold three workshops with guest speakers and run a permaculture course. Catherine said:

“That little, tiny grant really did help kickstart things and clarify our thoughts. It’s been easy to manage. It has kicked us up the backside to say ‘now’s the time’ and it did go quite far really!” 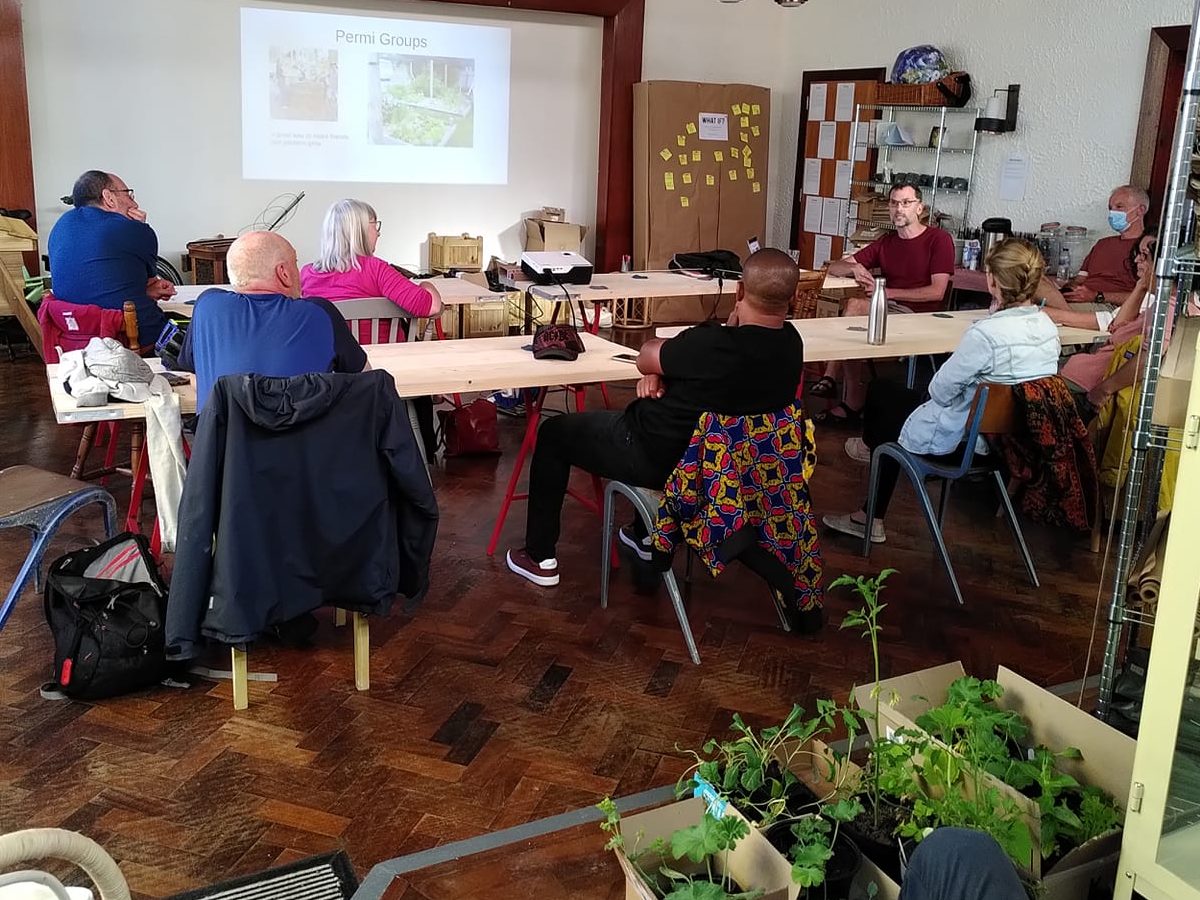 Transition Teesside brought people together with workshops, giving practical solutions to the climate crisis and a sense of connection.

People got involved initially through word of mouth – and small numbers made it possible to meet in person. The sessions were varied – each attracting a different audience.

“We had a specialist social enterprise who came and talked to us about inclusion and the language that’s used and issues facing people from minority ethnic backgrounds and how we can talk in a way that includes everyone.” Catherine said they felt it was particularly important because Middlesbrough is a very diverse town: “It was a lot to think about, a lot of eye-opening conversations, it was great.”

The workshops gave people solutions they could use – and importantly a sense of connection:

“On a household level, people were maybe feeling there’s not much they could do,” Catherine reflected. “Just coming together and not feeling like they are isolated, fighting a battle on their own, that connection’s been really important.”

Feeling part of the wider Transition movement was also important. Teesside members joined the What’s Next? Summit last Spring, and were really inspired by plans for a climate response centre by Transition Towns Totnes – they are now exploring something similar locally.

The town of Heswall had no Transition group, but a few interested people living there were travelling to get involved in nearby groups like Liverpool and West Kirby. Then in 2019, as the wider region held a year of the environment, four or five people came together and decided to start something in their own backyard – Planet Heswall was born, just a few months before the pandemic.

“We got people together at a local organic farm that’s a day centre for people with learning disabilities and held a ‘Green Summer Supper’ with people from different organisations and groups across the community. We looked at what would be the areas where we might want to work together.” 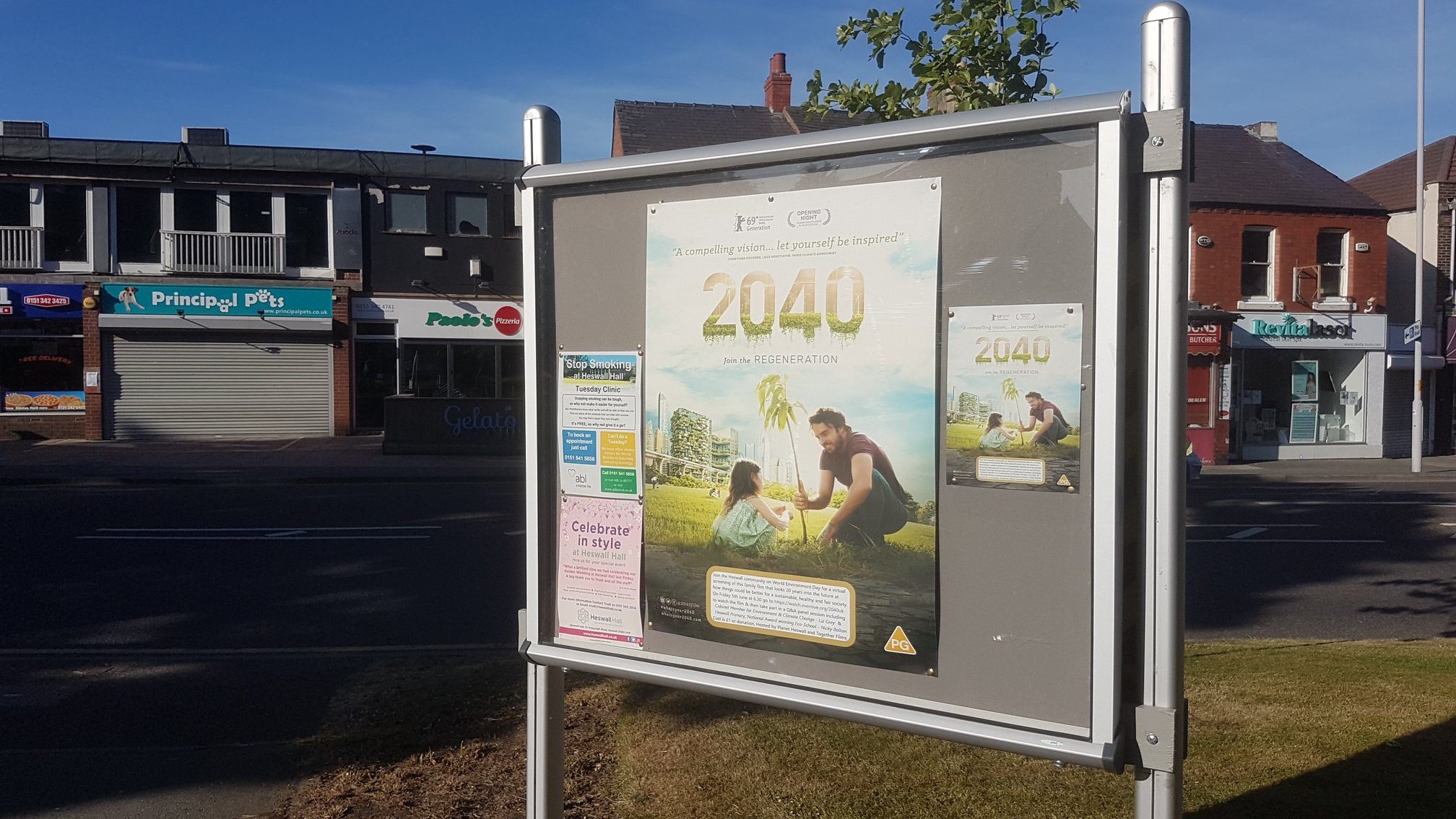 Planet Heswall used an online film screening and panel discussion to reach out to the community and start a discussion about a better future.

Two follow up meetings continued to build connections and some common interests began to emerge, particularly around growing food – then lockdown hit. It was a difficult time for everyone for a few months, but Nick said:

“After we had come to terms with the whole pandemic situation, we put on a screening of the film 2040, we put up some posters around Heswall and had a panel discussion after the event.”

Around 100 people joined in.

They followed the film by exploring a new vision for their town of 13,000 residents, many retired. Over lockdown, Nick was involved in a separate project to map all the groups and clubs in Heswall and it highlighted how much was going on. As awareness rises and many other groups get involved in climate activity, Nick believes the role of transition groups is changing – less about initiating or doing everything and more about creating a space for connection, to “weave all the stakeholders together”.

“People are more interested in doing something in a transition space because they are starting to wake up to a climate crisis and politicians aren’t very good at solving things for us,” said Nick. “This is a moment where Transition could kind of capture more momentum from people who are wondering what they could do.”

All the groups feel the pandemic has held them back, and share a hope to get more people involved and be able to do more face-to-face activities in 2022. Catherine said:

“It would have been great to have a Transition Teesside launch as part of an eco skills festival, but that’s impossible right now, so it’s limiting what we can do.”

For Kew, it’s been hard for the group to grow without meeting face-to-face. Mex shared:

“My hope for the group is to try and get more people to take more responsibility, so it’s not falling on a couple of us. We’d like to work with other organisations in Kew, like neighbourhood associations and the WI – to find out a bit more about what we all do and how we can work together, because it’s got to be strength in numbers. We all live in Kew and we’ve got that in common.”

Planet Heswall plan to continue working on a vision with the local community at local events. Nick said:

“It feels like it’s starting to emerge from a dormant phase… It feels like an important year for Planet Heswall, it’s got to come into its own this year. If it just stays as that small initiating group, it’s not going to really embed itself in the community. Part of what we are trying to do is raise that awareness and really get people bought into it, transition as an idea.”

“That needs to be shaped by the people involved in it. There’s no point in one or two people saying this is what it’s going to be. Every transition town is different and they are all based around the unique character of a community. That’s why you’ve got to build it from within.”

Find or start a group near you