The following open letter was issued by an international coalition of prominent scientists and governance scholars on January 17, 2022. It calls for an international treaty to outlaw attempts to reduce global heating by blocking sunlight from reaching earth.

Sixteen of the signatories are co-authors of Solar geoengineering: The case for an international non-use agreement, published simultaneously in the journal WIREs Climate Change. That paper concludes:

“Solar geoengineering is not necessary. Neither is it desirable, ethical, or politically governable in the current context. With the normalization of solar geoengineering research moving on with rapid speed, a strong political message to block these technologies is needed. And this message must come soon.”

Solar geoengineering – a set of hypothetical technologies to reduce incoming sunlight on Earth – is gaining prominence in debates on climate policy. Several scientists have launched research projects on solar geoengineering, and some see it as a potential future policy option.

To us, these proliferating calls for solar geoengineering research and development are cause for alarm. We share three fundamental concerns:

First, the risks of solar geoengineering are poorly understood and can never be fully known. Impacts will vary across regions, and there are uncertainties about the effects on weather patterns, agriculture, and the provision of basic needs of food and water.

Second, speculative hopes about the future availability of solar geoengineering technologies threaten commitments to mitigation and can disincentives governments, businesses, and societies to do their utmost to achieve decarbonization or carbon neutrality as soon as possible. The speculative possibility of future solar geoengineering risks becoming a powerful argument for industry lobbyists, climate denialists, and some governments to delay decarbonization policies. 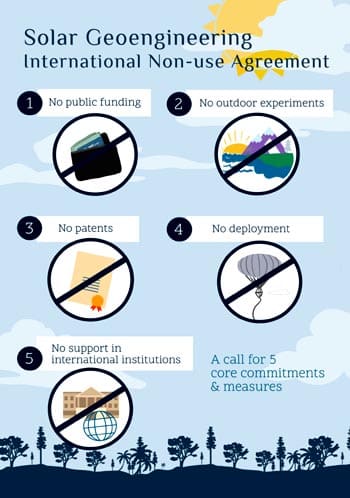 These concerns also arise with informal governance arrangements such as multi-stakeholder dialogues or voluntary codes of conduct. Informal arrangements face barriers to entry by less powerful actors and risk contributing to premature legitimization of these speculative technologies. Science networks are dominated by a few industrialized countries, with less economically powerful countries having little or no direct control over them. Technocratic governance based on expert commissions cannot adjudicate complex global conflicts over values, risk allocation and differences in risk acceptance that arise within the context of solar geoengineering.

Without effective global and democratic controls, the geopolitics of possible unilateral deployment of solar geoengineering would be frightening and inequitable. Given the anticipated low monetary costs of some of these technologies, there is a risk that a few powerful countries would engage in solar geoengineering unilaterally or in small coalitions even when a majority of countries oppose such deployment.

The International Non-Use Agreement on Solar Geoengineering should commit governments to five core
prohibitions and measures:

An International Non-Use Agreement on Solar Geoengineering would not prohibit atmospheric or climate research as such, and it would not place broad limitations on academic freedom. The agreement would instead focus solely on a specific set of measures targeted purely at restricting the development of solar geoengineering technologies under the jurisdiction of the parties to the agreement.

In sum, an International Non-Use Agreement on Solar Geoengineering would be timely, feasible, and effective. It would inhibit further normalization and development of a risky and poorly understood set of technologies that seek to intentionally manage incoming sunlight at planetary scale. And it would do so without restricting legitimate climate research. Decarbonization of our economies is feasible if the right steps are taken. Solar geoengineering is not necessary. Neither is it desirable, ethical, or politically governable in the current context.

Given the increasing normalization of solar geoengineering research, a strong political message to block these technologies is required. An International Non-Use Agreement on Solar Geoengineering is needed now.

Photo by Tom Barrett on Unsplash