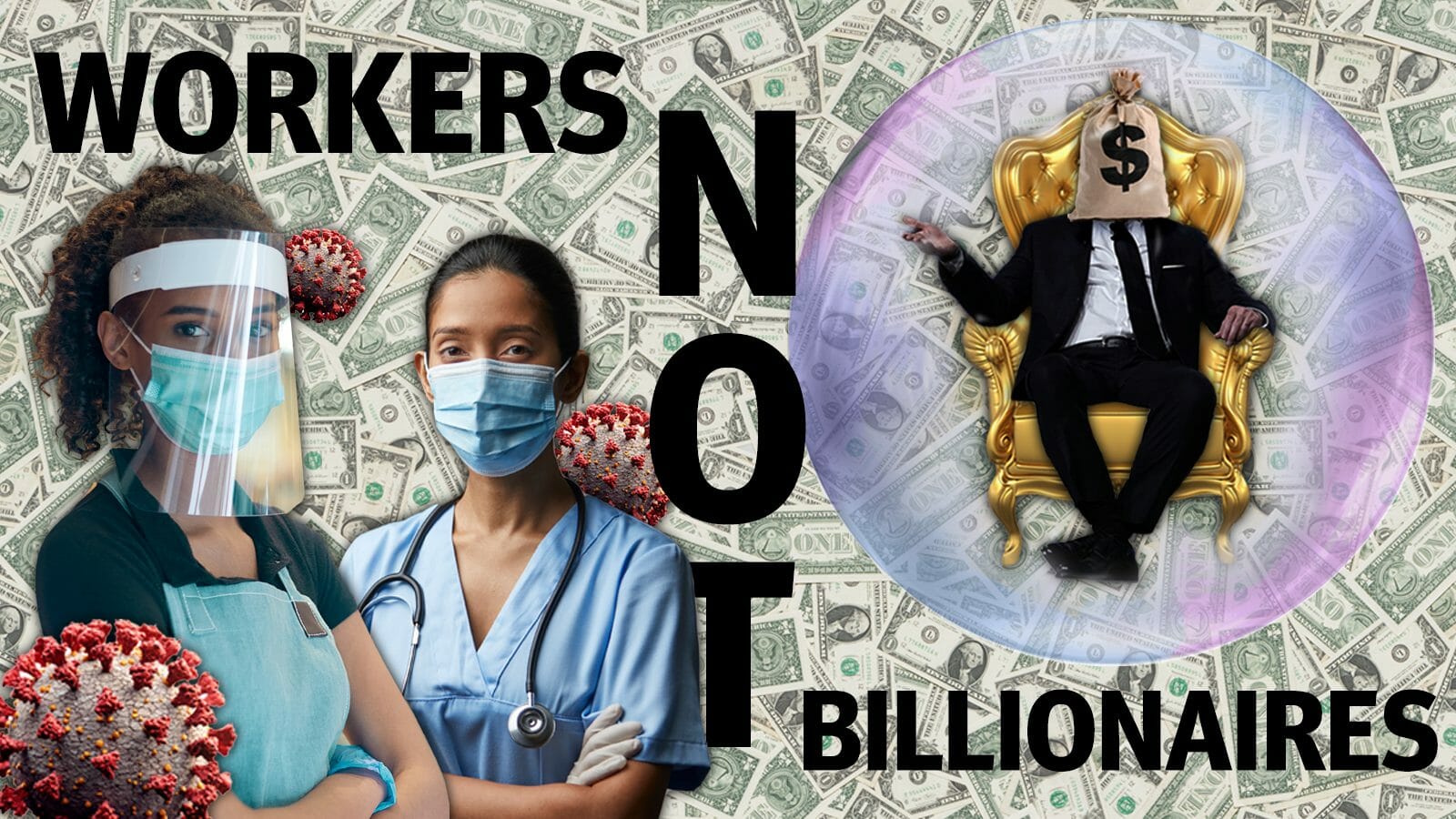 Three owners of Walmart — Rob, Jim, and Alice Walton — have seen their combined personal wealth increase over $48 billion. In 2018, Walmart’s CEO Doug McMillion made 1,118 times the pay of Walmart’s median worker. Yet Walmart refuses to provide hazard pay to its workers.

The wealth of Amazon’s Jeff Bezos has increased by 62 percent since mid-March, totaling $188.3 billion as of November 17. Bezos is now the richest person on earth. Meanwhile an estimated 20,000 Amazon workers have been infected with COVID-19. 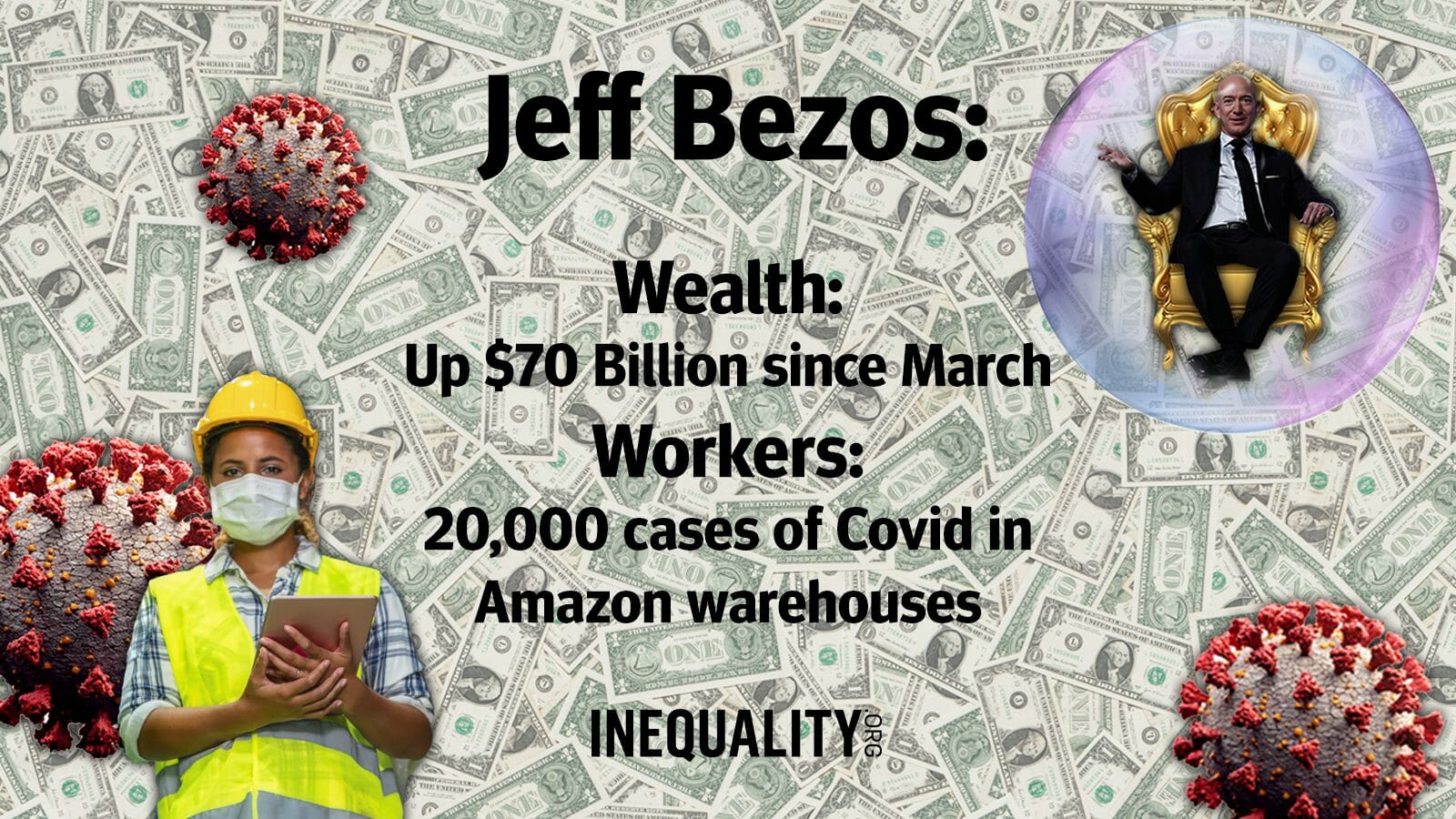 CEO and founder Apoorva Mehta became an instant billionaire in June 2020. Yet Instacart has over-hired 300,000 new workers and failed to provide sufficient protections.

John H. Tyson, the billionaire owner of Tyson Foods, has seen his personal wealth increase over $600 million since the beginning of the pandemic. Meanwhile an estimated 11,000 Tyson workers have been infected with COVID-19.

Target CEO Brian Cornell is paid 821 times the median worker at Target. The company has enjoyed a protected status as its competition was shut down during the pandemic as “nonessential.”The company enacted an already promised $2 increase in its starting wage, but also cut the pay of its Target-owned Shipt delivery workers.

Dollar Tree CEO Gary Philbin is paid 690 times his median paid worker.Dollar General CEO Todd Vasos is paid 824 times his median paid worker.The companies have profited tremendously during the pandemic, but understaffed stores and skimpy security pose some of the many risks to workers — including an increase in assaults when Dollar Store workers were attacked for asking customers to wear masks. The investment fund giant BlackRock has a large ownership stake in both companies.

Private equity giant Blackstone owns TeamHealth, a company that demoted a whistleblower doctor who went public about the company’s lack of COVID-19 safety precautions and aggressive cost-cutting. Blackstone founder and CEO Steve Schwartzman has seen his personal wealth increase $4.1 billion since the beginning of the pandemic.

KKR owns Envision HealthCare. In April 2020, Envision announced it was withholding some pay for doctors, between $4 million to $5 million per practice for a group of about 16 to 30 doctors. During the same month, the President of Emergency Medicine reported a growing number of Envision doctors under quarantine.

Cerberus Capital owns a number of companies with frontline essential workers, including Albertsons and Safeway supermarkets and Steward Health Care.Steve Feinberg, the billionaire cofounder of the private equity firm, has seen his personal wealth increase $276 million since the beginning of the pandemic.

In June 2020, a group of Steward Health doctors purchased a controlling stake in Steward from Cerberus. Prior to that, the private equity giant drew fire for shutting down intensive care units in rural Massachusetts and failing to provide sufficient PPE equipment.

Meanwhile, Safeway markets had initial hazard pay that ended in June. Since then, COVID-19 infections have increased 161 percent in Safeway stores.

The UK-based BC Partners owns the pet supply company PetSmart, which benefited from its designation as an essential business. But that didn’t stop PetSmart from furloughing and then permanently terminating workers across the U.S., causing them to lose health insurance and incomes.

CVC Capital Partners owns the pet supply company PetCo, another essential business.   CVC Partners just announced it is looking to take PetCo public with a valuation of $6 billion, even with worker reports of serious health and safety issues.

Corporations and their billionaire owners and investors have the responsibility — and more than enough resources — to protect their employees during this extraordinary time. They must commit the resources necessary to put essential workers’ and their communities’ health and safety first. 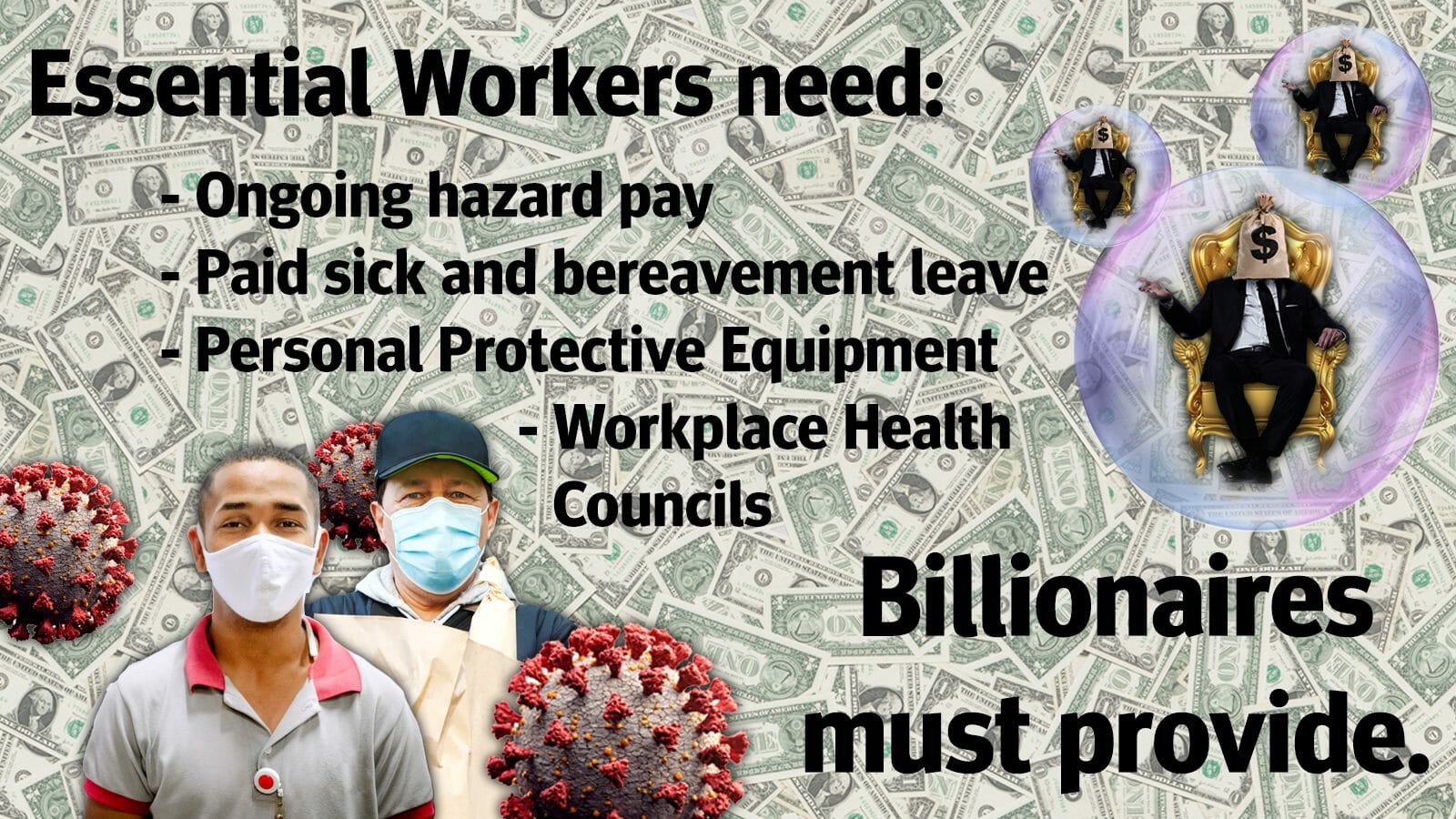