Gradually, and then suddenly. That’s how exponential growth can ruin your day, undo your family, evaporate your economy, destroy your climate, crush an empire and destabilize a planet.

Consider the performance of COVID-19.

In June a 30-year-old male attended a “COVID party” in San Antonio, Texas.

At a COVID party, the host has tested positive. He or she then does not sit down with a math primer to understand how many human dominoes they might cause to fall. Nor does the host watch this handy video which, in three short minutes, explains the deadly implications of exponential growth of infection.

WATCH: A mathematician explains the power of exponential growth to spread the coronavirus at increasing speed throughout a population if unchecked by social distancing and other measures.

No, at a COVID party the host invites others to come over and mingle, have a few drinks, test fate, laugh in the face of reality.

The 30-year-old male who came to the COVID party died several weeks later, but not before he made a brief confession to the nurse attending him. “I think I made a mistake, I thought this was a hoax, but it’s not.”

That’s how exponential growth can ruin your day.

The percentage of people testing positive for COVID-19 in Texas has risen steeply in recent weeks. Up to 22 per cent of tests showed positive in the San Antonio area in July.

But exponential growth looks like a jet taking off. It is rapid and explosive and follows a geometric progression. It is often about doubling times.

After China reported its first case in December of what was later identified as COVID-19, it took 67 days to reach the first 100,000 global cases.

No big deal, we thought.

Now the world reports 250,000 cases every day and this pandemic has just gotten started.

When the numbers are small, we ignore them and underestimate the threat.

As a self-important species, we also tend to ignore small things. We don’t respect organisms such as bacteria and viruses, because they are tiny and come with unrecognizable brands. But it takes less time for a micro-organism or insect to double its population than it does humans.

Why this blindness? Humans have trouble imagining a small number becoming a tsunami. Our imaginations stop at the threshold of chaos and go blank.

Years ago, Albert Bartlett, a gentle Colorado physicist with wild hair, tried to convince people that the greatest shortcoming of the human race was its “inability to understand the exponential function.”

Bartlett gave hundreds of lectures on the topic with lots of potent examples.

The good city councillors of Boulder, Colorado, Bartlett’s hometown, thought it a modest goal to want their picturesque city to grow at rates between one and five per cent.

Bartlett did the exponential math for them. In the course of 70 years, a five-per-cent growth rate would turn a city of 100,000 located in a pretty mountain valley into a hellhole of 3.2 million people, with no night sky or open spaces.

A clever man invented a chessboard and presented the gift to a powerful king or emperor. Pleased by the gift, the ruler asked the inventor what he wanted in return.

The inventor placed one grain of wheat or rice on the first square and asked the king to double the number of grains on every square.

What a nitwit, thought the king. “I was prepared to offer the man a bag of gold and all he wants are a few silly grains.”

The king, like most of us, was innumerate — not truly understanding of important mathematical principles. He certainly was blind to the exponential function and its long and deadly tail.

One grain became two, and two became four, and four became eight. At the end of the first row, a pile of 128 grains had accumulated. The king just smiled as bowls of grain became barrels of grain.

By the middle of the fourth row the grains totaled 2.1 billion, and there was no room in the castle. The king grew nervous. If he had honoured the inventor’s exponential request, the kingdom would have had to surrender 9.2 quintillion grains — about 2,000 times current global production.

The king panicked. Either the inventor then lost his head, or he was appointed an economic advisor.

Some see only wealth and unlimited progress in the exponential function.

In 1999 Ray Kurzweil, a technology guru and computer scientist, invented a new expression: “The second half of the chessboard.”

By the second half, he meant the point where exponential growth takes on a life of its own, and “its impacts become massive, things get crazy, and the acceleration starts to elude most humans’ imagination and grasp,” explained Bruno Giussani, the European director of TED, in a 2017 Edge article.

Kurzweil celebrates the exponential growth of robotics and artificial intelligence. Like the Texan on his way to his first COVID party, Kurzweil shrugs and says to himself, it’s all good.

He’s right about the exponential growth of technologies. It took the telephone 75 years to conquer 50 million people, and computers just 14 years to command the same number. But it only took Pokemon Go just 14 days to dominate the imaginations of 50 million consumers.

Smartphones have also followed an exponential trajectory. It took the instrument but 16 years to order the lives of one billion people. But it took only four years for the addictive gadget to infect, engineer and monitor the habits of two billion humans.

Kurzweil believes the sheer abundance of exponential technologies (everything from face recognition to bioengineering) will eventually charm the human world with exponential progress. This digital pandemic will create an artificial rapture leading to “the singularity.”

In the singularity, man and machine will meld into one clever being. Our immortal software-based clones will be too busy playing God to play chess.

But the second half of the chessboard has been and always will be a dangerous and fragile place. COVID-19 is showing this in the United States, Brazil, Italy, Mexico and India.

Meanwhile, the exponential function accelerates the relentless growth of energy consumption, the power of biological invasions and the peril of climate disruption.

About 300 years ago the human population went on an exponential ride thanks to the proliferation of fossil fuels, which allowed an increasing number of people to eat, drink and spend like kings.

The consumption patterns driven by nearly eight billion people have created an exponential assault on the Earth’s finite resources.

Exponential growth again explains why there will be more plastic than fish in the ocean by 2050, and why small particles of plastic can now be found in many vegetables.

When confronted with exponential growth, a gardener can attack every dandelion or thistle as they rise. Or they can watch their garden quickly become a kingdom of weeds.

Exponential growth gives people two basic choices: act early or be overwhelmed. It then follows its own logic: things will initially get worse even when good actions are taken before they improve. 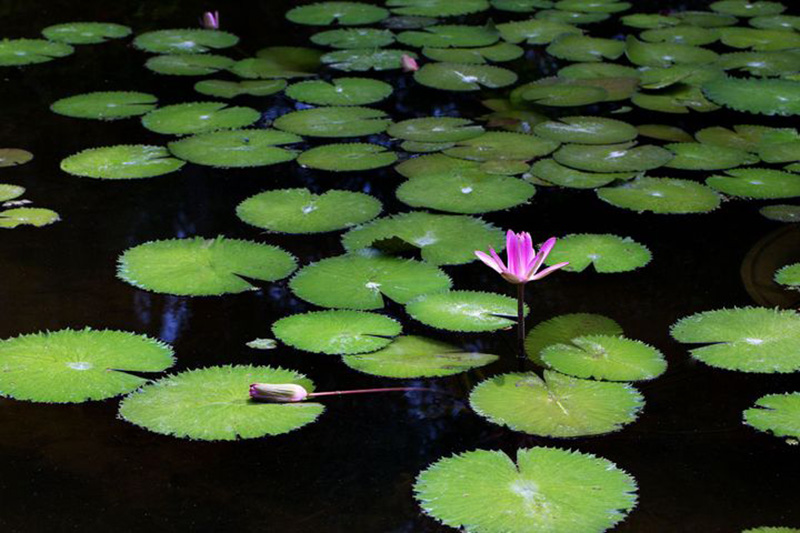 A classic example of how exponential growth sneaks up on us, then explodes, is how lily pads, doubling every day, ever-accelerate in covering a pond. It’s explained in this video at 2:33.

But the good news is this: small interventions (such as wearing a mask) can often have a much larger effect than we can imagine. When we take action to reduce the rate by which the virus multiplies, we put the brakes on exponential growth.

(If you are warming to this topic and want to invest eight minutes in watching a video that explains how to head off exponential growth of COVID-19, click here. It includes the classic example of how lily pads cover a pond by reproducing once a day. On day two, you have two lily pads. On day four, you have eight. If it takes 60 days to cover the pond completely, on what day will just one per cent of the pond be covered? Day 54. Even five days later, with just one day to go, the pond is just half-covered. Then on the final day the pond becomes completely choked. Gradually, and then suddenly.)

If the principle of exponential growth is so fundamental, why don’t we build it into precautionary policies? Why is it so hard for us to collectively act in our own self-interest?

In his very numerate book Growth: From Microorganisms to Megacities, Vaclav Smil partly explains why:

“Growth of individual devices or systems follows confined trajectories, but we are assured that there is no need to worry because perpetual streams of innovations initiate new ascents and keep the escalator rising. A disproportionate share of people in charge of national policies are economists, lawyers and techno-optimists who do not doubt this narrative and who rarely think about the biosphere’s indispensability for the survival of the human societies…. No government has advocated moderate, subdued economic growth as its priority.”

In his wonderful novel on friends and marriage, Crossing to Safety, Wallace Stegner offers a more literate illustration of the power of the exponential function in our everyday lives.

“You can plan all you want to. You can lie in your morning bed and fill whole notebooks with schemes and intentions. But within a single afternoon, within hours or minutes, everything you plan and everything you have fought to make yourself can be undone as a slug is undone when salt is poured on him. And right up to the moment when you find yourself dissolving into foam you can still believe you are doing fine.”

Gradually, and then suddenly.

That’s how exponential growth undoes us like a Texan at a COVID party.

PCI is the only outfit I know that is realistic about what can and cannot be done about our on-going environmental catastrophe, and the only one that acknowledges the necessity ...