Over the past two years, Extinction Rebellion (XR) emerged into the climate movement with explosive energy. Thousands of people in Europe and the United States mobilized to engage in civil disobedience to demand that our political leaders take radical action to avert climate catastrophe. Particularly in Britain, XR has catalyzed an unprecedented level of public discourse about what it really means to take the climate crisis seriously. Like any movement, countless people behind the scenes contributed to XR’s public success. But one of the key architects of Extinction Rebellion’s strategy and culture has consistently put himself right at the center of the scene. 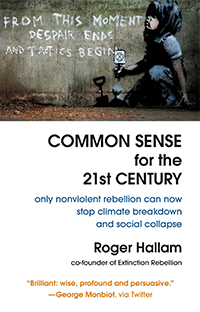 In his press release to promote a speaking tour for his new book, Common Sense for the 21st Century: Only Nonviolent Rebellion Can Now Stop Climate Breakdown and Social Collapse, Roger Hallam is described as “the world’s most controversial rebel.” Given that, it seems fair to discuss the book in the context of the controversies that surround Extinction Rebellion’s most outspoken co-founder.

Last year, the big controversy for Hallam was that he tried to relativize the Holocaust to the German press. That didn’t go over well, though it could have been a learning opportunity about how counterproductive it is to tell other countries to just get over their primary cultural trauma. Yet Hallam, who is British and whose perspective was formed in the context of the U.K., started off this year by planning a tour to “relaunch” Extinction Rebellion in the United States as XR America.

Shortly after the original XR US started here, its American organizers—rooted in the American cultural context—insisted on amending XR’s international demands by adding a fourth demand about a just transition and racial reparations. Hallam’s new XR America project scrapped that approach on the grounds that ignoring racial justice is more inclusive and “keeps things simple, preventing the over-complexity which leads to confusion, conflict, and a lack of action.”

We can only speculate about how American audiences would have responded to that message, because Hallam’s visa to the U.S. was denied and his tour never happened. Hallam is already in a conflict resolution process with the XR chapters in the U.K., Germany, and Switzerland, and XR UK came to an agreement with Hallam that he would not be speaking on behalf of the organization.

Hallam’s desire for simplicity is evident throughout Common Sense for the 21st Century in absolute assertions that erase nuance and context. He indicates that Extinction Rebellion’s moniker stems from a simple binary: “Whether or not this leads to the extinction of the human species largely depends upon whether revolutionary changes happen within our societies in the next decade.” He then conflates this extinction binary with the U.N. report on limiting climate change to 1.5°C, which makes no suggestion that missing that target would lead to human extinction. Hallam often insists that his strategy or analysis is the only possible answer, even channeling Margaret Thatcher when he asserts that “There is no alternative.” Hallam also capitalizes “Rebellion” when talking about the only viable strategy, as if XR has copyrighted the word. At his most presumptuous, he claims his capital-R brand of Rebellion is the “only one way that leads to true self-respect.”

The reality of climate change is that it’s an unthinkably complex, constantly evolving, wicked problem. To present a complex problem as simple and assert that we know what will revolutionize society undermines XR’s first demand: to tell the truth about the crisis. Between the stark binaries of revolution or extinction is the hard slog through endless struggles, surprises, and opportunities, and it is that messy path which climate activists must be prepared to walk. Hallam writes of his mass protest strategy, “After one or two weeks following this plan, historical records show that a regime is highly likely to collapse or is forced to enact major structural change. This is due to well-established dynamics of nonviolent political struggle.”

It might be easier to mobilize new activists with that kind of assertion than by inviting them to grapple with the complexity of political change. But it threatens to undermine one of the great gifts of Extinction Rebellion: the practice of extended, day-after-day disruptions. The expectation of complete success in such a short amount of time risks a campaign of sustained rebellion losing steam when participants become discouraged, particularly when the stakes of the struggle are framed as either extinction or revolution.

Hallam makes several comparisons of climate activism to movements with straightforward demands like regime change. These straightforward movements are also the basis for Erica Chenoweth’s much vaunted and misinterpreted research finding that movements with the participation of just 3.5% of a population usually succeed. But climate change advocacy is far more complex than taking down a dictator. We need to not only take down the current fossil-fuel-funded regime, but also institute scientifically literate good governance that skillfully navigates an unprecedented and complicated global crisis.

Hallam tries to invoke Thomas Paine, as in the title of his book, but we in fact need a transformation much more profound than the American Revolution, which enfranchised propertied white men but fell far short of the principle of equality for all. Hallam’s solution is to replace the government with citizen assemblies, selected at random from the population, that will institute and manage the rapid transition we need. At the same time, he suggests that almost everyone in our society is uninformed and in some type of denial about the extent of the climate crisis, so the basis for his confidence in randomly chosen citizens is unclear.

In addition to the general plan for citizen assemblies, Hallam offers a wide range of decent, specific ideas for the great transition. They’re all worth trying. But they should be tried with flexibility and adaptability to local context. We should vigorously avoid the trap of a fundamentalist attachment to a definitive revolutionary agenda.

I know from my own experience as a climate activist that the lure of absolutism is strong, and it is often what an audience demands. Frankly, much of what Hallam writes feels to me like something I might have written if I didn’t have self-restraint and a community of accountability which demanded I consider things from other people’s perspectives. But restraining ourselves from the allure of certainty is a key difference between healthy leadership and toxic heroism. In his insightful work on the terror of mortality and hero transference, cultural anthropologist Ernest Becker warns that absolutism is critical to maintaining the role of hero: “One cannot be a functioning prophet with a message that he half takes back, especially if he needs paying customers or devoted admirers.” In contrast, in her writing on social change, Susanne Moser identifies “growing the ability to hold paradoxes” as one of the key demands for climate leadership in this time.

Hallam shows his strongest leadership when he is least certain. While telling the truth about climate change is often presented as a simple step, he writes, “However, ‘knowing’ is not a binary concept when it comes to grief-inducing catastrophic information. You think you know it but then you realise you haven’t processed it emotionally. You think you have processed it emotionally but then you realise that you haven’t done it sufficiently.” This is a crucial perspective that has led many XR chapters to incorporate healthy grief practices and emotional support into their work. Hallam also understands the role of “glorious failure” for imagining other futures when he writes, “If failure enables previously unspoken possibilities and realities to be discussed, then we have not failed. In fact, we have made a critical contribution to the transformational changes that now have to happen.”

We’ve already seen transformational changes since Hallam wrote Common Sense, but not in the way that he anticipated. As I write this, much of the U.S. economy has been shut down in response to COVID-19, and a significant portion of Americans are under governmental orders to stay in our homes and avoid travel. The Overton Window of what is an acceptable response to mitigate a public health threat has just dramatically shifted. What would have been considered an absurdly radical response to the climate threat is now actually being practiced in response to the coronavirus. As we find ourselves with a set of challenges and opportunities wildly different than what any of us could have predicted, common sense demands that the climate movement be as adaptable, humble, and intersectional as it is rebellious.