Behind the protests over police violence are the painful racial disparities in the COVID-19 pandemic. And behind those health disparities is the persistent and glaring racial wealth divide that has weakened the body politic.

The racial wealth divide is where the past shows up in the present. The glaring gap in wealth reflects the multigenerational history of white supremacy in the United States and the systematic denial of wealth-building opportunities to Black people. Chattel slavery, Jim Crow, segregation, and predatory loans are reflected in the wide disparities in bank accounts, homeownership, financial wealth, and overall well-being between white people and Black and Latino people in the United States.

In our new report, White Supremacy is the Pre-existing Condition, we found that the concentration of wealth has surged during the pandemic, further exacerbating an already extreme racial wealth divide.

What does that look like? In the 12 weeks since people in the U.S. began sheltering in place, U.S. billionaire wealth increased by more than $637 billion – the equivalent of 13 percent of all the wealth held by the nation’s 41 million Black people.

U.S. billionaires altogether have $3.581 trillion in wealth. That amount is 76 percent of the $4.68 trillion of cumulative Black wealth, and exceeds the $3.49 trillion of total Latino wealth in the U.S.

The corrective to the racial wealth divide must come through structural change, not the actions of individuals. The policies aimed at recovery from the 2009 recession only worsened the racial wealth divide. Congress shuffled money to the large corporations and firms represented by white executives and shareholders, all while leaving the distressed homeowners, predominately Black and Latino, with little support. In fact, the bailout privileged some of the same firms that targeted subprime lending towards Black people.

We cannot repeat these same mistakes. In our report, we highlight eight potential solutions that can make real progress in bridging the divide.

First, there are the emergency measures that can be enacted now, in the midst of the pandemic: 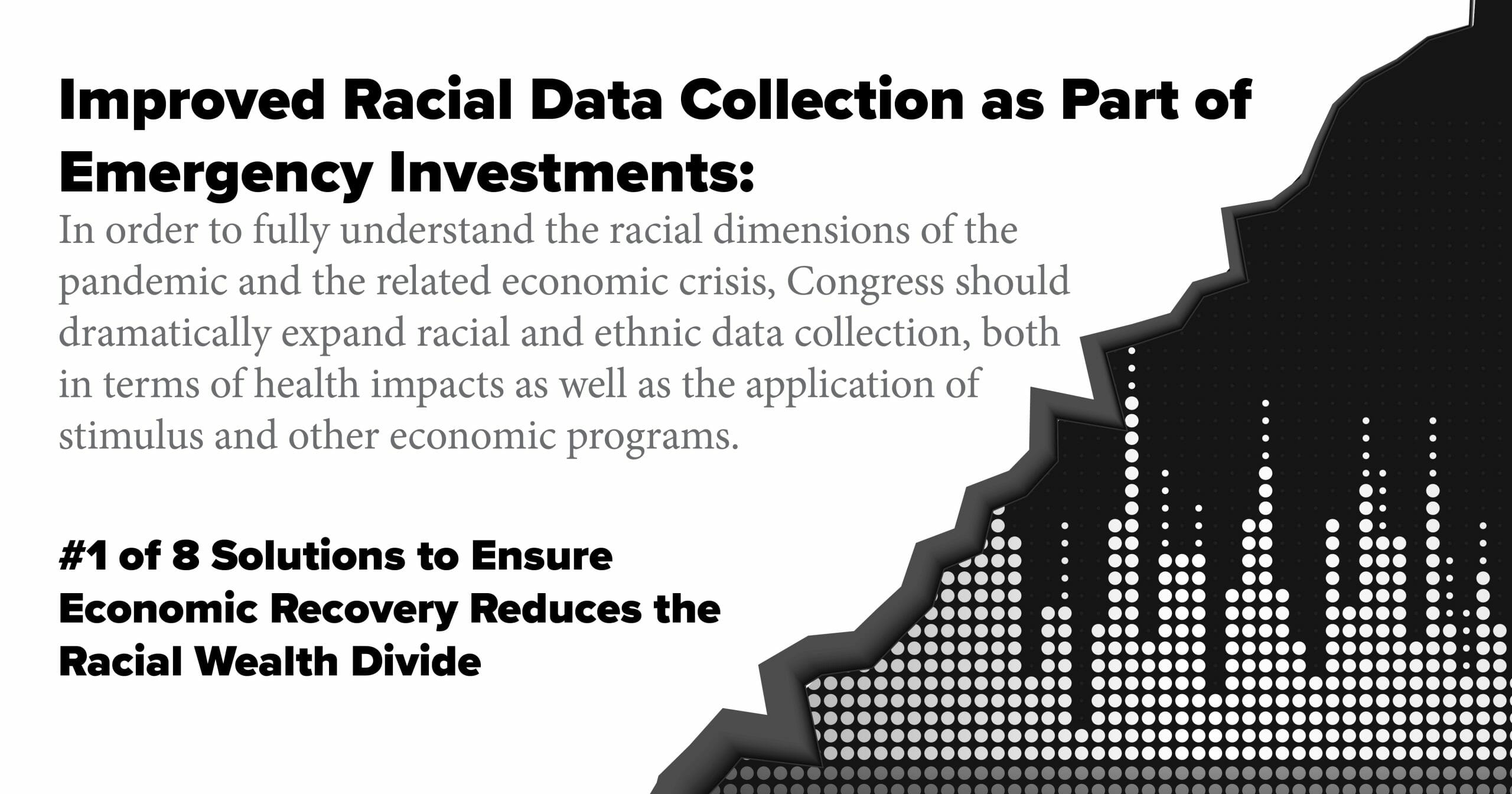 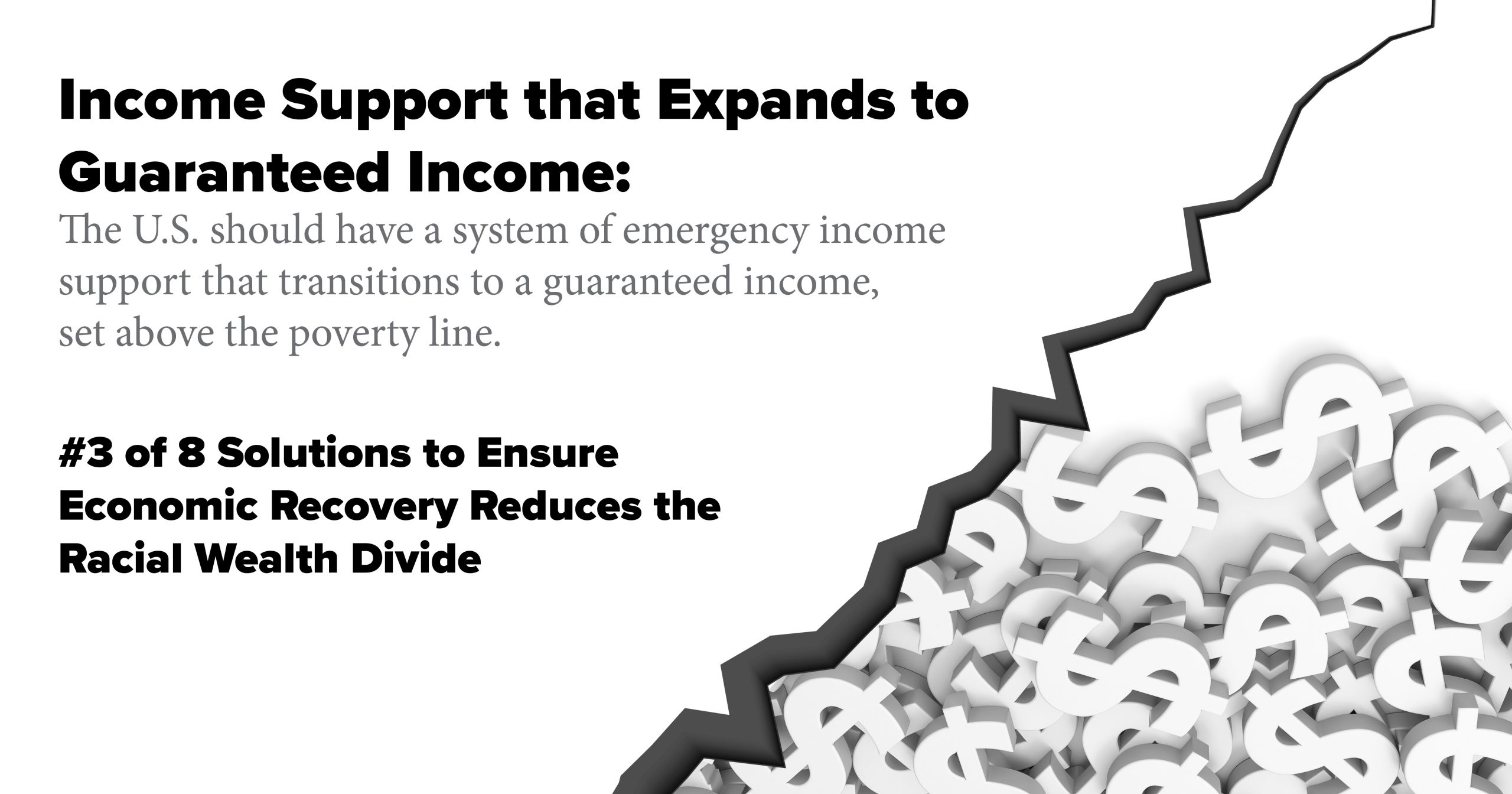 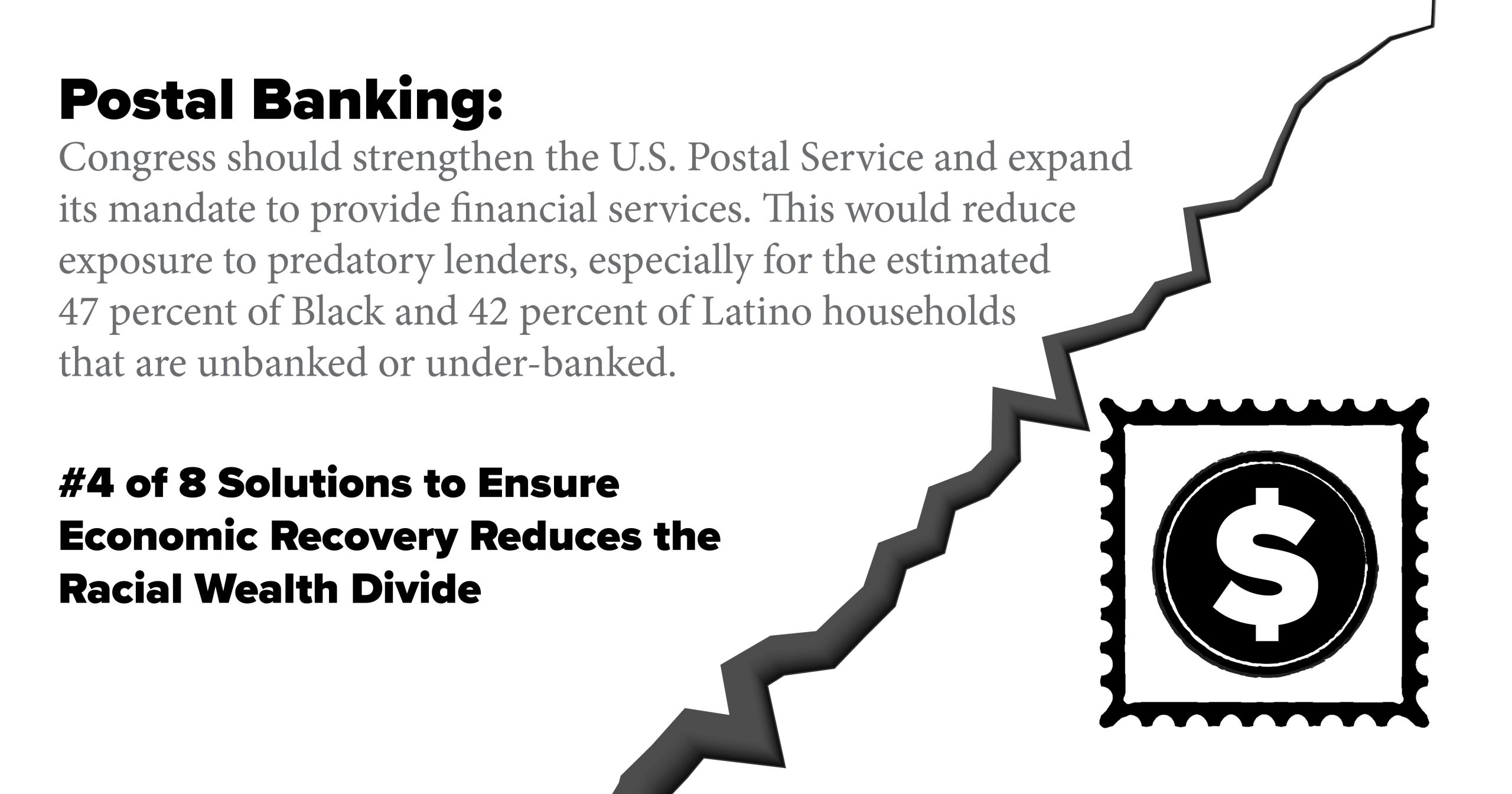 We have also outlined a series of solutions to undertake as the country emerges from this recession. 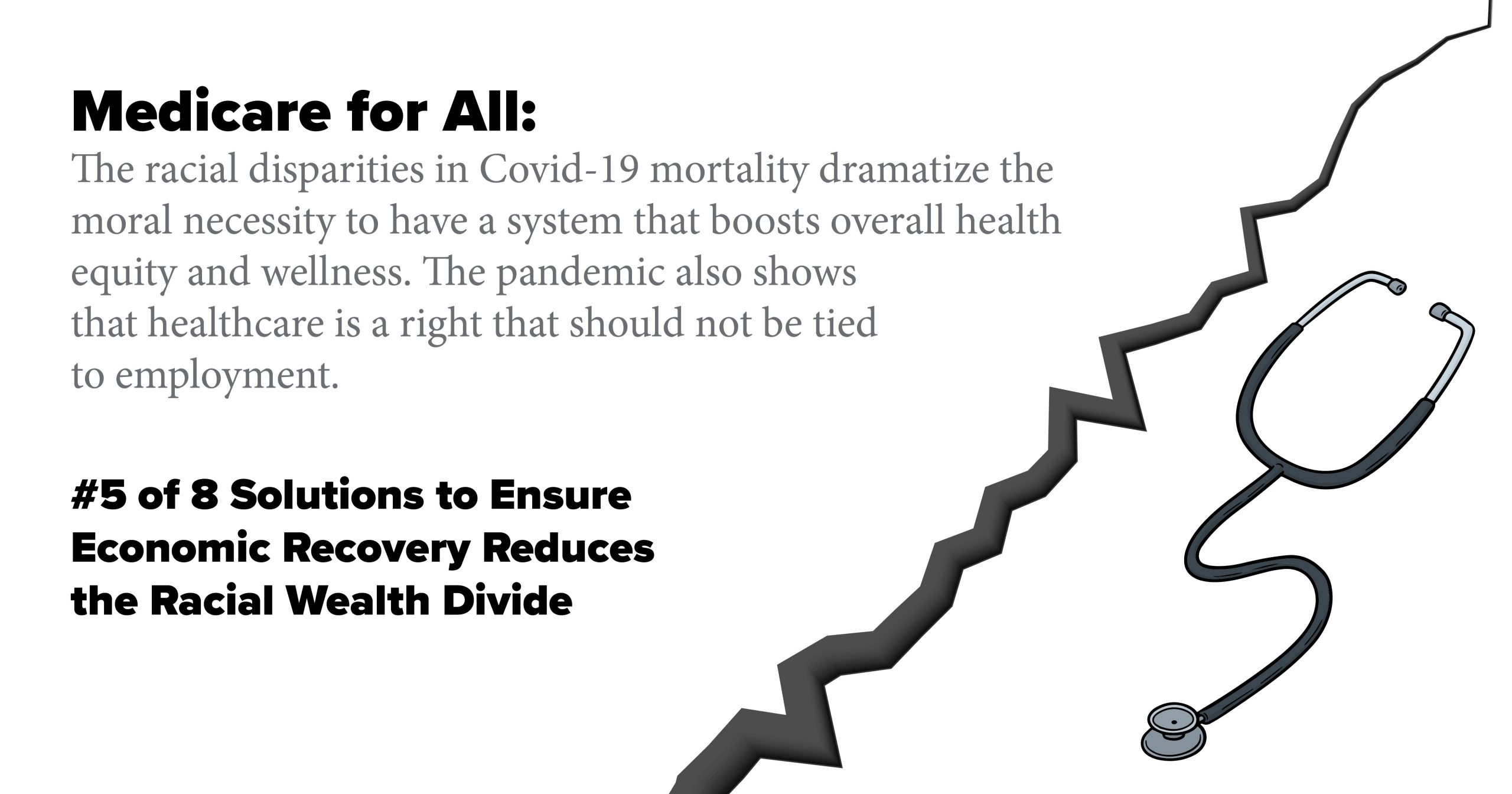 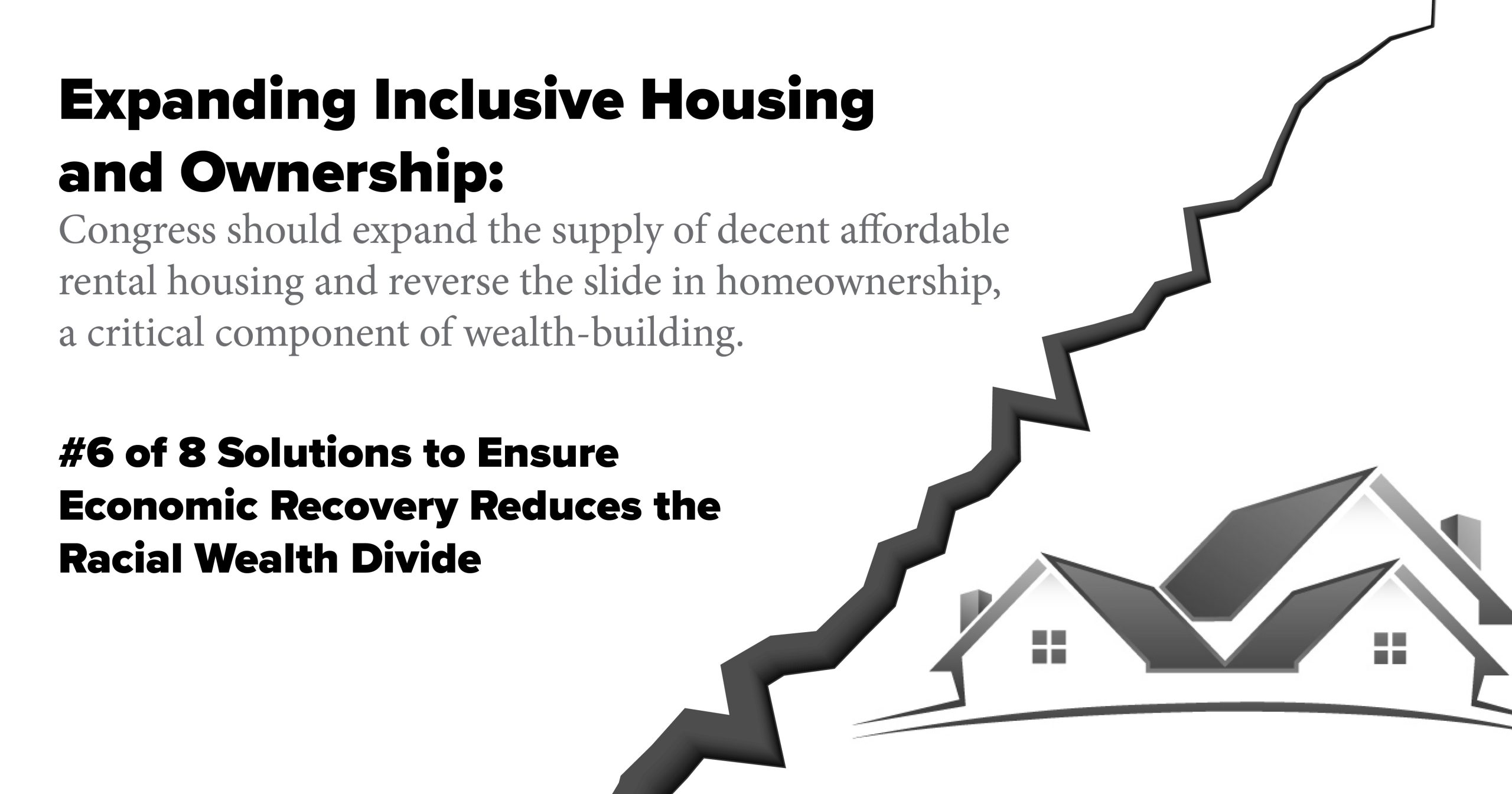 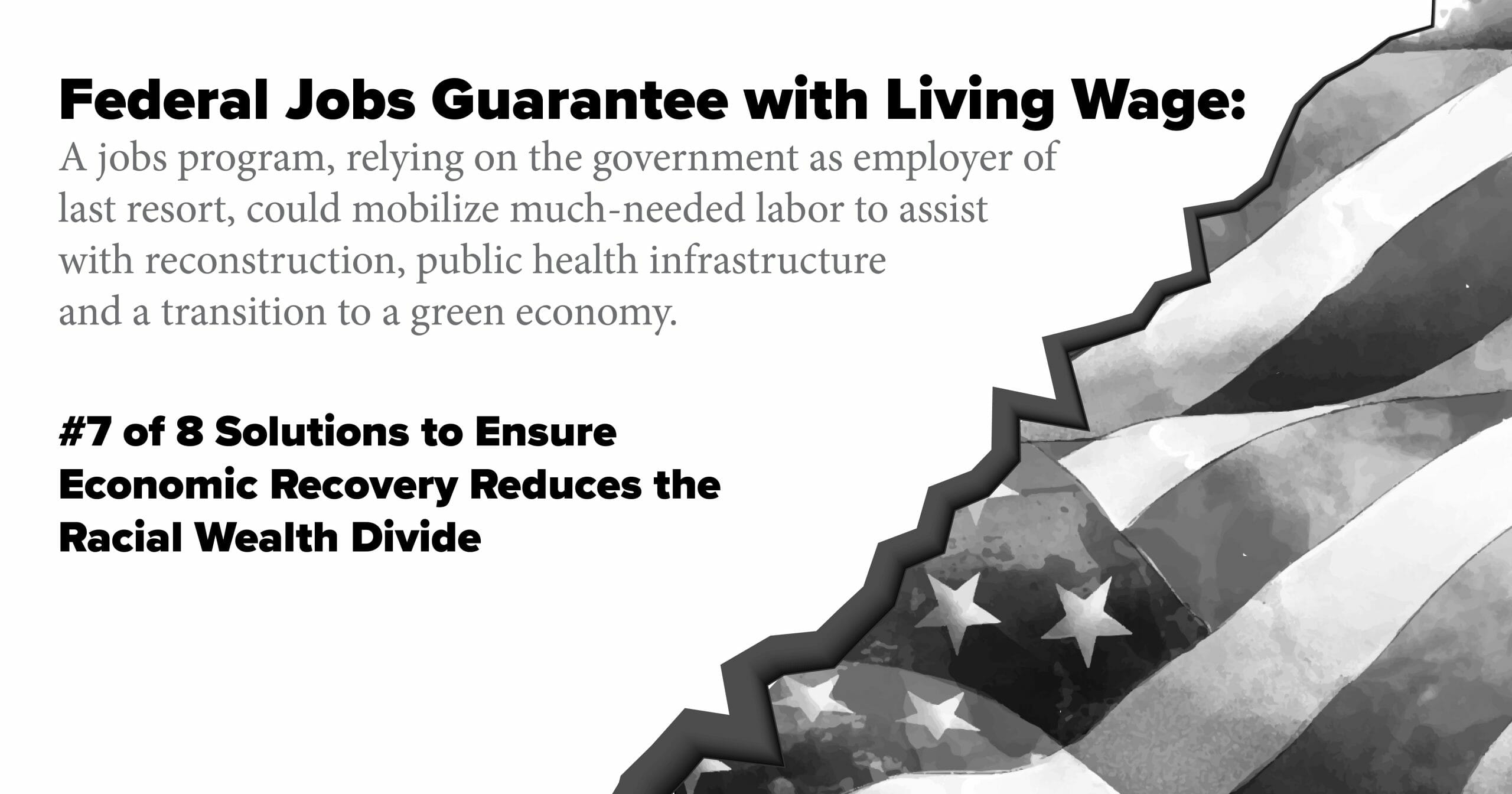 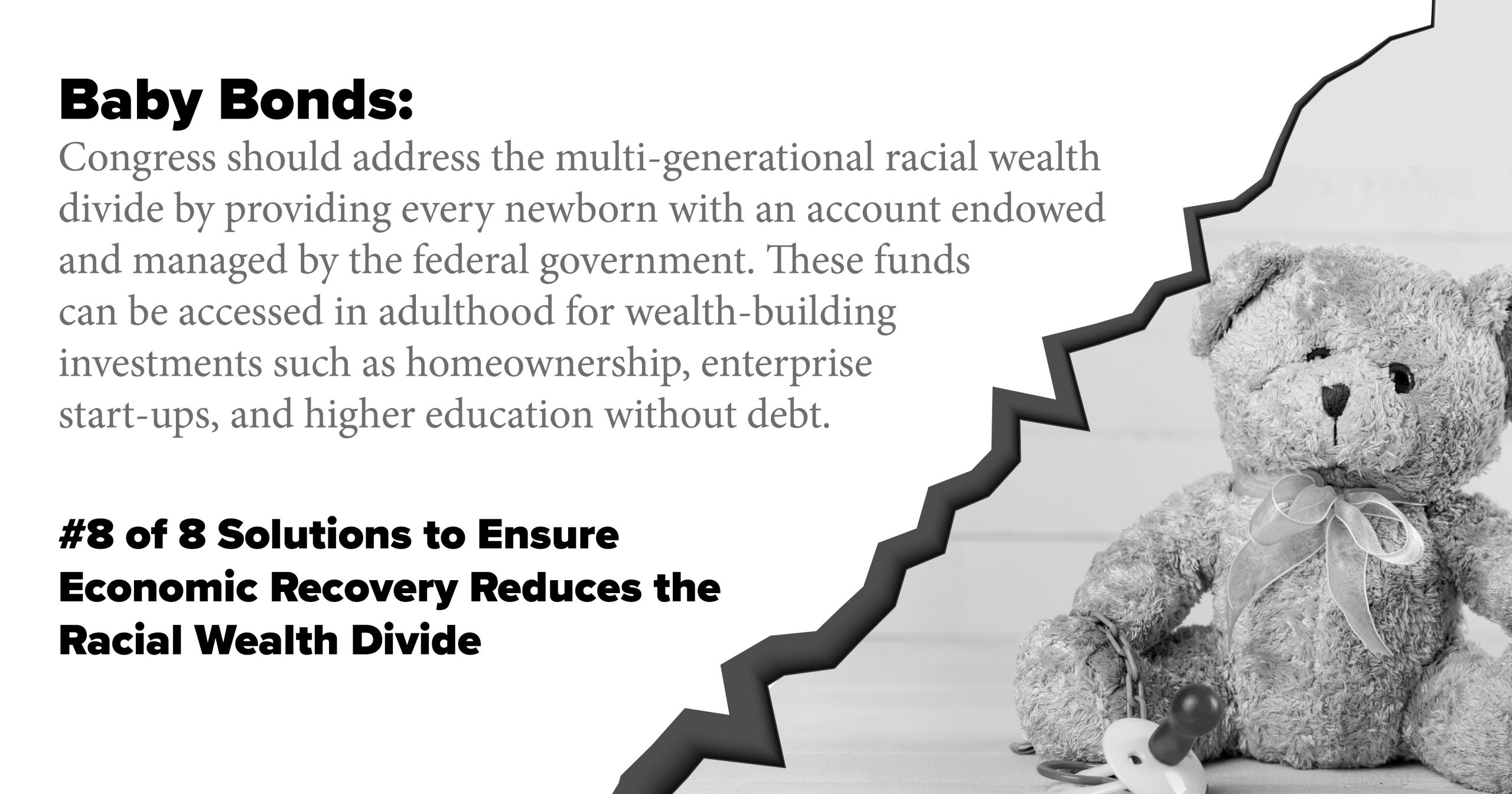 These eight solutions could dramatically decrease racial wealth gaps, and Congress shouldn’t wait until they’ve raised revenue to implement this new social contract. They should, however, tackle the roots of wealth concentration that supercharge the racial wealth divide. To do this, Congress must reverse the upside down tax subsidies that mostly flow to the wealthiest households, and redirect those funds to communities that have historically been excluded from wealth-building government programs.

Congress must also issue a host of new progressive tax programs. Some examples include a millionaire surtax on incomes over $2 million, a financial transaction tax on trades of stocks and derivatives, and an annual wealth tax. Estate tax reforms to boost rates on billionaire inheritances, as well as plugging loopholes, can also help diminish wealth dynasties. Additionally, Congress must use all the tools at its disposal to shut down the hidden wealth system that protects an estimated $21 trillion from tax enforcement.