Because of how badly we humans have treated soils and animals and how we destroyed bio-diversity, it is understandable that people are looking for other ways of producing food.  The food tech sector hosts legions of entrepreneurs (mostly with background in the IT sector) seeking venture capital and researchers looking for grants to “disrupt” a sector which they claim is archaic. Most of them are based on the view that farming in general, and livestock farming in particular, is inefficient and wasteful. The environmental journalist George Monbiot writes in an article in the Guardian titled Lab-grown food will soon destroy farming – and save the planet.

“Eating is now a moral minefield, as almost everything we put in our mouths – from beef to avocados, cheese to chocolate, almonds to tortilla chips, salmon to peanut butter – has an insupportable environmental cost. But just as hope appeared to be evaporating, the new technologies I call farmfree food create astonishing possibilities to save both people and planet. Farmfree food will allow us to hand back vast areas of land and sea to nature, permitting rewilding and carbon drawdown on a massive scale.“

One of the promising initiatives mentioned in the article is the Finnish company, Solar foods. It claims that it has found a way to commercially produce hydrogen oxidized bacterial protein from electricity. The technology is actually known since the 1960s and has not taken off because of the prohibitive costs. In a research article, co-written by the founders of Solar Foods as late as 2019, it is concluded, that only the cost of energy required to produce microbial protein is higher than the price of soybeans, even if capital and other operational costs are not taken into account. The production of 1 kg of microbial biomass would require 10 kWh of electricity. On an energy basis it will require five times as much energy to produce the bacterial biomass than is contained in the product. The electricity needed to feed the world with this kind of product would be more than the total electricity production in the world according to my calculations. 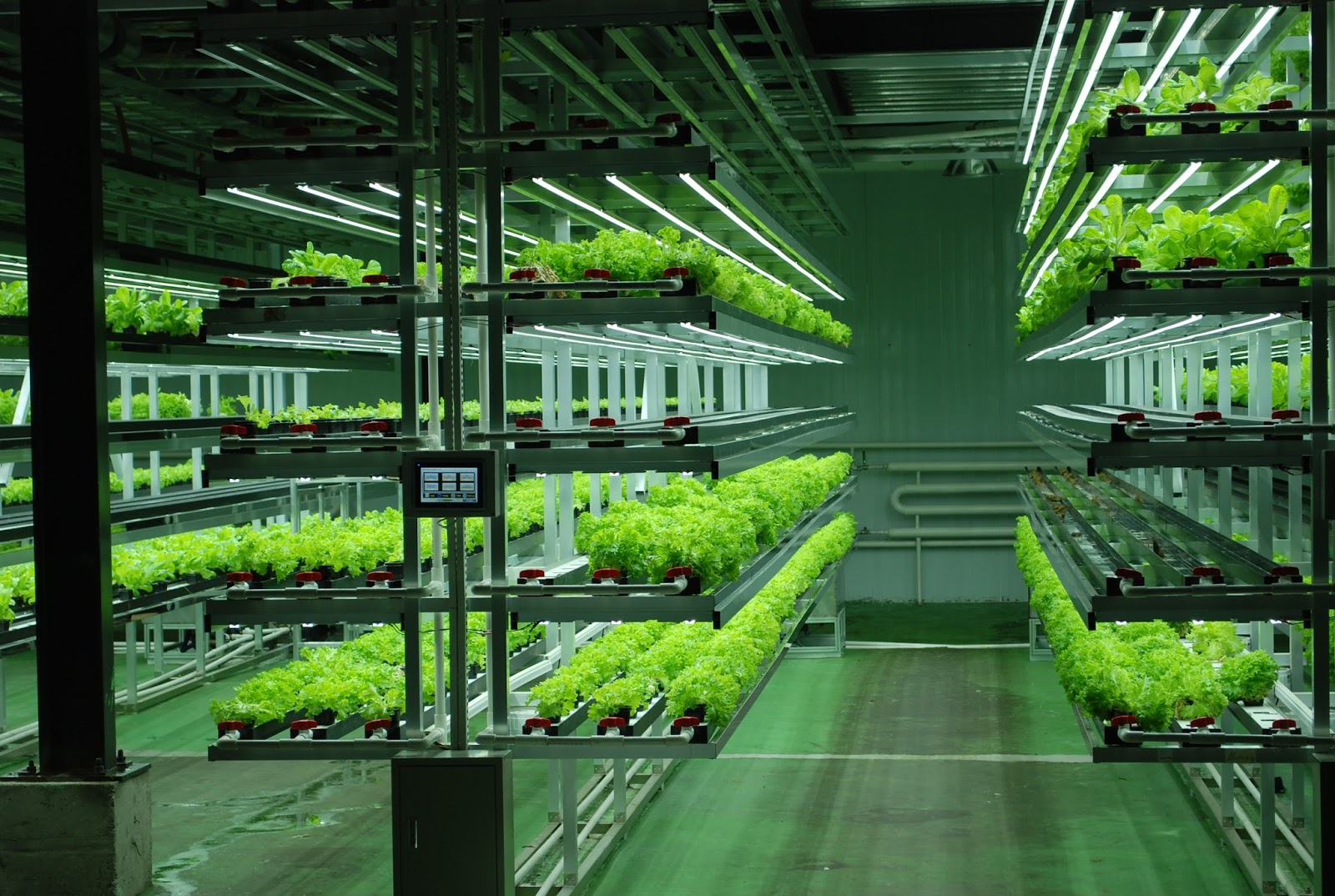 Another modern technology promising to feed the world with low environmental impact is indoor vertical hydroponic farms in urban areas. It is possible to produce lettuce in high towers with automated systems. But the fact that it is possible doesn’t mean it is viable on a larger scale, and even less that it will take place in the cities. It can be an interesting architectural and engineering challenge to construct green high rises. It can increase the commercial value of the property to have an indoor farm in the basement and it can of course be a marketing gimmick for a supermarket to grow its own lettuce in a green dome inside the shop. But it has little relevance for feeding the population. This  is also demonstrated by that the commercial application are all about growing lettuce, basil, pak choy or herbs, crops which provide almost no food energy or proteins. The real pioneer of indoor farming was clandestine marihuana growing. Where marihuana is legalized, the production moves into the natural light instead.

The claims of environmental benefits of bacterial protein and indoor farms are not backed by facts. The main reason is the energy, water and land nexus. In-door production of lettuce requires in the range of 2000 kWh per square meter growing area (more is required for the production of tomatoes or potatoes). Only 1.5 square meter per capita of such production would consume the total global production of electricity, which in itself shows how absurd the idea is that it could “feed the world”. While water and land are possibly “saved” at the site of production, the land and water footprint of energy production is huge. Exactly how big varies considerably between the various forms of energy and how you calculate.

If an indoor farm would be powered by solar energy, at least an area ten times larger than each layer of cultivation would be needed for the solar panels. And this is only for the light. In addition to light one needs energy for ventilation, cooling, water pumping and purification etc. The land use for other energy forms can be bigger or smaller than for solar panels, but in any case the land use is substantial.

The claims of saving water are dubious to say the least. Indoor vertical farms use municipal water which is very clean and very resource demanding. One can’t compare that water to rain falling on a field which proponents of indoor farming do when they talk about how much water is saved. Energy production also requires a lot of water, varying depending on energy source and system boundaries. If one include cooling water for nuclear power and the water in dams for hydroelectricity they use very high amounts of water, otherwise little. With an average water footprint of 20 litre per kWh, the use of water for one single pot of 40 gram of basil grown in an indoor farm in Sweden increases from 2.5 litre to 30 litres.

For lab meat, there is no commercial production and there are only theoretical comparisons with real meat. Still, the environmental impact of fake meat might be in a range close to that of real meat.

The messages of the techno-optimists are both deceptive and dangerous as it makes people believe that most problems can be solved by technological innovation which in turn draws attention and resources away from other solutions. While technological development can be useful, by and large we already have the technologies needed to feed the world’s population with healthy food in a sustainable way. The challenges are mainly social, economic and political. For example, a fair distribution of food would eradicate hunger and eating of local, unprocessed organic foods would considerably reduce obesity and malnutrition.

The notion that we best protect the wild by letting it be is mistaken. For sure, there are places which could benefit from the total exclusion of humans but by and large, nature conservation is much more successful when it is managed by local people. In a capitalist economy, it is also naïve  to believe that land that is “saved” by migrating food production into factories in some magical way would be restored to pristine nature. The arable land that has been abandoned as a result of productivity gains in my native Sweden has mostly been converted into monoculture forest plantations. Ninety percent of our semi-natural grasslands have to a large extent been converted from very rich biodiverse areas to monoculture forests. Also this development was caused by productivity gains in arable farming making it more economic to feed cattle and sheep with crops than letting them graze.

In a panel recently (Youtube video), in which I also participated, George Monbiot had adjusted his arguments around farm free foods as being mainly a kind of insurance against an anticipated collapse of food production in the light of the climate crisis. While I totally agree that humanity needs to do whatever it can to reduce greenhouse gas emissions, I don’t think that the “looming food crisis narrative” serves us. It was exactly that narrative that initiated the Green Revolution with all its negative side effects. It is also that narrative which is used by proponents of GMOs, the pesticide industry and all others promoting “more of the same”. I believe the perspectives of Julia Lernoud, Hindou Oumarou Ibrahim and myself with an emphasis on local food landscapes, food sovereignty, consumer-producer direct cooperation, and ecological adaptation are more relevant. The corona crisis also demonstrates that such systems are resilient alternatives to a global food system. A diverse localized food production system will also be much better suited to adapt to climate change.

Farm free foods and food tech can also be seen as an expression of a desire to decouple human development from nature. Even if we could fulfill the food tech dream to free us from the limits of nature, it would leave us empty, free from meaning. Instead of de-coupling human civilization from nature, we need to live in and by nature. We are fooling ourselves and betray the rest of the living by pretending we are a species that doesn’t need the rest of the living – after all we are nature.