WASHINGTON, D.C. – The Creature from the Black Lagoon loomed over the offices of the Interior Department last week as non-profit consumer advocate Public Citizen joined the chorus of voices condemning the proposed rollback of the bedrock National Environmental Policy Act, or NEPA.

“Trump’s Interior Secretary is an Oil Lobbyist,” declared the giant video screen outside Interior headquarters throughout the last day of only two hearings that the EPA provided nationwide on the proposed NEPA rollback. It depicted Interior Secretary David Bernhardt, who has close ties to the fossil fuel industry, as a monster from the “swamp of lobbyists and corporate cronies that President Donald Trump derided as a candidate but now embraces wholeheartedly.”

Bernhardt is in charge of the Bureau of Indian Affairs as well as all public lands overseen by the U.S. Forest Service and Bureau of Land Management, agencies where community members currently have opportunities to give input on environmental impact statements — a guarantee of citizen involvement that the White House aims to curtail.

The other hearing, held in Denver, Colo. on Feb. 11, drew a rally of indigenous leaders and others who raised their voices against the rollback of guarantees for public participation in environmental decision making.

Coming from rural communities throughout the West, they rallied to an urban backdrop of street music, sirens and jackhammer sounds in the snow and ice outside of EPA Region 8 headquarters. 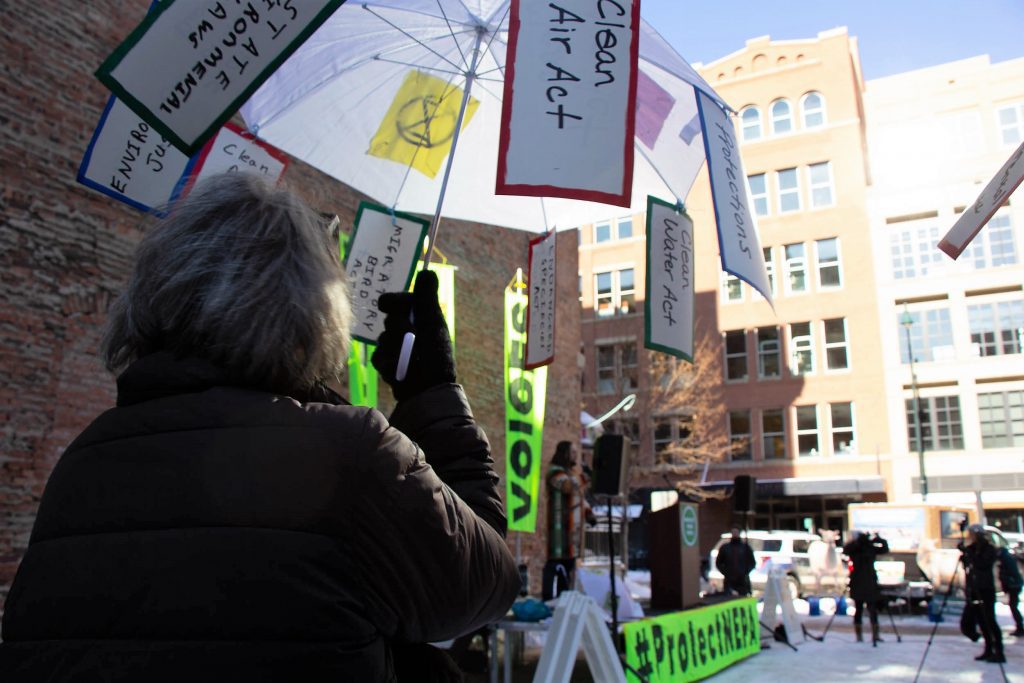 Indigenous leaders and others raised their voices against the rollback of guarantees for public participation in environmental decision making at a rally outside EPA offices in Denver. Courtesy / Angel Amaya for Western Organization of Resource Councils

Testifying inside, they told the White House Council on Environmental Quality to abandon recent proposals that would reduce public comment opportunities and would curb consideration of projects’ cumulative impacts in regulatory rulings pursuant to the bedrock National Environmental Policy Act.

“We need to protect every voice, even the saguaro cactus,” said Juan Mancias, chairman of the Esto’k Gna or Carrizo Comecrudo Tribe, who traveled to Denver from his native Lower Rio Grande Valley to speak against the NEPA revisions. “It affects who we are. We are the original people of the land and we’re having to fight.”

Mancias spoke from painful personal experience, coming from the long fight to protect his and other tribes’ sacred sites from the border wall. That wall, he explained, is slated for construction three miles from the U.S.-Mexico border, which would permit liquefied natural gas facilities, pipelines and other private projects behind the wall to be exempt from standard oversight while occupying ancestral lands.

The tribe has sued the federal government for the Administration’s two-year-old waiver of that oversight. The waiver is one of at least 28 that have the Trump Administration has employed to push a wall through despite numerous laws, such as the Native American Graves Protection and Repatriation Act, the Endangered Species Act, and the Safe Drinking Water Act, which were waived as part of the approval process. 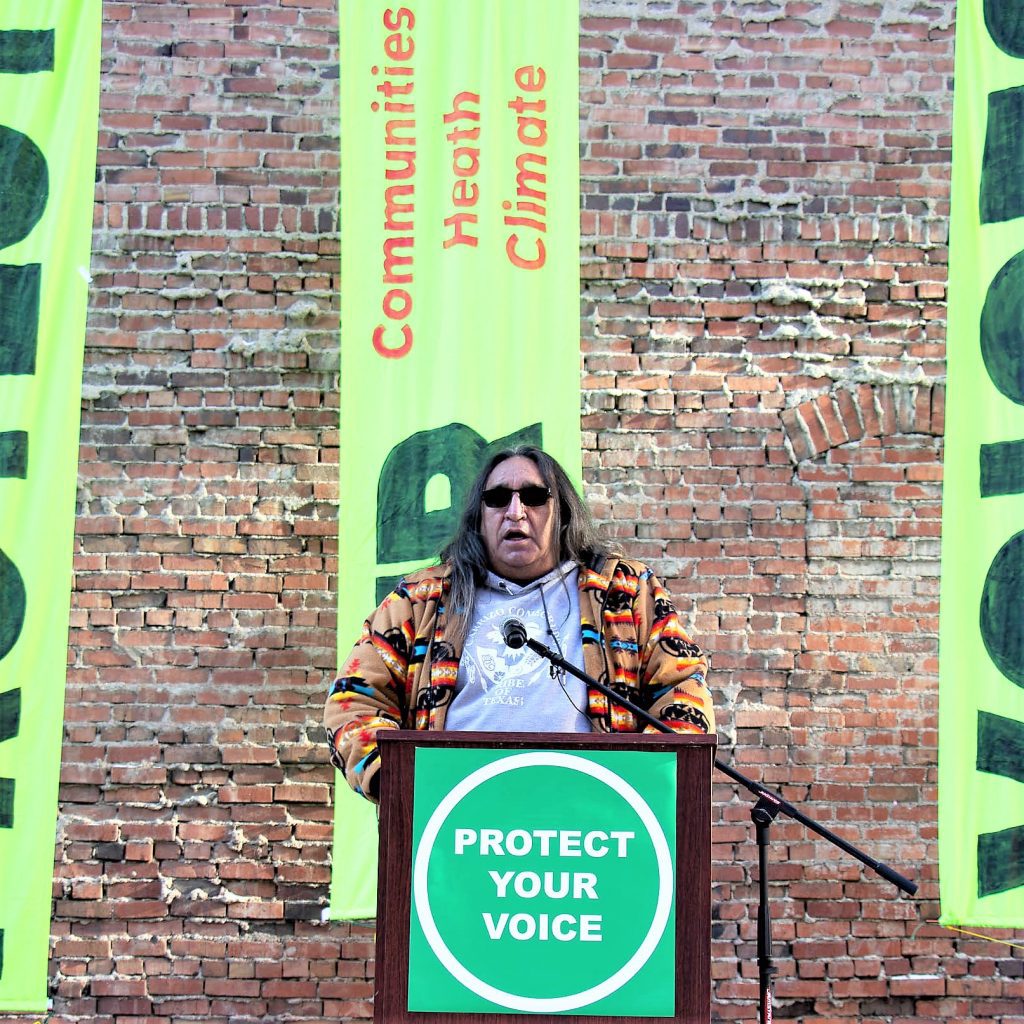 Juan Mancias, chairman of the Carrizo Comecrudo Tribe: “We are the original people of the land and we’re having to fight.” Courtesy / Angel Amaya for Western Organization of Resource Councils

The Council on Environmental Quality, an executive agency that works directly under the direction of Trump, claims it needs to “modernize” and “update” regulations to “facilitate more efficient, effective, and timely NEPA reviews by simplifying and clarifying regulatory requirements.” It is designed to “reduce unnecessary paperwork and delays, and to promote better decision-making,” it says of its notice of proposed rulemaking in the Federal Register on Jan. 10

The agency is responding to Trump’s 2017 Executive Order 13807 establishing a “One Federal Decision” policy, including a two-year goal for completing environmental reviews for major infrastructure projects.

“The increased costs and complexity of NEPA reviews and litigation make it very challenging for large and small businesses to plan, finance, and build projects in the United States,” the council says in a fact sheet.

However, the rules also apply to reviews of government projects, notes Lisa DeVille, who testified about the proposal on behalf of Ft. Berthold POWER (Protectors of Water and Earth Rights), from Mandaree, North Dakota.

“For tribal communities like Fort Berthold, which bear the brunt of health problems such as heart disease and asthma from the poorly planned federal projects, NEPA isn’t just an environmental protection law, it’s a critical tool for ensuring our voice. We cannot afford to lose it,” said DeVille, a tribal member of the Mandan Hidatsa & Arikara Nation.

“Any law that provides broad opportunities for public participation in government decisions that affect the environment and local communities shouldn’t be rolled back; rather, laws like NEPA should be embraced and strengthened,” she said. “NEPA is one of the only avenues for tribal members to have any input on federal actions.”

According to the American Bird Conservancy, “These revisions would significantly curtail scientific assessment and review of environmental impacts of federal projects. Additionally, these changes would eliminate important public comment provisions. It’s critical that the public be afforded the opportunity to comment on projects that affect birds, like the Bald Eagle and the habitat they depend on.”

Navajo communities facing fracking in the Greater Chaco Region are the reason Navajo Nation Council Delegate Daniel Tso sent a representative to speak at the Denver rally. The Bureau of Land Management has approved more than 400 new fracking wells without adequate tribal consultation or protections for cultural heritage, community health, water and climate impacts, according to opponents.

“Communities have consistently cited the need for more NEPA review,” he said, adding that government-to-government consultation between the Administration and tribes should take place prior to NEPA changes. 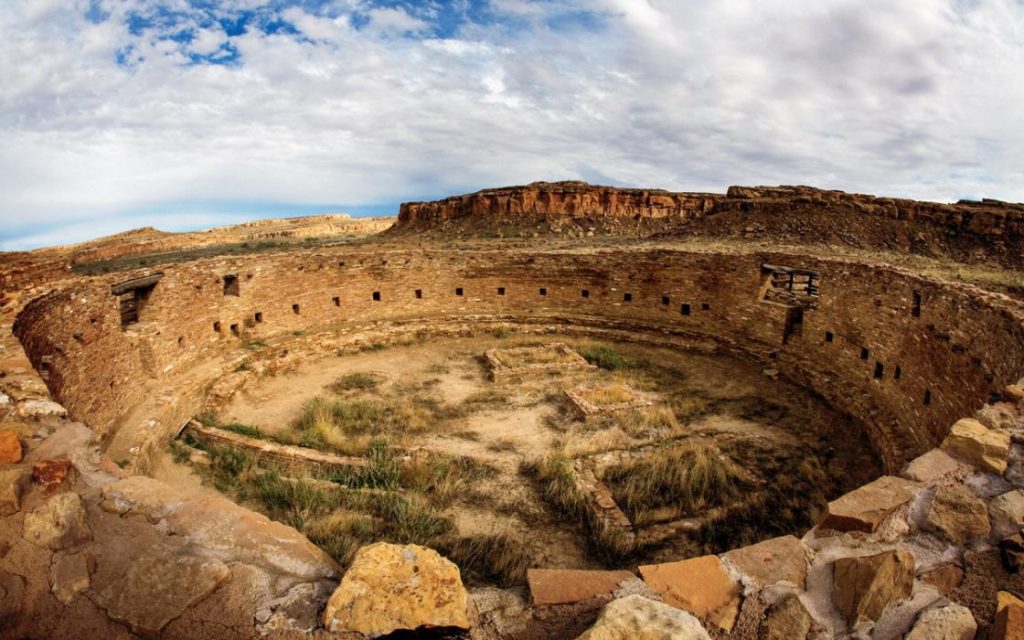 The majority of the greater Chaco Canyon area has been leased for oil and gas development by the federal government. Chaco Canyon is considered a sacred place to Pueblo and Navajo communities.Photo: Sierra Club

A May 2019 Tenth Circuit Court ruling held that BLM failed to analyze the cumulative water impacts of fracking in the Greater Chaco Region, a win for Navajo chapters in the impacted area. However, the requirement to do so would be nullified if NEPA regulations change as proposed, he said. “You win, but then they do this to get around it,” he concluded.

San Felipe Indian Pueblo Council Member Tyrone Ortiz, who travelled from New Mexico to the rally, said the pueblo opposes changes to NEPA and weakening protection for the environment. He called for more public hearings.

“Currently the Administration is attacking us all to benefit industry,” he said. NEPa “exists to give the public time to consider and comment. These two public hearings are not enough.”

Ortiz exalted in the Denver snowfall and continued, “We must consider our actions on this Earth. Once we get together, we can assure that our future generations will be able to see what we see.”

Yvette Arellano, Texas Environmental Justice Advocacy Services senior policy analyst, who moderated the rally, called the proposed rule changes “radical” and “drastic.” She said they respond to the needs of special interests, such as the American Petroleum Institute, which “are literally spending millions of dollars” to “severely restrict public input.”

A Public Citizen analysis released in January found that 17 former lobbying and legal clients of Bernhardt have spent nearly $30 million lobbying the federal government since the start of the Trump Administration.

“The extremely close ties between private-sector lobbying interests and the Trump Administration are bearing fruit for those industries that want to exploit public lands,” said Alan Zibel, research director of Public Citizen’s Corporate Presidency Project. “Industry groups that came into the Trump Administration with a lengthy wish list can now check off just about everything they desired.”

Trump’s proposal to gut NEPA would allow fossil fuel projects to proceed untrammeled, ignoring the true long-term environmental costs to the climate and to the planet, according to Public Citizen.