Gaby Zavala was in her obstetrician’s waiting room in Brownsville, Texas, when she first saw the video. Across the river in Matamoros, Mexico, a 15-year-old Honduran girl had been swept away by the current as she bathed in the Rio Grande. While an asylum-seeker filmed the September incident, two others pulled her from the water, trying—and failing—to resuscitate her.

An ambulance arrived just in time to save the girl, one of about 2,500 women, men, and children living in a makeshift tent camp on the banks of the Rio Grande. Stranded in this high-risk cartel zone under the Trump administration’s “Remain in Mexico” policy, people are waiting months for their asylum hearings.

“Watching them trying to resuscitate her was heartbreaking,” says Zavala, who at the time was pregnant with her second child. “They didn’t know what to do, so they were just standing there. It just broke my heart — it felt like a group of abandoned people trying to help a member of their community.”

Zavala, who was born in Brownsville and grew up on both sides of the river, was moved to action. “That’s when we said, ‘No más —This can’t happen again,’” she says.

Within two days, she and a team of volunteers had raised enough money to set up basic bucket-bathing shelters and bring in a truck of water so that people could safely bathe. Within a month, she had put down a deposit on a house across the street from the encampment and opened the Resource Center for Asylum Seekers. 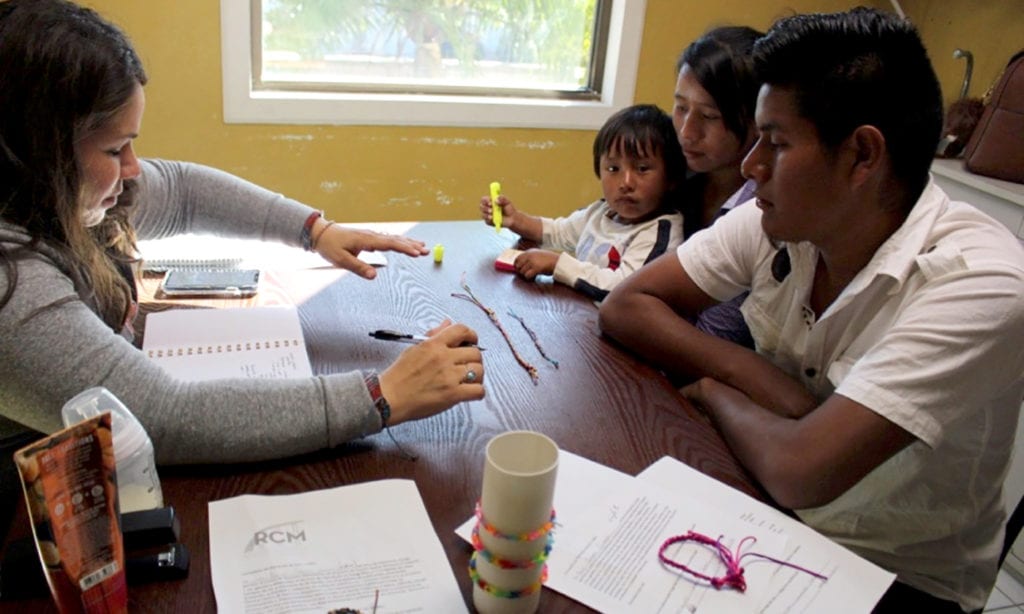 Gaby Zavala, in her office at the resource center, attends to a family from Chiapas who has made bracelets to be sold online to help them sustain themselves during their wait for asylum.

The two-story house would serve as the Mexico counterpart to a center she had operated in Brownsville as the migrant caravans brought tens of thousands to the border last year. The center has become a hub for social service providers, attorneys, health care workers and other volunteers – many of them, like Zavala, crossing the border from the U.S. and filling a need that governments and international NGOs have avoided.

Additionally, Zavala coordinates a team of about 20 asylum-seekers who manage basic camp needs, giving them a small stipend and a job reference. The team, for example, manages the “Aqua Blocks” that filter water from the Rio Grande and operate free stores from tents in four areas of the camp.

In July, when the Trump administration’s so-called Migrant Protection Protocols went into effect in Brownsville, hundreds of asylum-seekers were returned to Mexico to fend for themselves in Matamoros, which the U.S. State Department classifies as Level 4, “Do Not Travel.”

No security exists for the tent camp, and response from the Mexican government has been minimal. Major international aid organizations have steered clear. Kidnappings, extortion, and sexual assaults are routine.

A similar scenario is unfolding all along the border, from Matamoros to Tijuana, where an estimated 60,000 asylum-seekers have now been waiting months for their hearings.

Zavala was among the first responders to the camps, walking through with a clipboard resting on her pregnant belly. When the baby came later in September, Zavala barely missed a beat, working from her car with little Scarlet in a carrier at her side.

“I realized a lot of their issues were much more deeply rooted than just needing basic supplies,” she says. “I gained their confidence, and I started to see that they were being extorted, that they were being victims of organized crime while waiting in Matamoros. There were things like sexual coercion and kidnapping, and other things that were very frightening.”

The first days of the New Year found Brendon Tucker, a volunteer from Texas and Zavala’s right-hand man who does engineering work around the camp, building a set of shelves for the new camp pharmacy. The pharmacy is in the mobile clinic of Global Response Management, another grassroots organization that provides lifesaving emergency medicine in high-risk areas such as this one. 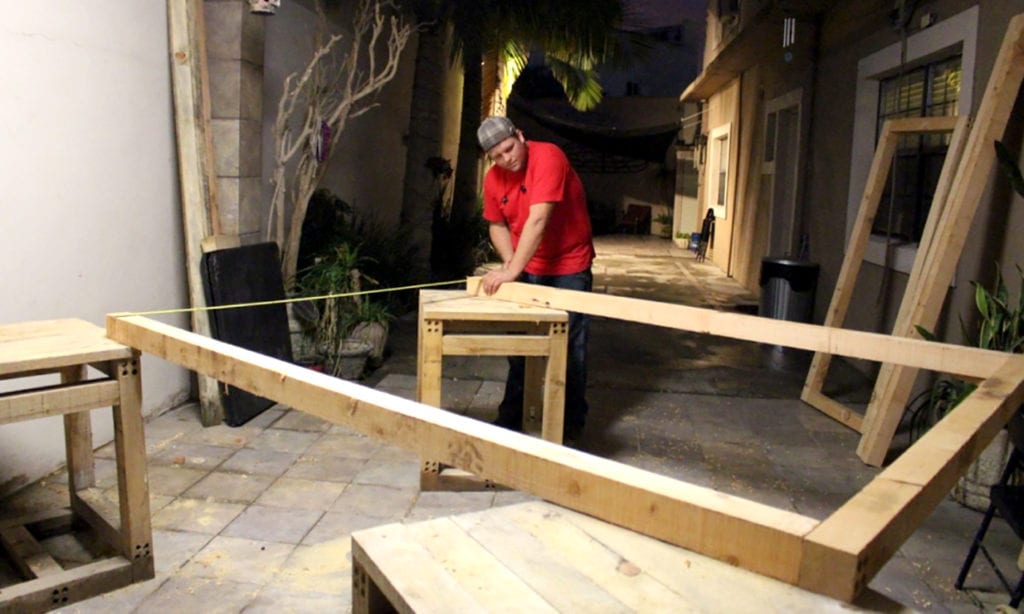 Brandon Tucker, a volunteer from Texas who manages engineering projects at the camp, works after hours on a shelf for the camp clinic. 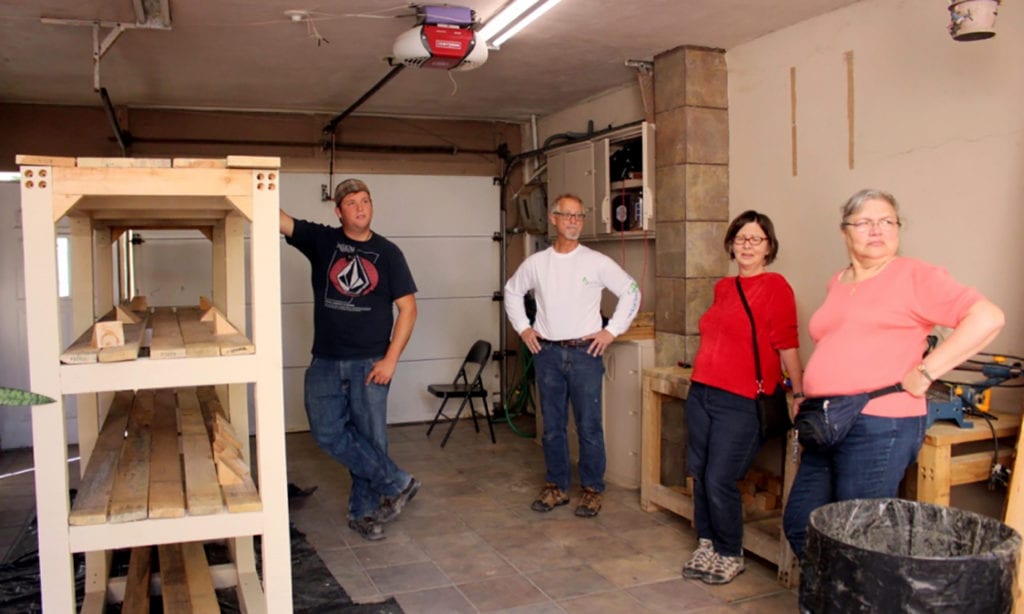 U.S. Army veteran and nurse practitioner Helen Perry established the clinic in October after hearing from a Salvadoran friend about the desperate conditions at the camp. Perry was a volunteer for GRM, which was founded in 2017 by Iraq and Afghanistan veterans.

“I was seeing all of these pictures of people who were living in tents and how despondent they were,” Perry says. “So… I started tracking down the people who had been here and started asking, ‘what are they doing for health care?’ And nobody could answer the question. So I said, ‘Fine, I’ll just go myself.’”

Waylaid by Hurricane Dorian in the Bahamas, where she spent three weeks, she landed in Matamoros the first week in September, with a simple aid bag and some over-the-counter medication. After word got out that a nurse was at the camp, she was bombarded. 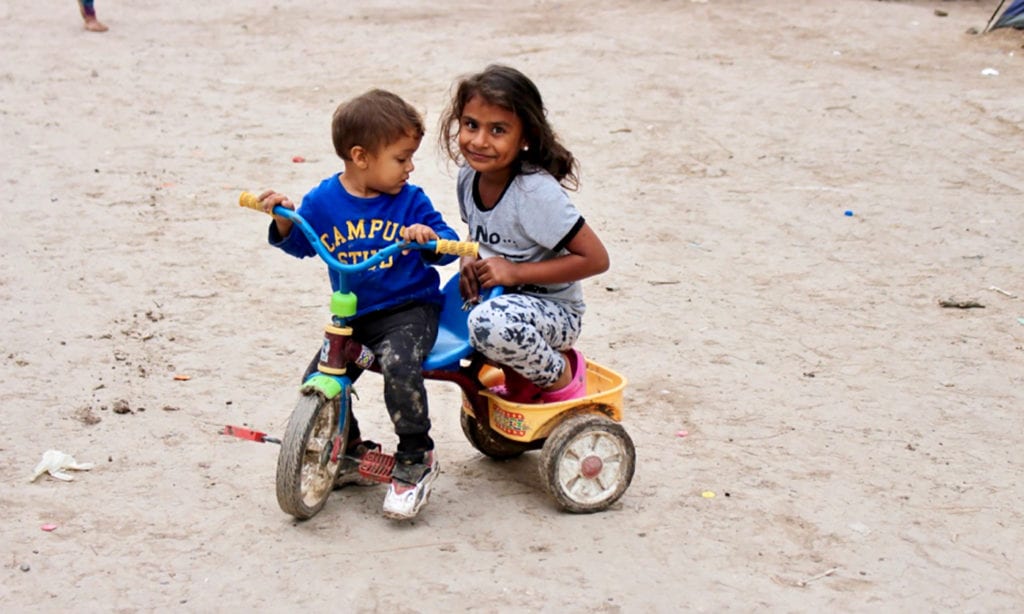 Children play in the corridors of the tent camp, exemplifying resilience as they smile and laugh through their trauma.

She saw multiple cases of people with chicken pox living next to pregnant women —putting both mother and baby at risk. She saw kids with severe cellulite infections, such as a baby girl with a fungal infection so severe it had contracted the skin and she couldn’t lift her arm.

“I was seeing kids who were already starting to have corneal hazing from having chronic pinkeye because they were washing in the river,” she says, noting that while pinkeye is very treatable, without the right antibiotics it can lead to permanent vision loss.

Perry returned home to Florida and wrote a proposal, then started cold-calling people, quickly raising $50,000 to set up a mobile clinic. With the funding she put together a team, including several doctors, and began operating. 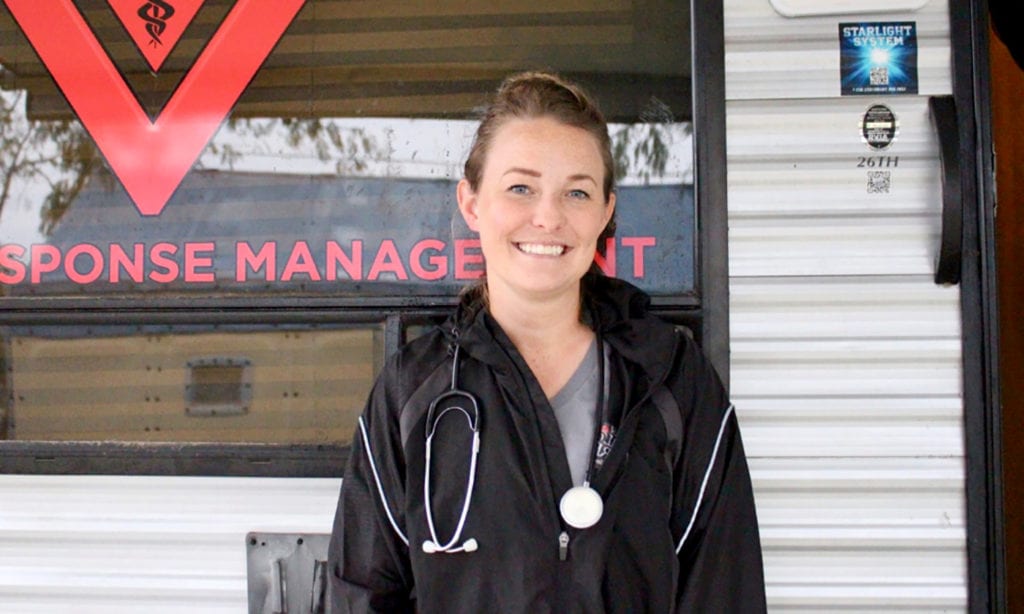 Staff from GRM’s 750-member network of health care providers come down for a week or two to lend a hand. They include people such as Mari Cordes, a veteran nurse and Vermont state legislator who used the holiday break to serve. And Dr. Johanna Dreiling, a family physician who is spending a week here with her family while taking a year on the road in what they’re calling a “road school.”

As the medical team attends to about 50 patients a day, Wisconsin immigration attorney, Charlene D’Cruz, of the nonprofit Lawyers for Good Government, attends to the legal needs of another 50. Frequently the teams work in tandem. Under the Migrant Protection Protocols, the medically vulnerable should not be returned to Mexico once presenting themselves at the U.S. border, but they are — repeatedly.

D’Cruz, Perry, and Zavala all intervened in the case of Yanet, a Honduran asylum-seeker with an abdominal tumor appearing to be ovarian cancer. Together, D’Cruz and Dreiling went to talk with CBP officials. She was turned back the first time and forced to wait before finally being allowed to join her husband in Nevada. 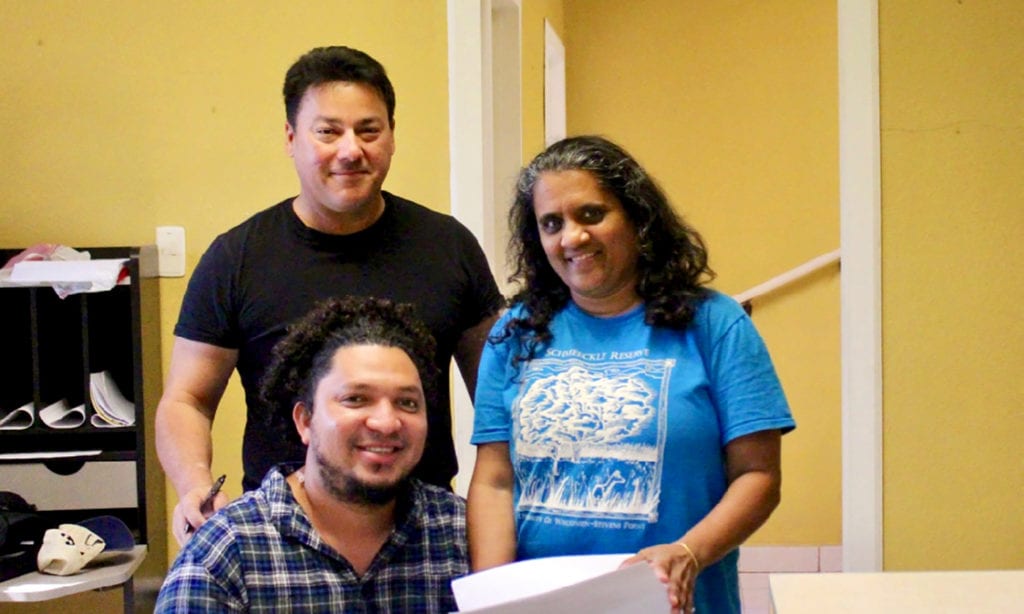 Attorney Charlene D’Cruz, right, of Lawyers for Good Government with her staff, both asylum-seekers, Daniel Perez from Venezuela and Oscar Borjas from Honduras.

D’Cruz, one of the founders of the Florence Immigrant and Refugee Rights Project, began working with Central American asylum-seekers in the 1980s, during the U.S.-sponsored civil wars that wreaked political and economic havoc on Honduras, El Salvador, Guatemala, and Nicaragua.

She sees a lot of similarities with the clients she’s interviewing these days, both in the level of violence they face and in the reluctance of the U.S. government to take in the victims, despite its role in destabilizing the region. In both cases, innocent families are the ones caught in a level of violence horrific enough to force them to grab their families and flee, she says.

“Trauma is a cornerstone of asylum law, and what these folks are facing is not just trauma, but re-trauma,” she says. “They are re-traumatizing them by forcing them to stay in Mexico. They are re-traumatized constantly on the trip up here— and then the trauma of facing judges and border agents. It’s just continuous.” 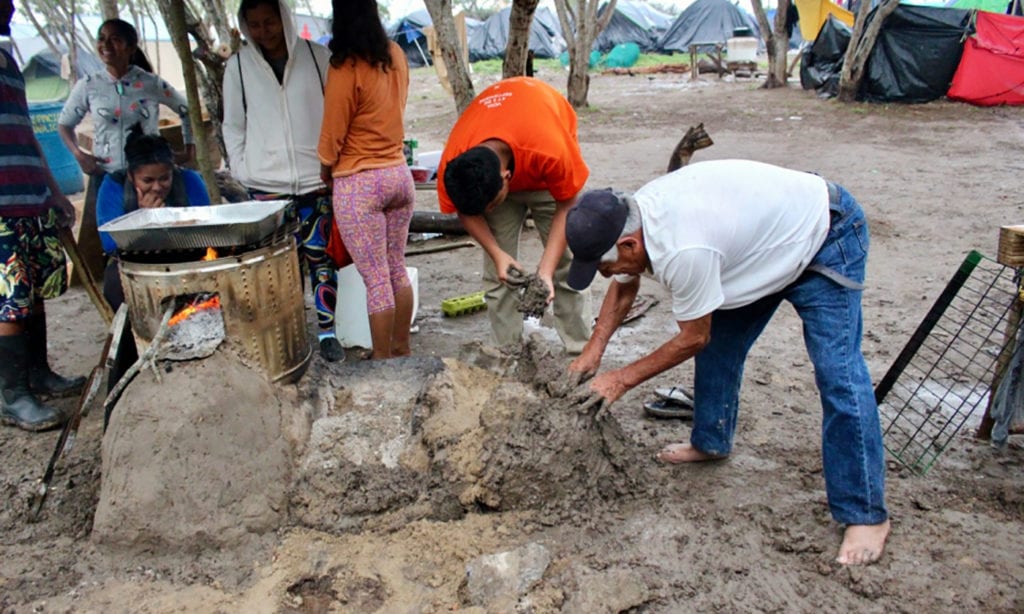 Asylum-seekers take advantage of the rain to build a mud oven in their camp. 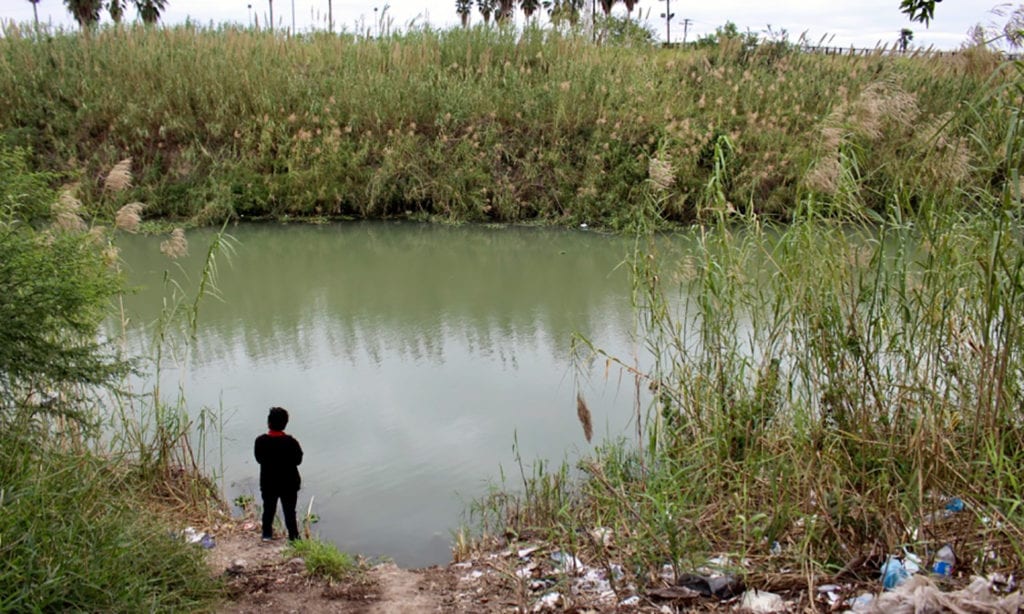 A woman stands on the banks of the Rio Grande. Noises from a school and a college can be heard from the other side.

A fundamental principle of asylum law is non-refoulement—a prohibition on returning asylum-seekers to a country where they are in danger. “Many of my clients have been sequestered, kidnapped, raped,” she says. “And they tell the stories to the asylum officers saying, ‘I am so afraid of going back to Mexico’— and they still get denied. Hardly anybody gets approved through a non-refoulement interview to stay in the U.S. The State Department has said that this is a level 4 highly insecure area, and yet they do not believe any of it.”

For her part, Zavala is determined to do all she can to ensure that in this camp where she operates, everything possible is being done to assure these traumatized families a measure of dignity and a fair shot at a new life.

She says, “In a time where asylum-seekers are being denied the fundamental right to humane and dignified treatment and access to the services they urgently need, we have pledged a strong commitment to fighting for them.”

Teaser photo credit: Gaby Zavala coordinates with staff and volunteers at the mobile clinic in the Matamoros camp. Zavala opened the Resource Center for Asylum Seekers in Matamoros to provide social, legal, and health services for asylum seekers in the encampment. ALL PHOTOS BY TRACY L. BARNETT.