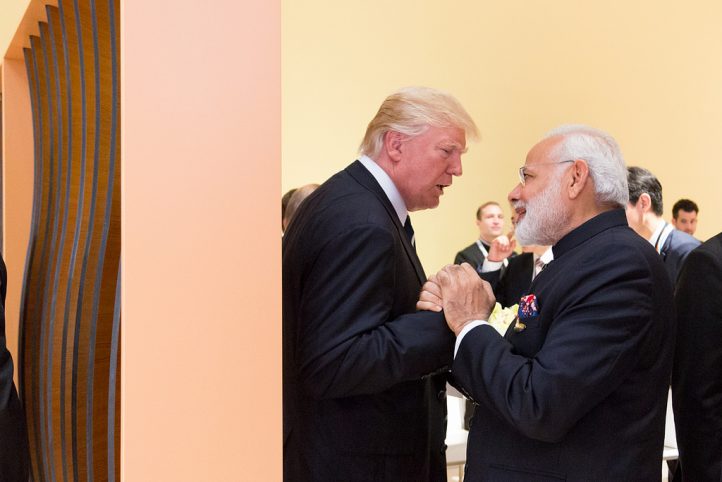 The world’s burgeoning far-right movements are far-flung and diverse, but in government they share a few core tendencies: They attack minority populations. They criminalize dissent. And they’re horrible for the planet.

The slide into extractivist authoritarianism in the U.S. is part of a worldwide trend, exemplified by the parallels between the U.S. and Brazil, where far-right president Jair Bolsonaro is presiding over an accelerated destruction of the Amazon, attacks on Indigenous Brazilians, and brazen profiteering by aligned corporate interests.

Another striking international parallel was on display recently in Houston, Texas, where Indian Prime Minister Narendra Modi shared the stage with Trump at an event that felt like a fascist rally.

The Bharatiya Janata Party (BJP), Modi’s political party, is rooted in a much older organization called the Rashtriya Swayamsevak Sangh (RSS), a connection the BJP doesn’t deny — Modi himself is a long-time RSS member.

Early RSS ideologues were inspired by European fascism. B.S. Moonje, a mentor of RSS founder K.B. Hegdewar, visited Italy, met with Mussolini, toured fascist youth indoctrination camps, and was inspired to popularize an Indian version of these camps through the RSS.

M.S. Golwalkar, another early RSS leader, openly praised Nazism in his writings. He wanted to create a Hindu nationalist India based on the ethnonationalist, militaristic vision of fascism. Golwalkar never apologized for or retracted these views during his lifetime, and the RSS waited 67 years to publicly repudiate them, making the repudiation not particularly credible.

But this isn’t just an ancient skeleton in the BJP’s closet. The violent ethnonationalism that RSS leadership admired and espoused in the 1930s is very much alive in the agenda of today’s BJP. This ideology views Muslims as the enemy of India’s national identity, and Muslims have been the main target of the Modi government’s politics of violence and repression.

The best-known example is the BJP government’s escalation of the decades-long conflict in Muslim-majority Kashmir.

Article 370 of the Indian Constitution provided for a certain measure of autonomy for the state of Jammu and Kashmir. Article 35A, a provision of Article 370, restricted acquisition of land in the state by persons from outside it.

In August, the Modi government unilaterally scrapped Article 370 using questionable means. This was a prelude to the further militarization of an already heavily militarized territory, a communications blockade that eliminated all internet, mobile phone, and landline service, and worsening violence against Kashmiris, with reports of deaths, torture, and detention (including detention of children).

Eliminating Article 35A opens the door to changing the demographics of Muslim-majority Kashmir through settlement, much like Israel’s practice in occupied Palestine. Doing so would be completely consistent with the BJP’s ethnonationalism.

A lesser known example of the Modi government’s Islamophobia is its campaign to strip Muslims of alleged Bangladeshi descent in the state of Assam of their Indian citizenship unless they can prove their citizenship — in a country where most people, especially the rural poor, don’t have birth certificates.

Also excluded from the “citizens’ list” created by the Modi government are transgender people.

The Indian government is now building camps to detain people who are stripped of their citizenship. Mass detention of a civilian population, usually based on their ethnic, religious, or other identity, fits the definition of concentration camps.

There are obvious parallels with the U.S. here. The Trump administration’s horrific border policies include detaining children and families in concentration camps, as experts who’ve studied the history of concentration camps agree, regardless of what right-wing apologists say. And The Trump administration is engaged in a legal assault of its own against the basic rights of transgender people and LGBTQ people more broadly.

Then, there’s the Modi and Trump regimes’ deep-seated hatred of Muslims. The U.S. government has gone to the extent of banning people from specific Muslim-majority countries from entering the U.S. altogether. While courts have upheld this policy on the grounds that its stated intent is to keep out nationals from countries with ties to “terrorism,” Trump’s own statements point to the intent to exclude Muslims from the U.S.

Other parallels between the far-right political projects in India and the U.S. include their ties to extractive industries and their shared objective of criminalizing opposition to extractivism, particularly by Indigenous peoples.

In the United States, a recent investigative news report revealed that oil and gas companies have been lobbying Congress to insert provisions criminalizing protests against fossil fuel infrastructure into a pipeline safety bill. Similar laws are already on the books in states such as Louisiana and North Dakota. Besides being an attack on the right to protest, these laws are outright assaults against Indigenous peoples who have been in the forefront of struggles against fossil fuel infrastructure in the U.S.

These laws are being pushed by the fossil fuel industry — along with regulatory changes rolling back automobile fuel efficiency standards, making it easier for coal power plants to pollute, and more. The U.S. government increasingly acts like a tool of fossil fuel companies and oligarchs.

Similarly, Modi has direct ties with Indian billionaire Gautam Adani, who has benefited from public subsidies and deregulation for his fossil fuel, mining, and other business interests. Adani has also been a vocal supporter of Modi, including when the latter faced scrutiny for his role in covering up an anti-Muslim pogrom when he led the state of Gujarat. Adani’s company has a sordid record of destroying ecosystems and violating Indigenous rights, from Gujarat to Australia.

And like the U.S. government, the Modi government is also criminalizing Indigenous resistance to extractivism by equating it with “terrorism.”

Exploring these parallels isn’t an academic exercise. For cross-border movements for justice to successfully dismantle far-right ethnonationalism backed by fossil fuel and other corporate interests, in the U.S., India, Brazil, and elsewhere, we must start with a shared understanding of the common material and ideological foundations of the global far right. Sharper understanding can make our resistance more effective.

India and Pakistan are baking, and every powerful institution is to blame

By Basav Sen, originally published by Foreign Policy In Focus

By Basav Sen, originally published by Foreign Policy In Focus