Juchitán, Oaxaca – Pablo Pineda Robles can’t imagine his life without the countryside. He was born on the ranch that his parents built and was raised on fresh corn on the cob. Today, at the age of 74, he continues to cultivate the grain of life, an heirloom corn called zapalote chico.

In the Isthmus of Tehuantepec about 17,000 farmers produce a wide range of crops, including corn, mango, sesame, beans, melon, watermelon, peanuts and sorghum. An organization called “Xhuba ‘Binii” (which means “corn seed” in Zapotec) made up of 250 farmers has decided to plant the zapalote chico, which is endemic to the area and one of the most resilient of Mexico’s 64 landraces of corn.

Community organizer Tomás Chiñas Santiago founded the group four years ago as a means to collectively improve and disseminate the zapalote chico seed through hand selection by campesinos, thereby strengthening the landrace as well as the local resistance to the introduction of transgenic corn as a commercial crop in Mexico.

In fact it was here in Oaxaca, in the town of Capulalpam, almost two decades ago, where a researcher at the University of California, Berkeley, discovered that the native corn had been contaminated with Monsanto’s transgenic corn, a finding that triggered a controversy, a lawsuit and the movement against transgenics in Mexico– a struggle that continues to this day. 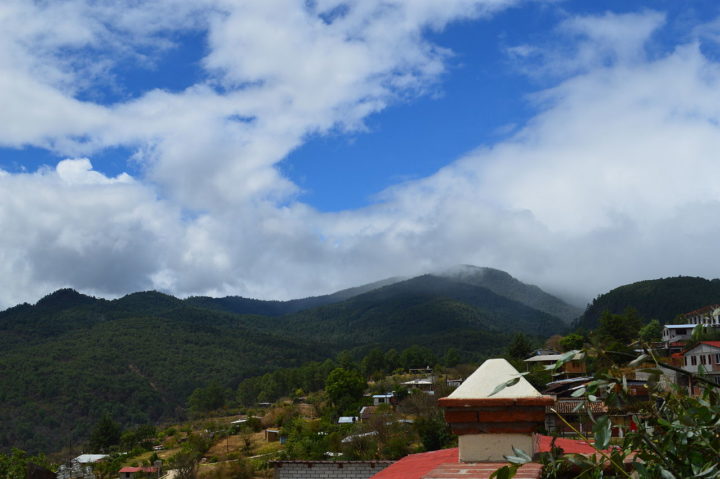 Rosario del Carmen Carrasco, a young campesina, serves as president of the “Xhuba Binii” group. She has cultivated more than 20 hectares of zapalote chico. Rosario inherited her love of the countryside from her father, and although she graduated as an engineer, she has practiced agriculture her whole life. However, she recognizes that farming organically produces corn of better taste and quality, because agrochemicals are not used and the farmers are employing a traditional breeding technique. This technique consists of making a selection of the plant when it is in the field. The plant must be healthy and must be developed well in order to reproduce, because each corn plant contains both sexes: male (panicle or spike) and female (where the grain, the cob, along with what covers, which is the totomoxtle, or corn leaf).

The producers of this group divide their seeds, and 50 percent are allocated to a seed bank that reproduces each season, while another 50 percent is used for sale and consumption, creating foods such as moles, tortillas, tamales and atole. 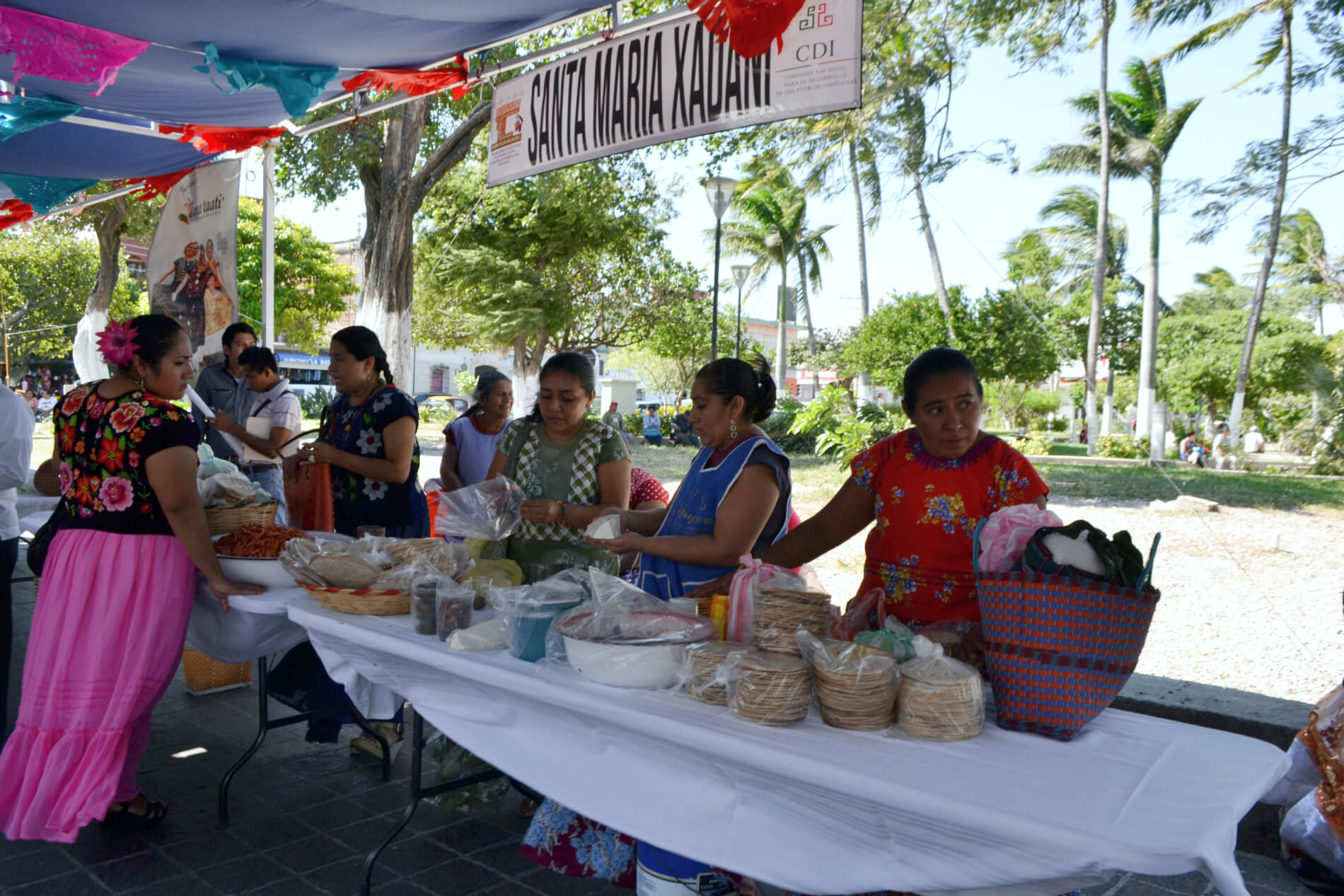 Totopo producers, called “totoperas,” offer their products and also give a demonstration at the Totopo Fair that takes place in Juchitán.

Zapotec researcher José Manuel Cabrera Toledo of the Technological Institute of Comitancillo, who also advises this group, shared that the primary objective of planting the “King of the Isthmus” — so called for its traditional use, and its ability to withstand drought and the region’s heavy winds — is to preserve it and continue spreading its use. He added that although climate change and drought have discouraged planting, with techniques and support from specialists, the crop can continue to flourish.

“In this field where we obtained the gastronomic sample, despite the fact that it lacked irrigation, the crop was productive; the corn is strengthened, its seeds are white and ready to be distributed in the market,” said Cabrera Toledo.

“This corn was planted in December and after 70 days we are enjoying it,” said Cabrera. “What we want is to motivate more peasants, so the land is worked and not abandoned. We know that genetic erosion and also pollution are the order of the day, but we cannot stop planting. For the moment, at least, we have enough corn to last a long time.”

This process of adaptation has not been easy, said Chiñas Santiago, but it is working, because despite the strong winds and scarce rain, the seed obtained is resistant and it is able to produce an average of 2.5 tons per hectare of very good quality grains, when in other circumstances, and under seasonal conditions, the average yield is less than one ton per hectare.

The project consists of three stages. The first was carried out in 2015, where ten hectares were planted and the farmers who decided to enter the project could learn new agronomic techniques, without losing the essence of traditional sowing through the old-fashioned plow, he explained.

One of the reasons many farmers have agreed to plant despite the scarcity of water and the strong wind is the popularity of a traditional Isthmian meal, the totopo — a type of very crunchy toasted tortilla that is cooked in comixcal or clay ovens, made by artisans. 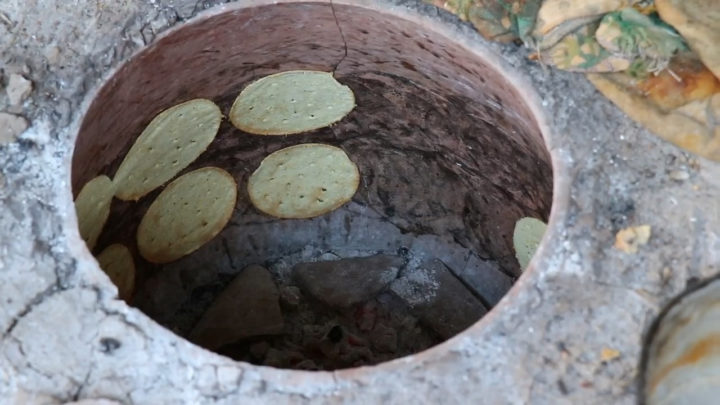 “I decided to promote sowing, because I believe that without corn there is no life,” said Chiñas Santiago. “It is a food of our ancestors; the origin of all of us is born from this seed rich in proteins and vitamins.”

The community organizer also stressed that  industrialized corn flours offered commercially under the Maseca brands have been found to contain more than 90 percent transgenic corn, according to the Organic Consumers Association, and contains traces of the herbicide glyphosate, which is classified as a “probable carcinogen” by the World Health Organization.

In the Isthmus of Tehuantepec, the practice of industrial agriculture has met with many challenges. The Mexican government for more than 40 years invested in rice cultivation in the region, but seeing poor results, promoted the production of sugarcane, which also failed; and now the sorghum crops it promotes are headed in the same direction. Despite being historically marginalized by public policies, however,  corn, along with the traditional milpa, refuses to die.

Pablo Pineda Robles is one of the 250 campesinos who are participating in the project, and for each hectare he invested nearly 8,000 pesos (about $400 USD). His farmland is seasonal, so he waits annually for the rain to fall so he can begin planting. 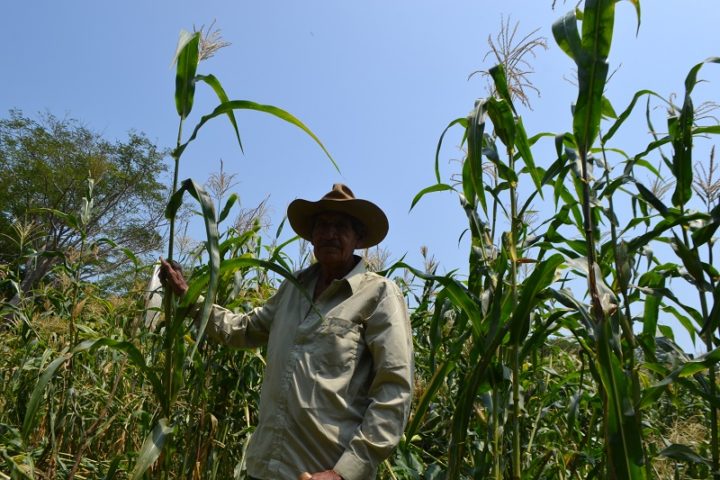 He is passing the farm on to his children even though they are professionals, and in the mornings they work and in the afternoons they visit their harvests.

“I ask the young ones not to let the countryside die,” he said. “It is very noble and it is also hard work; one has to organize, invest and achieve improvements for life,” he said.

Together with his wife Julieta Regalado, Pablo shared hot atole and tamales made with tender corn that they harvested from their land.

“The corn is really delicious, and the atole, and the tamales, too. And that’s not even talking about the tortillas,” said Julieta. “We want to continue living in the countryside because it is our everything. Here we eat broth of chicken, rabbit, armadillo, pigeons; we raise them and eat them. When our harvest gives, it is shared with neighbors and relatives because for us it is a blessing”, she said.

The 8.2-magnitude earthquake of Sept. 7, 2017, which affected thousands of homes in this area of ​​Oaxaca, also destroyed the bread and tortilla ovens that Zapotec women used to create traditional food.

Faced with this situation, the women organized, and 80 women decided to rebuild on their own. Since then, each month they produce 50,000 totopos and sell them nationwide through a brand called “Tona Taati’ ¡Totopo Güero!”.

The women, Zapotec artisans, are part of the indigenous working group called “Tona Taati’” in honor of Petrona Esteva, a local heroine who participated in the battle of Sept. 5, 1866, when the city of Juchitán defeated an army of French invaders. An initiative seeks to generate income for women and revitalize the appreciation of zapalote chico corn, as the Zapotecs call it, because it is native to the Isthmus of Tehuantepec.

The totopo is a tortilla made with native corn and cooked at high temperatures in clay ovens called comixcales. It is considered a Zapotec gastronomic cultural heritage. 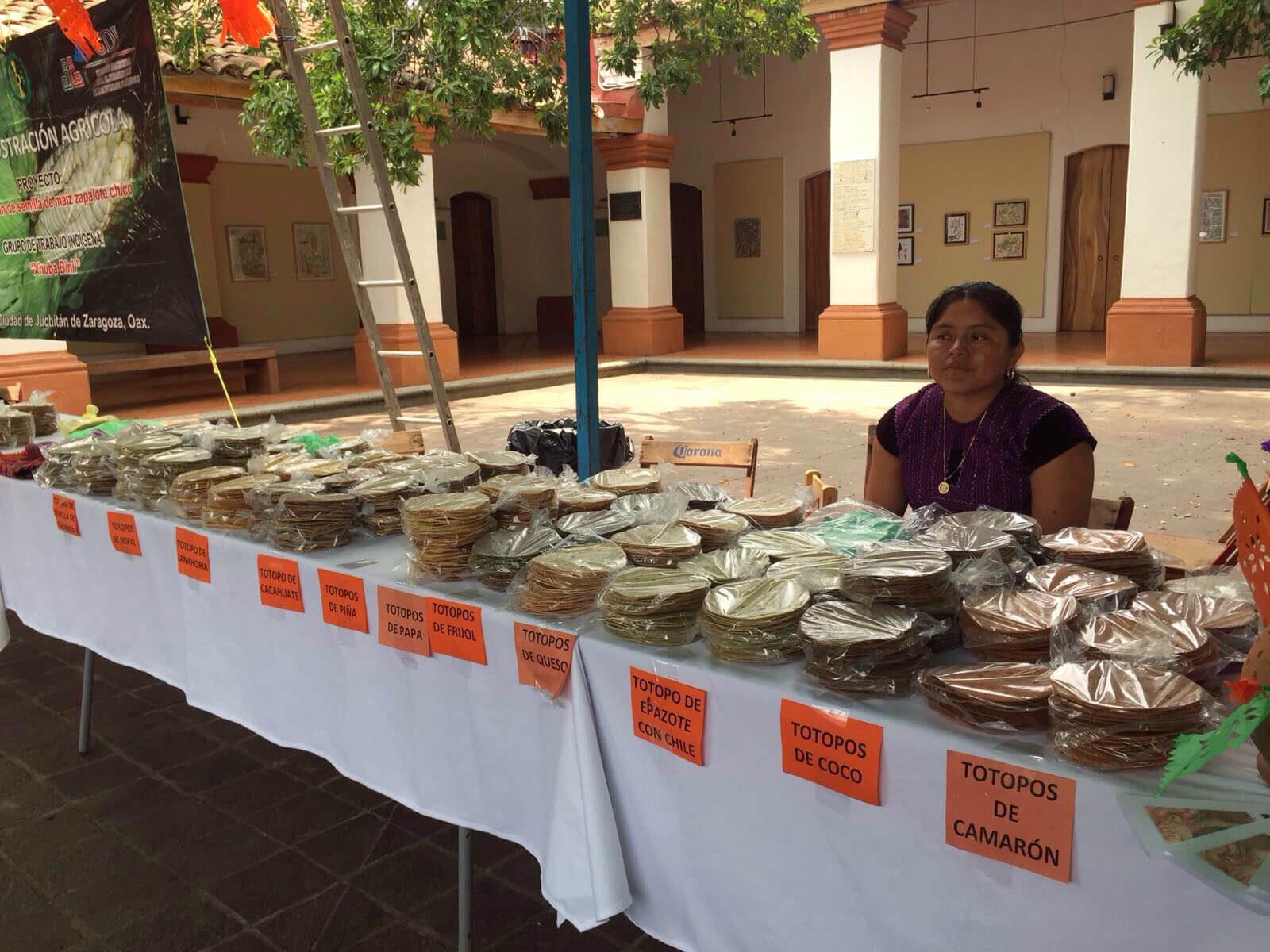 Totopo producers, called “totoperas,” offer their products and also give a demonstration at the Totopo Fair that takes place in Juchitán.

Isabelia Sánchez Martínez, 65 years old, started making totopos at the age of 15, and is happy because now she is able to sell them at the national level. Each day she produces 300 to 400 pieces, guaranteeing an economic resource to support her family.

“I’m happy that our totopo is consumed elsewhere,” said the artisan, who makes this Isthmian product daily. “After the earthquake our ovens broke. We did not receive any support from the authorities, nor the municipality of Juchitán, and much less from the federal government. Alone and with our savings we rebuilt them, and continue making our corn tortillas, because it is a food that gives us identity,” she said.

This project was designed by Chiñas Santiago, who also serves as the representative of the Tona Taati’ group with the aim of improving women’s economic income and obtaining a better price by selling their totopos in bulk. On the national market a package of 150 grams containing 10 chips of 14 centimeters in diameter sells for between 30 and 35 pesos.

Dalia and Lucila Sánchez Martínez are also part of this organization. Both lost their ovens in the earthquake, but nothing could stop them, and they rebuilt them again with their own income.

“We really like what we do because we put in heart and love,” said Dalia. “Knowing that people from other places buy it, it makes us very proud because we make it with 100 percent pure organic corn that uses no fertilizer. ” 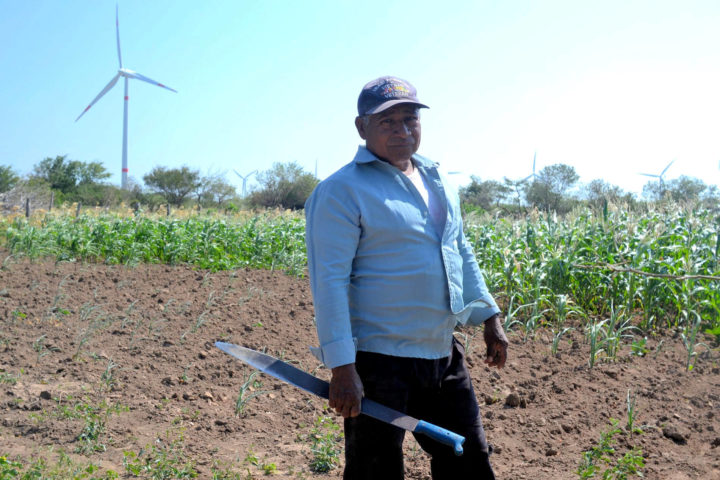 Jesús Toledo Pineda of Juchitán, a Zapotec farmer who has been working in the fields for half a century, grows Zapalote Chico corn traditionally and organically. He is against the cultivation of transgenics, declaring that that “Without Corn, there is no country.”

If tortillas are made in the traditional way, they sell for 160 pesos, but if they use a machine the cost is 120 pesos.

“We gave them chips, and they put them in bags and sell them, so we avoid going house to house, plus we get more profits,” Dalia said.

The distribution of totopo in addition to being regional and state, also reaches Mexico City. There are two presentations: the totopos of 14 centimeters in diameter and the other known as “botaneras” that are 8 centimeters in diameter. If well preserved, the chips can last up to a year in the package without losing their nutrients, flavor and consistency.

The brand “Tona Taati’ ¡Totopo Güero!” won the endorsement before the National Commission for the National Institute of Indigenous Peoples (INPI) and its brand is called “Indigenous Hands. Mexican Quality”.

“This is a project that was achieved a year ago, although it has been in the making for more than a decade, which goes hand in hand with the zapalote chico corn rescue project,” explained Tomás Chiñas. “The benefit is that the 80 totoperas get added value to their products, have higher income and have a marketing channel.”

The bags, which bring 15 pieces of crispy chips, they cost between 30 and 35 pesos in the national market.

This article is a part of Food as Medicine, an exclusive series made possible by a grant from the Elna Vesara Ostern Fund.