We know very little about Queen Boudica of the Iceni (20 AD (?) – 61 AD) and most of what we know is probably deformed by Roman propaganda. But we may still be able to put together the main elements of her story and how it was that she almost threw the mighty Roman Legions out of Britain.

You probably know the story of Queen Boudica. Tall, strong, and terrible, she was the embodiment of the fierce warrioress who fought – bravely but unsuccessfully – to defend her people from the oppression of an evil empire – that the Romans. It all happened during the reign of Emperor Nero, 2nd century AD.

As usual, the passage of time has turned these events into legends, deformed by the lens of propaganda. But maybe we can still discern the reasons for Boudica’s rebellion and learn something relevant for our times. As it often happens in history, to understand why something happens, you only need to follow the money.  In this particular case, it is curious that the money that triggered the war may have been provided by no one else than Lucius Annaeus Seneca, yes, the Stoic philosopher. But it is a story that needs to be told from the beginning. 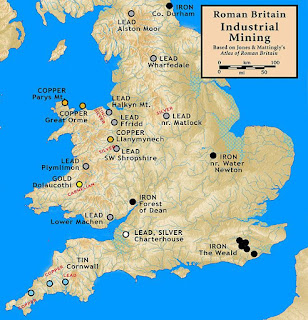 First of all, why were the Romans in Britain at the time of Queen Boudica? Simple: because of the British mineral resources. Britain had a long story of mining that went back to the Bronze Age and to even earlier times. The British mines could provide copper, tin, iron, lead, and even precious metals: gold and silver. These were all vital resources for the Roman Empire, which used precious metals for coinage and all sort of metals for its various technologies.

The Romans already set foot in Britain at the time of Julius Caesar, in 55 BC. They set up a full-fledged invasion only in AD 43 under Emperor Claudius. But even before invading, according to  Strabo‘s Geography, there was a brisk commercial network that connected Rome to Britain, with Britain exporting metals and importing luxury goods of all sorts, silk, olive oil, food, slaves, and more.

This story tells us a lot about how the Romans managed their empire. Their expansion was not simply a question of a blitzkrieg war machine. Invading a foreign country was preceded by a long period of cultural and commercial assimilation and it was attempted only when it could provide a financial profit. That required a certain degree of economic development of the regions being assimilated. It didn’t work with the Germans, who had no mines and only a relatively primitive economy. But Britain was a perfect target with its well-developed mining industry. So, after having been defeated by the Germans at Teutoburg, in 9 AD, the Romans abandoned their plans of expanding in Central Europe, shifting their attention to Britain. It worked: in military terms, the invasion of 43 AD was relatively easy. After the invasion, the mines increased their production by means of Roman technology, commerce boomed, new Roman settlements were built, and Britain was being gradually romanized.

But something went badly wrong in 60 AD, when the Romans suddenly faced a major rebellion of the Iceni people living in Eastern England, led by their redoubtable queen, Boudica. At the end of this post, you can read the details of the story as we know it, told by Jason Porath in a light-hearted style. Summarizing, when Boudica’s husband, King Prasutagus, died, the Romans intervened, seized his lands, had his widow flogged, and his daughters raped. The queen was not amused and the rebellion started with all the associated atrocities, exterminations, burnings, cities razed to the ground, and so on. Eventually, the Romans managed to get the upper hand and Boudica killed herself.

But what made the Romans behave in a way that was nearly sure to spark a rebellion? Maybe it was just their lust for power, but there is a detail told by Dio Cassius (vol VIII, Cassius Dio, Roman History, 62.2) that can help us understand what happened. Cassius says that Seneca (yes, he was a philosopher, but also a rich man) had lent to the Iceni a large sum of money and that the Iceni were unable to return it. That suggests that the key of the story – as it is often the case – was money.

According to Dio Cassius, we are talking of 40 million sesterces. What kind of money is that? It is not so easy for us to visualize this sum, but we know that in those times a Roman legionary was paid nine hundred sestertii per annum. So, 40 million sesterces could pay some 50 thousand troops for a year – a large military force for the time. From other data, we could say – roughly, very roughly – that the value of a sesterce was of the order of 50 dollars. So, 40 million sesterces could be compared to some two billion dollars today. We don’t know what plans King Prasutagus had for that money but, clearly, we are discussing large sums for a small economy such as that of the Iceni tribe.

Whatever the plans of the king were, something went wrong and the money couldn’t be returned. Dio Cassius faults Seneca himself for having precipitated the rebellion by insisting to have his money back. This seems to be unlikely, as discussed by Grimal. Cassius was writing more than a century after the events he was describing and he may have wanted to cast Seneca in a bad light for ideological reasons. But whether or not Seneca was involved is just a detail. What matters is that the Iceni (or, better said, the Iceni elite) defaulted on a large debt they had with the Romans.

Now, in ancient times, defaulting on one’s debt was a serious crime and the early Roman laws punished it by having the debtor drawn and quartered. In Imperial times, there were considerably more lenient laws – but these laws very valid only for Roman citizens and Boudica was not one. In this light, flogging doesn’t sound like an exaggerated punishment for defaulting on a large debt. Even the rape of her daughters was not something really unusual as a punishment for non-Roman citizens in those times. In any case, it is likely that the Romans didn’t do what they did because they enjoyed torturing women — they used the default as an excuse to seize the Iceni kingdom. We can’t even exclude that the loan was engineering from the beginning with the idea of annexing the kingdom to the Roman Empire.

At this point, the Iceni elite had little choice: either lose everything or rebel against the largest military power of their time. Neither was a good choice, but Boudica chose the one that turned out to be truly disastrous.

All that happened afterward was already written in the book of destiny – the archeological records tell us of cities burned to the ground, confirming the reports of the Roman historians of initial Iceni victories. The atrocities reported by the Roman historians were probably exaggerated, just as in the final Roman victory the number of the Iceni fighters may have been much exaggerated to emphasize the value of the Roman troops. Even Boudica herself was portraited as a larger-than-life heroine, but we can’t even be completely sure that she actually existed.

What’s most interesting in this story is the light it sheds on the inner workings of Empires. We tend to think that Empires exist because of their mighty armies – which is true, in part – but armies are not everything and in any case the soldiers must be paid. Empires exist because they can control money, (or capital if you prefer). That’s the real tool that builds empires: No money — no armies! Hence, no money – no empire. The mighty financial power of the Roman Empire made the Iceni rebellion doomed from the beginning. The destiny of ancient Britain was to be fully romanized and, in a few centuries, Boudica was forgotten by her own people. The Roman Empire faded, but the Roman influence on British customs and language remains visible to this day (even though the ghost of the old queen may have been pleased by hearing of the Brexit!).

And that takes us to the current empire, the one we call the “American Empire” or “the “Western Empire.” It does have mighty armies but, really, the grip it has on the world is all based on money. Without the mighty dollar, it is hard to think that the large military and commercial network we call “globalization” could exist.

So, can we think of a modern equivalent of the Iceni rebellion? Surely we can: think of the end of the Soviet Union. It was brought down in 1991 not by military means but by financial ones. The debt the Soviet Union had with the West is estimated at US$ 70 billion, in relative terms probably not far from the 40 million sesterces the Iceni owed to the Romans. Unable to repay this debt, the Soviet elites had only two choices: dissolve or fight. They made an attempt to fight with the “August Putsch” in 1991. It failed rapidly and there was no chance for the Soviet Communist to make a mistake similar to the one Queen Boudica made, that is starting a full-fledged military rebellion. Fortunately for everybody on this planet (the Soviet Union had nuclear warheads), history doesn’t always repeat itself!

But, if history doesn’t repeat itself, at least it rhymes and the ability of the Western Empire to use financial means to bring countries into submission is well documented. Another, more recent, case, is that of Greece: again a nation that couldn’t give back the money it owed to the imperial powers. For a short moment, in 2015, it looked like the Greeks had decided to rebel against the empire – although that would have been only a purely financial rebellion – no march on Brussels planned! In the end, the Greek elites chose to submit. The punishment on the Greek citizens has been harsh but, at least, their country was not bombed and destroyed, as it happens rather often, nowadays when the Imperial Powers that Be become angry.

But for how long will the Western Empire remain powerful? Just like for the Roman Empire, its destiny seems to be a cycle of growth and decline – and the decline may have already started as shown by the failure of the attempt of bankrupting the heir of the Soviet Union, Russia (again, fortunately for everybody, because Russia has nuclear weapons). The globalized empire seems to be getting weaker and weaker every day. Whether this is a good or a bad thing, only time will tell.