There is no carbon budget left for 1.5°C climate warming target, which means that to achieve this outcome every tonne of emissions must be matched by a tonne of drawdown of atmospheric carbon from now on. For that reason, carbon budgets and emissions target should be complemented by a carbon drawdown budget and target.

That’s the proposal made by Breakthrough, the Melbourne-based National Centre for Climate Restoration, to the Victorian climate change targets 2021-2030 expert panel, last week.

In the submission, Breakthrough established that:

Here’s the story in more detail.

The Paris Agreement has a policy goal of 1.5–2°C, but even 1.5°C is far from safe and is not a satisfactory target:

At the current warming of just over 1°C compared to the late nineteenth century, Earth is now approximately 0.5°C warmer that the maximum of the Holocene (the period of relatively stable temperatures over the last nine thousands years and the period of human civilisation), and as warm as it was during the prior Eemian interglacial period, when sea level reached 6-9 meters higher than today. It would be precautionary to establish a warming goal of less than 0.5°C, with the aim of cooling Earth back to this safe zone at the greatest possible speed.

There is no carbon budget for 1.5°C, which means that to achieve this outcome, from now on every tonne of emissions must be matched by a tonne of drawdown of atmospheric carbon.

The issues are canvassed at “Unravelling the myth of a ‘carbon budget’ for 1.5°C.” Rogelj et al. noted in 2017: “ If the 1.5°C limit should not be breached in any given year, the budget since 1870 is roughly halved and already overspent today” (emphasis added). 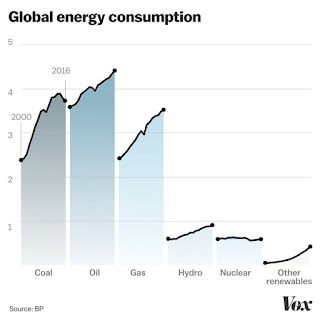 In fact, today’s CO2 level if maintained would produce a lot more warming that 1.5°C. In the early- to mid-Pliocene 3–4.5 millions year ago, CO2 levels were similar today at 365–415 ppm but  temperatures were 3–4°C warmer than pre-industrial values and sea levels were 25 metres higher.

Warming is being masked by anthropogenic aerosol emissions, a good proportion of which are coming from fossil fuel extraction and use. This temporary cooling is estimated at 0.7°C, so global warming is likely to accelerate in the next few decades if the cooling influence of human-generated aerosols declines as predicted. When this is taken into account, the implied warming for the current level of greenhouse gases is more than 2°C.

Hence the Paris path of delayed emissions reductions, balanced by a probably unfeasible amount of drawdown in the second half of the century proposed by use of a technology that is unproven at scale  — BECCS — is a dangerous path. There is growing alarm amongst scientists about the BECCS political fix, for example Smith et al. 2016, van Vuuren et al. 2017 and Honegger & Reiner 2017.  It is worth noting the comments by Oliver Geden, head of the EU Research Division at the German Institute for International and Security Affairs in Berlin:

Climate scientists and economists who counsel policy-makers are being pressured to extend their models and options for delivering mitigation later. This has introduced dubious concepts, such as repaying ‘carbon debt’ through ‘negative emissions’ to offset delayed mitigation — in theory… Climate researchers who advise policy-makers feel that they have two options: be pragmatic or be ignored… Many advisers are choosing pragmatism…  Each year, mitigation scenarios that explore policy options for transforming the global economy are more optimistic — and less plausible (emphasis added).

A more rapid rate of emission reduction than generally associated with the Paris path can reduce the reliance on drawdown, and especially BECCS.

A paper just out, “Alternative pathways to the 1.5°C target reduce the need for negative emission technologies”, is worthy of a close look, and some of its propositions could be adopted by the Victorian Government.

The adoption of a carbon drawdown budget would help to normalise as necessary what is still, too often, constructed as a distant and theoretical task.

A recent paper by Kate Dooley at UniMelb, “Land-based negative emissions: risks for climate mitigation and impacts on sustainable development”, found the most cost-effective large-scale drawdown action is the restoration of carbon-dense and biologically rich natural forests.  There are also opportunities for increasing soil organic carbon (SOC), where more research work needs to be done, but one estimate from the European Academies’ Science Advisory Council is that increasing SOC could have the potential to absorb 2-3 GtC/year.

3. “Overshoot” in emission reduction scenarios should be minimised in extent and duration to avoid tipping points that may be irreversible on human time frames

All 1.5°C scenarios involved “overshooting” the target before cooling back to 1.5°C by 2100. This overshoot should be minimised by adopting more stringent emission scenarios as the basis for policymaking.

Global warming will pass the 1.5°C threshold in about a decade from now.

All 1.5°C emission scenarios include a period of “overshoot” towards 2°C, before returning to the 1.5°C threshold by 2100. 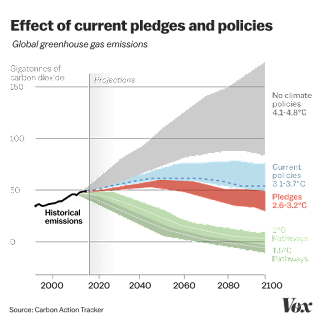 On the present high emissions path, warming will hit the 2°C by the mid-2040s, and large reductions in CO2 emissions will not by themselves significantly delay this timing, due to the “Faustian bargain” we have struck with our reliance on aerosols — a by-product of fossil fuel use — that by their significant but very short-term cooling impact are masking considerable warming. Going to zero emissions with CO2 at ~420 ppm would result in a warming of around 2°C at equilibrium, if the level of short-lived gases was constant.

Thus the 1.5°C overshoot will last several decades and up to half a century in the Paris scheme of things.

There are specific dangers in overshooting, which increase both with the duration and the magnitude of the overshoot.

In a period of rapid warming, most major tipping points once crossed are irreversible in human time frames, principally due to the longevity of atmospheric CO2  (a thousand years). At the COP23 in Bonn, Pam Pearson, Director of the International Cryosphere Climate Initiative, warned that the cryosphere is becoming “an irreversible driver of climate change”. She said that most cryosphere thresholds are determined by peak temperature, and the length of time spent at that peak, warning that “later, decreasing temperatures after the peak are largely irrelevant, especially with higher temperatures and longer duration peaks”. She added: “What keeps cryosphere scientists up at night are irreversible thresholds, particularly West Antarctica and Greenland. The consensus figure for the irreversible melting of Greenland is at 1.6°C.”

Thus “overshoot scenarios”, which are now becoming the norm in policy-making circles hold much greater risks. Specifically, overshoot to 2°C for up to half a century may trigger events and activate tipping points that cannot be reversed even with significant cooling.

Hence a more rapid rate of emission reduction than generally associated with the Paris path can reduce in extent and duration the overshooting of the 1.5°C threshold.