“Decoupling”: are we really so smart that we can do more with less? Apparently not: we can paint things in green, but it is not the same thing. But so is life and happy 2018 to everybody!
Decoupling looks like an obvious idea, isn’t it? After all, isn’t that true that we are becoming more efficient? Think of a modern LED light compared with an old lamp powered by a whale oil. We are now hundreds of times more efficient than we were and we also saved the whales (but, wait, did we…..?). So, if we can do the same things with much less energy, then we could grow the economy without using more energy, solving the climate problem and also the depletion problem. It is part of the concept of “dematerialization” of the economy. Then we paint everything in green and all will be well in the best of worlds.

But there has to be something wrong with this idea, because it is just not happening, at least at the global scale. Just take a look at this image: 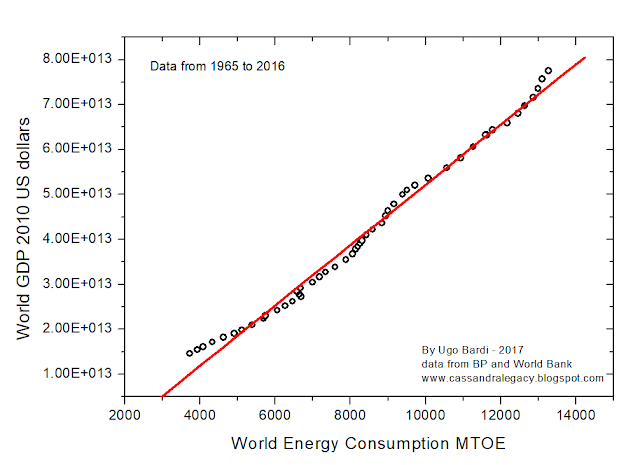 Note how closely related the GDP and the world’s energy consumption are. It is impressive because the GDP is measured in terms of money flows. So it seems that money, although not a measure of power in itself, is a proxy for power. The idea that “money is power” doesn’t seem to be just a metaphor.

Now, by carefully looking at the curve, we could say that we have been doing a little better in recent years. That is, we seem to have been able to produce a little more GDP for the same amount of energy. But there are two problems: the first that the divergence we see today is not larger than anything we have seen during the past 50 years. The second that this is NOT decoupling as it is normally defined, that is, the ability to grow the economy (the GDP) while at the same time consuming less energy.

Of course, we may argue about the definition of decoupling, but nothing else but a complete inversion of the current trend would allow us to keep growing while, at the same time, avoiding the double challenge of climate change and of mineral depletion. But if that were happening, you would see the little circles in the graph completely change the slope of the curve, forming a kind of “hockey stick” shaped curve. That’s not the case, obviously.

Actually, if you really eyeball the curve, you can see a small hockey stick that occurs at points 14-16. These points correspond to 1979-1981, a historical phase of reduced energy production during the most difficult moment of the great “oil crisis.” For about three years, at that time, we had true decoupling, but it was hardly something pleasant or that we would want to repeat today in the same terms.

In the end, society needs energy to function and the idea that we can do more with less with the help of better technologies seems to be just an illusion. If we reduce energy consumption, we’ll most likely enter a phase of economic decline. Which might not be a bad thing if we were able to manage it well. Maybe. Calling this “a challenge” seems to be a true euphemism, if ever there was one. But, who knows? Happy 2018, everybody!

Further notes: all the above is at the global level for the total (primary) energy production. It doesn’t mean that some kind of decoupling can’t be obtained at the regional level or for some specific kinds of sources. So, let’s take a look first at the regional level: 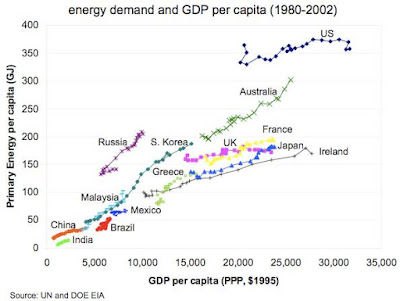 I haven’t been able to find the origin of this graph, but it seems to be legitimate (note how the axes are exchanged with respect to the one I showed before). The curves for single states are noisier than those for the global economy, which may indicate that states move high energy intensive activities from one to another. But, overall, the linear relation between GDP and energy consumption remains the same. We see “hockey sticks” (for Russia, for instance) they correspond to major economic crises, again not something that we would like to have.
Now, let’s see some data for specific energy sources. The case of crude oil is especially interesting. Here, I am reporting some data from a paper by Michel Lepetit, of “The Shift Project” (h/t Thierry Caminel) 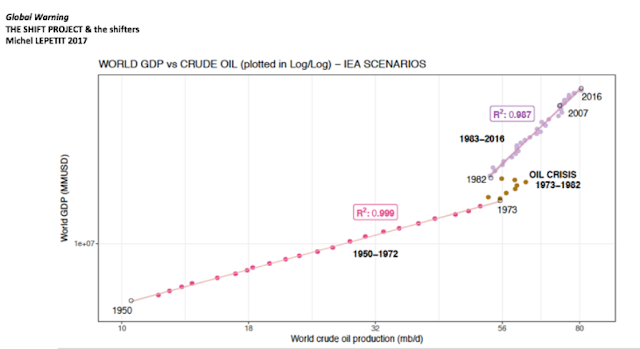 We clearly see here the hockey stick of the energy crisis o 1973-1982; it is much more evident for crude oil than it is for the aggregated world energy production. Note also how the slope of the curve of GDP vs. Production changed after the oil crisis. Evidently, the world’s economy emerged from the crisis less reliant on crude oil: a certain degree of decoupling had occurred.
But note also that the slope of the curve from 1982 onward still shows a positive dependence of oil production vs. the economy. A true “decoupling” would mean inverting the trend, as shown below (again from Le Petit’s paper), where we see what we expect from the IEA scenarios

As you see, true decoupling is quite a challenge. We saw that kind of slope change only for the great oil crisis of the late 1970s. Maybe we could see it again, today, only for another comparable crisis.
Nevertheless, I don’t think it is impossible to decouple from crude oil. As I argued in a previous post, the oil industry may be facing a “Seneca Cliff” as the result of the contemporary challenges of depletion and of technological change in transportation. But that would mean little to save humankind from a climate catastrophe if it is compensated by an increase in the production of energy from other dirty sources, say, coal.  And so, we keep going and the future is waiting for us.