What, if anything, is sacred?

‘Nothing should be sacred!’ comes the impatient answer from the enthusiasts for gene-splicing and geoengineering, the singularitarians eager to upload their consciousness into a disembodied digital eternity. To call anything sacred is to set it off-limits to improvement by the application of human ingenuity – to stand in the way of progress. And then these same enthusiasts write books called The God Species, or make declarations like ‘We are as gods and have to get good at it!’

Those of us who are not enamoured of these visions of techno-progress also end up invoking the old language of the sacred, as we try to articulate what goes missing when environmentalism talks in terms of ecosystem services. ‘In “nature” I see something divine,’ Paul Kingsnorth wrote, in an earlier issue of Dark Mountain, ‘and when I see it, it moves me to humility’.

As we reach for words that might encompass the vastness of the unravelling now underway, the great tide of loss that our kind has brought about – above all, the sixth mass extinction in the long life of our planet – it seems these are the words that come to hand. Whether taken up in a spirit of humility or of hubris, this is a language that speaks of ultimate things, of power, of loss and longing, of limits and of the limitless.

Given the territory in which Dark Mountain has wandered over the past eight years, it was perhaps inevitable that we would get around to devoting an issue to the theme of ‘the sacred’. We did so knowing that we could not keep a safe distance. This would not be a book ‘about’ the sacred, as though it were a topic to be taken up and examined at arm’s length. Rather, we had to risk bringing our own experience, our beliefs and doubts, to the work – and to ask this of those who worked with us to bring this book into being. As you follow us into these pages, the path will take you along the wild edges of belief, through the dream-space of myth and down the back alleys of history. A cave mouth stands open: enter it and you may find an entrance to the underworld, a philosopher’s allegory, or a woman who sits in meditation. The book itself becomes a space in which sanctuary is offered to parts of ourselves which we grew up learning to suppress.

Yet it was not without caution that we set out on the journey of this book. Within the Dark Mountain team, there were those for whom this theme awoke uncomfortable resonances, echoes of an architecture of power and control. It is not the job of a journal like this to be comfortable, but it matters to us that, among the voices gathered in these pages, you will find those who write as atheists or who view the language of the sacred with suspicion, alongside those who stand within particular traditions of belief.

No one here is out to win converts. The hour is late; there are more pressing tasks than trying to settle old quarrels. Whatever common ground we find, let us take it as a starting point.

The call for contributions to this book began with the story of ‘the devil’s door’, an architectural feature found on the north side of old churches in parts of England. Often bricked up in later centuries – and covered over with stories about its use that don’t quite make sense – it seems the original function of this door was to provide an alternative entrance for use on those occasions to which the priest was not invited. Early churches were generally built on sites already held to be sacred and old traditions die hard.

For us, the devil’s door came to stand for the strangeness of the past, the afterlife of supposedly obsolete beliefs and practices, the pragmatic compromises by which ground-level coexistence comes about, and the way that different stories can hinge on a shared experience that a particular patch of ground is somehow special.

Having opened that door, we found that many doors were opened to us in return, leading down corridors and tunnels of human experience and across all sorts of landscapes of the sacred. Even more than with the usual tide of submissions to Dark Mountain, we had the sense that people were sharing parts of their lives that mattered deeply, that were hard to put into words, and yet demanded to be written about.

The material we received far exceeded what this book itself could encompass – more about that, as this series continues – but we chose twelve proposals to be developed, and collaborated closely with the writers over the months that followed as they turned these proposals into the texts you are about to read.

Meanwhile, the architectural symbolism already suggested by the call became one of the themes that runs through the book, from the walls and fences of Sara Wolcott’s ‘From the Darkness’ to the temple at the heart of Michelle Ryan’s ‘Kedernath’ and James Nowak’s cautionary invocation of the ‘corpse doors’ found in old Icelandic texts and buildings. This, in turn, suggested the title of this issue: SANCTUM, a sacred space, a structure within which the sacred may be found.

Any issue of Dark Mountain is the work of many hands. In the case of this issue, we have broken with our usual practices in almost every part of the process, and this has demanded a particular commitment from contributors.

In place of the usual call for finished work, we asked for proposals, and our writers – some of them experienced, others published for the first time – then worked to a demanding schedule to turn what we had glimpsed in the brief summaries they sent us into sustained texts. While they got to work, our art editor Thomas Keyes was convening a team of collaborators who would bring letters and images to the book, drawing on the traditions of the graffiti team and the monastic scriptorium. We have given Thomas space to introduce their work for himself, but the huge collective effort which he and they have made deserves acknowledgement here.

And then, as you may already have noticed, we found that someone else had taken refuge in this SANCTUM: an unexpected voice which winds its way through the symmetry of our structure, breaking through into a thirteenth piece and claiming the final word. For summoning her, we thank our Marginalians, Sylvia V. Linsteadt and Rima Staines.

The result is a singular book which departs from the familiar forms of Dark Mountainin its contents, in the process by which it came about and, not least, in its design – for which we are grateful to our longstanding collaborator, Christian Brett of Bracketpress.

The journey here has been as inspiring and exhausting as any pilgrimage. We have been changed by the experience. As you follow in our paths, we hope that you in turn will find sanctuary, surprise and inspiration within these pages.

Image: Cover for SANCTUM by Thomas Keyes, the art editor and lead artist for this issue. In the next post in this series, Thomas will introduce the process by which the artwork for this book came about. 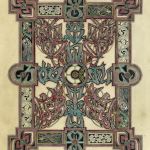 You’ll find more where this came from in our latest book.

You can order a copy of Issue 12 from our online shopfor £18.99 – or for a special rate of  £9.99, if you take out a subscription to future issues of Dark Mountain.