It’s been pointed out countless times that humankind’s current ecological crisis stems from our conviction that we’re apart from nature. Scott Brown’s book Active Peace takes a closer look at what lies beneath this mistaken belief, which he contends has deeply wounded all of us psychologically. Brown has a background in psychology, spirituality and emotional healing, and he brings these perspectives to bear in exploring the inner healing he says we all must do to face the future ahead of us. Written for a general reader, his book begins by laying out the basic dimensions of our predicament and the habits of thought that perpetuate our self-destructive, “life-denying” behavior. From there, Brown proposes a path to restorative justice and provides detailed exercises for those who choose to embark on this journey.

Active Peace explores the illusion of separateness at great length, identifying it as the culprit behind all the violence in the world. Brown submits, quite reasonably, that if everyone were to awaken to the interconnectedness of all things, we would no longer be able to rationalize killing one another or the Earth. Everyone would know that to harm another being is to harm part of oneself. Thus what’s needed, in Brown’s view, is a shift in consciousness that brings us to an awareness of our “interbeing” (to borrow a term coined by Buddhist teacher and peacemaker Thich Nhat Hanh). Some of the tools that can aid us in this endeavor include meditation, philosophical reflection, transpersonal psychology, nature-based practices and sacred activism. 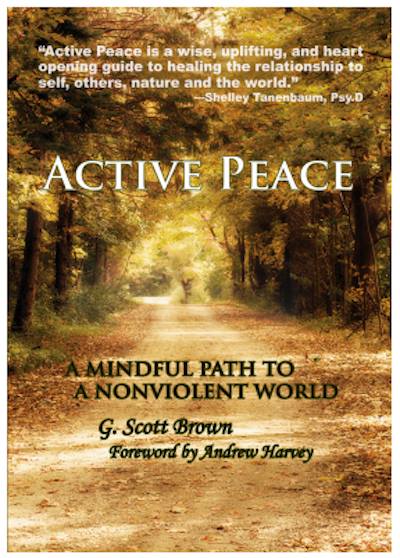 For a volume of less than 200 pages (if you don’t count the notes and other end matter), Active Peace covers a lot of ground, so it’s inevitable that some subjects aren’t going to be explored as thoroughly as others. The topics that receive short shrift are mostly those pertaining to the big picture context against which our interior struggles are taking place—for instance, the threat posed by continued reliance on fossil fuels and the ills of neoliberal growth economics. But I’m not bothered by these omissions, since they aren’t supposed to be the main point of the book.

That being said, I do think it’s a mistake that Brown’s discussion of fossil fuel dependence omits any mention of energy depletion, instead focusing entirely on the environmental and human health aspects of the situation. The depletion issue certainly merits at least an acknowledgement in Brown’s book given that it represents just as existential a threat to the survival of our civilization as do climate disruption and pollution.

The parts of the book that feel the most solidly developed are those in which Brown describes his own personal struggles and how they brought about his present philosophy. He readily admits that when he was younger, he was, in many ways, a case study of the very follies he now decries. He goes on to show how the ideas and practices in Active Peace represent steps he himself had to go through to move beyond his belief in separateness.

Above all, Brown recalls how he once relied on blame, shame, insults and intimidation to influence others—and sought always to be right rather than to find common ground. He gives one especially telling example of this in the book. Twenty years ago, while working as a Greenpeace activist, he was campaigning against a hazardous waste incinerator that Westinghouse Electric Corporation planned to build in Florida. To protest support for the project among Florida lawmakers, he showed up at a state Senate meeting and tried to give out T-shirts with the message “I Sold Out to Westinghouse” emblazoned on them. He also held up a life-size model of a human spine and told the legislators to grow one. Even though the waste incinerator was ultimately defeated, Brown speaks of regretting the tactics he used to oppose it. “Through my protest,” he laments, “I undermined myself on the most basic levels.”

The author confesses that for most of his adult life, he has lacked self-awareness, and that this is largely what caused the us-versus-them mentality he espoused as an environmental campaigner. Self-awareness, he explains, “lays the basic building block for functioning smoothly in the world.” It is key to developing emotional intelligence and also to understanding the habitual patterns of behavior that hamper one’s effectiveness in dealing with others. Brown describes his journey to become more self-aware as an ongoing effort that keeps him open, curious and humble.

In Brown’s view, the ideal of active peace is built on four cornerstones, the first of which is mindfulness. To live mindfully is to pay conscious attention to one’s full experience as a human being. This involves being present in the moment and observing without judging. It’s also crucial to use mindful speech when describing what one has observed. This type of speech avoids labeling people as “good” or “bad” and steers clear of words and phrases like “must,” “have to” and “should.” In addition to promoting peaceful coexistence with other humans and the Earth, mindfulness has many potential health benefits due to its stress-lowering effects. Brown cites research suggesting a link between mindful living and improved brain function and physical health.

Mindfulness also goes hand in hand with the second pillar of active peace, nature-based practices. Nature, writes Brown, is the perfect setting for achieving moment-to-moment awareness. The alienation of humans from nature, in contrast, has caused what Brown terms a “psychic homelessness” that expresses itself in the form of unhappiness and a host of physical ailments, as well as imperiling our continued existence as a species. Thus, Brown argues that one of our most urgent tasks is to make our connection to nature—about which we in the West have become largely amnesic—as conscious as possible. Brown has found that a useful practice for accomplishing this is to spend three or more hours in a calm natural setting contemplating all the qualities about himself that he sees reflected in the other things around him. He provides detailed instructions for readers to follow in undertaking this experience for themselves.

Perhaps the most robust section of Active Peace is one devoted to honing interpersonal skills. Brown is dismayed by what he sees as a woeful lack of knowledge and skill among the general public with regard to communicating effectively and resolving conflict. Nor is he immune from this lack; he admits that he didn’t come across the strategies presented in this part of the book until he was in his mid-40s. Since then, he has amassed an extensive toolkit for creating healthier and more satisfying relationships, a process that begins with the ability to recognize one’s emotions and needs as well as those of others. Brown details the steps required to name feelings and needs, to talk them through with others and to tell the difference between a feeling and an emotion (the former is physically felt within the body, while the latter is more of an abstraction describing a feeling). He also outlines how to develop empathy and deep listening skills, successfully navigate drama-intense situations and transform conflict into opportunity.

The fourth and final foundation for active peace is what Brown calls restorative activism. This form of activism takes its name from the fact that it’s intended to heal not only society and the planet but also the activist. It does so by helping activists let go of ego-driven impulses such as the desire to be right, in control, important or liked by others. It also requires activists to surrender to “the truth of not knowing”—a tall order, says Brown, given how much pressure there is on activists to know what is right and just, what the world needs and so forth. Embracing a state of not knowing allows activists to be more open-minded, less attached to specific outcomes and better able to establish trust and open, honest communication with others. The chief aim of restorative activism is to defeat injustice rather than people, and to this end it completely eschews blame and punishment.

Interspersed throughout Active Peace are roughly 20 “restorative practices” designed to help readers discover their interconnectedness with the rest of creation. These start out basic (for example, setting intentions, walking mindfully) and become more advanced further into the book. The practice that is perhaps most central to letting go of one’s belief in separateness is one titled “Cultivate a Larger Sense of Self.” It involves using meditation to attain the pure awareness that Brown says is every human being’s true nature. Readers are asked to sit and connect with their breathing for at least 30 minutes while also asking themselves a series of related metaphysical questions, such as “Is this the truth of who I am underneath the surface of thought?”

In the foreword to Active Peace, renowned spiritual writer and teacher Andrew Harvey rightly characterizes this book not as armchair philosophizing but as the passionate, pragmatic work of someone who has extensive experience in the things about which he writes. Indeed, Brown has been, among many other things, an environmental activist, wilderness rites of passage guide, youth mentor, meditation instructor and cofounder of the Colorado Center for Restorative Practices. It’s impossible to believe that he has only one book in him—and thus I’m hopeful that this accomplished debut will prove to have been merely the first installment in a body of exciting, thought-provoking work.