On the first week of February 2022 a photo-exhibition – called ‘Reframed’ – perhaps the first of its kind was displayed at Chennai. Pictures taken by six young people who hail from North Chennai were put up, telling stories of work, play, joy and mourning from this region. It held a mirror to the realities of justice and equality in an industrialized city, and instigated deep reimagining.

These six youths were students of Zenith learning centre founded by Ali Basha. He walked out of school in his grade 10 and began working in the meat export business. With his savings he has been running Zenith for the past 22 years – its intention being to help children of North Chennai in academics, provide good nutrition – and for the older students, teaching them the skills and tools of civic engagement. In Thiruvottiyur, where he stays, he says that most children go to school only for the midday meal. And the challenge that children in the fisher community face is that even if they do well in academics, they have difficulty finding dignified employment due to the prevalent caste segregation. So, schooling at the most takes care of one meal’s nutrition, but does nothing to break the social-trap or in equipping young people to do so. Ali Basha intends to shatter this. Most teachers at his centre are his alumni. In all the environmental campaigns, climate strikes and social justice protests in the city, you will see Zenith children at the forefront, coming up with the most creative ways of using art, models, and performances to show their resistance. 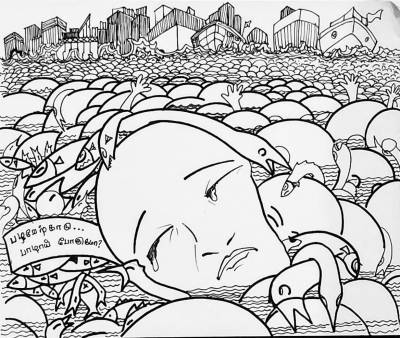 This nexus in human history I narrate often to my senior students. Colonization, western science, industrialization, and educational institutions evolved together, and worked in tandem towards the same interests. The same powers which colonized native lands, polluted the oceans and rivers, also invented mainstream educational institutions. So, it shouldn’t be surprising that schools in much of India treat children like inert material, like bauxite to be ored, molded and produced for the larger economy, controlled by modern-archons. Their syllabi expect the same things from an urban privileged child and as it does from the dalit child in Thiruvottiyur under every socio-economic disadvantage possible. These systems have somehow infiltrated modern imagination and have continued to plague lands, waters, and people.

This is of course the case with Chennai as well. In the colonial past of Chennai city, the North was called ‘black town’ by the British, where historically marginalized communities along with working class people were segregated from the privileged South. All the dirty factories were set up in the North – a highly watery landscape where the Kosasthalayar river flows, spreads out and meets the sea at various locations. It’s a place rankly unsuited for industrialization, but it took place out of what can be described as ‘discriminatory development’. This history of segregation continues starkly till today, on either side of the Cooum river – as if present politics simply borrowed the colonial mindscape. All of Chennai’s red category industries – thermal power stations, mega-ports, petroleum refineries, fertilizer factories, etc continue to be built in the North. While the South remains superficially clean and unaware.

The Reframed exhibition showed this reality in a powerful and thought-provoking way to the rest of Chennai, and triggered conversations around it.

End of last year I was at the Kaladipettai government school in Thiruvottiyur, North Chennai. To explore if it was possible to create a coastal curriculum for children here, whose skill-building around literacy and numeracy could be linked to their home beach. But realities there obliterated the ideas I went with. This neighbourhood, immediately North of the Chennai port, is one of the highest eroding areas on the Indian coast. Between Thiruvottiyur and Pulicat – a 30 km stretch – the sea enters/erases 3m to 50m of land every year, triggered by large coastal infrastructure. As you drive down here the ocean slaps away right by the roadside without any buffer. It is quite an unsafe coast to walk on. Geeta, the headmistress told us stories about this landscape’s past. When she was a child her grandfather – a fisherman – would take her walking on the large beach which would be over a kilometre wide. Her small feet would begin aching before she could actually wet them in the waves. Geographically speaking, North Chennai in the absence of anthropogenic activity, is supposed to have very wide beaches. Beaches are made by rivers depositing sediments at their mouths over millennia, which is ground down by waves and distributed by longshore currents. Thiruvottiyur is in the floodplains of Kosasthalayar, Chennai’s largest river – about four times as big as Adyar and Cooum rivers put together. I asked about the headmistress’ experience as a teacher in this difficult landscape. She said that in 2006 her school had 450 children which then reduced to less than hundred because three fishing villages were resettled far away from here as their home beaches were eroding away. 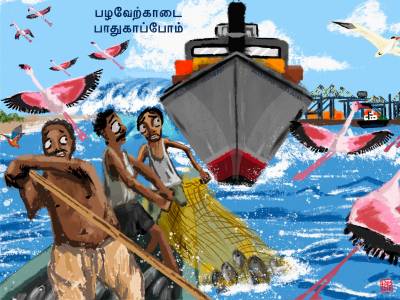 Today those places are nearly half a kilometer in-sea. And the children displaced by infrastructure induced erosion had to resettle dozens of kilometres away, without access to a school. Once, around a decade ago, she heard a big explosion near the school. The teachers and students ran out to find that a massive chunk of road and surrounding land had collapsed into the sea. Kaladipettai school is locally known as Mun school – Mun in Tamil meaning mud – referring derogatorily to the children here as dull. A fast-eroding coast was impacting and interwoven into every aspect of people’s lives, stories, and children’s learning here. Eroding was also identities, ancestral beaches, childhoods. I asked her at the time, ignorantly, if there was a beach at least somewhere nearby where we could take children on shore walks. She told me – “most of my children here haven’t experienced a beach growing up. They think beaches are there only in the posher neighbourhoods of South Chennai”.

One more megaport – 6111 acres large, converting over 3000 acres of river and ocean into land – is proposed North of the city in the village of Kattupalli now by Adani. It threatens to erase the Pulicat lagoon from the map – India’s second largest brackish water body supporting tens of thousands of subsistence fisherfolk and extraordinary bird and marine life. It would turn an entire landscape into a fleet of ‘development-refugees’.

In 2021, with the Class 11 children of Abacus Montessori School – where I run an Earth-Farm-Society programme – we began an inter-school movement across Chennai to save the Pulicat lagoon from mega-port project. They ideated and executed various ways of gathering public awareness. They visited Kattupalli and spoke to fisherwomen – who had been thrown out from their lands thrice in their lives by different port-builders and all their ancestral beaches were far into the ocean. Children from this side of the city saw such grave realities for the first time, understood the impending ecological destruction, and listened to woes which they never knew could exist. Then they set off on their campaign over the next few months. One of their initiatives was collecting around 500 endorsements of students from over 50 different schools and colleges in a letter to the Chief Minister and other authorities, requesting them to reject the port proposal. Many others made powerful art. We held a press conference around the children’s campaign to save Pulicat. It had such an impact that the district collector cancelled Adani’s public hearing that very day, expecting a massive public turnout.

The children who participated in the campaign shared later their surprise on how actually they could make a significant difference if they came together, researched and planned something over a few months. A first experience for many sixteen year olds to exercise their civic and political agency, and deeply feel they could make a change. Something I went back thinking about too.

Here’s how anybody’s emancipation is crippled by mainstream education. It has been shown that a world expert at something needs about 10,000 hours of practice in their field. Applying this analogy differently, through schooling and college, calculating from around grade 1 , a young human being is made to practice between 12,000 to 15,000 hours of obedience and passive-sitting. Which means young people practice for significantly over brain-shaping, life-shaping duration sitting at a desk, shut away from the real world, ‘following instructions’, preparing for tests/exams, being told what to learn, accepting coercion, overworked, and stressed. One should expect that most people who pass through this system come out as (world) experts at passivity. Why will they question or care if a forest is being cut, a coast is being erased, or if a village is being ousted for a highway? This systemic-conditioning happens when the person’s nervous system is in its most formative time when they are young – when they adopt their values, world-views, and their place in society. 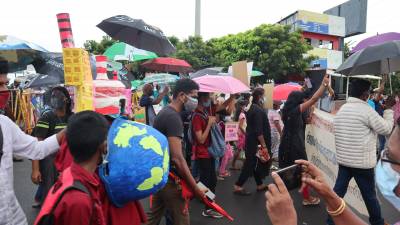 In the coastal hamlets of Urur and Olcott Kuppam near the Adyar estuary, we have been documenting a different kind of erosion – the erasure of the native oceanic language and a knowledge-system held by artisanal fisherfolk. In Chennai fisherfolk use nine different words for winds (kaatthu), four for currents (karsala), three different ocean-habitats (thara, parai and seru) and numerous for seasons, weather, place-names in the ocean, marine species, their behaviour and growth stages. This erosion is born out of how school-education narrowly treats knowledge and de-recognizes embodied and emplaced ways of knowing. Palayam Anna, my teacher among other fisher-elders like Arumugam anna, Kasinath anna, have taught me more about the ocean and coast than all the academic literature I’ve gone through on the subject during the course of working on coastal advocacy for the past 4 years. They can stand on the beach at dawn, feel the wind, wave-height and colour of the ocean and tell you the weather, what fish will be caught and how conditions are in the deep ocean. Their bodies are their sextant and barometer. This deep-knowledge, embodied-science and merged-identity with the ocean however is almost absent in fishers under forty or thirty years. Children born here imbibe from school curriculum not to value their ancestral-knowledge and somehow see it as lower-caste.

Inspired in part by the worlds elders in these hamlets have opened for us on the beach, a group of us run an apprenticeship programme for children of the fisher-community. The purpose of this is to make their home-coast, the Elliot’s beach and Adyar estuary, along with other biodiversity areas in Chennai into rich living multidisciplinary learning spaces beyond any classroom. Planned into this are interactions with elders in their community, and academic skills woven into the activities. We have been seeing a tremendous response from children in their intrinsic motivation and curiosity to learn when it is emplaced in their home landscape and is a portal into it. The last field session we had was on common snakes of Chennai, rethinking our attitudes towards them and followed by a walk with the Irula tribe in Vadanemmeli village who showed us how they track snakes in the wild. Through this apprenticeship we are learning how and trying to dismantle, and hole-riddle conventional ideas of what knowledge is, where knowledge-making happens, what learning means – even for academic objectives of school syllabi. 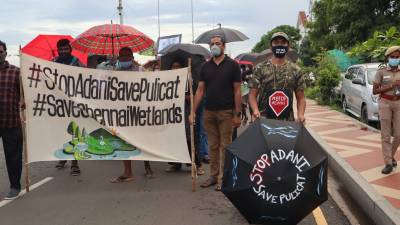 To begin imagining in that direction is to take action daily in the dismantling of the current values of education. These continue to be competition, one-upmanship, a factory to create employees for economic powers and perpetuate segregations of class and caste. This structure needs to be completely hole-riddled. The role I see for us as educators is that of termites, thoroughly burrowing into the rotting architecture of the present paradigm.

In other words – let’s give every drop of our sweat and spirit into pondering and practicing – making civic and political engagement/reimagination a core value in our teachings.