A landmark book which argues neoliberal free market policies have arisen as a deliberate strategy of ‘shock therapy’, exploiting national crises to enact questionable policies while citizens are too distracted to resist effectively.

Though written 15 years ago, ‘The Shock Doctrine’ still has a lot to tell us about events today. It charts how a radical lobby created the neoliberal economic model which dominates the world; how that model was introduced from the 1970s; and how it was supercharged after the Millennium through natural and deliberately manufactured ‘disasters’.

The key to understanding this process is the rise of ‘disaster capitalism’. As Klein states:

“It was in 1982 that Milton Friedman wrote the highly influential passage that best summarizes the shock doctrine: ‘Only a crisis – actual or perceived – produces real change. When that crisis occurs, the actions that are taken depend on the ideas that are lying around. That, I believe, is our basic function: to develop alternatives to existing policies, to keep them alive and available until the politically impossible becomes politically inevitable’… Friedman’s model of influence was to legitimise ideas, to make them bearable, and worth trying when the opportunity comes.” 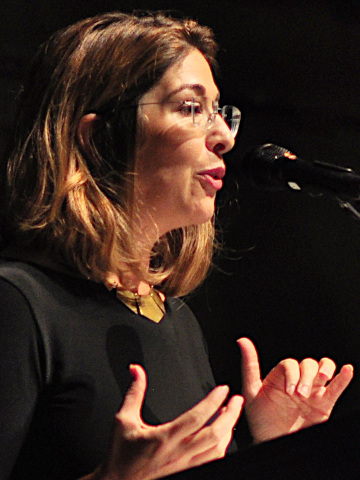 The leaders in this process are ‘think tanks’. Fuelled by Cold War hysteria, the first think tanks fed Western states’ desire for technical responses to geopolitical threats; but over time that morphed to promoting a political framing of economic and social issues. The neoliberal think tanks, while providing pseudo-academic support for policy, seek to maintain its core political ideology as Friedman outlined – creating a largely anonymous path between the funding of the super-rich and corporate lobbyists, the ideas they wish to promote, and the politicians and mass media they want to influence.

“[They] did not see Marxism as their true enemy. The real source of the trouble was to be found in the ideas of the Keynesians in the United States, and the social democrats in Europe… Much of this purism came from Friedrich Hayek… [who] warned that any government involvement in the economy would lead society down ‘the road to serfdom’… ‘The Austrians’, as this clique-within-a-clique was called, were so zealous that any state interference was not just wrong, but ‘evil’…”

Their focus was as much against liberal Western society as it was the ‘communist’ East; expressed not simply as being anti-left, but more broadly against even centrist values and liberal social movements. Today’s criticism of racial-bias or patriarchal values across society sees a similar response from these groups today as they stoke, ‘The Culture War’.

Klein also links the foreign wars of the military-industrial complex to the abuse of human rights ‘at home’. Key amongst these examples is the work of psychologist Ewan Cameron, and his extreme experiments in Canada for CIA-funded ‘psychological warfare’ programmes. Klein draws parallels between the rise of Friedman, and his promotion of neoliberal economics, with Cameron’s systematisation of torture for the CIA:

“Where Cameron dreamed of returning the human mind to that pristine state, Friedman dreamed of de-patterning societies, of returning them to a state of pure capitalism, cleansed of all interruptions… Also like Cameron, Friedman believed that… only ‘bitter medicine’ could clear those distortions and bad patterns out of the way. Cameron used electricity to inflict his shocks; Friedman’s tool of choice was policy – the shock treatment approach he urged on bold politicians for countries in distress.” 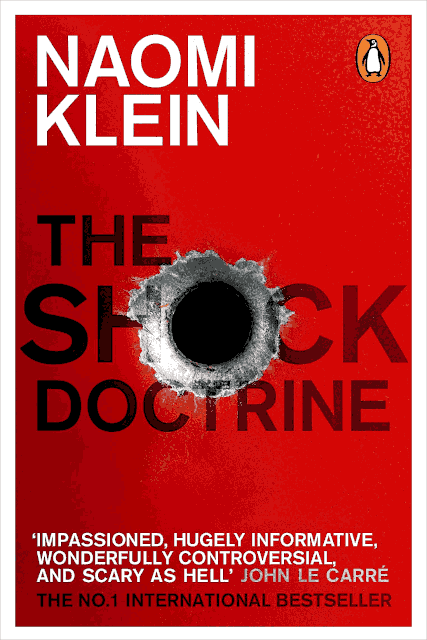 The book links the rise of this economic ideology to the Western-engineered coups in Chile and other states; and how, through international institutions, this ideology became a form of ‘neocolonial’ control. Specifically, in terms of Klein’s approach to writing the book, how this ideology saw its height with, ‘The War On Terror’:

“Chile’s coup… would feature three distinct forms of shock, a recipe that would be duplicated in neighbouring countries and would re-emerge, three decades later, in Iraq. The shock of the coup itself… Friedman’s capitalist ‘shock treatment’… The other was Ewen Cameron’s shock… now codified as torture techniques in the Kubark manual…”

“From Chile to China to Iraq, torture has been a silent partner in the global free-market crusade. But torture is more than a tool used to enforce unwanted policies on rebellious peoples; it is also a metaphor of the shock doctrine’s underlying logic.”

Universal human rights and democratic values exist in opposition to the libertarian economic values promoted under the ‘Shock Doctrine’. The loss of democratic control as billionaires influence policy, as well as worsening conditions as those policies accentuate inequality, represent the same – albeit less extreme – values promoted in the CIA’s coups of the 1970s. In this sense, the persecution of ‘the poor’ in Western states represents just another form of economically coercive ‘torture’.

Klein develops this link over the final chapters of the book:

“In December 2006, a month after Friedman died, a UN study found that ‘the richest 2 per cent of adults in the world own more than half of global household wealth’… the counter-revolution that began in the basement of the Social Sciences building in the 1950s has indeed been a success, but the cost of that victory has been the widespread loss of faith in the core free-market promise – that increased wealth will be shared… ‘Trickle-down economics didn’t happen’.”

The role of think tanks and lobbyists four decades ago has become normalised in contemporary politics – exemplified by events such as the farcical rise and ‘trickle-down’ premiership of Liz Truss. And today the ‘Shock Doctrine’ is driven as much by Silicon Valley billionaires, promoting digital platforms and the gig economy, as it is the interests of traditional Western foreign policy. 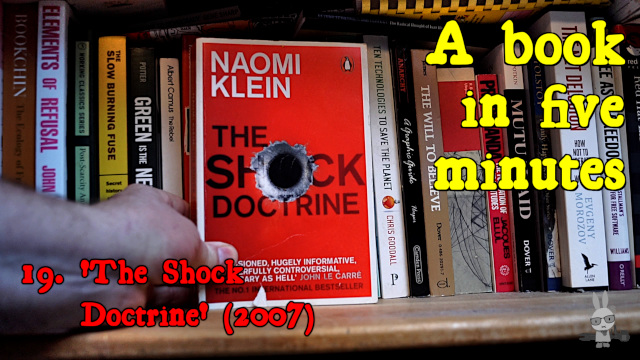 Reading this book today it’s possible to see the process it maps-out at work all around us. Of course, identifying that is only the first step; allowing everyone to understand this process is critical to countering its attack on our freedoms and economic well-being. That is why, fifteen years on, the book is still worth reading.