If you had the option of a four-day work week, would you use some of your newly freed time to pitch in at a community food garden in exchange for a share of the produce? How about putting your tools in a common shed for sharing if you could occasionally borrow your neighbors’ appliances? Would you forgo summer destination flights if you knew that more public pools and nature parks would open in your region?

You might describe such lifestyle choices as climate-conscious or anti-consumerist. Maybe you already practice some of them yourself—but what will it take to make such shifts, and the values that inform them, widely accepted in a country like the United States? 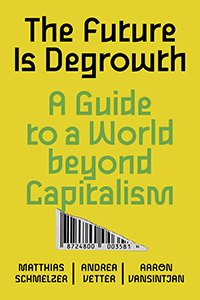 That’s the vital concern running through The Future Is Degrowth: A Guide to a World Beyond Capitalism. Since the book’s first edition was published in Germany in 2019, the world has been reeling from continuous shocks: a global pandemic, social upheavals, heatwaves, wildfires, and war, compounded by cost-of-living crises, supply chain delays, and food shortages. As Matthias Schmelzer, Andrea Vetter, and Aaron Vansintjan explain in this new and expanded English-language edition, people are increasingly drawn to degrowth because they’re seeking answers about “how we got in this mess in the first place, and how we can get out.”

According to the authors, the term “degrowth” is a critique of the dominant ideology of growth in capitalist societies and includes proposals for a radical reorganization of economic life in order to dramatically reduce advanced economies’ use of energy and resources. The writers assert that such a transformation is not only possible and desirable for the world’s richer countries, but is also necessary to tackle climate change through a global, just transition from fossil fuels.

The idea of an abrupt “jump off the growth treadmill” runs against the grain of standard Econ 101 courses and corporate news. Prevailing explanations for the economy in the Global North still hold that growth and a climbing GDP are unequivocally good. But degrowth positions have recently worked their way into discussion from the World Economic Forum and the latest report from the International Panel on Climate Change. The 2007–08 economic crisis, the advancing effects of global warming, and the jolt of pandemic shutdowns have been steadily undermining ideological illusions about economic growth. There’s increasing acknowledgment that billionaires’ wealth doesn’t simply trickle down, that a great deal of modern work is superfluous to social necessity, and that ever-accelerating busyness isn’t getting us closer to a good life for all.

Consider that the average American’s annual material consumption is 23.7 metric tons—52% more than the European average and nearly three times the 8 metric tons sustainability scholars cite as a fair, sustainable global average. Alarms about the excesses of the frequent-flyer McMansion lifestyle are nothing new; still, a degrowth view helpfully foregrounds not only the harmful carbon footprint of this “imperial mode of living” but also its unjust reliance on cheap overseas resources and labor. Skepticism of capitalism’s growth-focused notion of progress allows us to see that a mode of living presented as “normal” was never just or sustainable.

The book suggests that even climate activists and progressive politicians need a reality check. Proponents of degrowth are wary of “green growth,” which hails techno-solutions and vague net-zero goals to suggest that, once a proverbial green energy switch is flipped, the Global North can continue hustling and consuming more or less as before. This single-minded focus on renewables, exemplified by the current posture of the Biden administration, ignores the fact that the supply of rare earth minerals needed for a renewable transition is finite and mostly sourced in the Global South. The authors do advocate a Green New Deal ramp-up of production, but one tempered by degrowth:

“The transformation needed in industrialized countries—if they are to reduce their emissions and environmental impacts fast enough to leave space for the Global South to develop—will also lead to reducing the size of Global North economies.”

The Future Is Degrowth invites us to envision a much deeper societal transition than simply swapping energy sources to maintain the status quo. By recognizing the time and material wasted in capitalist competition, degrowth theory maintains that systems of care and sufficiency can improve our quality of life, offering immaterial gains such as “time prosperity” and “conviviality.”

So how do we actually ditch the capitalist rat race, restructure our lives, and settle into a slower groove? The Future Is Degrowth doesn’t offer shortcuts, but it contains more than a few thought-provoking ideas and examples. The “dual power” strategy the authors advance pairs radical policies of wealth redistribution and selective downscaling of unhelpful industries with the elevation and expansion of “nowtopias.” Self-organized and small-scale initiatives like CSAs, urban gardens, community solar projects, and worker co-ops all have a part to play, showing that the “good life” can be secured without the material waste and alienation endemic to capitalism.

What’s ultimately at stake in a degrowth transition is not simply greener lifestyle choices but complex structural questions concerning millions of lives and livelihoods. What would make oil and gas workers feel good about foreclosing their industries? What conditions might empower a pilots’ union to refuse to fly private jets? What would it take to build majority consensus for a maximum salary or an eco-tax on harmful consumption?

Simply imposing such measures from the top down is a likely recipe for resentment and right-wing outrage. The authors’ most radical remedy is the insistence on degrowth decision-making to expand and deepen democratic practices. If you want people to endorse your eco-revolution, they’ll need a seat at the table. Regional councils and citizens’ assemblies could offer a forum for informed deliberation on economic transition, breaking down partisan bubbles and exercising the agency stifled by the current market-state paradigm. Self-determination and participation, the book compellingly argues, are key to society pulling through climate-induced transition without pulling apart.

Beyond our current “climate versus the economy” paralysis, the promise of degrowth beckons.