On the morning of July 31, 2021, a group of 40 people assembled in the hamlet of Las Margaritas in the sacred land of Wirikuta, in the high plateaus of the Chihuahuan Desert of north-central Mexico. Local farmers in cowboy hats and baseball caps gathered alongside young indigenous Wixárika women and men who had come from their communities in the western states of Jalisco and Nayarit. There were also a dozen non-local and foreign attendees who happened to be in Margaritas or who had put down roots and established homes and working relations in the region.

All had come to Las Margaritas to attend a free intensive agroecology workshop led by Gerardo Ruiz Smith, a Mexican regenerative agriculture expert, and coordinated by the Wixarika Research Center as the first stone of a long-term project that seeks to restore and regenerate the desert in what many have come to call the “botanical garden” of Wirikuta. And as I watched this dream come to life, I was reminded of the symbolic Candles of Life, renovated every year in the pilgrimages carried out by the Wixárika people for whom this land holds a central place in their cosmology. 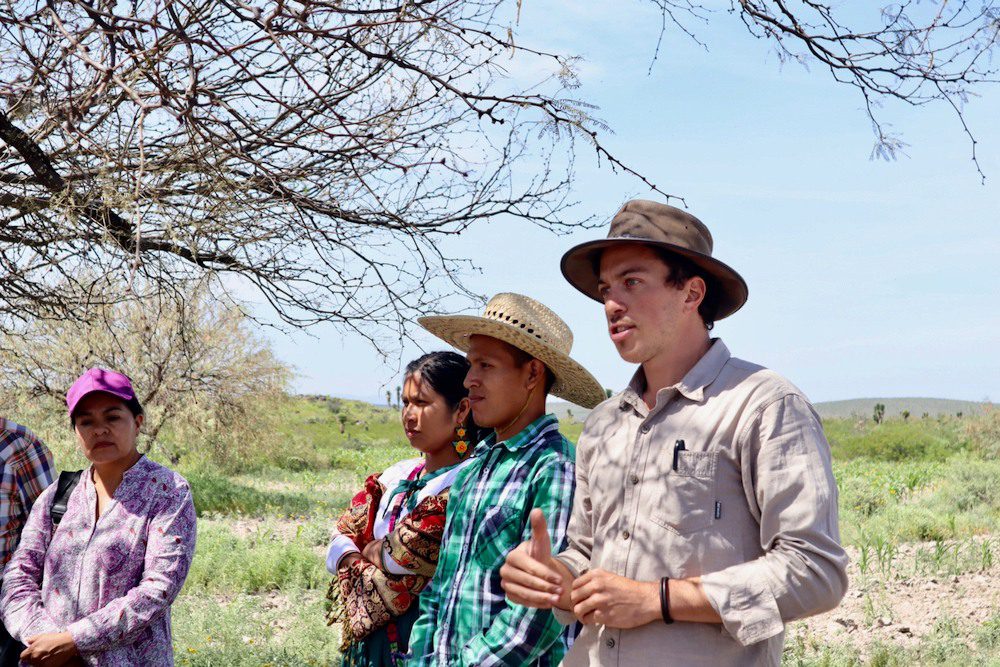 Regenerative agriculture expert Gerardo Ruiz Smith, right, is passionate about bringing back keystone species like the giant mesquite that the group stood under as he shared stories and expertise. (Diana Negrín photo)

Gathered in a circle with pan dulce and a cup of a coffee-like beverage made from roasted mesquite pods, the workshop participants shared their intention for coming from their respective homes and farms to learn about the ways in which mesquite, agave and agroecological integrated milpas, or cornfields, can regenerate degraded soils and reinvigorate the local economy. Farmers shared their desire to build healthier farmlands in the face of the encroachment of large-scale agroindustrial projects throughout the high plateaus of San Luis Potosí, also known as the Altiplano Potosino.

Despite the pandemic’s forceful slowing of life for many people across the planet, big capital projects have undoubtedly found a way to keep on their steady path. While transnational mining has stood as the most visible threat in this region, a multiplicity of industrial projects have expanded across the various corners of the Altiplano, bringing with them a drastic change in land use and accompanying social tensions. While the political and business dealings of these companies attempt to remain opaque, one can find a variety of clues in the landscape.

On a clear night one can see the flickering red lights of the wind farm built by Enel Green Power of Italy in the southwestern municipality of Charcas. The large metallic wind turbines are part of a strategy that marks wind energy as an environmentally friendly mechanism to cut energy costs largely for corporations like WalMart, Cemex and others.  At daybreak one can also spot the multiple greenhouses scattered across the landscapes and the dust whirlwinds that are made when new land is cleared for the next cultivation.

More by Diana Negrín on the situation in Wirikuta:

Across the desert plain in the municipalities of Catorce and Vanegas, there are the two San Juan Eggs industrial farms. Millions of chickens, tens of millions of eggs, and tens of thousands of pigs now are bred and slaughtered in one of the world’s most biodiverse deserts. The debris of these animals’ lives and deaths are then moved to another deforested parcel of land a few kilometers away, attracting a growing plague of flies that gather around the fetid waste and now overwhelm local residents’ homes. Workers—many of them young men or boys—can be spotted in the back of small trucks that transport them to the network of greenhouses, while Huevos San Juan has built worker housing and a church into its walled-off gated facility. 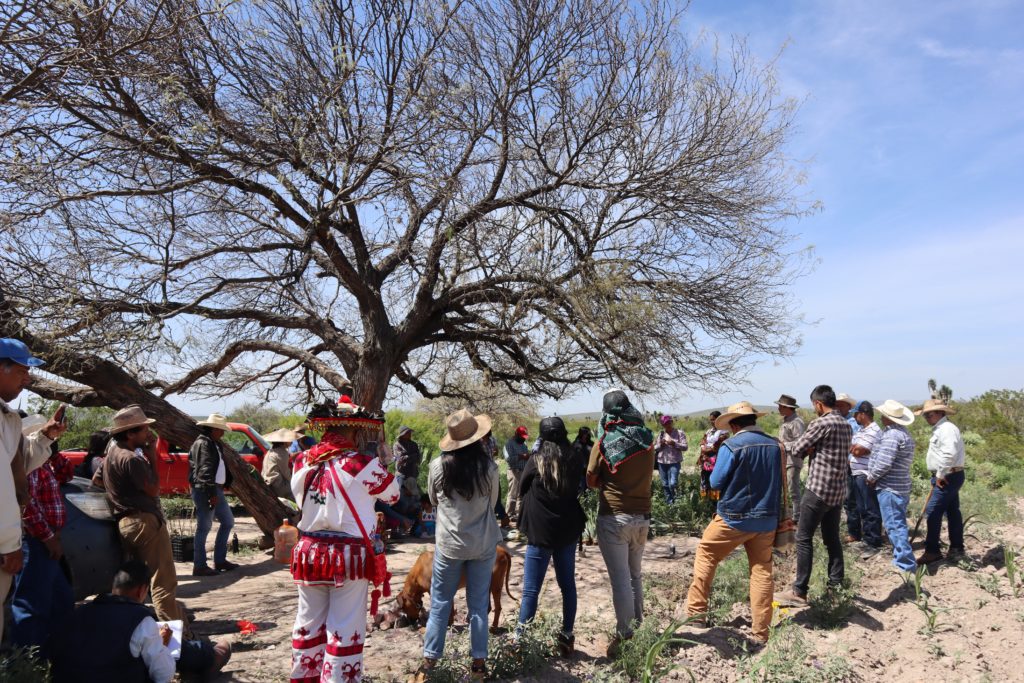 Undoubtedly, among the global culprits of climate change are the transnational mining and agroindustrial corporations, the associated toxic waste dumps, water diversion projects and a so-called renewable energy industry sustained by massive mineral extraction. As the natural green and brown hues give way to metallic structures, local communities are placed between a rock and a hard place. Entrenched poverty and shrinking farm outputs force too many to work for these industries, rent out their land to these corporations, or migrate to find work elsewhere in factories, mines or elite households.

Despite and because of these hardships, many local residents and foreign transplants have remained steadfast in their vision of Wirikuta as a living biocultural oasis. They see the potential to stave off further destruction through the power of restorative practices and the articulation between local farmers, the ancestral roots of Wixarika spiritual and agricultural traditions, and the solidarity of a civil society that can help bridge new and old environmental knowledge. 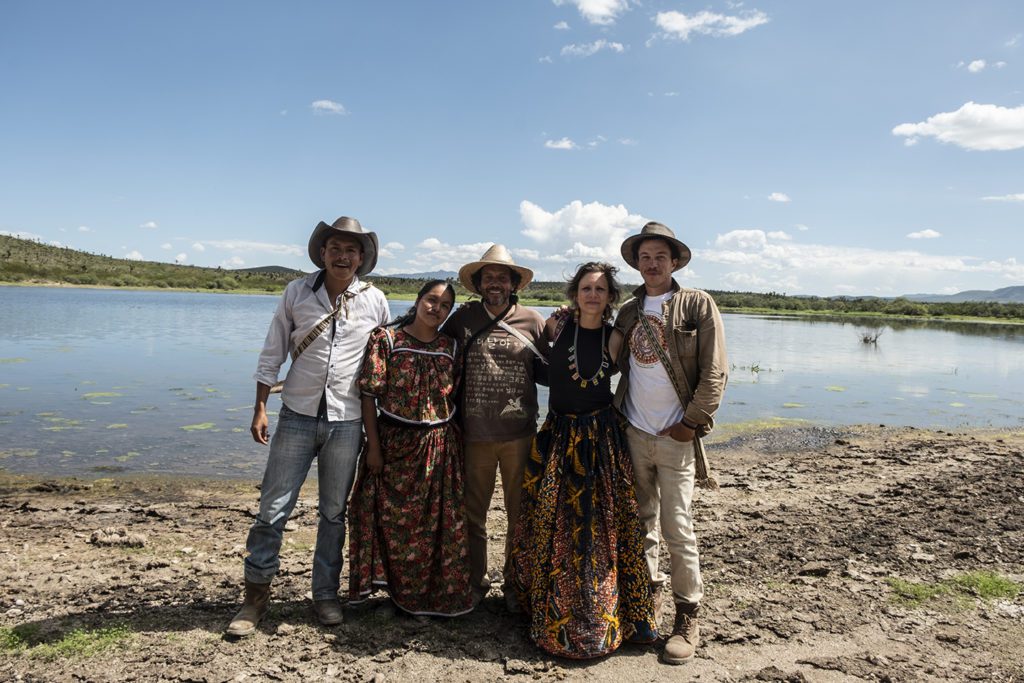 ​​These collaborative opportunities were front and center at the July workshop as new and old friends exchanged their environmental knowledge and best practices intent on the concept of sharing strategies that hold a balance between humans and the natural environment. We moved from our introduction to the aroma of mesquite coffee at the community center, to a milpa, or cornfield, a few kilometers into the dense desert, where water absorption and retention,  agroecological crop management and soil fertility were discussed in detail.

This milpa parcel—a stone’s throw from the sacred place of Our Elder Brother Deer, Tamatsi Kauyuamarie—is the first parcel where Gerardo Ruiz and Eduardo Guzmán (mestizos) along with Carlos Carrillo (Wixárika) did a topographical drone survey to design and implement an alley cropping agroforestry system with 160 mesquite trees and 160 agaves interplanted between strips of corn and beans. 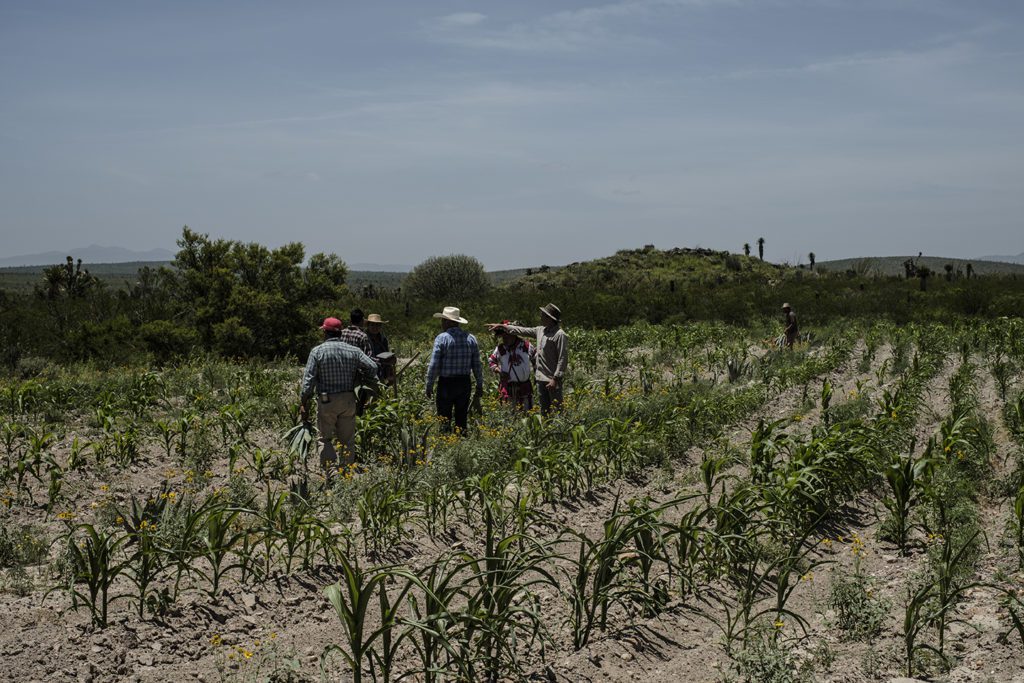 Workshop participants standing in the model milpa with the sacred place of Tamatsi Kauyumarie, El Bernalejo, in the background. Photo by Joaquin Urrutia

This first step directly addresses the often unspoken necessity to reforest this region with an endemic species like the mesquite, which can provide shade and water retention, high quality feed for grazing animals, nutrient dense food and wood. Over the next several years, our team will continue to monitor and work this milpa, while identifying new ones that can be converted to diversified agroforestry systems using these important endemic species.

More about the long fight to save Wirikuta:

At the center of this initiative is the belief that we cannot fully protect the biodiversity of an area like Wirikuta without taking into consideration the cultural and economic aspects of ecosystem protection and restoration. The epistemic insight and empirical know-how of the local farmers and the Wixarika people are fully complimentary in their biocultural approach to this semi-arid geography.

As such, the Wixarika Research Center’s agroecological project has set out to coordinate a network of practitioners, scholars, traditional authorities, local activists and religious leaders to exchange knowledge, build ties and consolidate small production activities. This renewed energy comes after ten years of coalition-building and the successes and failures from earlier efforts to protect Wirikuta from mining and create economic alternatives. With lessons learned and a shared sense of urgency, we believe that the Altiplano and Wirikuta can become an incubator for environmental restoration and economic revitalization that is based on an intercultural exchange and an economic network rooted in solidarity, sustainability and equity. 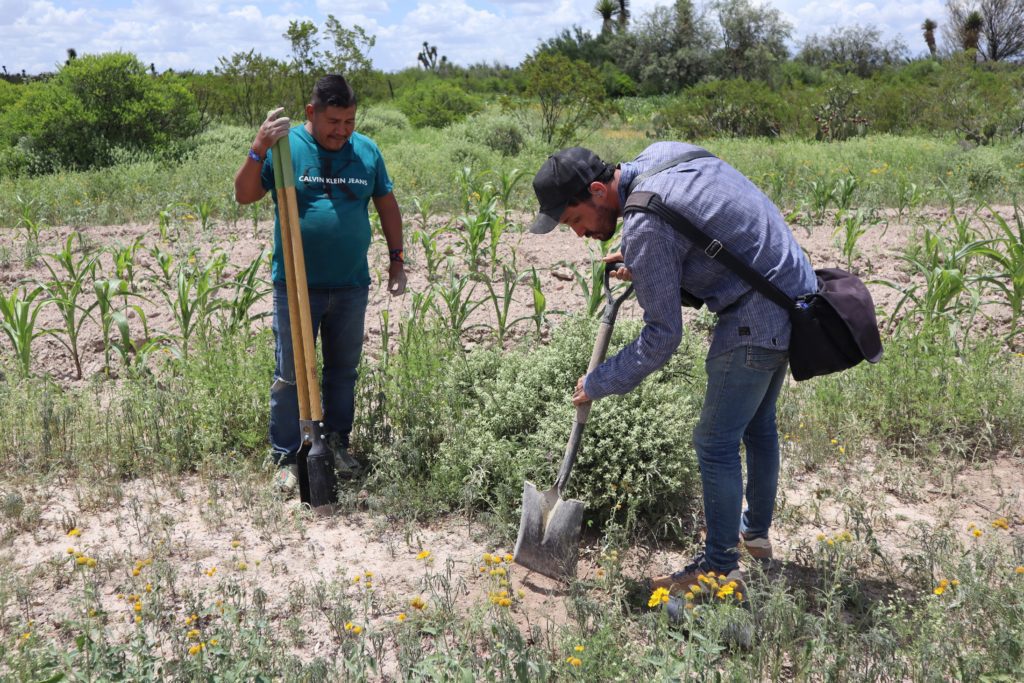 After sharing several hours under the hot July sun, we piled back into the pickup trucks along with the children and dogs that accompanied the day’s activities. A local woman named Angeles, who sells balms, freshly prepared juice and conserves, prepared the delicious local favorite of lamb mole and lamb soup. We savored the meal with tortillas made from mesquite and corn, whose dark brown tone and sweet taste surprised us all.

With our bellies full, we pushed through the final hours of the day’s lesson plan as Gerardo Ruiz showed images of agroecological initiatives elsewhere. His emphasis was on the glorious mesquite—from the ongoing traditional harvests of Sonora’s Comca’ac women to the sought-after kiave (mesquite) honey of Hawai’i. Enthusiasm did not wane as the participants discussed costs and benefits of production and new consumer markets. 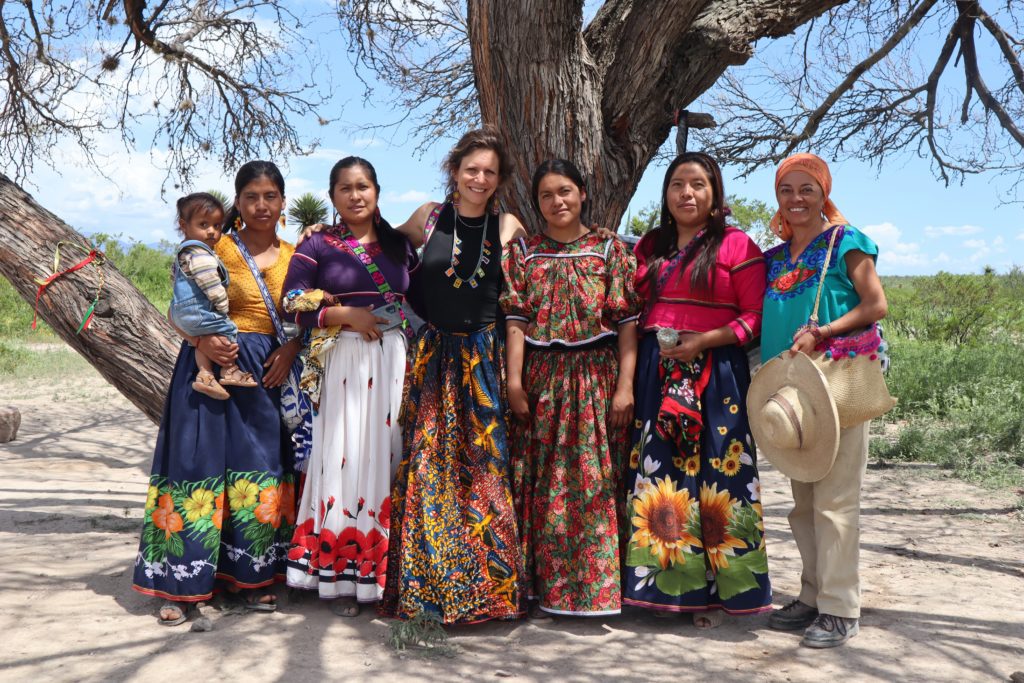 Before the end of the workshop, participants had the opportunity to learn about an innovative technique to transform pruned agave leaves into a high-quality silage, which can be used as animal feed during the dry season. Using a small portable gas-powered mill, some of the participants helped to shred the large leaves into small pieces; this material was later packed and sealed in 5-gallon buckets for the one-month fermentation process to begin.

That evening, I sat with some of the local participants, the organizers and the Wixárika youth, most of whom had never before come to this ancestral pilgrimage place. We made more food, shared a toast and gave voice to our fantasies around the fire for what could be possible if we sustained the seeds that we had planted on this last day of July, 2021.

An oft-repeated chant from the movement to protect this sacred place came to mind as we prepared to take our leave.

Wirikuta is loved and defended. 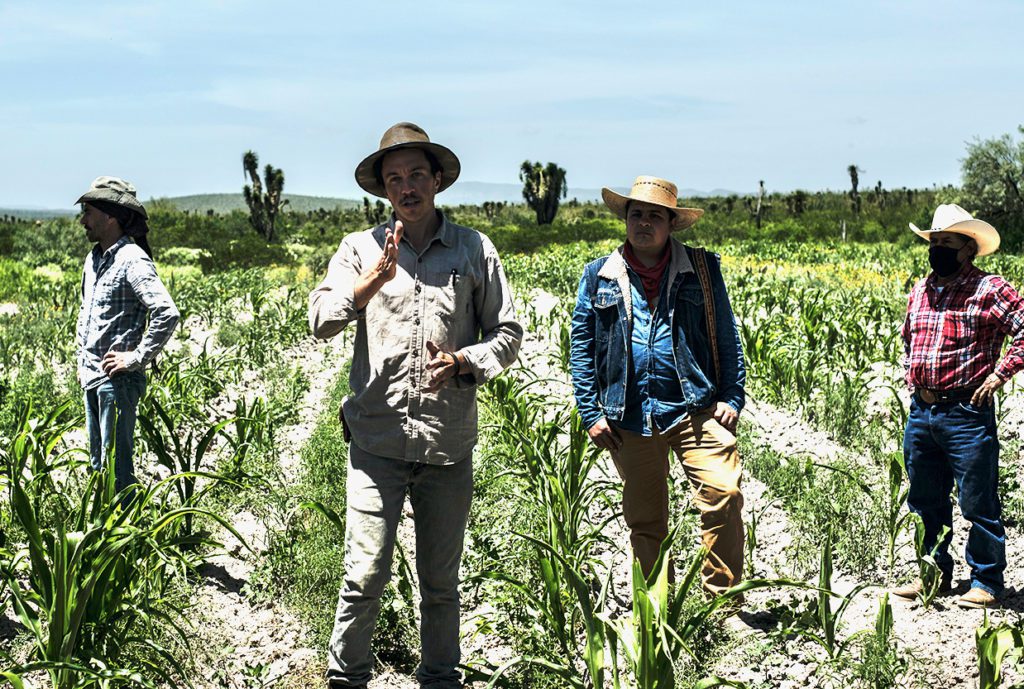 If you like this story and would like to learn more about this agroecology project, please visit our full proposal for our 2022 programming and consider supporting this project with a monetary donation made to the Wixarika Research Center, sign up for our newsletter or join our facebook pages, Wixarika Research Center and Wixarika Cultural Survival. 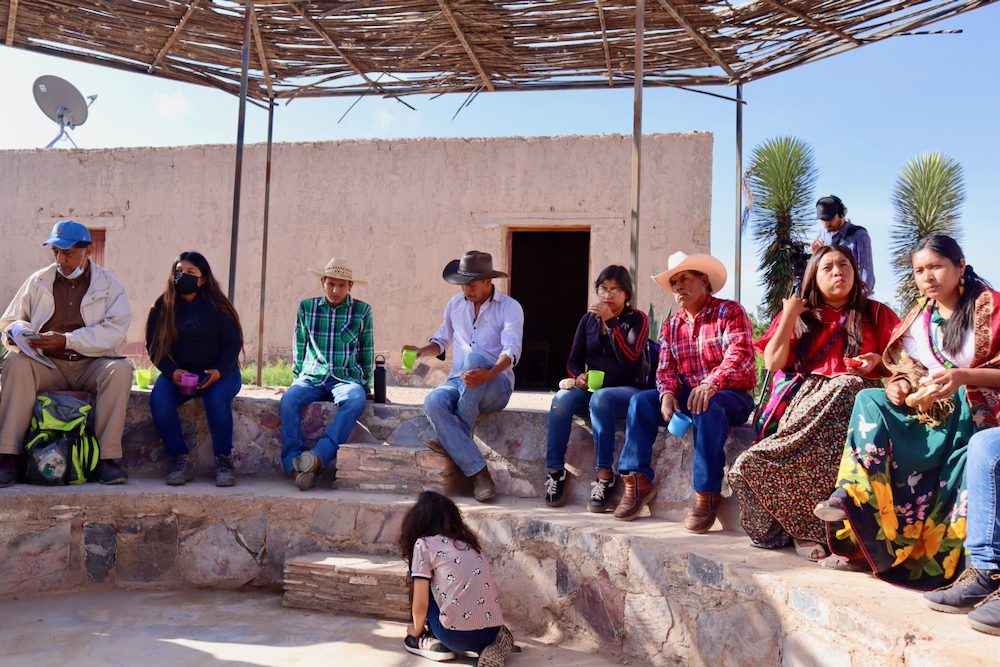 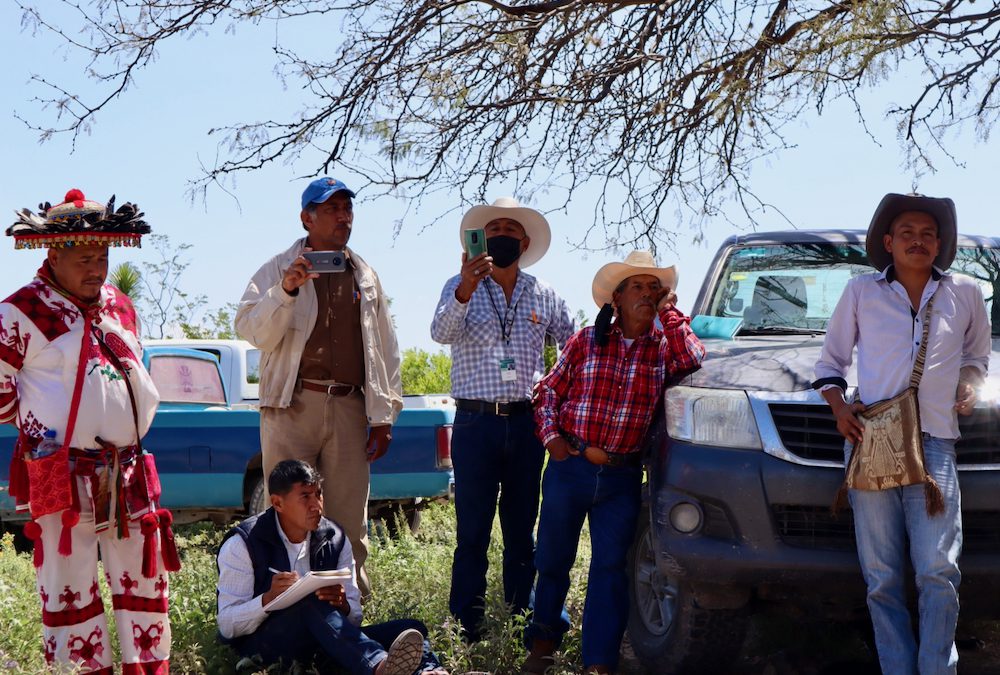 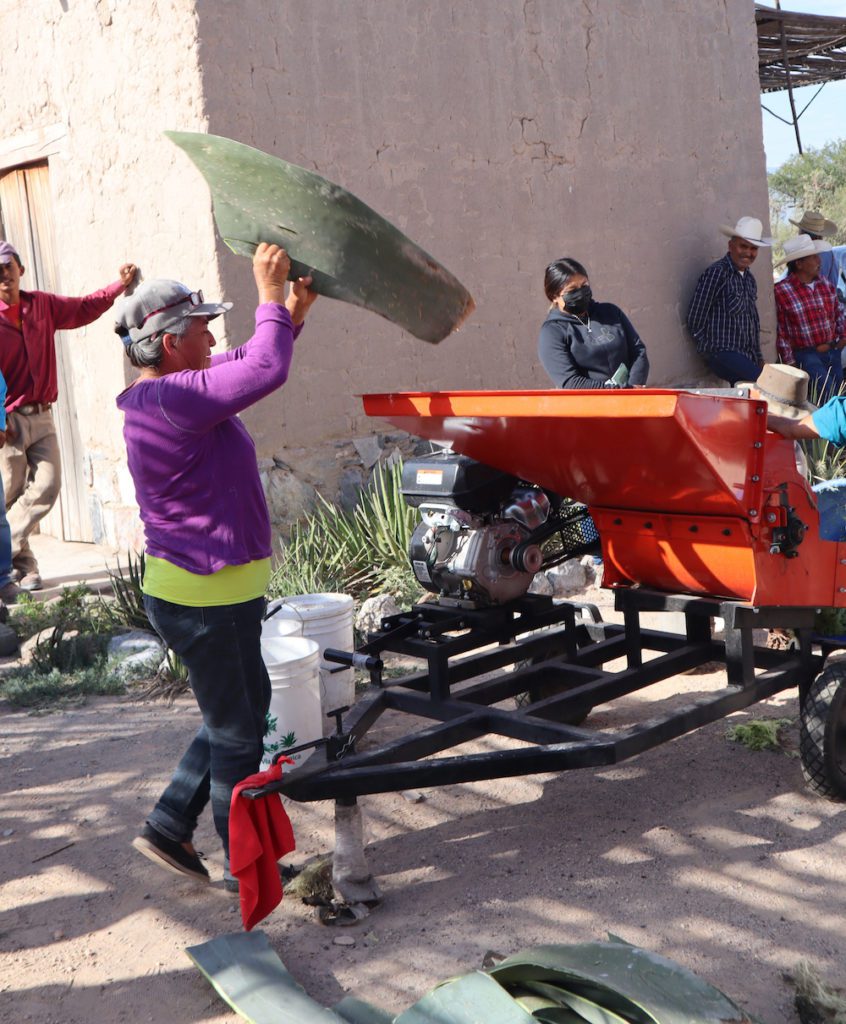 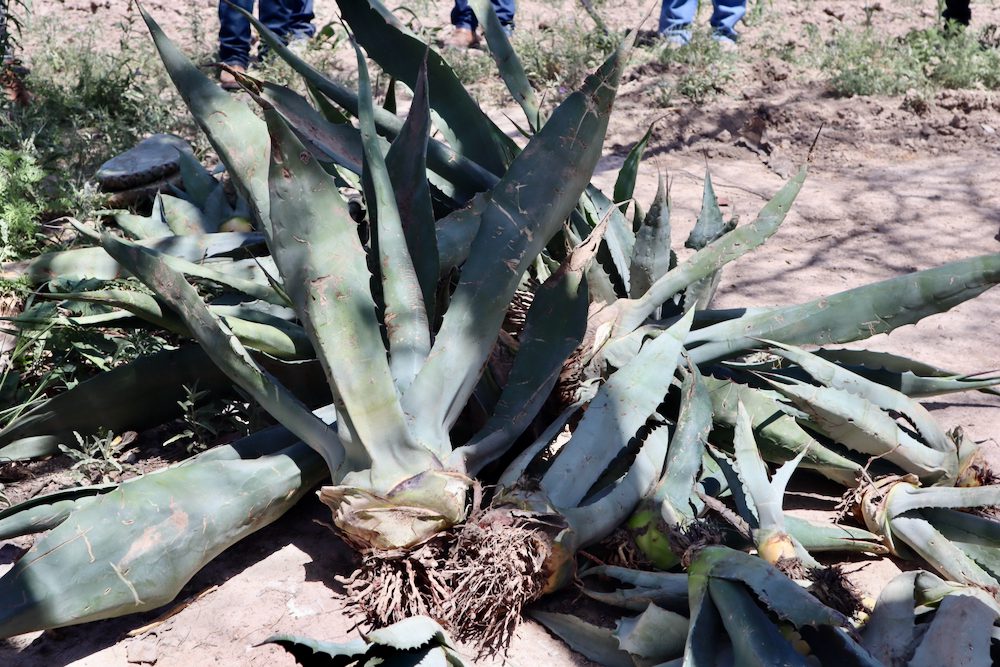 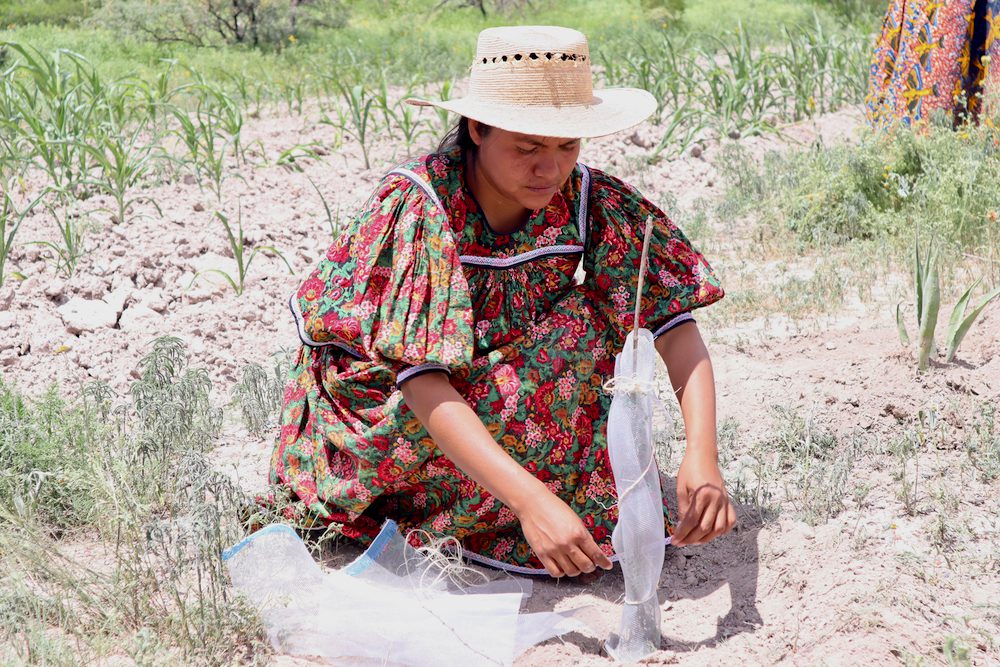 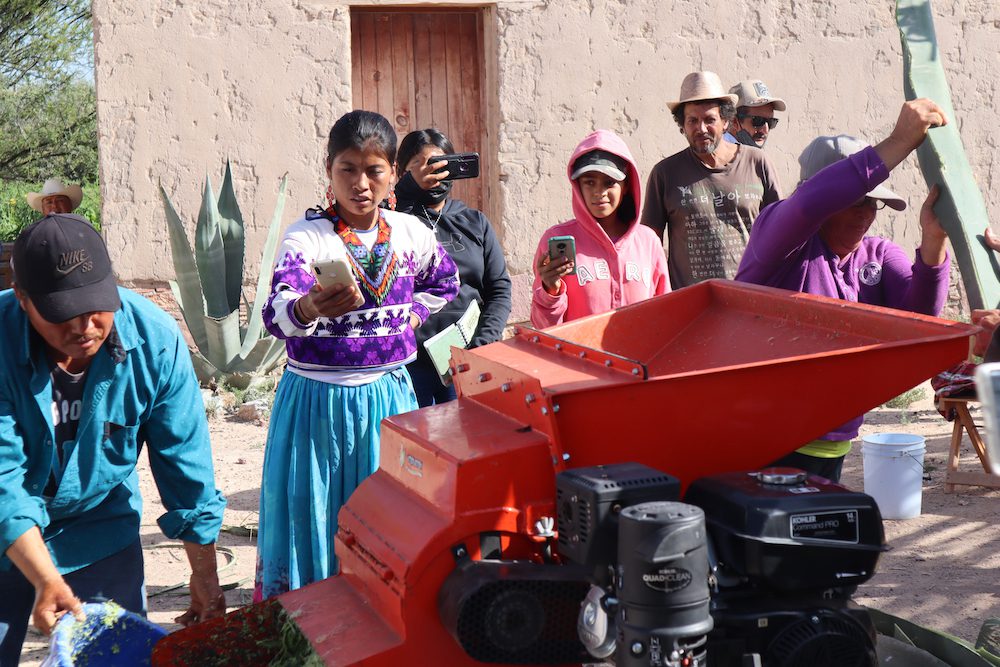 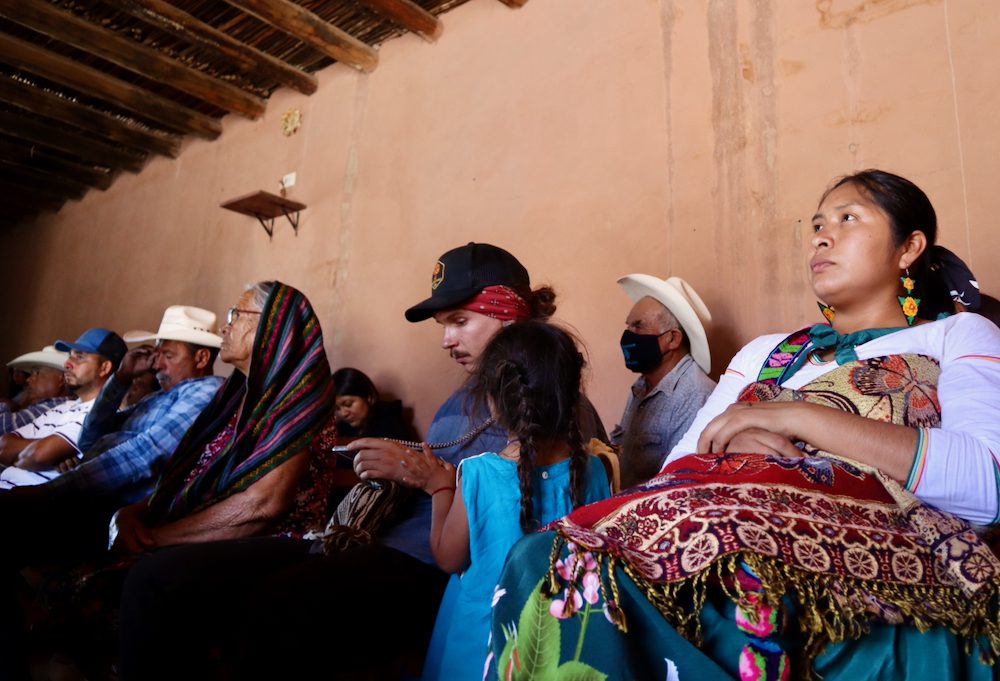 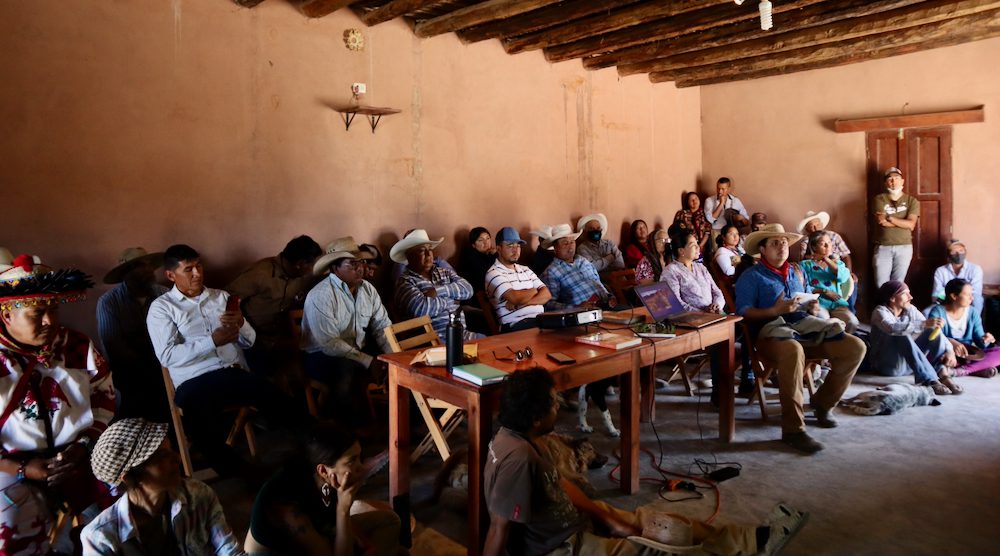 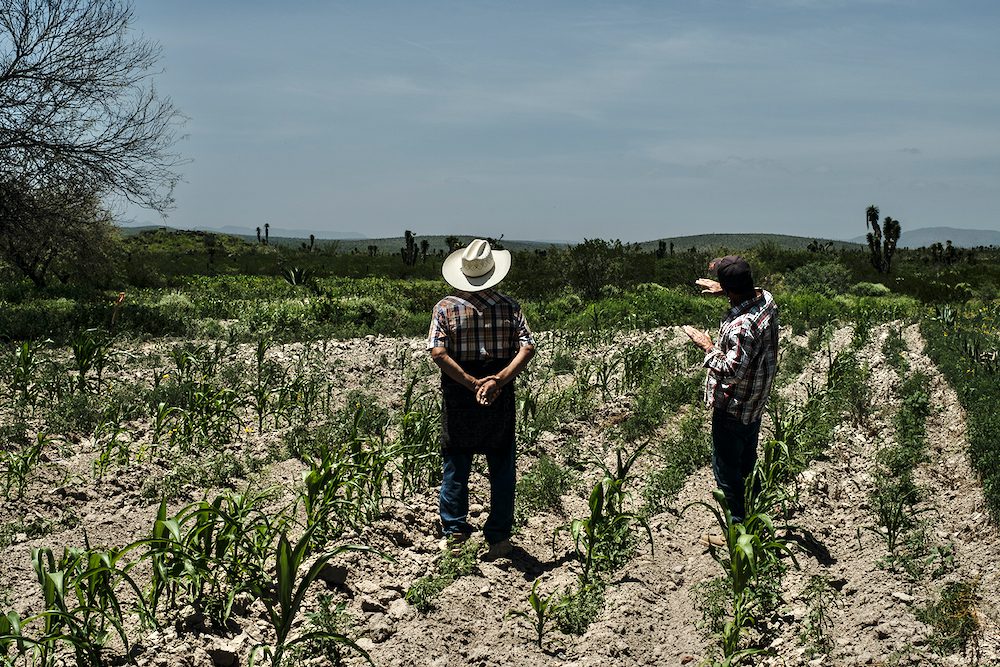 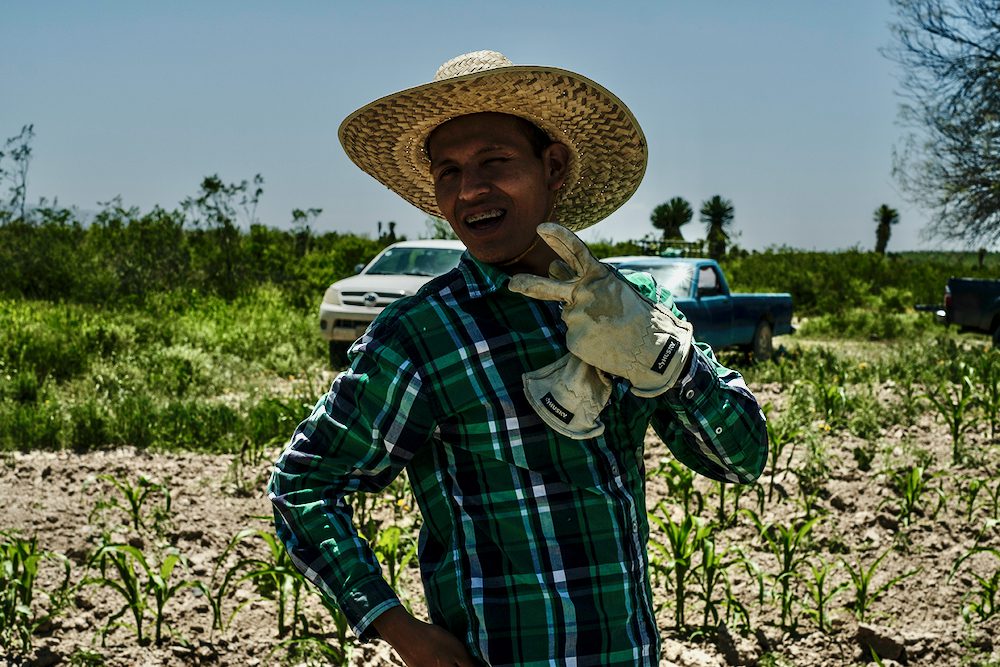 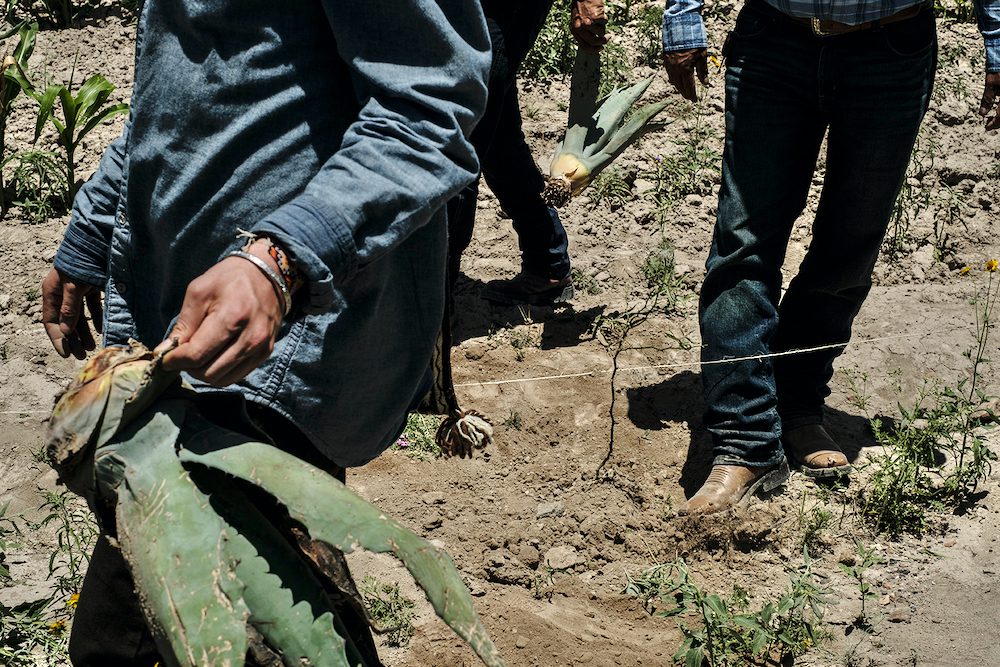 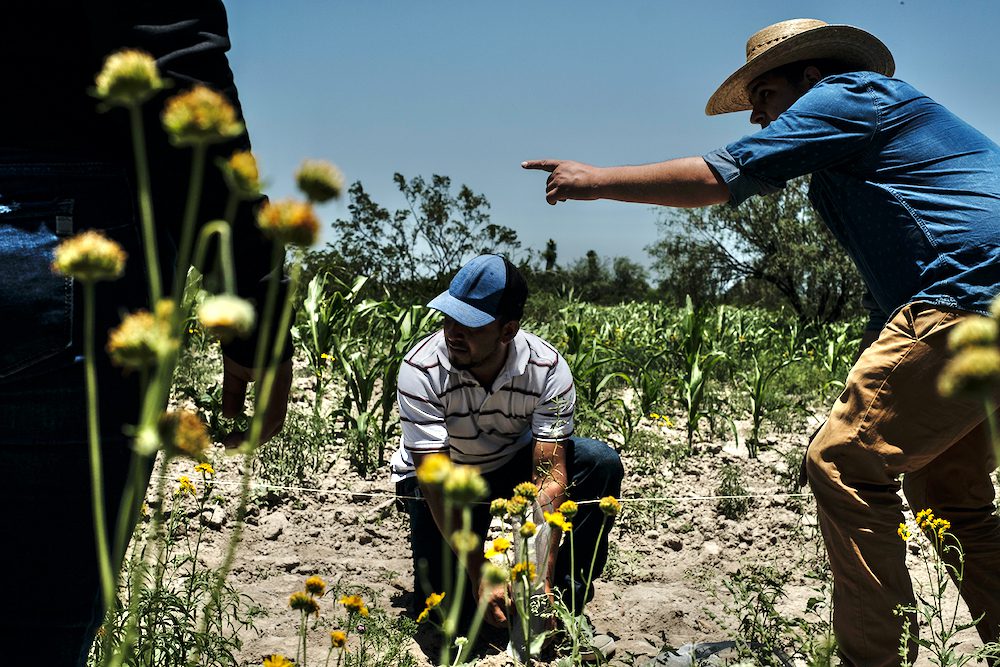