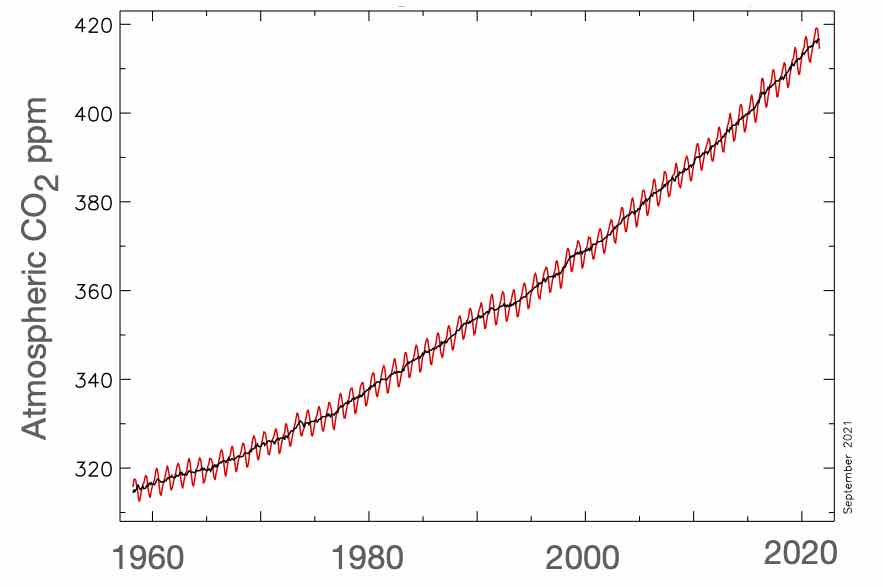 Do not expect significant progress from COP-26 on climate change mitigation.  There are fundamental barriers that prevent the deep and rapid changes that scientists advocate.  Most countries adhere to economic growth policies – which create ecological overshoot.  Unless and until we accept that we must live within ecological limits, then climate change will not be adequately tackled. Energy and resource consumption must be addressed through controlled economic contraction.

The world in 2021 was buffeted by an unprecedented barrage of extreme weather events. This is the leading edge of the climate catastrophe that lies ahead should world governments remain fixed on our present global ‘development’ trajectory.

The good news is that the recent uptick in violent weather has increased pressure on participants in COP-26 finally to implement the kind of determined measures that will dramatically lower GHG emissions and put global heating on hold; the bad news is that whatever is agreed to at COP-26 is unlikely to make any positive difference.

There have been 25 COP meetings on climate change since 1995 and several international agreements to reduce carbon emissions, including the ‘legally binding’ 1997 Kyoto Protocol and the Paris Agreement of 2015. Nevertheless, atmospheric GHG concentrations have  increased unabated during this entire 25 year period — CO2, the principal anthropogenic GHG, has ballooned exponentially from ~360ppm in 1995 to almost 420 ppm in 2020 — and mean global temperature has risen by ~1 oC.  History suggests that what should emerge from COP26 cannot emerge from COP26.

There are two fundamental barriers. First, participants in the COP meetings — government negotiators, political and scientific advisors, etc. — constitute a self-referencing cabal whose ‘solutions’ to climate change draw on the same set of beliefs, values, assumptions and facts that created the problem in the first place. In particular, they are dedicated to unconstrained economic growth propelled by continuous technological development, the beating heart and lungs of capitalism and neoliberal economics. Acceptable approaches to emissions reductions therefore include wind turbines, solar photovoltaic panels, hydrogen technologies, electric vehicles and as yet unproved carbon capture and storage technologies — i.e., any solution that involves the massive capital investment and profit-making potential necessary to sustain growth and the current socio-economic system.

My expectation is that COP26 will maintain the tradition. The latest emissions reduction strategy advanced by many COP participants is Net Zero 2050. NZ2050 implies achieving a balance between carbon emissions and extractions from the atmosphere by mid-century. Indeed, climate models already depend on so-called negative emissions technologies, particularly ‘bio-energy with carbon capture and storage’ (BECCS), to achieve the Paris target of limiting global heating to under 1.5 oC.

BECCS assumes we can gradually displace fossil fuels by growing biofuel crops to extract large quantities of CO2 from the atmosphere, and then capture and sequester the CO2 emitted when the biomass is burned. The problem is that BECCS is as yet unproved at scale and highly controversial. For one thing, the massive cropland requirement would generate crisis-level conflict with both food production and biodiversity conservation. Some climate scientists see NZ2050 as yet another in a series of “magical yet unworkable” technical (non)solutions to the climate conundrum (Dyke et al., 2021). They argue that the idea of net zero simply continues what has proved to be a “recklessly cavalier ‘burn now, pay later’ approach” which has seen carbon emissions continue to soar.  Spratt and Dunlop (2021) characterize NZ2050 as “not just a goal, but a strategy for COP-26 to lock in many decades of unnecessary fossil fuels use well past 2050… [and creating] unacceptable risks of unstoppable climate warming.”  These characterizations depict a world in desperation, willing to risk catastrophic climate change in service of a perceived need to maintain growth-oriented business-as-usual-by-alternative-means. Perversely, then, mainstream climate disaster policy seems designed to serve modern techno-industrial  society and the capitalist growth economy so the latter appears to be “the solution to (not the cause of) the [problem]” (Spash, 2016, p. 931).

Second, climate change is not even the real problem; ecological overshoot is (Rees, 2020).  ‘Overshoot’ occurs when humanity consumes bio-resources faster than ecosystems can regenerate and waste production exceeds nature’s assimilative capacity (see GFN, 2021). In effect, the growing human enterprise is literally consuming and polluting the biophysical basis of its own existence.

Overshoot is a meta-problem: climate change; plunging biodiversity; pollution of land, air and waters; tropical deforestation; soil/land degradation etc., etc., are all co-symptoms of overshoot. Climate change is an excess waste problem — CO2 is the greatest waste by weight of modern techno-industrial (MTI) economies. We cannot solve any major symptom of overshoot in isolation. Indeed, the mainstream approach to emissions reductions will not only fail to subdue climate change but, by promoting material growth, will exacerbate overshoot (Seibert and Rees, 2021). On the other hand, if we eliminate overshoot we simultaneously relieve its various symptoms. The problem is, the only way to eliminate overshoot is, by definition, through some combination of absolute reductions in energy and material consumption and smaller populations, i.e., through controlled economic contraction.

This is why we cannot expect COP-26 to address the human eco-predicament.

Teaser photo credit: Greater Los Angeles lies on a coastal mediterranean savannah with a small watershed that is able to support at most one million people on its own water; as of 2015, the area has a population of over 18 million. Researchers predict that similar cases of resource scarcity will grow more common as the world population increases.[20] By Tuxyso – Own work, CC BY-SA 3.0, https://commons.wikimedia.org/w/index.php?curid=28845100

By William E. Rees, originally published by The Great Transition