I have a pretty big family, with seven aunts and uncles and 18 first cousins spread out from one coast of the United States to the other. In 1968, the family (10 strong at the time) was looking for the perfect place to call home, and they found it in the South Town Fork Creek neighborhood of Kansas City.

South Town Fork Creek is located in southeastern Kansas City and was the ideal location to bring up a young family with lots of kids. It was a middle-class, diverse, majority single-family neighborhood; where you could walk to a candy store, the elementary school, and the zoo within 10 minutes. As I said, the ideal place to raise kids. 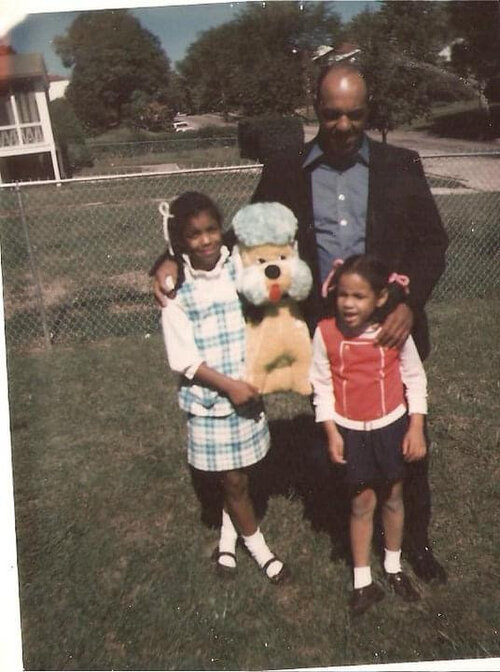 South Town Fork Creek was also the furthest south into the Kansas City suburbs that real estate agents were showing black families in the 1960s. In fact, my grandpa, who was black, bought a house with a racially restrictive clause in the deed. It said in plain English the home wasn’t to be sold to anyone of the African American race. They were able to purchase the home because the federal government had declared such clauses invalid, but black families and white families were still being steered to different neighborhoods around Kansas City. 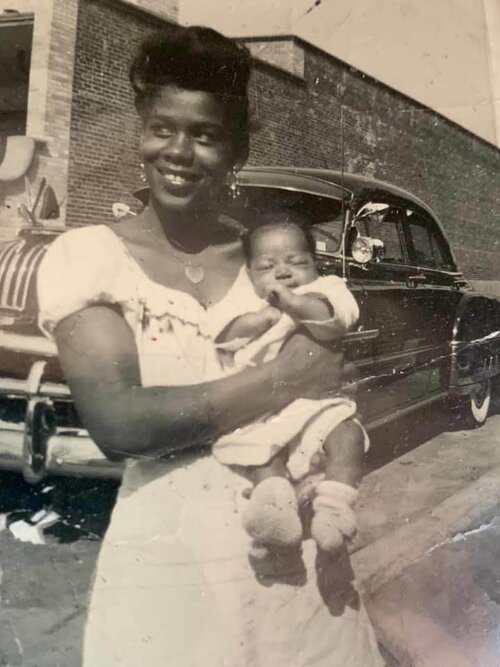 My family is lucky enough that we can all revisit this house any time we want, to see childhood bedrooms, or look through the mountain of photo albums my grandmother collected over the decades.

Whenever my family all gathers at our grandparents’ house, my aunts and uncles can’t wait to reminisce about how they used to ride their bikes around the neighborhood to the nearby zoo and concert space in Swope Park. Old disagreements between uncles over who won what kickball or flag football game inevitably get stirred up. And, my personal favorite, stories about my mom growing up as the youngest sibling and how her older siblings would give her a hard time for it.

Hearing these stories as a kid, I always was so confused about why my younger cousins and I didn’t have similar experiences there. Sure, we played in the yard that felt like the size of a football field, and explored all the strange tools and old things in my grandpa’s garage, but we never really rode our bikes around there, or walked to the zoo, or walked around at all, really.

Now, after learning more about neighborhood planning in Kansas City, I understand the history of my grandparents’ neighborhood a little bit more, and why it’s so different now than it was when my mom was a child.

The neighborhood changed rapidly after my grandparents moved in. There is a good possibility their neighborhood fell victim to blockbusting, a practice by real estate agents that results in neighborhoods rapidly changing from mostly white to all black, because agents convinced white homeowners to sell by telling them their property values would decline with the increase of black families in the neighborhood.

My aunt remembers when they moved in, she was in elementary school and all of their neighbors were middle class, many of them business owners. She remembers the neighborhood was very diverse, with all of their next-door neighbors being white. By the time she went to high school, her neighborhood was predominantly black. From my experience visiting there over the past two decades, I never saw people of different races; it very much felt like a segregated space of the city. 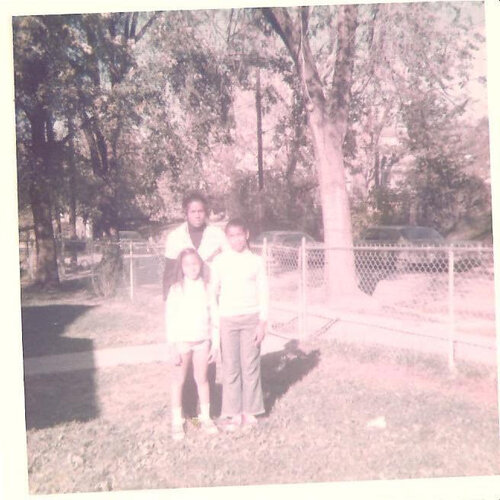 The South Town Fork Creek neighborhood, along with many others on the east side of Kansas City, had to deal with factors that eventually led to the neighborhood falling on hard times. First, with Kansas City becoming more auto-centric from the 1950s to the 1960s, many neighborhoods were being sacrificed to make way for highway systems that would connect the downtown to the surrounding suburban areas.

For my grandparents’ neighborhood, that was Highway-71. This highway bisected the eastern neighborhoods of south Kansas city to make easy access to the rapidly growing suburbs to the south, such as Grandview and Lee’s Summit. The highway was built literally four blocks away from my grandparents’ house, and with highway construction comes fragmentation of neighborhoods and overall disinvestment in an area.

Now, where there were candy stores or corner grocery stops, there are gas stations and fried chicken drive-thrus. This area of the city is now seen as little more than a pathway to better areas like bars and restaurants in midtown, or shopping districts in the suburbs. These areas of the city are all too familiar with the feeling of being pass-through areas, not a destination.

Another big factor that added to the fragmentation of their neighborhood community, according to my aunt, was the school integration policy known as busing. As a 23-year-old, I hear “busing” and think: what a good and honest effort to give children a chance at integrating and learning from communities unlike their own. For my mom and aunts and uncles, it was a very different reality.

There is a high school and middle school located less than a 10-minute walk from my grandparents’ house, but my mom and some of her siblings had to be bused 30 minutes away to a school in an entirely different city. Now, imagine your high school community and consider how foundational that is to your neighborhood and your city; school is the great community maker. It is where lifelong relationships are often made, and tied to place.

My aunts and uncles around the same age as my mom didn’t get the opportunity to build community in their neighborhood. All of their friends and extracurricular activities were happening in and around the town they were bused to school for. Because of this, they didn’t keep in touch and maintain friendships in their neighborhood, making the ties that might have kept them attached to that place much, much weaker. 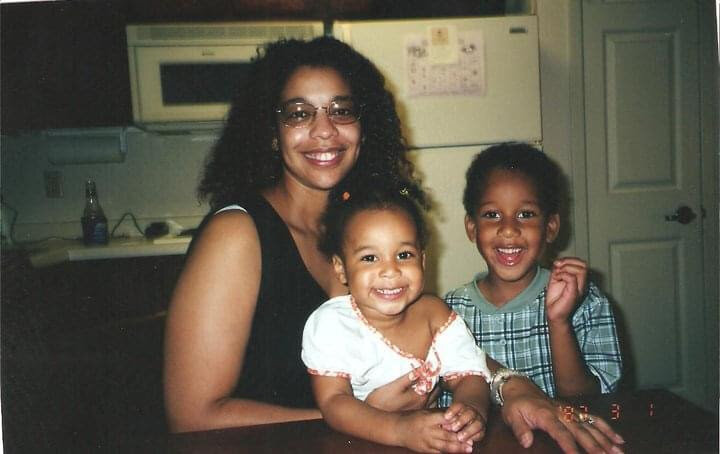 I have thought a lot about my family’s story and how it relates to urban planning in Kansas City and communities like it throughout the United States. The South Town Fork Creek neighborhood is a part of a larger area of Kansas City that has been heavily disinvested because of historic and structural racism in our built environment.

Whether it’s black homes being appraised for much less than they’re worth just because of who owns them, or property assessments disproportionally being inflated in low-income minority communities, causing them to have higher tax burdens, it sometimes feels like the problems are so big, it is hard to properly understand their scope. But there is one thing we can be sure of: we must check our systems to be sure they are not reinforcing cycles of inequity in our communities.

The geoanalytics firm Urban3 produced a redlining analysis of Kansas City and found that redlining was still affecting the financial productivity of the city, and thus coming back to bite them in the form of lost city-wide revenue. Their analysis found that, to this day, depending on the redlining classification of most areas of the city, the property value in some neighborhoods has been protected and even boosted, while in others the value has been suppressed and even reduced.

This analysis showed clearly how even though redlining was practiced almost a century ago, it still actively affects the growth, or lack thereof, of our places today. 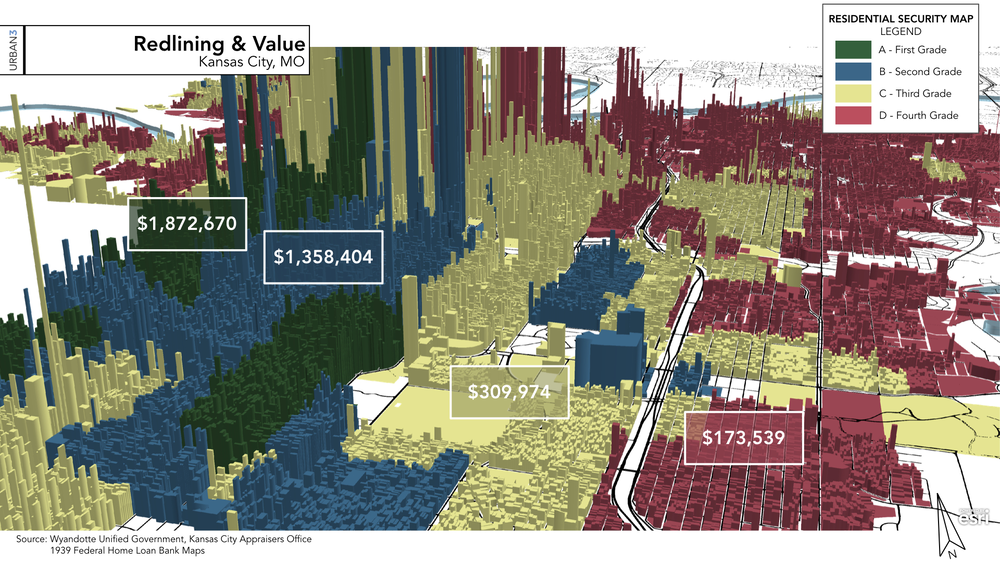 As a native Kansas Citian, one thing that really resonated with me from Strong Towns’s Kansas City series last year was the last article: “Kansas City Has Everything it Needs.” I felt this article was incredibly accurate; Kansas City is a place bursting with vibrant and passionate communities. In neighborhood pockets around the city, they are doing great work to build back their place, thickening up neighborhoods and incentivizing local investment.

The Lykins, Blue Hills, and Wendell Phillips neighborhoods are all located in areas of the city that were previously redlined. These neighborhoods felt forgotten by the city and had their own community step up and take their fate into their own hands.

There is no reason why there shouldn’t be a bright future ahead for the South Town Fork Creek neighborhood. They have a strong history of neighborhood organizing and many great amenities within walking distance. It is certainly an area that is ripe with potential; I can only hope that any future changes made will be to make way for families like mine, that have had to deal with the ramifications of living in a place for decades that has been routinely disinvested in. And, maybe, the South Town Fork Creek neighborhood will eventually be seen as more of a destination, rather than somewhere you speed past on your way to and from downtown.