Residents of this small town, which has fought a long battle against the project, celebrate the partial victory but also express disappointment.

I won’t sell, I swear to the God who is watching me

I tell you crying with rage, I will not sell.

I will not leave, even if the water reaches my neck

Even if they think they can scare me away, I will not leave.

Lola Carbajal gripped the mic with a sweeping gesture to the scattered spectators, her resonant voice worthy of a mariachi trio. Her sister, Pachita Carbajal, sang harmonies at her side as the tiny audience responded in kind with appreciative gritos and bravos.

For 16 years, Temacapulín, a remote pueblo of 400 full-time inhabitants, about two hours from Guadalajara, has put up a fierce fight against the multimillion dollar mega-dam project that would flood the village, along with two others in rural Jalisco state. All photos by Tracy L. Barnett 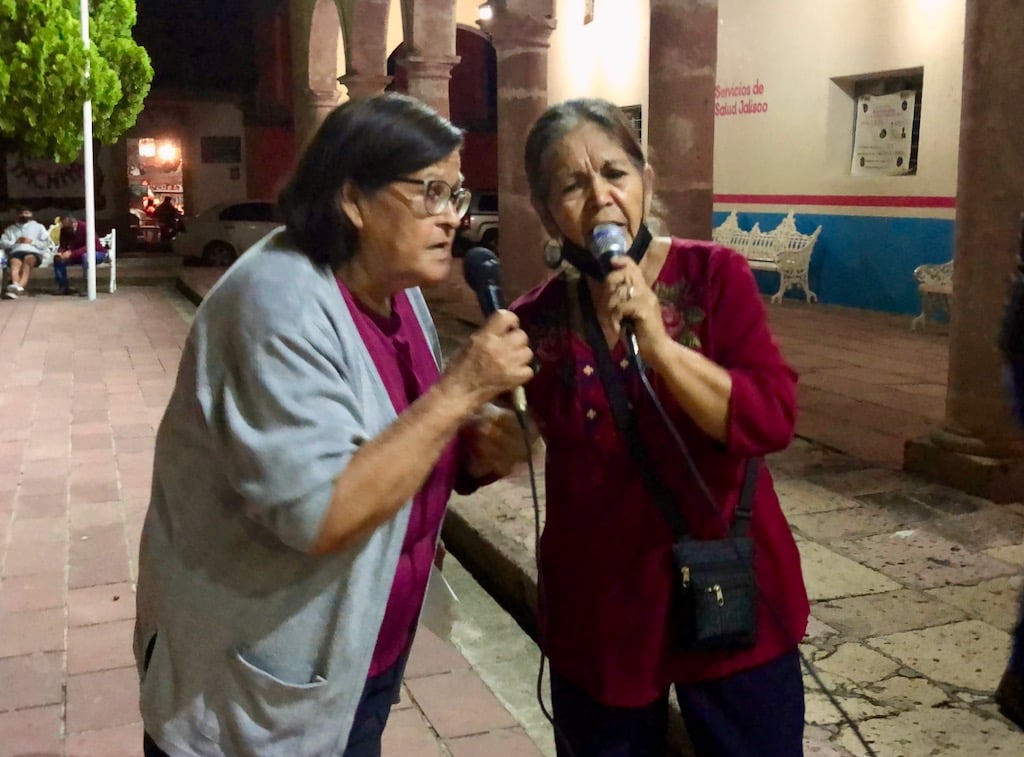 The night before the president’s visit, the Carbajal sisters, Lola and Pachita, sing protest songs encouraging the people of Temaca to stand firm. 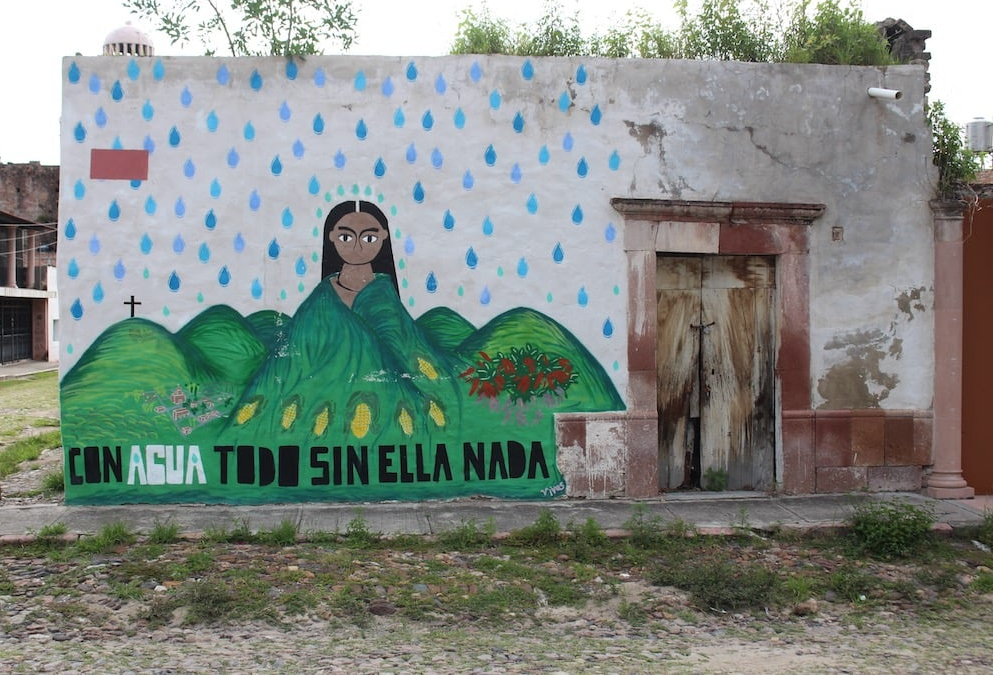 “With Water, Everything. Without her, Nothing,” reads a mural in the town.

The Carbajal sisters, now in their 60s, have animated many a crowd over the 16 years of struggle to save their beloved Temacapulín from the nearby, nearly finished El Zapotillo Dam, but this night was different. This night they were preparing to send a powerful message to the president of Mexico, who was scheduled to pay their town in the country’s western highlands a visit the next day — Saturday, August 14 — a day that would hopefully mark a turning point in the history of Temaca, as the town is affectionately known. And they, together with scores of other defenders of the historic village, would be ready.

In the lead-up to his visit, villagers set up a loudspeaker that broadcast over the historic plaza a continuous loop with the president’s voice, recorded over the years in different speeches, promising to save their village. They had carefully assembled a welcome carpet of brightly colored sawdust in the traditional style. They had painted and printed scores of banners, the largest of which would be carried by five children and would challenge him in big black block letters: “MR. AMLO, KEEP YOUR WORD. YOU PROMISED THAT YOU WOULD SAVE OUR VILLAGE TEMACAPULÍN.”

President Andrés Manuel López Obrador had paid the picturesque village three visits in previous years, always assuring the villagers that if he were elected, he would save their town from the multimillion-dollar megaproject that would flood the village, along with two others in rural Jalisco state, in order to provide water for the 5 million people in the state capital, Guadalajara, as well as for the industrial city of Leon, in the neighboring state of Guanajuato. In early August, under increasing pressure from Jalisco Governor Enrique Alfaro to finish the nearly completed dam, the president agreed to come and meet with all the parties to try and find a solution. 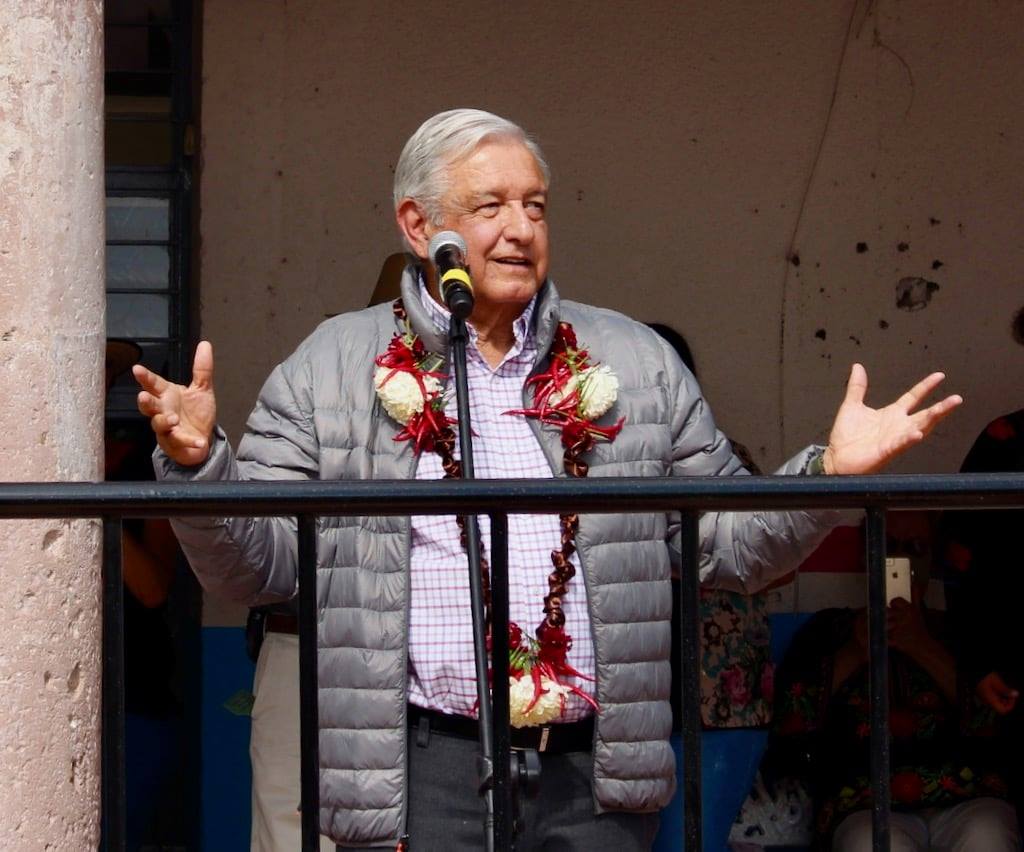 “If, with all this, the people from Temacapulín say ‘We don’t want it,’ then we have to continue with the work only of protection to avoid an extraordinary situation, and that is where we will stay,” President Andrés Manuel López Obrador told the assembled crowd. 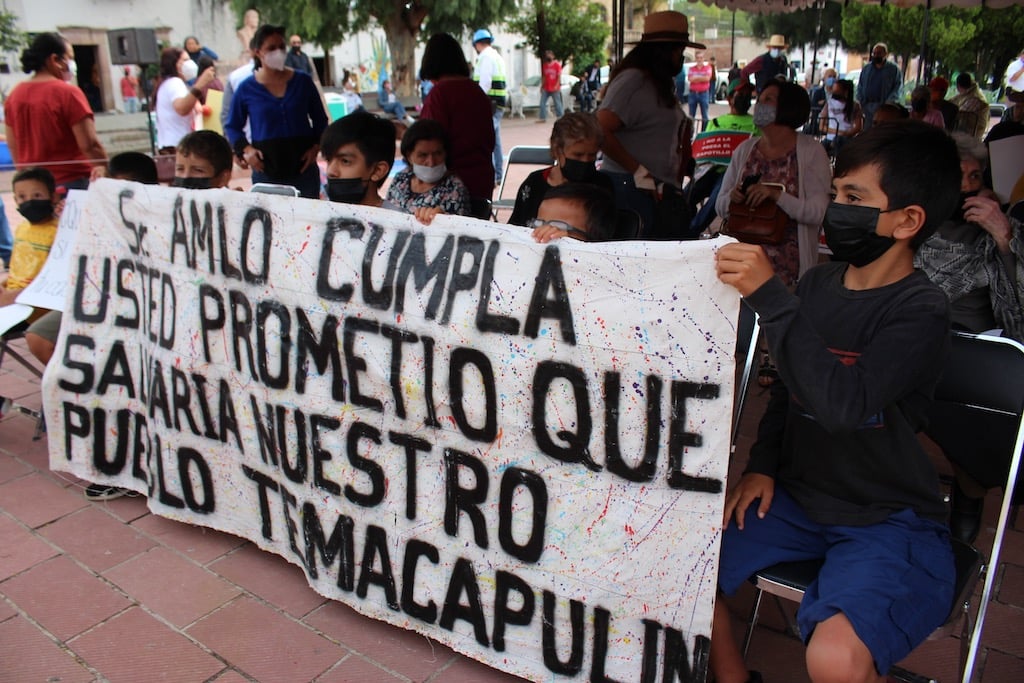 “MR. AMLO, KEEP YOUR WORD. YOU PROMISED THAT YOU WOULD SAVE OUR VILLAGE TEMACAPULÍN,” reads the largest banner, carried by children, that greeted López Obrador. 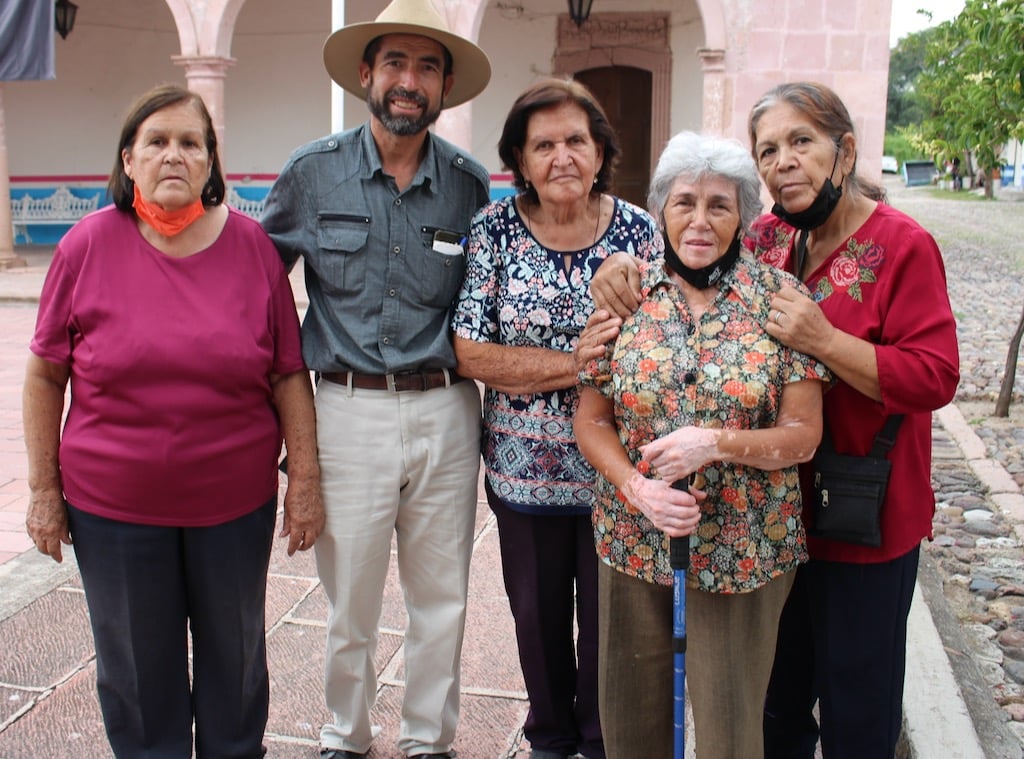 Gabriel Espinoza (second from left), a former priest and one of the movement leaders, said he was disappointed with the president’s offer but acknowledged the tremendous political pressure on López Obrador to get the project up and running. “At the end of the day we are arguing for the planet, not only for three small villages,” he said.

“Es un honor, estar con Obrador (It’s an honor to be with Obrador),” chanted the crowd as the president received a garland made of the town’s signature red-hot chiles, and then made his way to the mic under the arched portal of the historic municipal building, shaking a lineup of outreached hands along the way. Fidel Torres, the son of a migrant worker who had spent time himself in the US as an undocumented immigrant, was the master of ceremonies.

“We expect no less than what you promised us,” he said, respectfully but firmly. “We don’t want to put you in a dilemma. We know all the elements for and against that they tell us. This is not a fifi (elite) town. We belong to this movement and we want to change Mexico. This project from its beginning, flawed in origin, has had to be endured by long years of struggle for these humble people.”

López Obrador listened intently to a lineup of villagers: children, elders, people representing each of the towns that would be flooded by the dam, and people representing the hijos ausentes (absent sons and daughters, their name for the thousands of former residents who have left to make a living elsewhere, but who maintain a home in Temaca),spoke about the many problems with the project.

Finally Gabriel Espinoza, the former priest who left the priesthood to defend his village, took his turn at the mic. He handed the president a formal request on behalf of the Save Temaca committee asking the government to conduct a financial and technical audit of the more than $600 million of public monies that have been poured into the dam, and for those responsible for the waste and corruption to be held to account.

Espinoza has launched his own movement with fellow Save Temaca committee members, “Volver a la Raíz,” or Return to the Roots,” calling for an equitable and ecological distribution of water resources, or a “Water Revolution.” The committee, together with experts in sustainable water management, has met with a government working group over the past two years to create a series of alternatives to the dam that could provide for the needs of Guadalajara — such as identifying and repairing the leaks in the city’s deteriorating pipe system, through which an estimated 40 percent of the city’s water supply is escaping.

“You know the whole Republic well, Mr. President. What is happening with the big cities, growing and growing without end? There’s no water. We have to go back to the countryside,” he said. “We must support the food sovereignty of this country and that is not going to be built in the big cities. That must be built in the countryside — and that is why it is important to balance the water issue… Mr. President, spend on infrastructure and spend to clean the water. Or better, not contaminate it. You have to start with a new water culture.”

When it was López Obrador’s turn to speak, he proposed a compromise: The dam would not be built to the previously planned 105 meters. The aqueduct that had been planned to carry the water to Leon, a project that is currently tied up in the courts, would not be built either. The president said he would only authorize the completion of the dam at its current 80 meters, and its operation at a level that would not flood the towns and would provide water for Guadalajara and the local region only.

But the townspeople, he said, would have the last word.

“If, with all this, the people from Temacapulín say ‘We don’t want it,’ then we have to continue with the work only of protection to avoid an extraordinary situation, and that is where we will stay,” López Obrador told the assembled crowd.

The president’s motorcade departed the city in another flurry of outstretched hands, headed for the dam site, where he met with Governor Alfaro and reiterated his position.

(A week after López Obrador’s visit, this past Saturday, August 21, the director of the National Water Commission, Germán Martínez Santoyo, traveled to Temaca and met with the residents to hammer out the details of the compromise plan. López Obrador himself plans to return to Temaca within a month to hear its citizens’ views on the matter again.)

After the president left, villagers celebrated the partial victory. The compromise plan was, after all, based on options López Obrador and his team had hinted at in the past. But privately, some expressed their disappointment in the president for not canceling the dam as he had promised.

“I told him, ‘Remember that when you came before, you said that you would put 10,000 soldiers and that company would not continue,’” said Consuelo Carbajal, Lola and Pachita’s cousin, who runs a tiendita (store) in front of the plaza. “Because when [the then-environmental secretary Victor] Toledo came, he said that that dam was an aberration.”

Espinoza, too, was disappointed, but realistic. He acknowledged the tremendous pressure on the president due to the money spent and the water crisis occurring in Guadalajara.

Over the short term, he said, maybe the best they can hope for is that the three villages be saved — along with their agricultural lands, which are essential to their food security. But over the long term López Obrador’s touted “Fourth Transformation” must include a balance between city and countryside, and a movement from the rapidly growing and unsustainable megacities back to the land. And, he added, megadams like El Zapotillo must become a thing of the past — not only because of the threats they pose to communities and to biodiversity, but also because of climate change, due to the massive amounts of methane released by the flooded and decaying vegetation destroyed by the dam.

“So at the end of the day we are arguing for the planet, not only for three small villages,” said Espinoza, before taking his leave to grab his guitar and sing for the villagers lining up for lunch.