What could bring down the industrial civilization? Would it be global warming (fire) or resource depletion (ice)? At present, it may well be that depletion is hitting us faster. But, in the long run, global warming may hit us much harder. Maybe the fall of our civilization will be Fire AND ice.

The years after World War 2 saw perhaps the fastest expansion and the greatest prosperity in the history of humankind. Yet, it was becoming clear that it was exactly this burst of prosperity and expansion that was creating the conditions for its own collapse. How long could humankind continue growing an economy based on limited natural resources? How long could the human population keep increasing?

Not everyone agreed that this was a problem, and the mainstream idea seemed to be that technological progress could maintain the human expansion forever. But, for those who were concerned about this matter, the discussion soon split into two main lines: one focused on depletion, the other on pollution. Over the years, the “depletionists” concentrated on fossil fuels, the main source of energy that keeps civilization moving. Initially, the disappearance of fossil fuels was seen simply as a necessary step in the progression toward nuclear energy. But the waning of the nuclear idea generated the idea that the lack of fossil energy would eventually bring down civilization. The collapse was often seen as the result of “peak oil,” the point in time when oil production couldn’t be increased anymore. It was estimated to occur at some moment during the first 2-3 decades of the 21st century.

On the other side, the focus was initially on pollutants such as smog, heavy metals, carcinogenic substances, and others. Pollution was generally seen as a solvable problem and, indeed, good progress was done in abating it in many fields. But the emerging idea of global warming soon started to be seen by “climatists” as an existential threat to humankind, or even to the whole planetary ecosystem. The time scale of climate change was never defined in terms of momentous events, but as a gradual temperature rise that could play out over a century or more. Some climatists spoke of “tipping points,” e.g. the “methane explosion,” that could have brought rapid ruin to humankind. But it was impossible to estimate the time scale of these events and the majority of climatists tended to regard those who expressed these views as scare-mongering catastrophists.

Climatists and depletionists were looking at the same scene, just from two different viewpoints. But human beings notoriously have difficulties in changing their views. Their minds seem to become easily fixed on a single problem, and they tend to play the game of “my problem is bigger than yours.” Ours is an age of “either-or” positions (you are either with us or against us, as G.W. Bush famously said). So, climatists and depletionists found it hard to work together and, often, they became bitter enemies of each other. It was a dispute that reminded the struggles of the Medieval Christian Church between heretics and orthodoxes (with the orthodoxes defined only after the debate had ended, sometimes with the members of other side burned at the stake).

Depletionists were often geologists who had no training in climate physics. Sometimes they would scoff at the idea of climate change as the delusion of a group of pseudo-scientists who played with models that were unrelated to the real world. More often, they would not attack climate science directly, but argue that the depletion of fossil fuels would solve all climate problems: no oil, no emissions. Then, no emissions, no climate change.

On their side, climatists were often specialists in atmospheric physics. They were heavily focused on climate models while tending to rely on industrial estimates for the available fossil resources as external parameters in their calculations. They tended to see these resources as abundant and believe that curbing emissions to avoid a climate disaster would make depletion irrelevant.

It was a clash that could not be solved by discussions among people who were speaking different scientific, and even political, languages. Peak oil had its moment of popularity during the first decade of the 21st century, then it faded out of the debate. Climate change, instead, kept making inroads in the global memesphere, despite the dogged resistance of several lobbies and political sectors. By the end of the 2nd decade of the century, it was dominating the debate and it had nearly completely silenced the opinion that peak oil was a threat worth of attention.

The reasons for the tilt of the debate to favor climatists may have been more than one, but overall it may well be that it was because it is much easier to worry about a problem that is more distant in time. Politicians could comfortably claim that they were doing something useful while proposing that the airlines could run their planes on biofuels or that cars could be run on “blue hydrogen.”  Peak oil may have arrived, probably as early as 2008 for conventional oil, but it was simply invisible to the eyes of the public and of the decision-makers.

All along the debate, it was almost always impossible to propose a compromise that took into account both problems, depletion and warming. But, already in 1972, the study titled “The Limits to Growth” had tackled the problem in a holistic way (image by Magne Myrtveit). The computer model used in the calculation didn’t share the limitations of the human mind and could simply compute the results of the interactions of the various factors. At that time, the importance of climate change was not yet clear, but the “pollution” parameter was later recognized as representing the effects of greenhouse emissions.

The results of the “base case” scenario computed in “The Limits to Growth” study (see the figure, below) indicated a probable collapse of the industrial civilization for some moment of the second decade of the 21st century. It was intended to be the illustration of a trend rather than a prediction, but it may have turned out to have been remarkably prophetic. 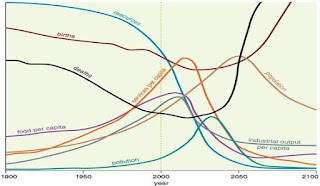 But what was the cause of the collapse? Depletion or pollution? The answer was “both,” but the model showed that the peaking of the production of natural resources coincided with the start of the decline of the industrial system. Pollution (climate change) arrived later and its effect was mainly to make the decline steeper, generating a typical “Seneca Cliff.”

This result made a lot of sense: pollution is a consequence of resource exploitation and you would expect it to arrive after that depletion has played out its cycle of growth. Yet, it was also possible to create scenarios using the “Limits” model where pollution had such negative effects to become the main driver of the collapse. As usual, the future can be imagined but not predicted. In 1972 it was way too early to presume to be able to predict what was supposed to happen 50 years later.

But things kept moving and, in 2009, Dave Holmgren systematized and arranged the collapse question in a semi-quantitative quadrant that indicated several possible futures that depended on the interplay of  depletion and warming. Holmgren didn’t take a specific position on what was the most immediate threat, but his diagram provided guidelines to assess just that.

And here we are: in 2021 Holmgren’s scenarios were reviewed by “Rutilius Namatianus” (RN) in a series of three posts on “The Seneca Effect” (one, two, three). He arrived at the conclusion that — just like in the “base case” scenario of The Limits to Growth —  depletion is arriving faster and hitting us harder.  According to RN, the reaction to the 2020 pandemic is mostly an effect of the economic system being on the verge of collapse because of depletion, even though the public has not realized that yet.

Like other depletionists, RN is skeptical about the existence of human-caused climate change. Apart from that, though, his position makes sense. Right now, it is difficult to find a sector of the economy so badly damaged by global warming that it might cause the system to collapse. So, the crash of 2020 may be attributed to the constraints generated by the gradually increasing costs of the exploitation of natural resources for a growing economy and an increasing population.

A civilization based on conspicuous consumption cannot keep going for long when there is little left that can be consumed. Hence, we are seeing a series of correlated changes: less traveling (especially by plane), the collapse of the tourism industry, the contraction of the entertainment industry, less commuting, and the reduction or the disappearance of other wasteful activities that we can’t afford anymore. All that is officially just temporary and things are supposed to return soon to “normal,” that is to the best of worlds. But we may reasonably doubt that. Instead, we may well be seeing the start of the Seneca Cliff that “The Limits to Growth” had already seen in its scenarios of 1972.

Does all that mean that climate change is not a problem anymore? Not at all. Surely, the economic crash of 2020 is reducing the human impact on climate, but as I noted more than once complex systems always kick back (a quote by John Gall). We still have to receive a kick from Earth’s climate that may be much worse than anything we received so far(*). What we are doing to the ecosystem might turn out to be just a moderate perturbation, with the system kicking back to its original state in a few millennia — or maybe even just in a few centuries. In this case, some forms of human civilization could survive the change. Or the ecosystem may kick us up all the way to the Eocene, with a temperature of 12 C higher than it is now. That won’t necessarily mean the extinction of the human species, but it would not be unlikely.

And here we are, laughing at the pitiful attempts of the so-called “decision-makers” to stop the tsunami with teaspoons. We are both spectators and actors of the grandest spectacle in the history of the world: the end of the mightiest civilization that ever existed. No matter how our future will be playing out, remember that the destiny of soap bubbles is just of shining gloriously in the sun for a short while. Universes may be little more than a shower of soap bubbles in the sun, just on a grander scale. As we fade out, there will be new universes and we may even be able to create a few ourselves. Humans may have done a lot of damage to the ecosystem, but surely they never lacked fantasy!

(*) In 2012 I wrote a post on “Cassandra’s Legacy” titled “Confessions of a Peak Oiler” that some people interpreted as if I had reneged the peak oil movement. But it was not that (otherwise I would have titled it “Confessions of a FORMER peak oiler.”) I just made the point that the climate threat was bigger than the depletion threat, not that it didn’t exist.