This is based on a short talk I gave to an event, What have we learned about work during Covid 19 and what needs to change? organised by Manchester Art Gallery. I am grateful to Clare Gannaway and colleagues for the invitation and for permission to use the two pictures.

I was asked to make a selection from a collection of images at Manchester Art Gallery, which is reviewing what should be on public display from its vast collection, and how what it shows can be made more relevant to our people and our times. I chose two pictures and reflected on what they suggested to me. 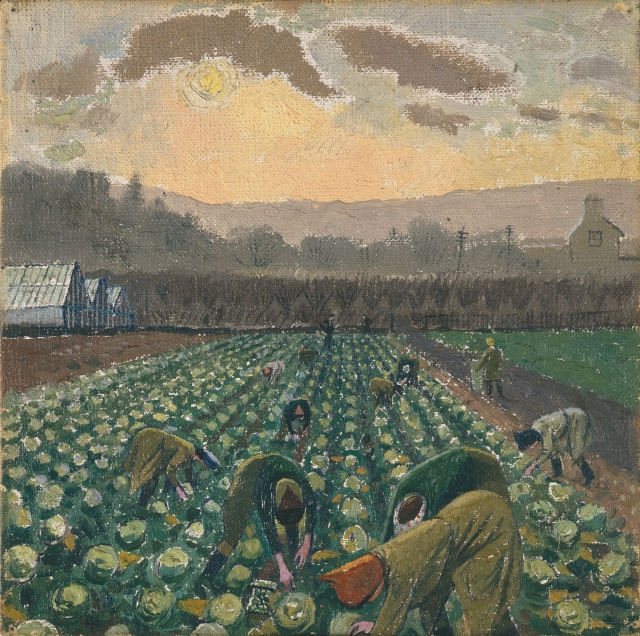 I’ve recently picked up my paintbrushes after a long break, courtesy of the lock-down. So the picture is of interest in its capture of a mundane scene, the play of the light and the rendering of the brassicas that appear to have frost on them. Is it the end of the day or the beginning?

The Covid-19 pandemic, and the experience of the lock-down, has made some things more visible to us. So many of us have had the luxury of slowing down, noticing the natural world, experiencing lower traffic volumes and cleaner air, focussing on the important things, like food and family, and maybe taking part in more creative activities. It’s also highlighted the importance of workers in basic services and provisioning – in social and health care, delivery drivers, supermarket workers for example.

Some things, though, have remained largely invisible and Sprout Picking illustrates that for me. While the picture is of a sprout field, in war time, with members of the Women’s Land Army (WLA) hard at work, for me, it also looks like the lettuce fields where I spent summers working as a young man. It speaks of the fundamental importance of food and provisioning more generally, something heightened in times of pandemic and crisis. Early on in lock-down, there was uncertainty, and shortages, then for many a renewed focus on food, cooking and quality. But behind it all there is hidden, hard, manual labour. It is back-breaking and monotonous, but there can also be conviviality and comradeship. In the picture there are also what could have been the greenhouses where we also worked, in the heat, training, side-shooting, and picking tomatoes, and I’m reminded of the modern equivalent, the acres of “los plasticos” the polythene covers in Murcia and other parts of the Mediterranean littoral, where, as in the Netherlands and elsewhere, legions of low-waged migrant workers toil. In the picture though, it is probably cold, adding to the hardship in a different way.

What’s happening here, under the conditions of the pandemic, is that, paradoxically, the possibility of our social isolation, is made possible by that hidden, collective labour, now often the lot of those marginalised and displaced. We can stay at home because they can’t.

But there’s a difference. This is from wartime, when the country focussed on producing its own food. The pandemic and Brexit give us a hint about the vulnerability of our supply chains and our national dependency on imports.

In the picture, the WLA went out and worked the land. Could we envisage a return of the rural as the linked crises intensify and likely system collapse looms?

We are in a pancrisis, a series of interlocking crises: 1. carbon pollution – global warming; 2. ecosystem encroachment and edge-convolution1 – biodiversity reduction; 3. resource exhaustion and peak extraction leading to profitability reduction and extraction frontier expansion; and 4. internal contradictions of capitalism – secular stagnation and financial crises. These wider crises have no satisfactory exit within the terms of reference of the current capitalist world system.

It isn’t just food production that makes isolation possible, but all the areas where key workers work:, and in most of these sectors people are most vulnerable to infection.

We have learned that production for need, and use values, are more important than production for profit, and exchange values, but the two sides have become ever more dis-aligned. 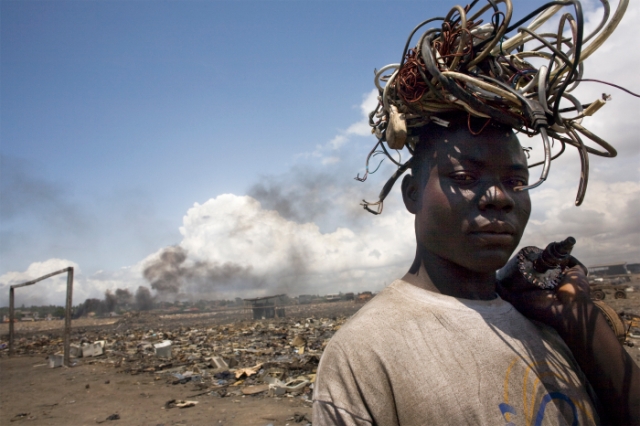 Isolation is also made possible by information technology. In the picture we see some of the consequences of the over-production and obsolescence of computing and communication equipment. It is worth quoting from the display label for this photo.

From dawn to dusk, dozens of young Ghanians, from 10 to 25 years of age, exhaust themselves seven days a week. Their mission is to disassemble the old computers and burn certain plastic or rubber components to cull the precious copper, which will then be resold. Everything is done by hand or with iron bars, makeshift tools found among the refuse. They have neither masks nor gloves. There are not even any functioning toilets. The photographic series The Hell of Copper documents the 10 square kilometre electronic graveyard of the Aglobloshie Market in Accra, Ghana where thousands of computers and electronic goods are shipped from Europe and North America. …….

Using their bare hands, the young workers are exposed to lead, mercury, cadmium, and PVC plastic which are incredibly toxic to the human body. These chemicals have seeped into the nearby canal and also contaminate the grazing land for cows and sheep. Ouedraogo’s imagery of the sprawling landscape filled with computer carcasses and the individuals engaged in this dangerous work demonstrate the profoundly troubling consequence of the constant search for the latest phone, fastest computer or new electronic gadget.

This isn’t just a problem with IT. We rely on an enormous shipping fleet to bring materials, fuels and manufactured products across the world: when the ships reach the end of their life they are taken apart in similarly horrendous conditions on the beaches of countries such as Bangladesh.

It’s not only in the exit of such products as waste for possible recycling that such devastation and super-exploitation happens. It happens in the sphere of production too. Computing and communications technology (and “renewable energy” come to that) relies on the mining of rare metals: there are conflict materials – produced in zones of conflict, often funding warring factions. Artisanal mining (a nice name for a nasty reality) is mining by private individuals who, typically without safety regulations or protective equipment, sell what they pull out of the ground for a pittance. Gold, which does not corrode, so is good for contacts, is extracted with mercury, polluting watercourses. There are concentrations of mine tailings and dam disasters like the two big ones recently in Brazil. Ecosystems are devastated by open cast mining, while habitats are destroyed as well as people’s livelihoods and communities, especially indigenous communities. Those who resist often get murdered, sometimes with the collusion of the extraction companies and governments.

Manufacture and assembly of the products is another whole panorama of injustice and exploitation: 12 hour shifts, 6 days a week at Foxconn, for example, where Apple and other products are assembled. These are what we think of as Victorian levels of labour exploitation.

The nexus of profit, the hyper-exploitation of workers, community and ecosystem devastation, these are the consequences of our mode of living. We are all implicated in ways but it is the capitalist system that is culpable.

The pandemic casts a light on inequality, exclusion and exploitation at home but the wider dimensions of the world of work and the capitalist economy remain largely invisible.

The pandemic is the writing on the wall.

We have to make profound changes to the way we all live, and that includes work. The problem is getting a toehold on the system whose parts are mutually reinforcing and and locks in destruction with its incessant expansion.

But that is another story.

1Edge-convolution is used here as concise way of referring to the increase in the ecological edge between wild ecosystems and human-dominated ones, which, together with industrial agriculture is the source of new zoonoses (pathogens of animal origin). See Wallace, R. (2020). Dead epidemiologists: On the origins of covid-19. Monthly Review Press.