The Garamantes were a North-African civilization that grew at the time of the Roman Empire. They were powerful enough that the Romans had to build a system of fortifications to defend their possessions on the coast. But the Garamantes ran out of their water resources and they faded, leaving little trace in history, except ruins, some graffiti on rocks, and a few lines written by ancient historians

The idea that a civilization may collapse because of resource depletion is often hard to believe for historians. They seem to believe that society is such a complex entity that it is impossible to find a single reason for it to collapse. And, yet, it is typical of complex systems that an external perturbation generates a cascade of feedback effects that may mask their origin and make it appear as a series of events had somehow cooperated to bring down the whole structure. But it is all the effect of that initial perturbation unbalancing the whole system: it is the straw that brought down the overloaded camel. This is the basic idea of what I call the “Seneca Collapse.”

The Garamantes were a classic case of a civilization that collapsed because they ran out of an unreplaceable resource: in this case, water. They were an interesting case of a society that had grown and prospered in a barren land, in the middle of the Sahara desert. 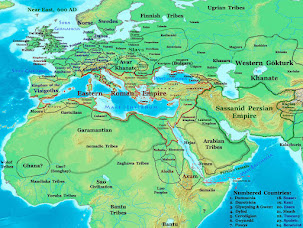 But they were able to prosper by means of a sophisticated irrigation system. It is called the foggara technology in North Africa, in Persian it is kārēz and in Arabic Qanat. (image from Wikipedia) 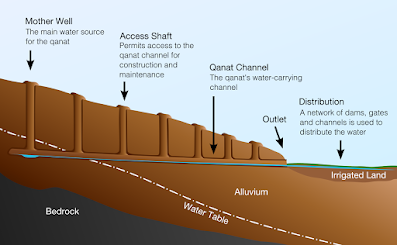 It is a sophisticated technology but it has a defect: it uses a non-renewable technology, fossil water. When the Garamantes started deploying these systems of wells and channels, around the last part of the 1st millennium BCE, it may be that the Sahara still contained relatively large underground aquifers inherited from the time when it had been green a lush with forests, about 10,000 years ago. (image source) 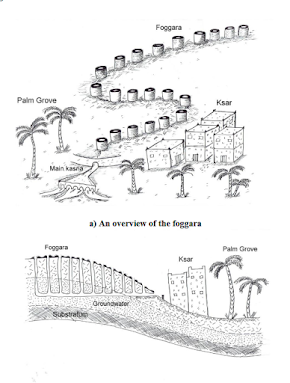 The water bonanza led the Garamantes to become a major regional power, enough to force the Romans to build fortifications to defend their coastal possessions and to use as starting points to launch raids into the Garamantes territory. Caesar fought and defeated them, while the last confrontation we know of was a military expedition launched by Emperor Septimius Severus, who is said to have captured the capital city of Garama in 202 AD. But the Romans never settled in that region.

In the end, the prosperity of the Garamantes was short-lived and they declined in parallel with the Roman empire, even though for different reasons. The story is described by David Keys in his article titled “Kingdom of the Sands.” Clearly, Keys understands perfectly well how resource depletion takes down kingdoms and empires. It is not so much a question of running out of the resource. It is that you run out of the means to exploit it (in the case of the Garamantes, slaves).

In the end, depletion of easily mined fossil water sounded the death knell of the Garamantian kingdom. After extracting at least 30 billion gallons of water over some 600 years, the fourth-century A.D. Garamantes discovered that the water was literally running out. To deal with the problem, they would have needed to add more man-made underground tributaries to existing tunnels and dig additional deeper, much longer water-extraction tunnels. For that, they would have needed vastly more slaves than they had. The water difficulties must have led to food shortages, population reductions, and political instability (local defensive structures from this era may be evidence for political fragmentation). Conquering more territories and pulling in more slaves was therefore simply not militarily feasible. The magic equation between population and military and economic power on the one hand and slave-acquisition capability and water extraction on the other no longer balanced.

The desert kingdom declined and fractured into small chiefdoms and was absorbed into the emerging Islamic world. Like its more famous Roman neighbor, the once-great Saharan kingdom became, little by little, simply a thing of myth and memory. Along with the rest of the world, Berbers living in the Fazzan today have all but forgotten their ancestors. The kingdom’s legacy has faded so dramatically that local residents believe the vast water-extraction system–the pride of the Garamantes–is the handiwork of Romans.

It seems that the city of Garama still existed when it was conquered by the Arabs, during the 7th century AD but, after that, there are no more records about it.

It is curious how little is left of a kingdom that, once, was powerful enough to challenge the mighty Roman Empire. We have only fragments of knowledge of a civilization that was considered already remote and mysterious during classical times. Today, the Garamantes are mentioned by Jorge Luis Borges in his masterpiece “El Immortal” as people who “keep their women in common and nourish themselves with lions.” The Garamantes are one of the civilizations you can choose to play in Sid Meier’s Civilization V. And we have a few more snippets, including a recent novel (2018) that features an archaeological search in the former land of the Garamantes. I figure that if there existed a list of the worst novels in history, this one would make it to the top (that’s why I don’t give you the link, but if you like to harm yourself, ask me privately!)

And so it goes, civilizations grow, become powerful, then they are lost in the sand. That was the destiny of the Garamantes. What will be left of ours, well, it is all to be seen. But they say that humans always march toward the forest, leaving the desert at their back. And the Earth is round.