“Grief and love are sisters, woven together from the beginning. Their kinship reminds us that there is no love that does not contain loss and no loss that is not a reminder of the love we carry for what we once held close.” ― Francis Weller, The Wild Edge of Sorrow: Rituals of Renewal and the Sacred Work of Grief

“What I would really like to do – what my friends and I really want to talk about – is climate change and the grief hitting people now,” Anne Murphy (a death educator and home vigil guide) told her friend Ellen Huffschmidt.

“I was hearing that people in environmental and climate organizations were quitting their jobs because it was so depressing…. We don’t want to lose people because they’re getting burnt out.”

They invited Catherine Jordan, a community organizer, ritual maker and climate activist, to help them create an event where people could connect with and express their grief.

The women sent a letter to local climate and environmental organizations explaining their concern and inviting people to talk about it over tea. Fifteen women attended the brainstorming session, six of them associated with Transition Town groups operating in the Twin Cities. Among them was Shante’ Zenith, a student completing an MFA with a focus on grief-tending and ecological healing. Shante’ offered to collaborate.

“If this is going to be some namby-pamby thing that won’t get into it, I’m not interested. I want to really grieve. I don’t want to be coddled.”

“When she said that, I knew we were onto something important,” Anne said.

Designing A Container for Grief

Anne, Ellen, Catherine and Shante’ planned a weekend retreat that would allow participants to:

The overall structure of the weekend would follow Joanna Macy’s Work that Reconnects, which focuses on four key themes: gratitude, honoring the pain of the world, seeing with new eyes, and going forth. 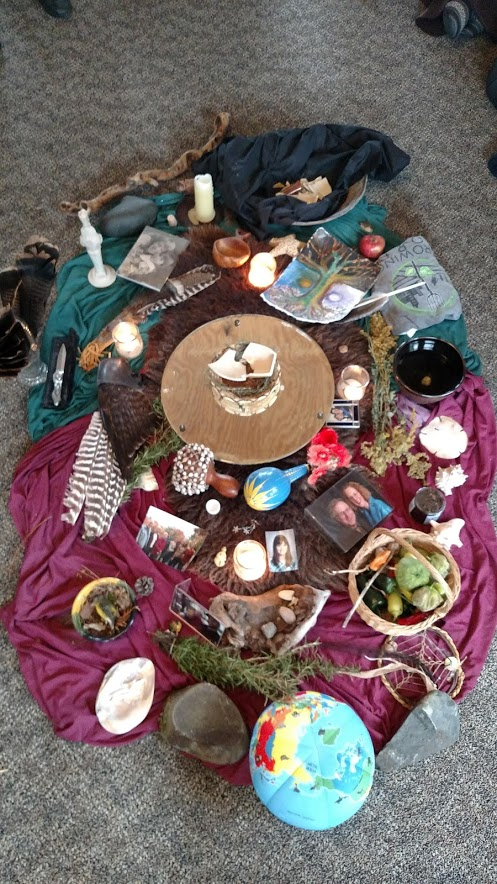 “The Dagara people are still in relationship to the land and have an awareness of the Earth as a being,” Shante’ explained. “In communal ritual, there is a recognition that grief isn’t meant to be held inside the body, or carried by other humans. Grief needs to return to the earth.

“The structure of community grief and the giving of grief to the Earth takes it from a dead-end, stuck-inside grief you don’t know what to do with, and turns it into a medicine. The expression of grief becomes regenerative and grief really can be composted and transformed.”

After experiencing the circle, Catherine said, “The experience of giving voice to grief — that was profound. It was a perfect mix of head, heart and body doing the work together.”

The retreat was held at Catherine’s family farm two hours north of the Twin Cities (Minn.). Twelve women and one man entered the rustic farmhouse on Friday evening. After sharing a meal and getting to know one another, the group gathered in a large open studio to talk about the work they do in the world and the work they would do that weekend.

They shared the things they loved most in the natural world (that includes humans) and connected to gratitude through words and art. After this and every ritual that followed, the circle ended with the passing of a vase into which each person would blow their pain and a blessing.

Saturday’s focus was honoring the pain of the world. The facilitators introduced the Five Gates of Grief — the diverse ways in which grief weaves itself through a person’s life — described in Francis Weller’s book “The Wild Edge of Sorrow.”

Participants began to speak of the grief they were experiencing as they placed an object in the center of the circle to represent their love and grief – a piece of wood to represent trees, a photo of family.

After lunch,  the group turned its attention to the 3rd Gate — the Sorrows of the World — and humanity’s impact on land, air, water and climate. Chris Brandt led the group in a Shin Rin Yoku (forest bathing) exercise, using meditative walking to find connection with the natural world.

“Our circumstances are not a failure of our personalities,” Anne said, “but of our distance from nature and wildlife.”

“Chris would direct our vision and intention in small ways so that we would develop intimacy with the land,” Ellen recollected. “She kept broadening the circle of things for us to notice.”

The exercise ended with a tea ceremony in the woods, then participants returned to the farmhouse to rest and share a meal. 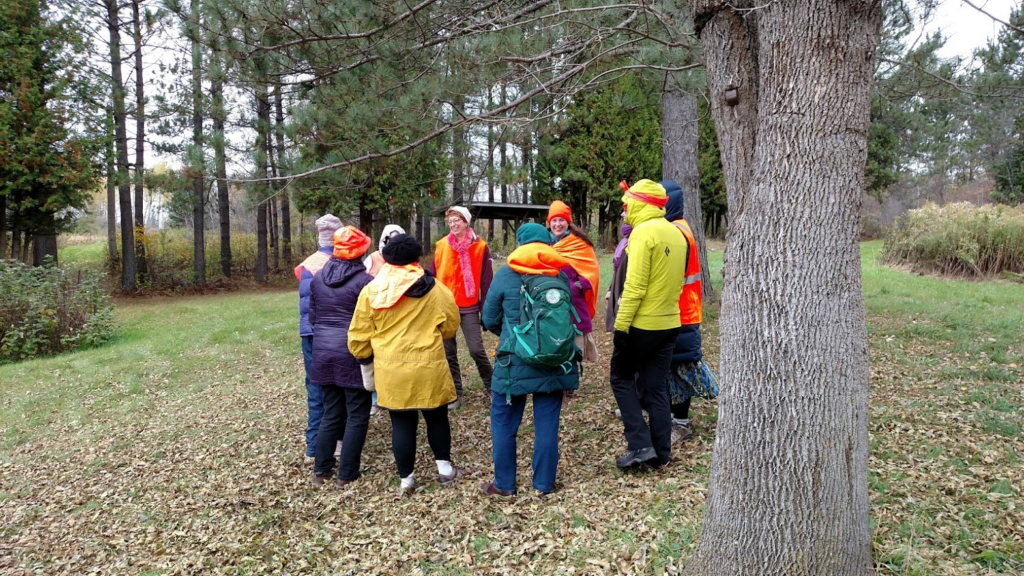 “Before you know kindness as the deepest thing inside,

you must know sorrow as the other deepest thing.

You must wake up with sorrow.

You must speak it till your voice

catches the thread of all sorrows

and you see the size of the cloth.”

That evening, Shante’ oriented the group to the process they would experience. She explained that the goal of the ritual was not about catharsis, or a performance of emotion, but rather that it was about connecting deeply to the way that grief was moving through them, and through each person in the circle. She told participants how they could stay grounded while dipping into intense emotion.

The Grief Composting Circle began with a sharing of gratitude, rooting the work they were about to do in service to all that they loved. Then the lights were turned off, creating a deep darkness into which soft drumming and wordless singing began.

A heavy stone was passed. When someone was holding the stone, it was their time to share their grief in whatever way they chose. Some people spoke, some wept, and some were silent. Those in the circle supported their processing through wordless singing and weeping in resonance with the sharer.  At many times, the voices became one, allowing people to express themselves even more fully. (For a group of white Minnesotans, whose culture doesn’t encourage – and perhaps even fears – emotional expression, this undoubtedly helped.)

By the time the stone made its way around the entire circle, a tremendous territory of emotion had been traversed. The vase holding the breath of pain and blessing was passed once again and then was smashed. The ritual ended with a single flame passed around the circle for each person to light their own candle and to name what supported them in their grief.

Reflecting on the ritual later, Catherine shared how essential the darkness was for emotional expression.

“We are all so concerned about how we look. Whether we will be judged. If we are doing it right,” said Catherine. “The cloak of darkness allows you to let it out.”

The presence of others in intimate communion helped people understand their grief within a context and a circle of support. This is real. It’s important. It’s worthy of grief.

At breakfast on Sunday, people talked about their experience. They crafted black armbands like the black armbands our ancestors wore during times of mourning. They reclaimed their objects from the altar. The broken vase was buried to bring both grief and blessings back to the Earth.

How Did the Retreat Impact Participants?

Ellen said: “One woman, who described her training as a scientist,  said that what this weekend did for her was identify in words, feelings, and rituals, something she had observed in the eyes of her colleagues. ‘Oh, that’s grief!’ Before the gathering, she didn’t have the language to identify what she was seeing. Now she could not only feel it for herself, she could also see it in others.”

“It helped me recognize the universality of grief and the fact that so many of us don’t feel supported by our family or society in acknowledging grief.”

“My grief does not seem to be as deep as some because I don’t feel that all is lost yet. But I am less afraid to embrace the grief of others and myself because of things I learned this weekend.”

“[My grief] is about the same but I have more tools to cope with it and not feel alone.”

The retreat gave Shante’ an increased appreciation of the need to bring trauma and somatic awareness into her work. What are the skills needed to witness grief and our deep relationality with the earth and other people? And how can these skills be woven into our community life? 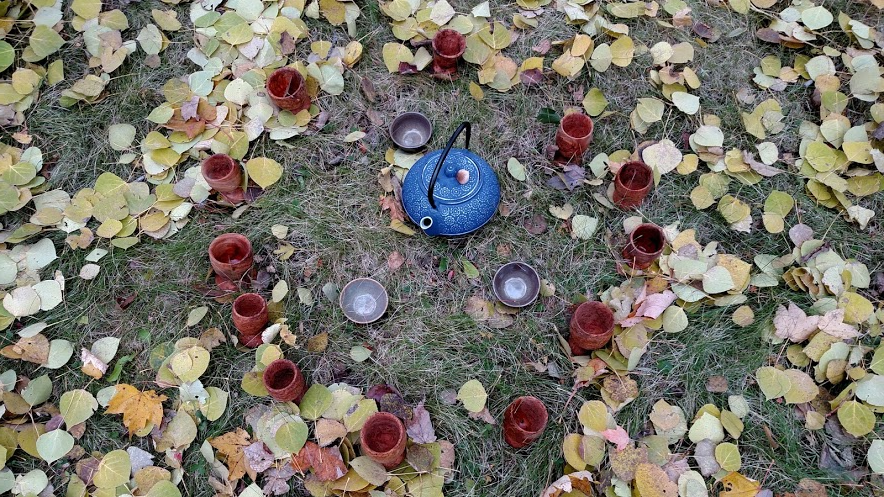 Will the Organizers Do This Again?

Leading the retreat while providing all of the behind-the-scenes support for 16 people for three days was a tremendous challenge for the four organizers. They did everything. “It was exhausting,” said Catherine. “Important, but exhausting.”

“I think of (the climate grief weekend retreat) like a dandelion,” said Shanté. “Something like this isn’t repeated multiple times in the same way, but like a dandelion it releases its seeds to the wind. It seeds other things.”

Shante’ Zenith continues to lead Earth Grief workshops.  Participants continued to meet in each others’ homes for about six months.

These organizers came to this work with a wide range of experience working in hospice settings, creating rituals and organizing events. They drew upon training they had received from Joanna Macy (The Work that Reconnects) and Francis Weller. Other teachers and mentors included:

“But you don’t need to create a 3-day workshop in order to help people process their grief,” Ellen said. “It can be as simple as inviting a few friends over and holding a stone ritual, like the one found at the end of Francis Weller’s book, The Wild Edge of Sorrow. It could be reading one of Joanna Macy’s books and doing the exercises in a small group.”

The three most important parts of the process are these:

Shante’ advises those who want to facilitate grief work to understand their own nervous system and trauma patterns. Some resources for this are Deb Dana’s polyvagal exercises, learning about the mind and body connection with Somatic Experiencing or the Rosen Method of bodywork, and the Ritual as Justice YouTube channel to explore trauma-informed ways of engaging in ritual.