The irony hit Katherine Kehrli, the associate dean of Seattle Culinary Academy, when one of the COVID-19 pandemic’s successive waves of closures flattened restaurants: Many of her culinary students were themselves food insecure. She saw cooks, bakers, and chefs-in-training lose the often-multiple jobs that they needed simply to eat.

“The pandemic has leveled the most marginalized members of our society—the people working two, three jobs at minimum wage,” Kehrli says. She knows the statistics by heart: FeedingAmerica.org says 50 million people may experience hunger and food insecurity this year. “Its tendrils,” she adds, “are nasty.”

Kehrli knew she wouldn’t be able to make the entire U.S. food system more equitable and just, but she did have an idea to help her local community. Six years before, after spending time in the culinary school’s bake shop, she’d gotten hooked on the alchemy of flour, water, yeast, and salt. She took workshops with master bakers and built a library of cookbooks on bread. Kehrli even started a regional network of people who shared her hobby: Northwest Bread Bakers. She loved to bake, and during the pandemic, other homebound Americans were beginning to feed sourdough starters by the millions. Kehrli wondered: Could a trending private hobby help meet wider needs? 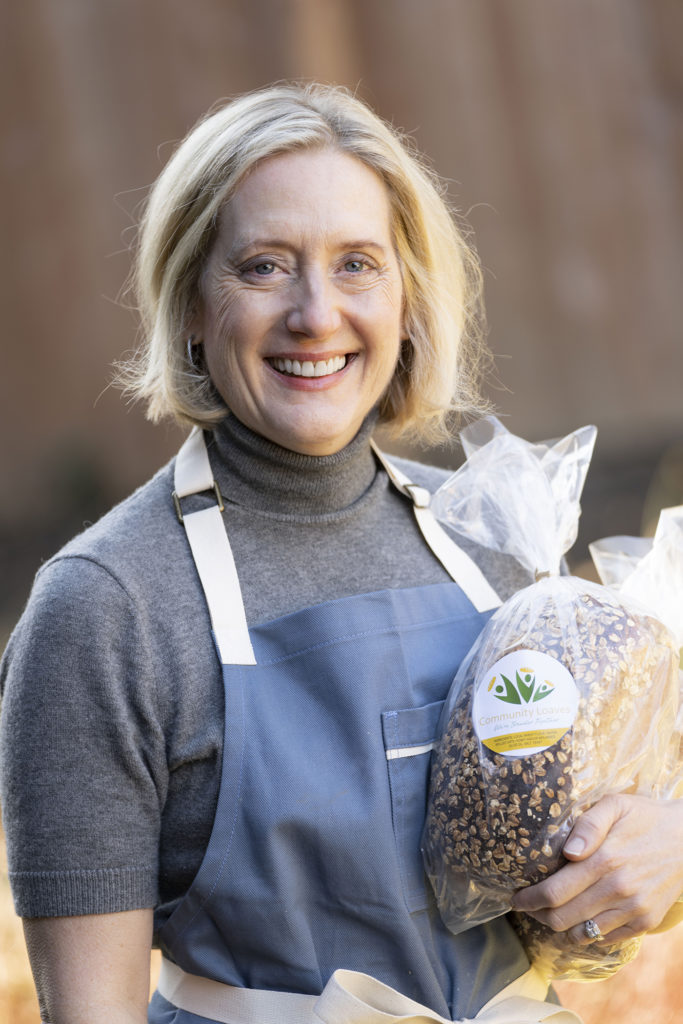 A little policy research showed that, in Washington, bread was one of the few homemade foods the state health department allowed to be donated to food banks without needing to be made in a licensed commercial kitchen. And so in April, from Kehrli’s home—where giant bags of flour eventually displaced the family car from the garage—the Community Loaves initiative was born. She called on a hive of baking friends to develop a sandwich-friendly, easy-to-execute sourdough recipe, the “honey oat pan loaf.” The group found a food bank in the Seattle suburb of Kirkland called Hopelink that agreed to take the bread if they could make and package it in a standardized way. That first batch, the initiative donated 19 loaves.

Ten months later, the numbers have mushroomed. Nearly 700 volunteer bakers, drivers, and flour packers have contributed to the donation of nearly 15,000 loaves to 11 food pantries around Seattle. Two Sundays a month, the individual bakers each make four loaves (three to donate, one to keep) that get distributed among 36 neighborhood hubs. Community Loaves is on track to give away more than 30,000 loaves before the end of 2021.

The initiative has already expanded to three locations in Oregon, and Kehrli expects to inspire other cities. She’s already gotten calls from bakers in Connecticut, California, and Minnesota wondering how they can replicate the idea.

The proud but visibly fatigued founder is braced for more in early January when she beams in for a virtual interview. Kehrli had been up until 3:44 a.m. the night before, she reports wearily, then up again at 7 and back in action with no shower or makeup. “I can’t sleep anymore,” she says.“I have stuff to do.”

One of her two college-age sons slips in a veggie bowl for her to snack on, because she hasn’t had time for lunch. Things will only intensify from here. The Today show is scheduled to air a national segment on Community Loaves in two days, and the project’s new website needs to be ready. In the middle of it all, someone shows up at the door needing labels, which had been delayed in shipping. Kehrli’s supportive, operationally involved husband, Tim, makes a quick decision: “I’m going to give her bags and twist ties,” he declares, “because that’s all I have.”

The work continues, because demand isn’t letting up. 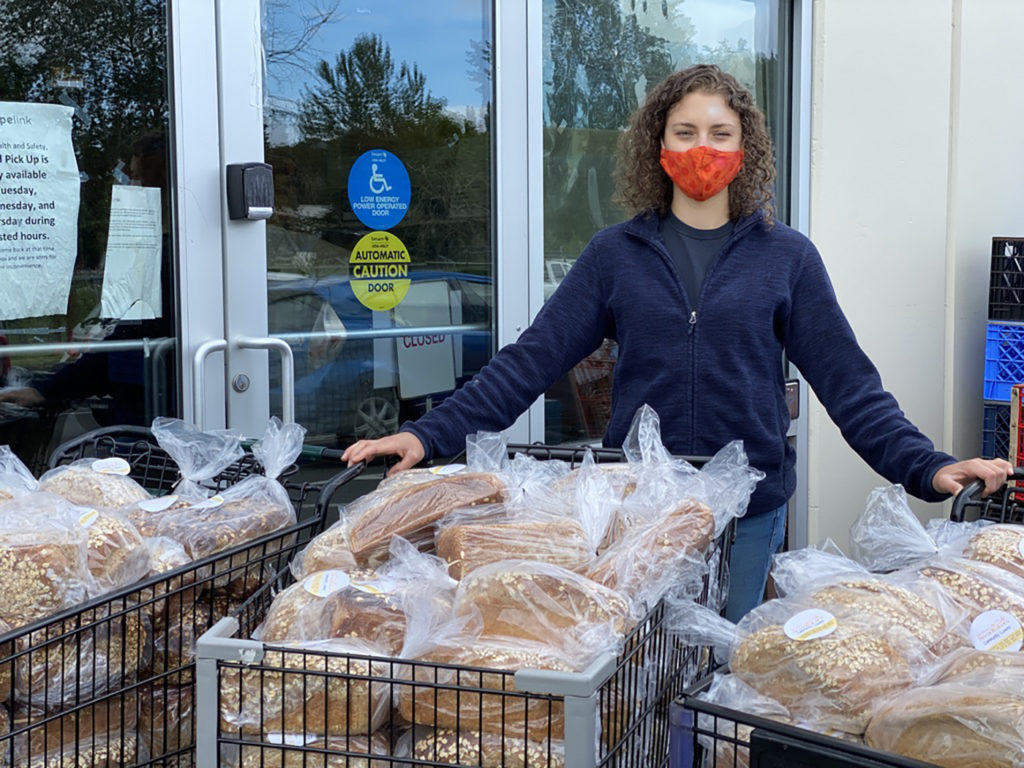 Nicole Novak, supervisor at the Kirkland/Northshore branch of Hopelink Food Bank, with donations of bread loaves. Photo from Community Loaves.

During the pandemic, mutual-aid societies have cropped up around the country, reviving an old concept with roots in the late 19th and early 20th centuries. The idea was that everyone had something to contribute, and everyone had something they needed. By 1920, a presidential report estimated that one in three adult men in the U.S. was a member of a fraternal society. During the 1918 flu pandemic, mutual-aid societies organized by and for women also multiplied. New Orleans, in particular, developed a strong mutual-aid tradition, with an estimated 135 organizations dedicated to supporting Black people, nearly one-third of them for women.

For today’s mutual-aid societies, the catch line is often “solidarity, not charity.”

Community Loaves, too, draws on the model of neighbors helping neighbors. And Kehrli took inspiration from an earlier time as well. Her grandmother, Ruth Wiesen, was known for making cookies, pies, or fudge for every bake-sale fundraiser, neighborhood social, funeral luncheon, or other community need. And she participated in the interfaith CROP Walks against hunger for as long as she physically could. When Kehrli told Wiesen about Community Loaves, her grandmother said, “I would’ve loved to have [baked for] that.” Wiesen died in 2020, at 105—but not before helping Kehrli put labels on Community Loaves bread bags, marshaling her frail 85-pound body and still-powerful will to help even from her nursing home. 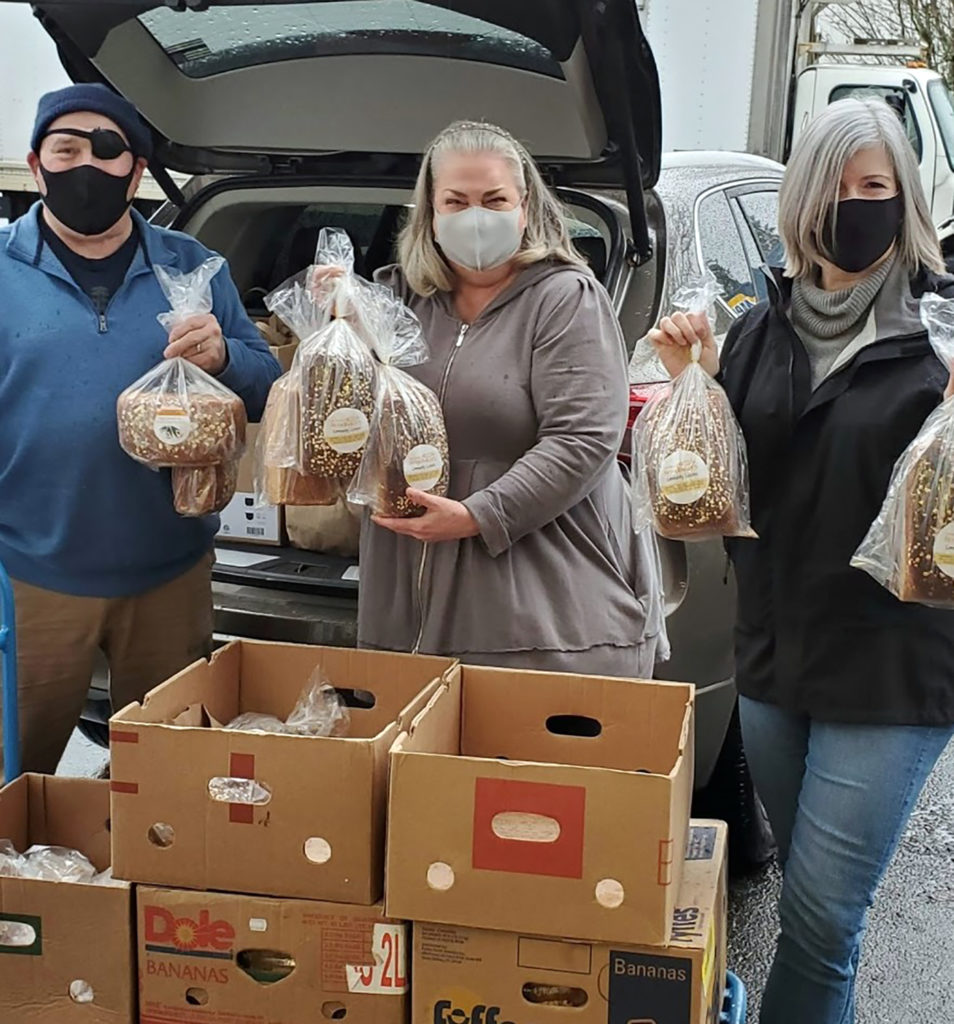 Sourdough donation isn’t widespread yet, but related efforts are out there. Kehrli drew on one Midwestern model, Neighbor Loaves, that uses commercial bakeries. And celebrated artisanal baker Guy Frenkel has started a similar initiative in L.A., Cast Your Bread, that has inspired chapters in Baltimore and Israel. Kehrli gets calls from around the country—she logs them on a “New Cities Interest” spreadsheet—and she’s expecting more. By April, she hopes to have expansion support in place, including a training session for others wanting to start something similar.

Still, Kehrli is dissatisfied with a food system that leaves people hungry—and is ever-conscious of her project’s limitations. “It is just one piece of work on a scale that is extremely large in terms of what’s needed,” she says. “Yes, we’re doing our part, and yes, I want us to feel good about it, and yes, it’s still not enough.”

Still, recipients who learn that volunteers are doing the baking appreciate the effort. Teresa, a Hopelink client in the Kirkland area who preferred that her last name not be used, says she was touched when she found out that fellow community members made the loaves.

Despite its limited scale, Community Loaves has a range of impacts, even beyond addressing hunger. One of them: expanding the market for locally grown, locally milled grains. The initiative uses high-extraction and whole grain flour. It’s bought wholesale from two regional mills, Cairnspring Mills and Fairhaven Organic Flour Mill, and then purchased in smaller units by bakers as part of their contribution.

“Flour has been relegated to the commodity market for a long time. Just like coffee and craft beer have gone through their days, flour is having its moment,” Kehrli says. “We are helping to educate and share that not all flour is the same. I think we are helping support an improved foundation for choosing local ingredients that have been minimally processed.”

The high-extraction flour has higher nutritional content, Kehrli asserts, including fiber and protein. People with celiac disease and gluten intolerance still can’t eat bread—but anecdotally, many with gluten sensitivity have reported the Community Loaves iteration doesn’t disagree with them. “We attribute that to the longer sourdough fermentation process and the quality of the flour,” she says.

Then there’s the effect on bakers, who not only give to others, but also benefit from connecting and contributing, safely and from home, during a pandemic. They come from a range of ages and backgrounds. Kinsley Ogunmola, for instance, a millennial software engineer, leads a hub in Seattle’s Queen Anne neighborhood. Up to 20 volunteers, ranging from 20-somethings to retirement age, drop off their loaves with him biweekly (he wrote a special code to let them into the building). From there, he coordinates transportation to the food pantry.

“Our lobby smells like a bakery every other Sunday,” he says. “My neighbor keeps asking me about bread now whenever I see him. I hope it spreads.”

Community Loaves starts volunteers off with an online introductory session, which Kehrli leads. She’s done more than 50 to date. At one orientation, in September, the range of the bakers’ experience was apparent. There was Diane Moore, who had celebrated her 50th birthday with a weeklong baking course in France. And there was Clare Chan, who had zero baking experience but wanted to volunteer along with her teenage sons Caelen Yoong, 16, and Lucien Yoong, 14. 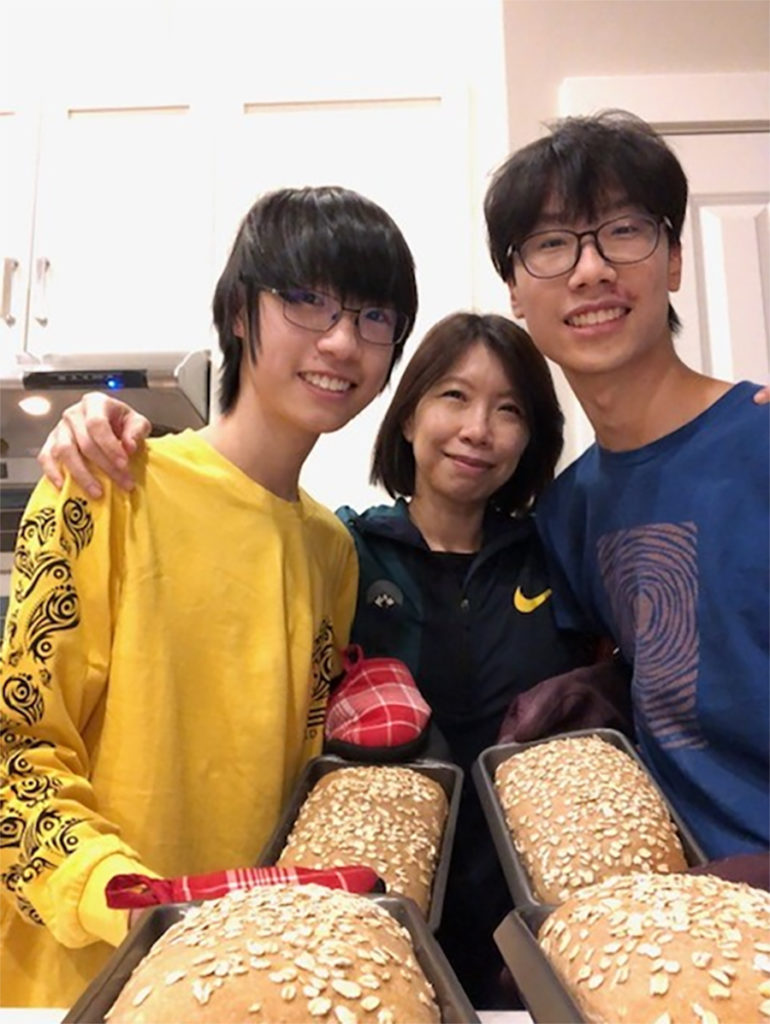 By January, Moore and Chan were both still involved and loving it. Chan reported that her family hadn’t missed a single bread-donation Sunday since they started. In her native Singapore, she used to volunteer in senior homes, but she loves that the whole family can be involved in this service, and she hopes they’ll keep it up even after the pandemic.

“It’s a humbling and rewarding experience for us to put in the time to make the bread and know that it’s going to families in need,” she says. “When you take the loaves out of the oven, that’s the best part.”

Moore had thought she might get bored making a sandwich loaf over and over, but found that consistency is its own challenge.

“It turns out it’s hard to perfect the pan loaf. It’s not as forgiving in some ways as an artisan loaf. I feel like each time I’m learning more,” she says. “This project nourishes me. It’s been a gift. I was just ready to hand off bread, but there’s a lovely connection to a community of bakers who share resources and recipes. It’s a joyful project, and rewarding.”

CORRECTION: This article was edited at 8:41a.m. PST on Feb. 26, 2021, to correct a misspelling of Katherine Kehrli’s name and to include Ed Nugent in a photo caption. Read our corrections policy here.