Donald Trump was right. There is a swamp. It’s not the ballast of the entrenched bureaucracies in DC that administer our laws. It’s the physics of planetary limits that will inevitably suck our civilization down into the graveyard of those that have gone before. How do we rescue ourselves?

I think about that all the time. I’m a “there must be a way” person, like millions of “solutionaries” who’ve come up with brilliant interventions in response to the assumption that “if everyone just… then we’d…”

What if everyone reduced consumption by 20% – we’d pull back from overshoot and collapse and “live well together within the means of the earth.” That was my big bet.

What if plastics were banned with strict enforcement and penalties – bags, toys, hospital throw-aways, packaging, manufacturing – and we went back to plant based and mineral alternatives used for millennia? I’d happily use waxed paper and paper bags and glass jars and rubber to give the rest of life some chance of a flourishing. Anyone remember when we used balled-up newspaper for packing breakables?

What if we cut fossil energy usage in half, and half again? Do you think that hasn’t been investigated, modeled, tested, deployed in some places? It’s not that we like oil. It’s actually foul. Smells foul. Tastes foul. But we like what it does for us, the energy slaves that heat our houses and run our machines.

What if we took seriously the many studies that say feeding the world through feeding fertility in the soil and freeing up land for smallholder farmers works far better than industrial scale agriculture?  Regeneration and ecosystem restoration are being tested and deployed globally. With excellent results. Why not work with nature to heal herself?

What if we paid countries handsomely to preserve their remaining jungles and forests, but only if they enforce preservation?

What if manufacturers were required to take back products at the end of their useful life and required to dispose of them safely or pay hefty penalties?

What if we solved dire poverty by simply sharing the wealth more fairly? Even just a little fairer to start. Two yachts instead of three. Three houses instead of four. Is it that we have no tools for implementing greater fairness without stripping our economy of the incentive to invent, invest, and bring products to market? There are so many ways to liberate excess wealth from the ultra-rich and feed it into well-being for all without anyone feeling even a teensy-weensy pinch, without anyone screaming socialism someone stepped on their toes. We don’t lack knowledge of mechanisms for increased fairness without tanking the real economy. Just ask Elizabeth Warren.

In fact, as she says, we have plans for everything. For buildings that heat and cool themselves. For organic farms that feed their communities. For non-toxic ways to have fun. For conflict resolution that doesn’t depend on scorched earth war. 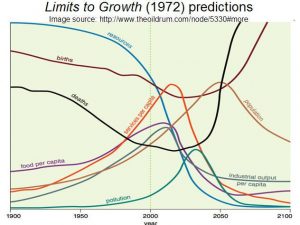 Don’t you ask yourself – maybe daily like I do – what’s in the way of doing any of this at sufficient scale and speed to actually reverse the damage and set life on a journey of flourishing? If frightening statistics would make it happen, it would have happened half a century ago. Something is missing. Something beyond what we have deployed in the past is needed. But what?

If you’ve been addicted to anything, you know how sly our minds are when we know we should change but don’t want to – or can’t. I’ve been an early adopter, for example, on fuel efficient cars – the first hybrids, the first electrics. I have a whisper touch on the gas pedal, glide to a stop, combine errands. But I’ve designed a life around having a car, so it would take a catastrophe to change that. Which, if you believe the climate science, is what’s happening. I have excuses. The ravages of aging. The distance to town. The inconvenience of arranging ride-sharing for everything. The social isolation from being out of step with society. The car is like a prosthesis, an extra limb that allows me to “run” an errand. And my society enables all of this because everyone is caught in it – or longs to get caught by getting a car in the first place.

If our biology, psychology and society are hooked, then what?

The first step, according to the incredibly successful Anonymous programs, is recognizing that whatever we are doing – however brilliant, respected, well-documented, approved-by-Oprah-or-Joe-Rogan – isn’t working. It’s not getting the result you want if you sincerely want to leave the planet in better shape than you found it.

To even ask this question without leaping to an answer is step one. To even admit you broke something precious and can’t fix it is the first step. Perhaps it’s just too much to feel the piercing grief of that. Our defenses come up. “Just because I live in the United States doesn’t mean I am responsible for the history of slavery.” :The plane would fly anyway, whether I’m in the seat or not.” Perhaps you are afraid to draw the ire of your tribe if you say the house is on fire. Perhaps you can’t bear feeling such nauseating shame.

Slow down. Breathe. Human beings are irrevocably decimating the world that birthed us. It’s not blame. It’s math.

Monty Python’s the Meaning of Life has a suggestion. In the scene “The Miracle of Birth: Part 2: The Third World” we see an impoverished family where the Dad, laid off from work, says to his 12+ kids he’s going to have to sell them for medical experiments.

DAD: I can’t keep you all here any longer! God has blessed us so much, I can’t afford to feed you anymore.
NIGEL: Couldn’t you have your balls cut off?
DAD: Hohh, it’s not as simple as that, Nigel. God knows all! He’d see through such a cheap trick. What we do to ourselves, we do to Him.
GIRL: You could have had them pulled off in an accident.

Isn’t this like many of our “if only they did this…” or “if only we did that…” solutions? They make perfect sense (at least to the kids about to be sent off for medical experiments) but if they violate a fixed belief without which life would have no meaning, they go nowhere.

We didn’t mean to do this. We meant to improve on Heaven. No one person woke up one day and decided to pull one thread in Gaia’s glorious garment and unravel the whole thing.

Paul’s answer is redemption in Christ. That we cannot redeem ourselves. We’ll keep doing what we don’t mean to do. Paul says that all things are possible in Christ. “If we just all believed in this beautiful representation of love, or any reasonable facsimile, then…”

It’s just that there’s no collective “we” that could have the faith of a mustard seed. “We” is a melee of fractious tribes that at very best takes a WWII Christmas break from killing one another and sings songs in the zone between the battle lines.  “We” aspire to being a “we.” “We” talk about “we” as if “we” could speak for all others. “We” blame others for what “we” are suffering. And “we all” do that.

I am coming to face that I’m only talking to myself and people like me when I make sweeping “we” statements. In the 1990s – when my team and I were working to lower consumption in North America by getting Your Money or Your Life into every hand of every American – we-the-team calculated that the sum of audiences for all the shows we’d been on meant we reached half the country. If that wasn’t enough “we” to move the needle on consumerism, what will be?

“The fault, dear Brutus, is not in our stars, but in ourselves, that we are underlings.”

How are they underlings? Yes, underlings to the powerful Caesar who intends to become emperor for life (sound like anyone we know?). Cassius and Brutus are not in positions of hierarchical power. Their status does not require Caesar to listen to them. They are also underlings in systems of power that define and enforce the rules, either legally of socially. What rules? Whose rules? The ones that were here when we got here and have become so resilient, and so pervasive, they’re just “the way things are done”. This is a formidable prison. Everyone is in it – Caesar, Brutus and Cassius. They play their hands, but the deck was crafted by history and culture and biology adapted to small tribal groups in large hunting territories.

We are rounding the bend to a climax, like Act 3 in a Shakespearean play, still arguing with the fates. Much cascading damage is well underway. Yet by this Act it feels the course is set, the tragedy will unfold.

This is how I see it now. We are trapped in a set of rules, customs and the anti-social grifters who lock in advantage but don’t actually control it: the rules of debt-based money, the rules of the financial markets, the rules made by politicians beholden to Wall Street, the rules of capitalism without compassion or conscience – which drives exploitation of land, people and cultures to the very last drop. “We’ve” set all this in motion, but “we” have no kill switch, no governor, that can stop the process.

In the Sorcerer’s Apprentice by Goethe, later popularized in Disney’s Fantasia, a young apprentice overhears his master’s incantation to start a process (and uses it to fetch buckets of water to mop the floor) but doesn’t know the incantation to stop it. All of his efforts to stop what he’s started only make it worse. Only when the sorcerer returns and stops the process is the apprentice saved.

Likewise, it seems to me that we have unleashed energies we are not yet mature or wise enough to stop. By the first “we”, I mean the machinery of progress initiated by Western Europeans in the Renaissance and potentiated by the banking system and fossil energy. And the second “we” is the current fractious mob of tribal humans, caught in the jaws of destruction, who will not budge. Retribution, belonging, fear of banishment, fear of judgement, norms, and the ballast of normalcy are all powerful magnetic forces binding members of tribes together. Tribes of territory. Tribes of shared pain. Tribes of whoever they hold as the one true God. Tribes of class. Tribes of race. Tribes of the music, drugs, TV programs you prefer. Tribes of the victims, banding together. No enlightened, conscious, evolved “we” can open such jaws. Somehow, we the people need to become a “we” that can choose to stop the machine.

I am personally humbled before this predicament. I invite you to be humbled alongside me as we contemplate what we have unleashed. To let it stun our clever minds, abort our frantic protocols to save us, break our hearts finally as we feel the suffering caused by this incantation that we are not yet able to shut down. I am grateful to all the truth tellers who unsentimentally named our predicament – and stopped even my good works and good intentions long enough to feel the cost.

The first step: admit we are powerless over this addiction to the expansive energies of money and oil. And admit that life on earth has become unmanageable.

Nothing more. No more steps. Can “we” admit that “we” don’t know what to do.