To the extent that stock prices reflect expectations of future value, investors don’t like the prospects for oil, and oil’s demise signals muted prospects for economic growth.

Exxon-Mobil (XOM) was removed from the Dow Jones Industrial Average this past August, ending a run that began when the Dow expanded to 30 stocks in 1928. This leaves Chevron as the sole oil company in the index. For most of those 92 years, there were three oil majors in the Index (Standard of NJ/Exxon, Texaco, and Standard of CA/Chevron) – now there is one. Should you care?

In one sense, no. The Dow is an actively-managed index, and 11 of the current 30 firms have replaced other names since 2000. (Exxon-Mobil was replaced by Salesforce.) The financial media treats changes in the Dow as measures of overall market levels, but little money is actually invested in DJIA-linked products. There’s an interesting article in all that, but it’s not this one.

On the other hand, the Dow committee likes to include industries and companies that are growing and successful. Removing XOM is a measure of the decline of the economic status of “big oil.” Over the last two months, both XOM and BP have approached their lows from this past March, which were in turn the lowest prices for those stocks since 1994 (BP) or 1997 (XOM). The S&P 500 has grown by a factor of four since 1997.

The WTI price of oil is (as of October 2020) around $40 per barrel, which is the lowest since 2003 on an inflation-adjusted basis except for a brief period at the start of 2016 and a few weeks this spring. This reflects the abundance of oil supplies after the COVID-induced demand collapse, but it also is a price below what’s necessary to operate much of the industry profitably. The number of bankruptcies in the U.S. oil industry, especially among firms involved in fracking, has reached record levels this year – 44 in the third quarter of 2020 alone.

Oil has been described as the “master resource,” the most important commodity in the world economy. We still live in a material world, and almost everything that moves more than a few miles does so powered by oil in one of its forms – aviation fuel for planes, diesel for trucks and trains, gasoline for cars, and bunker fuel for ships. Some railroads are electrified, and perhaps 1% of the cars and light trucks in the world are now electric vehicles, but those are the exceptions. Oil (and related natural gas liquids) is also the main ingredient in plastics and chemicals that make our food supply possible. When the physical economy declines, the demand for oil does as well.

The world’s oil production (extraction) reached a level in November 2018 that it hasn’t matched since. Further, when U.S. production is excluded, world production peaked in 2016, four years ago. (See figure 1) Current extraction levels are more than 5% below those of a year ago. 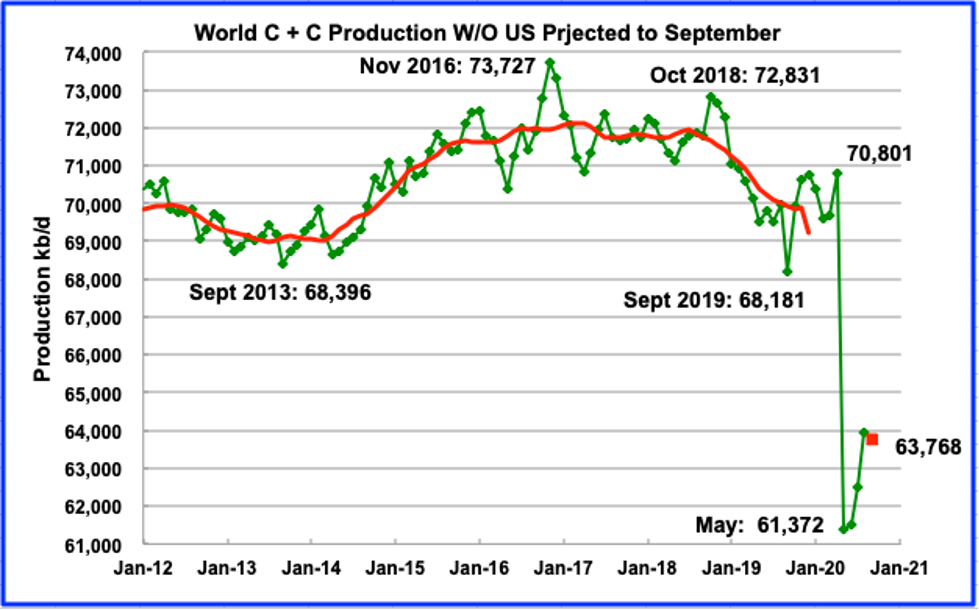 If demand for oil stays low, it will be an indication that the economy overall has not recovered. Conversely, if the supply of oil is not adequate, the economy will have a hard time growing. If oil use recovers fully and resumes its growth, that will make cutting CO2 emissions and limiting climate change almost impossible. That creates an important question – have we reached peak oil demand or peak oil supply? Maybe it is both.

As a result of the global shutdowns from the COVID-19 pandemic, many parts of the global economy have collapsed. For one example, Lufthansa estimates that it will have only about 20% as many flights in the fourth quarter of this year as during the same period in 2019, and many in the airline industry think that passenger traffic will not return to old levels until at least 2024, and possibly never. Even though travel is picking up somewhat, the TSA is screening fewer than half as many passengers as it did a year ago. The restaurant and entertainment industries have been crippled, and massive unemployment reduces the demand for stuff, and thus the need to transport goods around the world.

If all forms of transport are reduced, then the demand for new planes, ships, and cars will also be cut back, further extending the economic depression. Some part of demand destruction is the result of technological transition, but that will take decades to happen at scale. In a recent report, BP believes that the globe has passed peak oil demand, and that we will never use the amount of oil used as recently as a couple of years ago; the French oil major Total says it expects peak demand around 2030.

There’s another aspect of peak demand, and that is environmental regulation and the fight against greenhouse gas emissions. The Trump administration has reduced regulations and standards in the U.S., but the Biden administration will try to reinstate emission-cutting rules. Any serious efforts to limit global climate change will have to address oil use, but restrictions will come with a cost in terms of economic activity. (Failing to act also comes with a cost, of course.) Vehicle electrification is one of the most visible aspects of an environment-based transition from oil, but it is just getting started. Fifteen years from now a majority of the cars on the road are likely still to be oil-powered, and electrifying planes, ships, and big trucks is even further off.

Will there be enough oil even to satisfy this declining demand? Where are we on peak production? More than half of the increase in global oil production over the last decade has come from American efforts variously described as “fracking,” “shale oil,” or “light tight oil” (LTO) – as pointed out earlier, non-U.S. production peaked in 2016 – so that is where we should start.

Fracking involves drilling lengthy holes (often a mile down, then two miles sideways), lining the hole with steel pipe, then exploding massive quantities of sand and treated water (more than a ton per yard of pipe) to open up pathways in very solid rock for oil to pass through. A typical well costs $8-12 million, and involves hundreds of truckloads of pipe, sand, water, and chemicals. Usually, oil starts flowing immediately, but the flow drops by half in the first year, another half in the second and third years, so that about 90% of the total oil the well will ever produce comes out in the first three years. Over 10 years, production from fracking in the U.S. has risen from 1 million barrels per day (MBPD) to over 8 million, saving the world from shortages.

Two pictures illustrate the role of fracking in the US. The first, figure 2, shows total American crude oil production from 1940 to 2019. As can be seen, output rose steadily until 1970, then declined until 1978 when Alaska and the Gulf of Mexico started up. The decline resumed in 1987, continuing until fracking’s contribution was felt in 2011.

The American story is further shown in figure 3, which shows production by state since 1970. Fracking has been a factor since about 2010 in Texas, North Dakota, New Mexico, and Oklahoma, and there has been growth in the Gulf of Mexico, but the steady declines everywhere else are readily apparent. 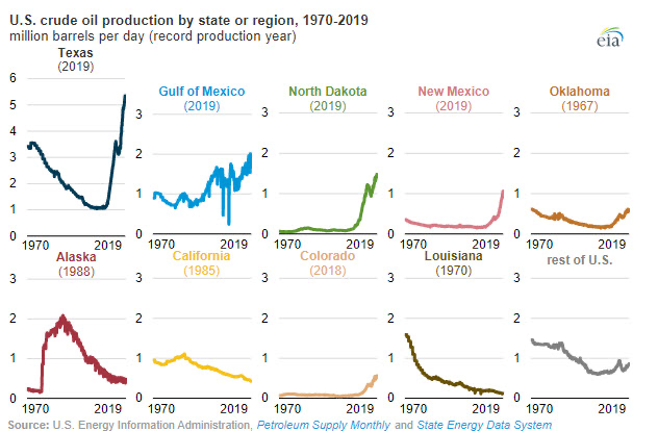 Unfortunately, there are three major flaws in the fracking model. Fracking works best only in so-called “sweet spots” where oil concentrations are highest, and those are being drilled out. (The first two major U.S. oil fracking plays – the Bakken in North Dakota and the Eagle Ford in Texas – are already in serious decline, leaving only the Permian Basin in Texas and New Mexico that is growing.) The rapid decline rate of individual wells requires continued active drilling merely to stay steady on an overall basis. Third, fracking has never been profitable on an industry-wide basis, and has relied on a steady supply of capital from investors looking for returns in a zero-rate world.

In order to keep up with declining production, there should be at least 400 active drilling rigs in the US. In January 2019, there were 880 in operation, but by September 2020 the number dropped to only 183. With an oil price around $40, far below the break-even point estimated in the range of $55-70 per barrel, investors are not eager to throw more good money after bad. Further, it takes about a year from the time a decision is made to proceed and funding is obtained before a well can be completed and oil produced. Many experts think that the problems with fracking will cause U.S. oil production to drop from almost 13 MBPD bpd at the end of 2019 to less than half that by next summer, possibly as little as 5-6 MBPD.

One startling statistic illustrated the scope of America’s decline. The U.S. is on track to drill fewer than 11,000 oil wells this year. This compares with 22,000 last year, 25,000 in 2018, and over 40,000 earlier in the decade. The previous low records were 12,170 in 1933 and 11,716 in 1931. Before then, the last time Americans drilled fewer than 11,500 wells, William McKinley was president, and both the Ford Motor Company and the Wright brother’s first flight were years in the future. Granted, today’s wells are more productive than those of 1897, but this collapse is truly remarkable. 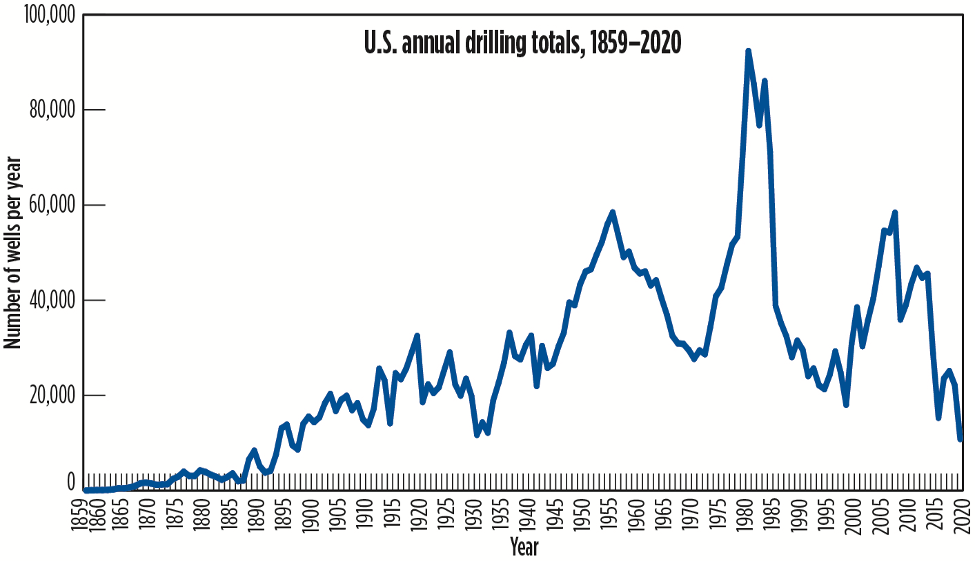 Looking elsewhere in the world, a number of leading oil producing companies experienced major declines even before the COVID-induced crash. Venezuela, which once produced over 3 MBPD, is now producing less than 10% of that, and could stop entirely next year. For reasons ranging from political unrest and sanctions to simply exhaustion of oil fields, Angola, Libya, Iran, Nigeria, Mexico, and China combine for another 5-6 million of lost production (again, pre-COVID) compared to 5-7 years ago. UAE, Iraq, Brazil, Canada, and Russia had all grown over that period, but many of them will have difficulty maintaining, much less increasing, production from here. With declining exploration efforts around the world, it is not clear where additional oil supplies could come from. Today that’s not a problem, but it could be in the near future.

With any commodity, the easiest-to-get is produced first, and future supplies come only with new sources, more effort, and usually higher costs. The current price of oil is far too low to search aggressively for and produce what’s left. (The oil consultancy Rystad estimates that discoveries since 2014 are only one-fourth of the oil used globally.) On the other hand, the global economy is sputtering, and with COVID in its second or third wave, is not likely to get better soon, so a high price for oil would further destroy demand for oil and everything that is produced from or moved by it. While we once assumed that “peak oil” would lead to much higher oil prices, as happened briefly in the 2007-2013 period, it is equally plausible that the resulting slow economy could lead to permanently depressed prices that are all a poorly-paid workforce can afford.

Returning to Exxon Mobil and the number of bankruptcies in U.S. oil, oil supplies could decline fast enough to prevent a robust economic recovery after COVID. This is good news for the fight against climate change but not for economic prosperity.

Is there a path out of this challenge? Yes, if we face it openly and design a future that requires less energy and less material throughput, but it will not look like what we have been used to.

Are There Limits to Economic Growth?

Oil Abundance? Not So Fast- A Risk Checklist