A half hour from El Paso, TX, lies a small, young town that is piloting a creative local food program to help keep residents fed and encourage entrepreneurship—all while focusing on native plants that grow quickly and cheaply.

Although it has a long history, San Elizario was only formally incorporated a few years ago, in 2013, in response to an annexation effort by a nearby community.  It’s a small town of about 9,000 people and local leadership is currently figuring out its future.  “We’re still kind of in the process of setting a foundation for our city with necessary ordinances and regulations, and how we want to develop our community,” explains Maya Sanchez, City Administrator of San Elizario.

For quite some time, the region’s main economic driver has been agriculture.  One crop that has been a particular strategic focus for local growers is gooseberries, also known as husk cherries, which are native to the Chihuahan Desert where San Elizario is located.  The community has determined that by cultivating this plant for seeds, they have the potential to be a major player in the global market for gooseberries.

Now the city wants to help more residents get in on the farming game—at a scale that is feasible for home-growers and in a manner that works well in the desert climate.  In an effort to turn under-utilized land into food for families as well as business opportunities for entrepreneurial residents, earlier this year, the city of San Elizario partnered with Auburn University to start their “City in a Box” program.  The program distributes packages to interested residents containing seeds, raised beds, soil and step-by-step instructions for cultivating fast-growing, seasonal native plants.

This is no hippie gardening project; it’s a robust yet small-scale effort to make San Elizario more resilient and self-sufficient, growing their own food rather than relying only on outside sources. 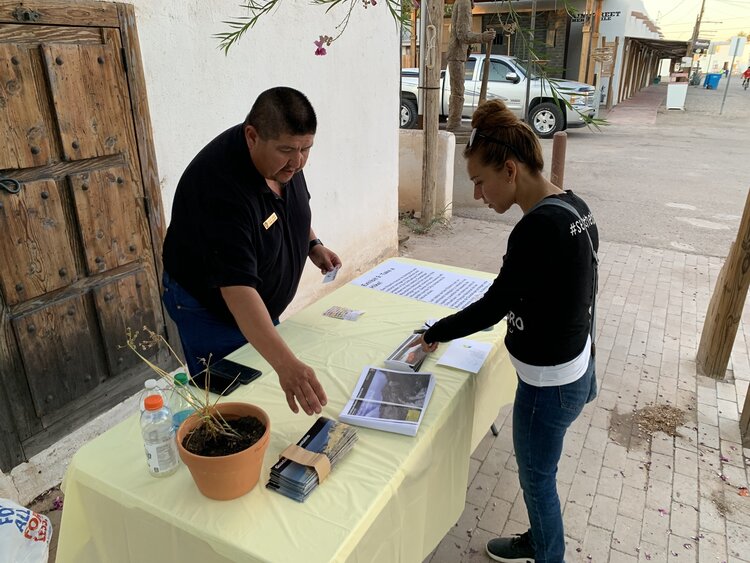 Part of the 2019 “Bee Real” program. Image via the City of San Elizario (Facebook)

Residents who participate in the program can partake in three levels of investment: some may just be interested in beautifying their desert lots, others may want to grow food to feed their families, and still others may be so passionate about that project that they are ready to turn their small-scale farming into a business.

This program is particularly valuable because the town of San Elizario doesn’t have much local food access.  Sanchez reports they have just one grocery store in the city limits (a small locally owned market), and that most residents choose to drive 15-20 minutes outside the town to get to a larger chain supermarket.

For a community where the median household income is around $20,000 a year, access to homegrown food can make a big difference.

In addition to the local benefits of the program, Auburn University is also collecting data on the success of these growing efforts to better understand plant disease, desert water use and other agricultural questions.

The seeds in each City in a Box are selected specifically for their ability to grow quickly on small amounts of land with a high success rate, and many are well positioned to be marketable outside the region as well.

“Part of why farmers are dying out and people are less interested in agriculture or even home gardening [today] is because the failure rate is so high, because you’re forcing plants to grow that shouldn’t be growing in the first place, and the weeds that should grow there take over,” explains Sanchez. “We’re working with our natural climate and our resources.”

City in a Box also offers something intangible for the community of San Elizario: a chance to reconnect with what Sanchez calls “our ancestral diet” and bring back food cultures and traditions that have been lost over the years, through cultivating native plants.

San Elizario Alderperson David Cantu says 35 families have participated in the program, which operates in cycles, offering a new box every few months.

The City in a Box program has adapted fairly easily to the current pandemic because so much of it operates outdoors, at peoples’ homes and not in a large group setting.

San Elizario has also adjusted some of their other local farming-related programs to work under pandemic conditions.  One of their annual events, “Bee Real,” highlights the region’s extensive diversity of bees and usually includes festive gatherings, food and education.  (Watch this video to get a brief look at that.) This year, at small “pollinator parks” throughout the town, residents can pick up take-home kits that include food, activities and more—still connected to education around insects and biodiversity.

For the city of San Elizario, these efforts are all about using the resources present within the community—plants, land, and residents’ energies and passions.  Instead of trying to attract a big grocery store or agriculture company, this community is operating at a small scale that works for them, then building off their successes.