Once an award-winning journalist and slam poet, Elizabeth Vega has upped the ante in her work to change the system, putting her voice and her body on the line time after time to raise awareness about the violence of racism. From the streets of Ferguson in St. Louis, Missouri, where she was a key player in the Uprising of 2014, to the gates of the Tornillo child migrant detention camp and the Border Patrol Museum near El Paso, Texas, she’s taken her eloquence and her passion for justice with her to the jails of both cities, more than once — most recently after a direct action in Louisville, Kentucky, which she once called home, in honor of police victim Breonna Taylor, a 26-year-old African-American emergency medical technician who was fatally shot in her home by Louisville Metro Police Department officers on March 13. Following that experience she penned an eye-opening piece sharing some of her insights.

The piece brought to mind the words of Henry David Thoreau from a jail in Concord, Massachussetts. He was there to protest the war in which the United States took nearly half of Mexico’s territory; asked by his good friend Ralph Waldo Emerson why he was there, as the story goes, he turned the question back: “Why are you NOT here?” Without saying so, Vega’s work challenges us in the same vein.

This piece originally ran on Vega’s Facebook page. You can follow her there and also at St. Louis Art House, where you can find her serving residents with everything from mental health support (she is now a counselor), political education, a food share program and art activities for local children.

The bridge action done with Black Lives Matter Louisville was truly beautiful. Relationships were formed between cities. The action was strategic and joyfully rebellious. There is a different energy when arrested for something audacious. It is empowering especially when it is rooted in true black, brown and white solidarity. Yes, it went viral. Yes, it will likely inspire others. And yes, a mere two hours after the bridge was shut down the state announced it would be investigating Louisville Mayor Greg Fisher and the Louisville Police Department.

Art, non-violent civil disobedience and protest do work. While I am proud of the action, I want to talk about a part of this work that few folks are discussing — how we can and must continue the work where it is needed most: IN THE JAILS.

When 44 activists and protestors get arrested at one time, it disrupts the system from within. From our chants that echoed through the building, to the insistence that the humanity of all within those concrete walls be recognized, to the documentation of civil rights violations and the sharing of stories by the most marginalized, this is also very much a part of the work; work I have personally done in St. Louis, Memphis and El Paso. I know it to be even more essential after spending over 24 hours in the WORST JAIL I HAVE EVER BEEN IN. Louisville jail is blatantly violating people’s civil rights on a grand scale and needs to be held accountable.

I was the last one bailed out after Monday’s action. Once my comrades left, I spent hours in a cell alone, singing, praying, meditating and yes at times crying. I was exhausted and a bit scared. This is NOTHING compared to what thousands experience every single day in this country. I had the privilege of knowing there were people on the outside advocating for me. Grounded in this, I wrote soap graffiti messages of solidarity and love all over the cell, knowing it would prompt a good wipe down (covid precautions) and it would be inmates who would have to do it. I was moved to general population five hours later. Thinking I was going to get out, I was thrown off when I was told they dug up an 11 year old traffic warrant and could hold me 10 days. They were also calling me by my married name which I haven’t used in almost 30 years. I knew it was the system messing with me but again that is what it was designed to do and I am far from alone in this.

The first person I encountered was Cheri, a beautiful dark skinned young black woman (I write this because colorism is as real as the racism it stems from). She surveyed my all black outfit and said: “You are one of those bridge protesters. Good job. You did the right thing.” Exhausted and worried I immediately broke down and cried. She wrapped me in her arms and led me to the phone so I could try to make a phone call using her code. It didn’t take long for my tears to turn to anger about the blatant human rights violations in this jail.

Folks were being denied their daily medications not just for a day or two, which is bad enough, but for WEEKS. Some of the women were on the same anti-depressant I was on which has significant side effects if stopped abruptly. A woman was in active withdrawal beside me. There were no masks, except for the employees and no social distancing. Worse, these women, many who have not yet been found guilty of anything and are awaiting court, were denied access to a phone, again not for a few hours but for several days. Imagine getting put in jail and being unable to contact anyone simply because the “counselor” who is supposed to help you get access to all of this is refusing to do his job. The women said it had been several days since he had even stepped into their pod. The female “counselor” was just as bad and after I pushed her on the ethics of ignoring civil rights violations simply told me to step away from the door. I have her name and fully intend to report her to the counseling board.

I spent my time with the women in true solidarity. I used my counseling skills. I taught Cheri and another woman how to meditate. When it was time to clean the pod, I volunteered to clean the toilets to break down class hierarchy and also as an act of solidarity and love. 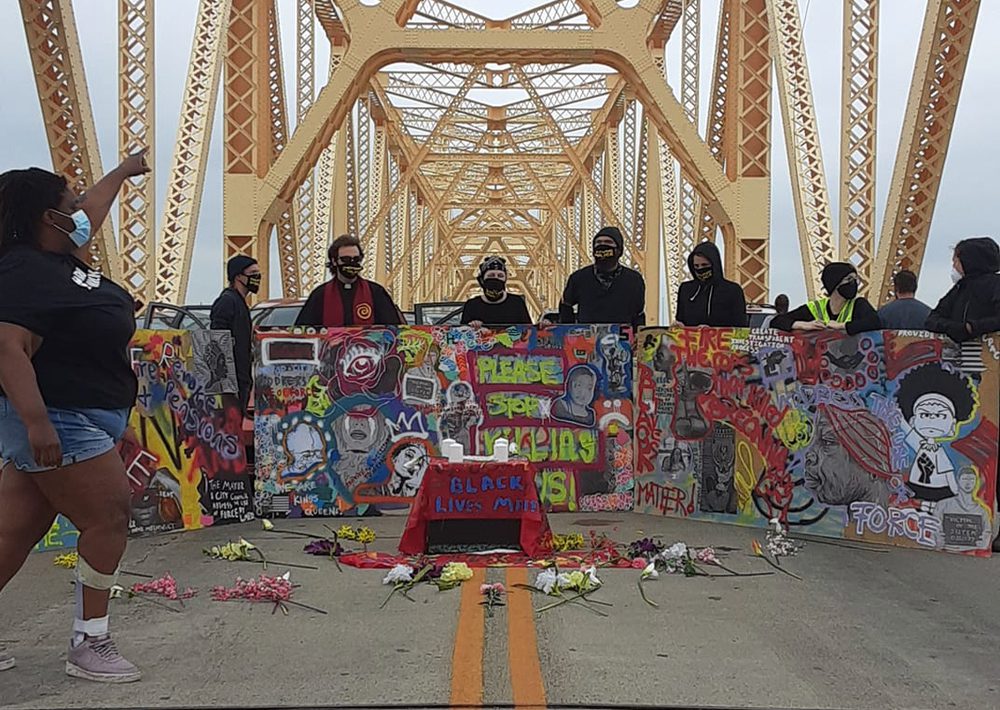 The ofrenda, or altar, created to honor the lives of police violence victims. (Facebook/Courtesy Elizabeth Vega)

I heard many stories while in jail. One woman was locked in jail for missing a court date when the court closed because of the pandemic. Without a phone she was unable to contact anyone to prove this and had been in there a week. This is apparently happening all over the country. Under the best of circumstances a week is long enough to have profound impact but for someone already marginalized it can create the cruel unraveling of a life from which few can recover. The sex workers knew all the dirt on all the cops and had many stories to tell that could result in police actually getting fired. Then there is Cheri who days later I cannot stop thinking about.

Cheri came back from court, with a steady stream of tears running down her face. She is a mother of three. The father of her youngest son was extremely violent. When he pulled her by her hair and knocked her out, she took out an Emergency Order of Protection. Problem was, the police did little to enforce it. She listed the numerous violations, including him knocking out all the windows in her car just a few weeks ago. When he showed up at the daycare she took matters in her own hands. Shots were fired. Nobody was injured. He called the police, a clear violation of the EPO and yet the police arrested them both. Now they are both being held on a $50,000 cash bond! She paid $500 for a lawyer who instead of getting her bond reduced, said she could go home with an ankle monitor IN A WEEK. She paced and worried about her kids. She worried if she would have a job to return to and how she would support her children. The same judge who ordered the outrageous bond was the same judge who locked her up when she was 6 months pregnant after she took too long to answer a question. “She told me that I took too long to answer so it must be because I was thinking up a lie.”

From the borderlands to the South to the Midwest this is our system — broken, corrupt and guilty as hell. Chanelle Helm, who heads up Black Lives Matter Louisville said exorbitant cash bonds are happening more and more. With no access to that kind of cash, the jail becomes even more of a debtors prison.

For this reason, Helm is raising funds and bailing out women like Cheri. The non-profits think this is too risky so they don’t bail out anyone who has a bond higher than $5000. Helm is a true grassroot organizer, committed to liberation. For her this means not only bailing out these women with cash bonds but giving them the support they need to not only show up for court but to rebuild their lives during and after the process. This is the truly radical abolition work that is needed to change the system from the inside out, not as an employee but as activist infiltrators within the jail. How do you find those forgotten in the system? You organize in such a way that gets you inside the belly of the beast.

I’m going to be honest that I am weary of marches and rallies. I think we are in the beginning stages of an uprising. But it is long overdue for us to band together regionally and start to think strategically. If we are going to be arrested anyway for exercising our civil rights, then let’s be bold in how we shut things down. Let’s impact economy and commerce with non violent civil disobedience on a large scale and coordinated mass arrests that flood the system. Once inside, let’s do political education, healing work and advocacy work and organizing of both people behind the cells and those running the jails. Yes, you heard me right. Helm pointed out to me that as in most jails, correctional officers are low paid black and brown workers. They make little more than Walmart wages. Despite the divide they can also be persuaded to be accomplices. I know this for fact.

While we were there I witnessed a two hour discussion on racism between the staff. Several of us chimed in from inside our cell and now I’m thinking of sending political education books to one of the officers to further the conversation. Moreover there are already allies on the inside. When we were finally taken to get our codes so we could use the phone (after we all started raising hell when I pointed out denying us this was illegal) a correctional worker, looked at my file and asked: “why are you here? You are supposed to be out.”

“I’m one of those bridge protesters. They are fucking with me.”

Surveying my file again, she said. “Yeah they are.”

Then raising her fist quietly behind her computer added: 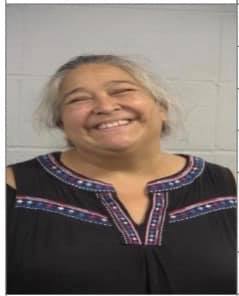 Pics, the mugshot you take when acting on conscience and shutting shit down beautifully.

The solidarity of 44 arrests.

Elizabeth Vega is an “artivist” based in St. Louis, Missouri. A mother and grandmother with a masters in counseling, Vega founded Art House in a high-crime, high-poverty neighborhood of the city, where she provides mental health support, political education, and a food share program serving over 100 families eight times per month.