For generations, a variety of factors have weakened the traditional intergenerational socio-cultural structures of Indigenous people around the world.

In our globalized, urbanized and hyper-connected present, an especially pronounced disconnect between Indigenous youth and their elders has formed. Indigenous elders have always been the pillars and respected sources of ancestral wisdom and traditional knowledge for Indigenous communities, so this is a profoundly troubling trend for many communities. It is a prevalent concern of a diverse range of Indigenous ethnic groups that I work with in Colombia that while physically they may survive into future generations, culturally they will be severely weakened.

For particularly vulnerable Indigenous ethnic groups like the Koreguaje of the Colombian Amazon there is a fear that when the few remaining Koreguaje elders die, the Koreguaje culture will die with them, unless the transmission of traditional knowledge between elders and younger generations is fortified.

“We must find a way to synergize our anxious youth with our ancient roots, and return to the essence of the Mother Earth,” Koreguaje leader Juven Piranga recently told me from his home in self-isolation.

And here lies a potential silver lining in the current tragedy sweeping the world with COVID-19. Due to the novel coronavirus pandemic, many Indigenous people have returned to their ancestral territories. These vulnerable communities are now isolating themselves in efforts to block the entrance of this highly infectious respiratory disease, which they know could wipe them out.

“This is an opportunity to reconnect with our origins,” Jesus Rotieroke told me while he was preparing to evacuate the town of Solano, Caqueta, with his family at the end of March. Rotieroke is a leader of the Muina Murui ethnic group of the Colombian Amazon and has since headed back to the isolated territory of his people, disengaged from myself and the rest of the outside world.

So what does it mean for Indigenous people to “reconnect with our origins,” and why is this process so important?

Indigenous socio-ecological systems and worldviews are complex and diverse, so the details of Indigenous people reconnecting with their “origins,” territories, youth, traditions, the “Mother Earth,” and other interrelated deep beliefs and practices, are widely variable and depend upon the present biocultural and geographic reality of each community.

There are some fundamental common threads, however, that have been weakened in traditional cultures across the globe through decades-to-centuries of pathogens, forced enslavement, religious indoctrination, language suppression, boarding schools, land grabbing and displacement. In the process of reconnecting with their origins during this time of voluntary self-isolation, these vital threads can be partially revived and weaved back into the social fabric of Indigenous communities.

In most Indigenous worldviews the Mother Earth is a sacred and interconnected living entity, where humans are one of many living and evolving “persons,” interdependent on her complex balance and survival. In my experience, all Indigenous ethnic groups have beautiful “origin stories” and worldviews that are explicitly connected to the ecosystems of their geographies. For example, in the holistic worldview (“Kunsamu”) of the deeply spiritual and traditional Arhuaco ethnic group of the Sierra Nevada de Santa Marta in northern Colombia, the glacierized Sierra is considered to be the center of the universe. The Arhuaco “Law of Origin” is an integrated interpretation of the complex masculine and feminine forces balancing what we call “natural cycles” and evolution. 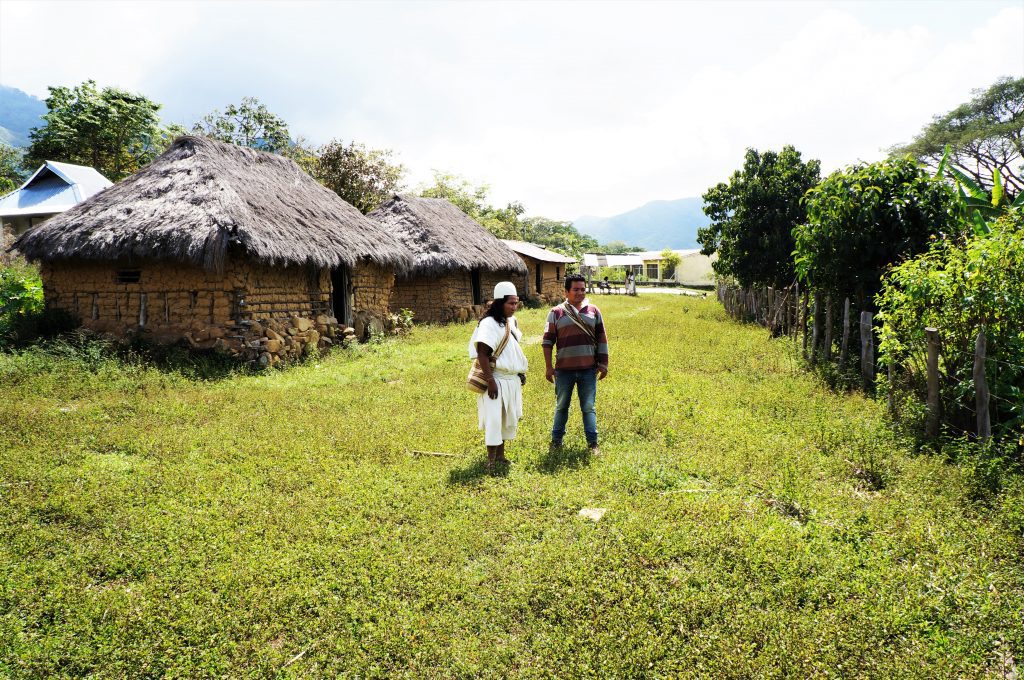 Whether Indigenous cultures believe themselves to have been born from mountain glaciers, lakes, majestic rivers, animals, rainbows or the cosmos, all of these origin stories and wider worldviews reinforce a deep connection and reverence for the ecosystems of their territories. In a generalized metaphorical sense, “reconnecting with our origins” for Indigenous people means reestablishing and/or fortifying a profound interdependence with Mother Earth, which includes a range of traditional practices and social structures that have been severely debilitated since colonial times.

Autonomy and traditional self-governance is already being recovered in many self-isolating communities. With limited or no state presence and low expectations of humanitarian assistance from both governmental and non-governmental entities during this uncertain period, many Indigenous communities — at least those that I am personally familiar with — have already returned to full self-governance mode, with intentions to strengthen their “Indigenous guard.”

While many Indigenous communities do maintain some semblance of these traditional autonomous governmental structures in “normal” times, they are often heavily influenced by outside forces, and Indigenous leaders are constantly going to different meetings outside of their territories. Now with COVID-19-induced isolation, a more traditional form of self-governance and community dialogue has the opportunity to reestablish itself, with variable but potentially profound results.

Furthermore, many traditional practices and integrated structures, from self-sustaining integrated food-systems and medicines, to handcrafts, “own” education and cross-community trade, will likely all be reinforced out of necessity during isolation. For those traditional cultures currently at risk of losing their languages, this time could also be a critical opportunity to ensure younger generations are prepared to transmit this vital heritage to their children in the future.

For many vulnerable Indigenous communities, this new reality of self-isolation does come with extreme risks and challenges — to physical, water, food and energy security— but for those communities (hopefully all) able to remain isolated and protected, their autonomy, pride, languages and traditional governmental structures could be beneficially strengthened and uncorrupted by outside socio-economic, religious and political influences during this time.

According to Jhon Jairo Figueroa, president of the Koreguaje association CRIOMC of the Orteguaza River in Middle Caqueta, “food security of our population currently depends on the commercialization of some agricultural products produced in the chagras that are sold by our elders, over 55 years old, on weekends in populated centers and municipalities. Measures taken [to control the spread of COVID-19] by national, departmental and municipal governments, do not allow our elderly to go out, leading to shortages of basic products for our families and livelihoods.”

But many Indigenous people are recognizing how unsustainable this kind of dependence is. “It is not the identity of the Koreguaje, or other Amazonian Indigenous peoples, to be dependent ‘charity cases.’ We are traditional harvesters, gatherers, fishermen, occasional hunters and traders amongst ourselves,” Juven Piranga reflected. “This difficult experience with the coronavirus — in which food and water security and lack of access to healthcare is becoming an urgent problem— is reminding us that we must rediscover our pride, and ancestral self-sustaining ways of thinking. We must clean ourselves of Western mindsets that have been polluting our youth and traditional social and spiritual structures.”

The hope is that moves back towards self-reliance during self-isolation will reduce the present dependence of many communities on external socioeconomic forces, such as with often compromising deals with governments, organizations and corporations, migratory labor and the selling of wild meat, fish and healthy traditional cultivars in nearby urban centers, and “ethnotourism” that brings expectant foreigners into their territories.

Despite these potentially positive long-term developments of strengthened Indigenous socio-cultural structures and self-sustenance, governments and the global community must not overlook pressing existential threats being faced by many Indigenous communities now, by COVID-19 itself and by violent actors such as illegal gold miners and loggers in the Amazon, who are likely to feel even more empowered during this period of global uncertainty and instability. Indigenous communities who are at risk from COVID-19 and/or violent and ideological intruders, must have their health and security guaranteed as they close off their autonomous territories to outsiders. 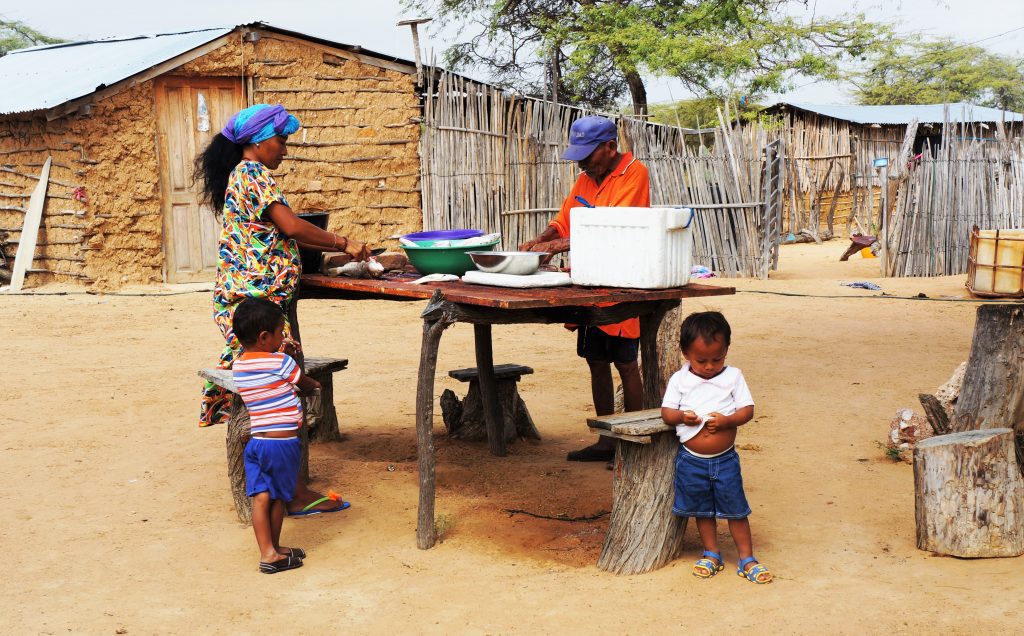 For the Wayuu ethnic group, women and elders are vital to their socio-cultural structures. La Guajira, Colombia. Photo by V. Circe.

Why should this matter to a world in the grips of a pandemic?

Indigenous people are vital and strategic partners in facing global socioeconomic, health and environmental challenges. They are the stewards of 80% of the world’s biodiversity, store more than 30 years’ worth of global carbon emissions above and below their collective lands, and account for the vast majority of surviving linguistic and cultural diversity. Furthermore, Indigenous elders harbor vast mental databases of empirical knowledge — of traditional medicines, lost and disappearing species, changing weather patterns and so much more.

Any tool or circumstance that enables Indigenous people to fortify their traditions, territories and practices, while carrying them into the next generations, will be of great benefit to the global community. The COVID-19 pandemic may just give the proper pretext to support this important process globally.

The Powerful Alliance Between Integrated Science and Traditional Food Systems