It was an unusual Calenda (traditional procession) even for Oaxaca, a city used to these colorful, musical and boisterous parades often led by giant puppets (monos) and a marching band for weddings, quinceañeras, and religious observances.  This specific Calenda was dedicated to the protection of the guardians of native corn, to defenders of ecological diversity, and to those protecting indigenous lands. The Calenda, a Native Corn Colloquium, and an indigenous corn performance by the All Species Project and the Mermejita Circus of Mazunte, Oaxaca, was a collaborative effort of seed and climate activists in February of 2020.

Mexico is becoming increasingly dangerous for environmental activists.  A recent example is the assassination of Homero Gómez Gonzáles in late January 2020.  Homero was a former logger in the state of Michoacán, who became one of Mexico’s strongest defenders of Monarch Butterflies. 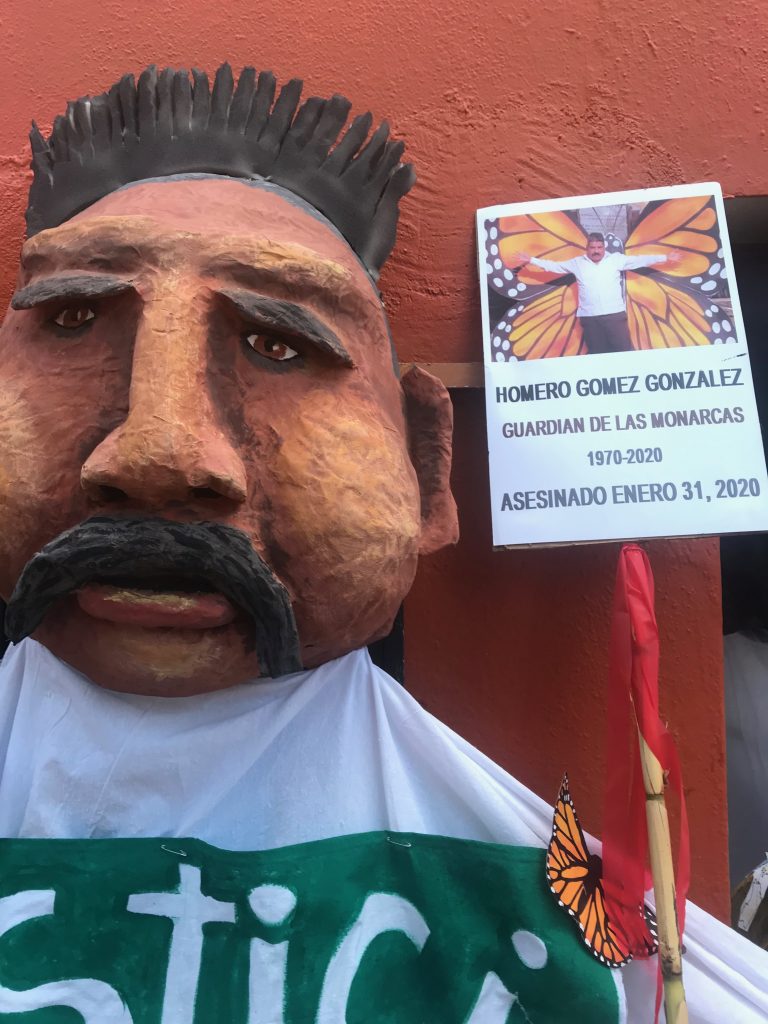 From time immemorial, millions of these extraordinary butterflies annually arrived in his region for their winter retreat.  Threatened by excessive logging, the natural habitat was finally designated a federally protected preserve, El Rosario Monarch Butterfly Biosphere Reserve.  Although legally protected, loggers were still continuing their advance on this precious environment.  Homero Gonzáles, and one week later a co-worker, Raul Hernández Romero, paid with their lives for guarding these beings.

Berta Cáceres has become a symbol of the resistance to exploitive industries and threats to indigenous cultures and land throughout the Americas. Co-founder of the Council of Popular and Indigenous Organizations of Honduras (COPINH), Berta organized around social and indigenous issues from feminism and LGBTQ rights to opposing logging practices and US military bases on indigenous Lenca land. 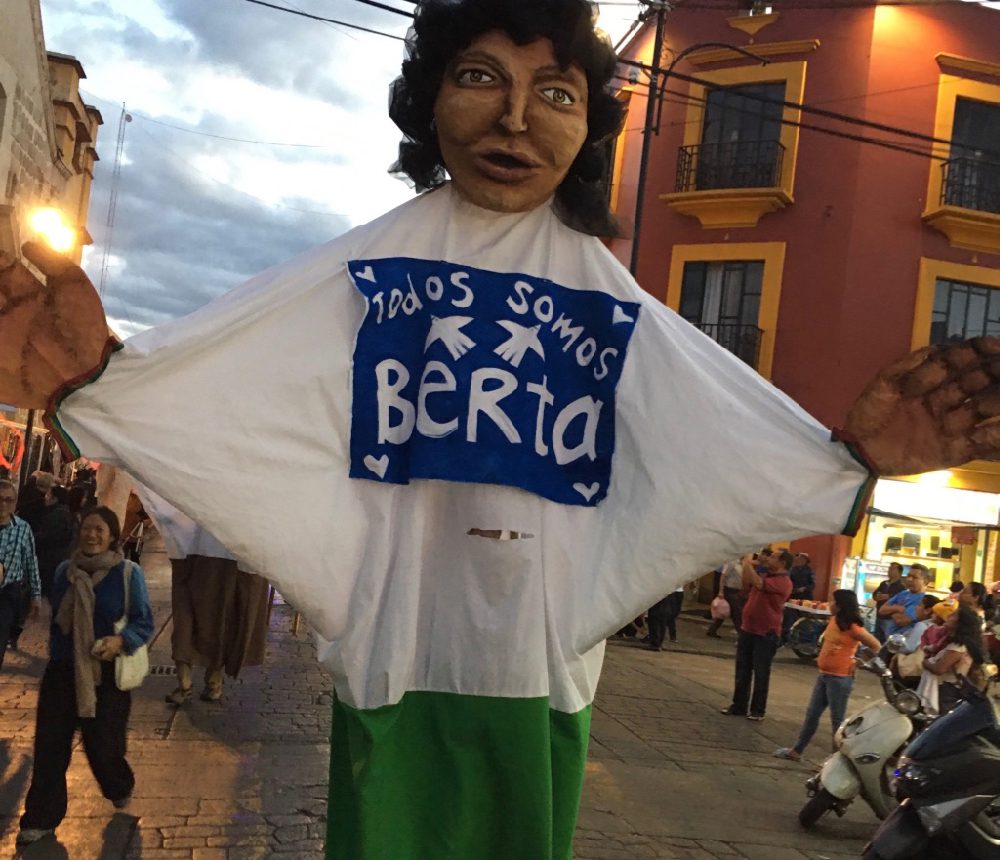 She led a year-long grassroots protest that prevented the building of a major dam on the Rio Gualcarque that threatened the Lenca people’s traditional way of life by limiting access to water, fuel and materials for medicines. Berta was assassinated in her home at age 44.

“They are afraid of us because we are not afraid of them.”— Berta Cáceres. 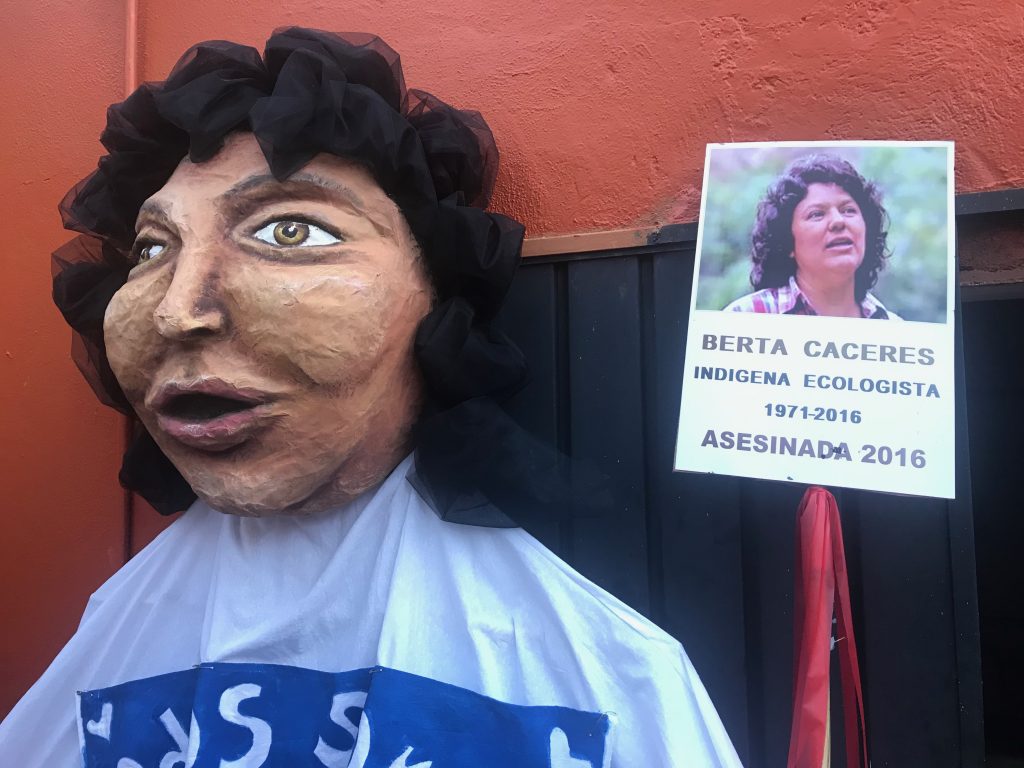 Cherán is a community, also in Michoacán, that has literally taken its land and community back from corruption, cartels, politicians, and their former police force.  Under environmental attack on all fronts from logging that stripped the forests of 200 to 250 truckloads of wood each day, this primarily indigenous Purépecha community rose up in 2011. 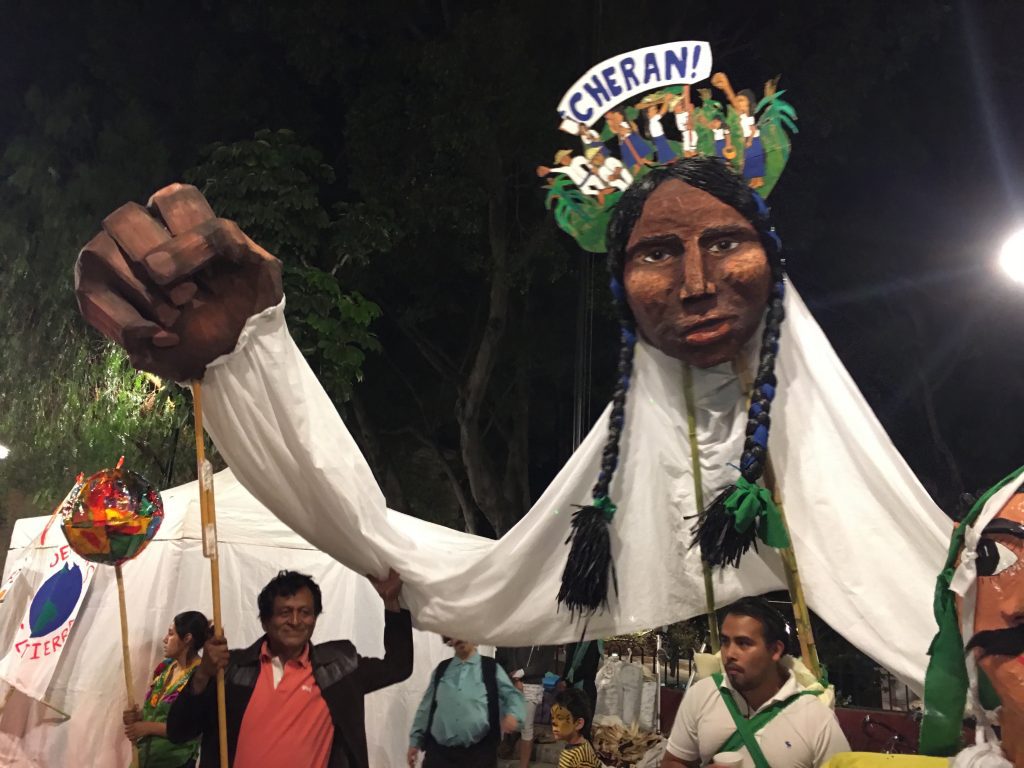 Women, concerned that a natural spring was being threatened by the logging, led the original actions.  Politicians, police, cartel activities, and loggers were forced out of Cherán. Their actions led to community self-governance, self-protection, and regenerative environmental practices. Hillsides are being replanted with stock from the city’s nurseries. Today, Cherán’s version of direct democracy is led by the Council of twelve elected officials (K’eri Jánaskakua) and 180 council fires (fogatas) through whom consensual decisions of all matters are made. We have much to learn from these guardians.

Perhaps for the first time in history, the state of Oaxaca is having to import corn.   The sad irony is that this Central Valley of Mexico region is considered to be the epicenter of the development of the gift of corn. 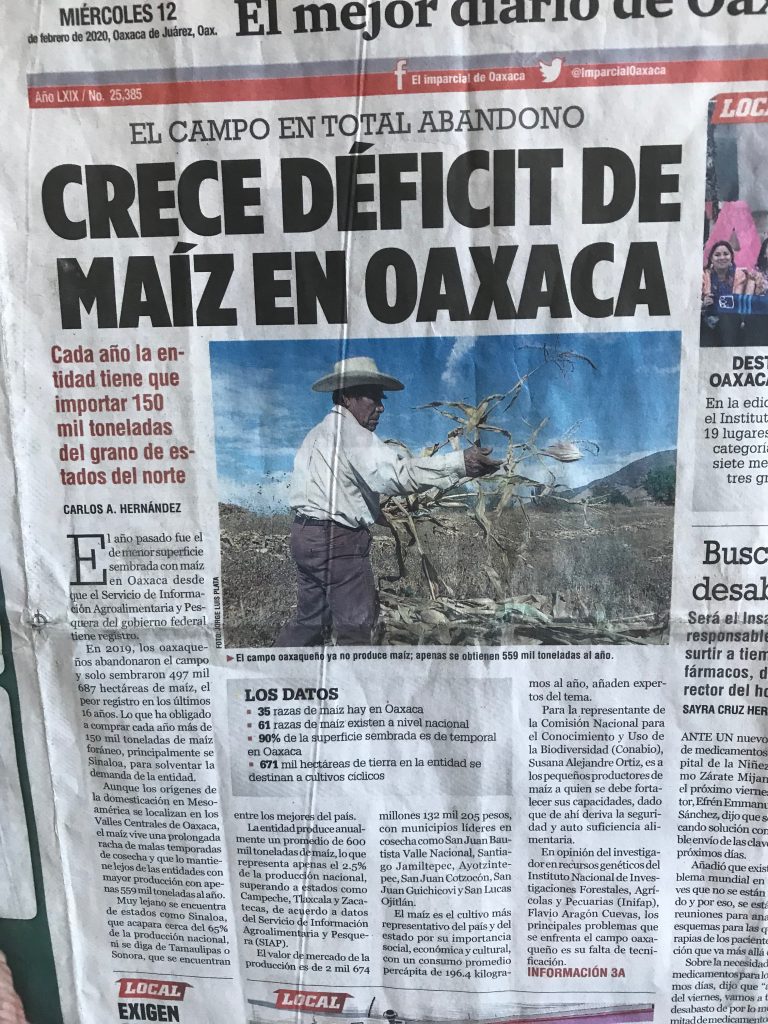 The earliest known evidence of maíze was found in a cave in Oaxaca. For over 6,000 years, the indigenous people of the Central Valley have cultivated and cared for a diversity of native seeds that included the domestication of the grass Teosinte into corn as we know it. 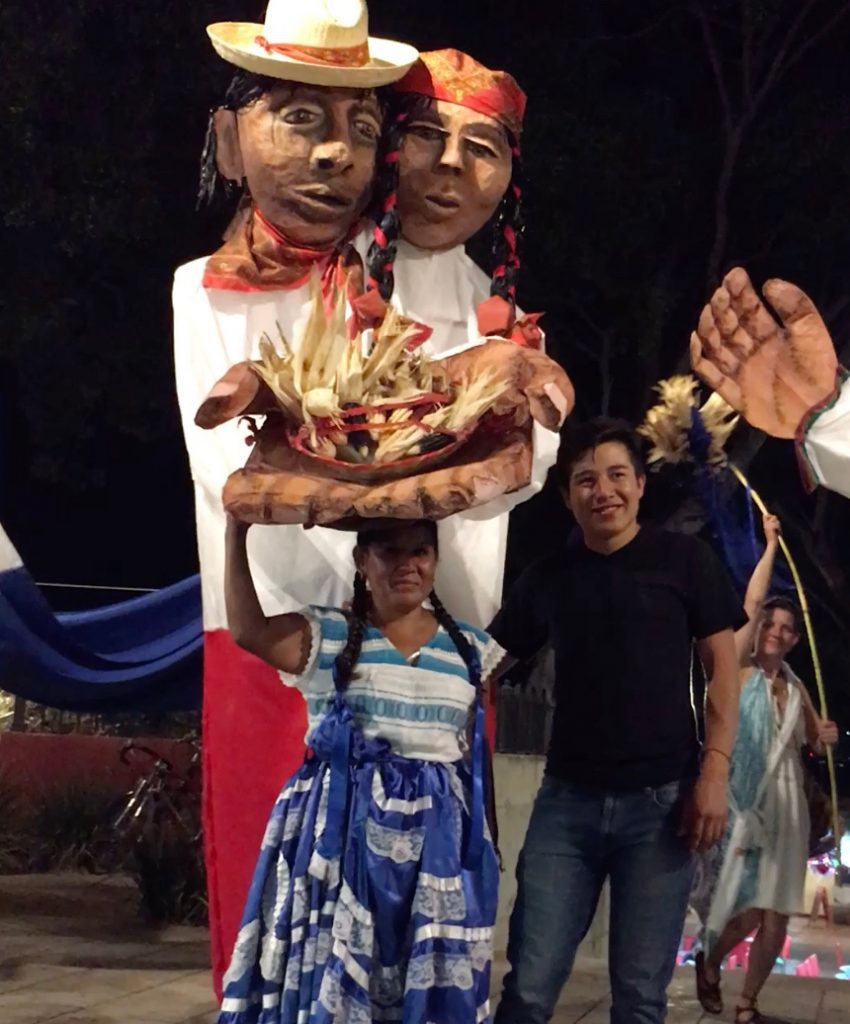 Due to climate change-driven drought, farmers this year were unable to produce the amount of crops necessary to feed and nourish their people. Samuel, a traditional weaver and farmer, reported that their community had only produced 10 to 20 percent of their usual crop this year due to late rains and drought.  Around Oaxaca City and in municipal buildings, campesinos from southern Oaxaca, driven north by climate, have taken refuge, are occupying buildings, and holding demonstrations demanding the government assist in helping them with basic necessities.

In a panel of campesinos and intellectuals led by Dr. Ana Ruiz Díaz, the need to protect native strands of indigenous corn and the growing of traditional milpas were highlighted as critical to cultural survival and sustainable agricultural practices.  Dr. Díaz and 52 other people filed a class action lawsuit in 2013 against five transnational corporations that use transgenic corn. They have obtained a court order that prohibits granting permits to plant transgenic corn in Mexican territory. Responding to the stress of climate disruptions, native seed advocates emphasize the need to maintain the ancient lineage of place-specific crops and the diversity of planting in milpas. 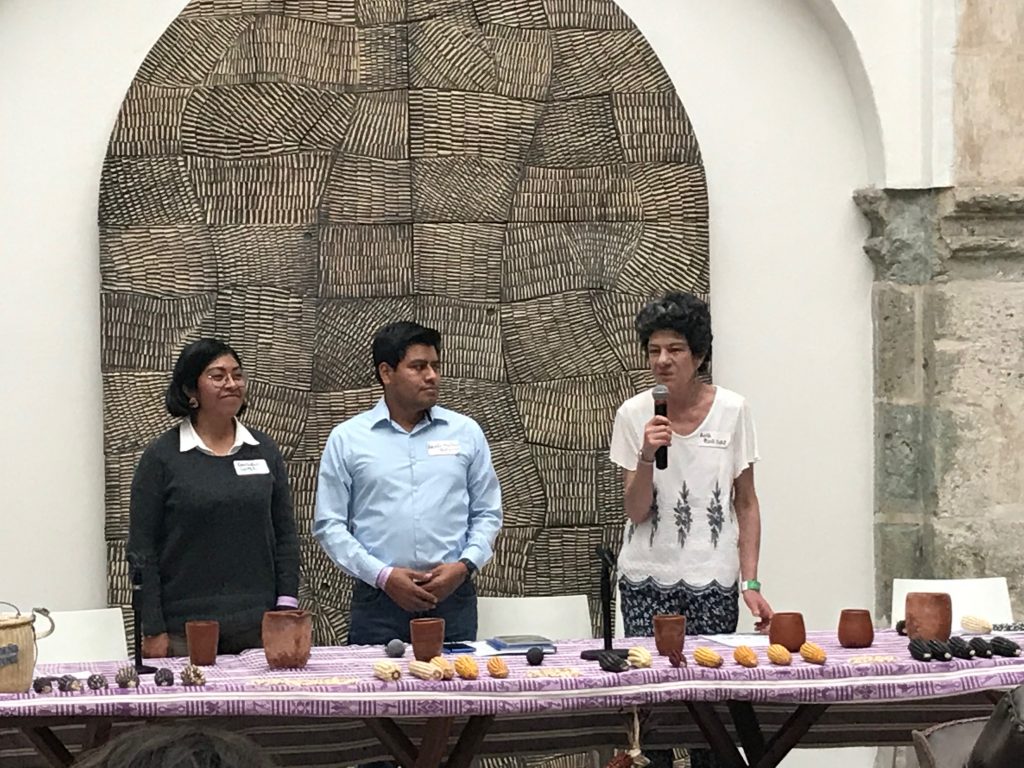 Summarizing what another indigenous corn expert, Sr. Amado Ramírez, told us, “The next revolution will be an ecological revolution, one spoken through the poets and artists, based upon the symbolic power of corn, and led through the kitchen.” 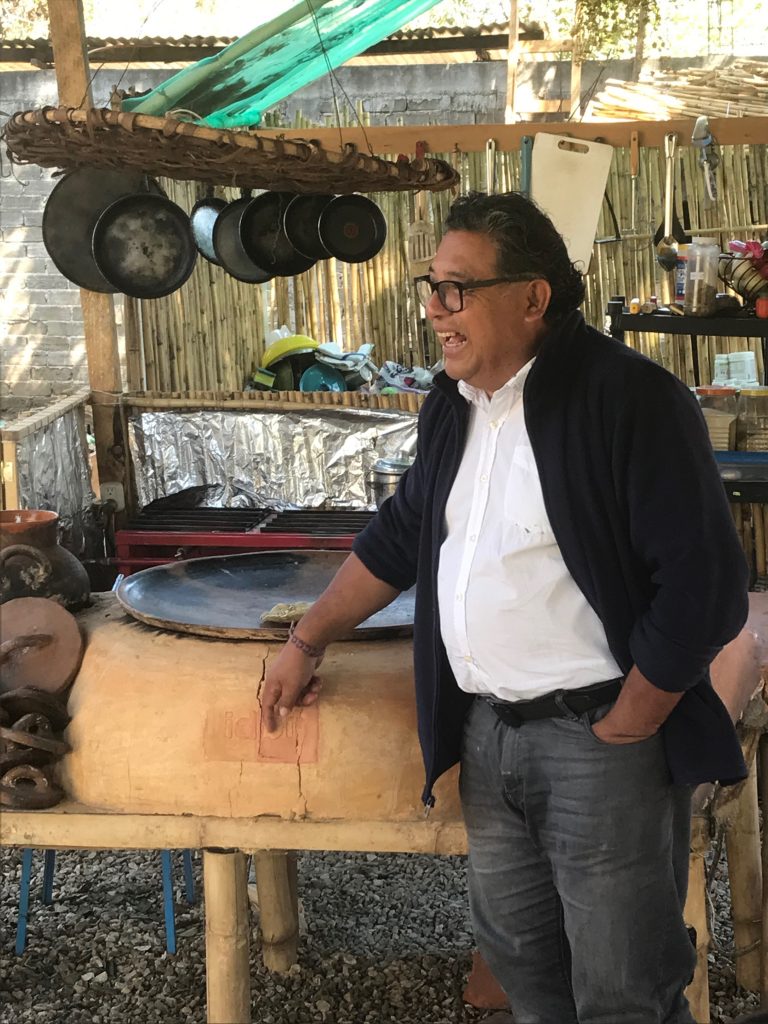 The Search For A New Community COVID-19 and a New New Deal